Salmonella is one of the most common food-borne pathogens. It can be transmitted between chickens, as well as to people by contaminated poultry products. In our study, we distinguished chickens with different resistances mainly based on bacterial loads. We compared the cecal tonsil transcriptomes between the susceptible and resistant chickens after Salmonella infection, aiming to identify the crucial genes participating in the antibacterial activity in the cecal tonsil. A total of 3214 differentially expressed genes (DEGs), including 2092 upregulated and 1122 downregulated genes, were identified between the two groups (fold change ≥ 2.0, padj < 0.05). Many DEGs were mainly involved in the regulation of two biological processes: crosstalk between the cecal tonsil epithelium and pathogenic bacteria, such as focal adhesion, extracellular-matrix–receptor interaction, and regulation of the actin cytoskeleton and host immune response including the cytokine–receptor interaction. In particular, the challenged resistant birds exhibited strong activation of the intestinal immune network for IgA production, which perhaps contributed to the resistance to Salmonella infection. These findings give insight into the mRNA profile of the cecal tonsil between the two groups after initial Salmonella stimulation, which may extend the known complexity of molecular mechanisms in chicken immune response to Salmonella. View Full-Text
Keywords: cecal tonsil; transcriptome; Salmonella; chicken; susceptibility cecal tonsil; transcriptome; Salmonella; chicken; susceptibility
►▼ Show Figures 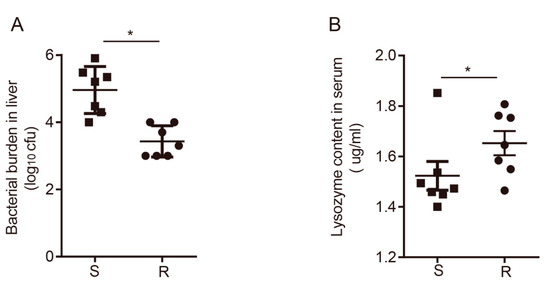