The Versatility of SMRT Sequencing

A high-quality reference genome is a fundamental resource for functional genetics, comparative genomics, and population genomics, and is increasingly important for conservation biology. PacBio Single Molecule, Real-Time (SMRT) sequencing generates long reads with uniform coverage and high consensus accuracy, making it a powerful technology for de novo genome assembly. Improvements in throughput and concomitant reductions in cost have made PacBio an attractive core technology for many large genome initiatives, however, relatively high DNA input requirements (~5 µg for standard library protocol) have placed PacBio out of reach for many projects on small organisms that have lower DNA content, or on projects with limited input DNA for other reasons. Here we present a high-quality de novo genome assembly from a single Anopheles coluzzii mosquito. A modified SMRTbell library construction protocol without DNA shearing and size selection was used to generate a SMRTbell library from just 100 ng of starting genomic DNA. The sample was run on the Sequel System with chemistry 3.0 and software v6.0, generating, on average, 25 Gb of sequence per SMRT Cell with 20 h movies, followed by diploid de novo genome assembly with FALCON-Unzip. The resulting curated assembly had high contiguity (contig N50 3.5 Mb) and completeness (more than 98% of conserved genes were present and full-length). In addition, this single-insect assembly now places 667 (>90%) of formerly unplaced genes into their appropriate chromosomal contexts in the AgamP4 PEST reference. We were also able to resolve maternal and paternal haplotypes for over 1/3 of the genome. By sequencing and assembling material from a single diploid individual, only two haplotypes were present, simplifying the assembly process compared to samples from multiple pooled individuals. The method presented here can be applied to samples with starting DNA amounts as low as 100 ng per 1 Gb genome size. This new low-input approach puts PacBio-based assemblies in reach for small highly heterozygous organisms that comprise much of the diversity of life. View Full-Text
Keywords: low-input DNA; de novo genome assembly; long-read SMRT sequencing; mosquito low-input DNA; de novo genome assembly; long-read SMRT sequencing; mosquito
►▼ Show Figures 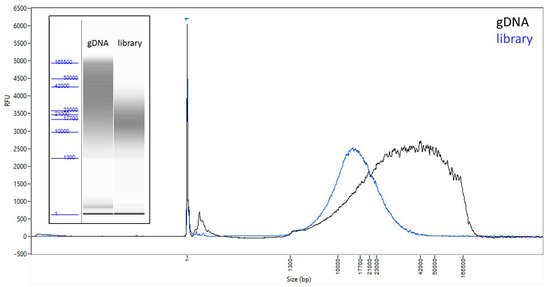