The extensive anthropogenic use of platinum, a rare element found in low natural abundance in the Earth’s continental crust and one of the critical raw materials in the EU innovation partnership framework, has resulted in increased concentrations in surface environments. To minimize its spread and increase its recovery from the environment, biological recovery via different microbial systems is explored. In contrast, studies focusing on the effects of prolonged exposure to Pt are limited. In this study, we used the metal-resistant Cupriavidus metallidurans NA4 strain to explore the adaptation of environmental bacteria to platinum exposure. We used a combined Nanopore–Illumina sequencing approach to fully resolve all six replicons of the C. metallidurans NA4 genome, and compared them with the C. metallidurans CH34 genome, revealing an important role in metal resistance for its chromid rather than its megaplasmids. In addition, we identified the genomic and transcriptomic changes in a laboratory-evolved strain, displaying resistance to 160 µM Pt4+. The latter carried 20 mutations, including a large 69.9 kb deletion in its plasmid pNA4_D (89.6 kb in size), and 226 differentially-expressed genes compared to its parental strain. Many membrane-related processes were affected, including up-regulation of cytochrome c and a lytic transglycosylase, down-regulation of flagellar and pili-related genes, and loss of the pNA4_D conjugative machinery, pointing towards a significant role in the adaptation to platinum. View Full-Text
Keywords: platinum resistance; RNA-Seq; multireplicon; Nanopore; adaptive laboratory evolution platinum resistance; RNA-Seq; multireplicon; Nanopore; adaptive laboratory evolution
►▼ Show Figures 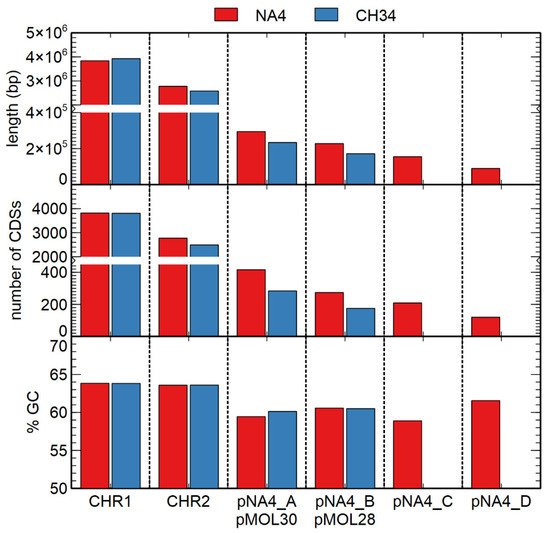