Few data-driven metabolomic approaches have been reported in sickle cell disease (SCD) to date. We performed a metabo-lipidomic study on the plasma and red blood cells of a steady-state mouse model carrying the homozygous human hemoglobin SS, compared with AS and AA genotypes. Among the 188 metabolites analyzed by a targeted quantitative metabolomic approach, 153 and 129 metabolites were accurately measured in the plasma and red blood cells, respectively. Unsupervised PCAs (principal component analyses) gave good spontaneous discrimination between HbSS and controls, and supervised OPLS-DAs (orthogonal partial least squares-discriminant analyses) provided highly discriminant models. These models confirmed the well-known deregulation of nitric oxide synthesis in the HbSS genotype, involving arginine deficiency and increased levels of dimethylarginines, ornithine, and polyamines. Other discriminant metabolites were newly evidenced, such as hexoses, alpha-aminoadipate, serotonin, kynurenine, and amino acids, pointing to a glycolytic shift and to the alteration of metabolites known to be involved in nociceptive pathways. Sharp remodeling of lysophosphatidylcholines, phosphatidylcholines, and sphingomyelins was evidenced in red blood cells. Our metabolomic study provides an overview of the metabolic remodeling induced by the sickle genotype in the plasma and red blood cells, revealing a biological fingerprint of altered nitric oxide, bioenergetics and nociceptive pathways. View Full-Text
Keywords: metabolomics; lipidomics; nociception; sickle cell disease metabolomics; lipidomics; nociception; sickle cell disease
►▼ Show Figures 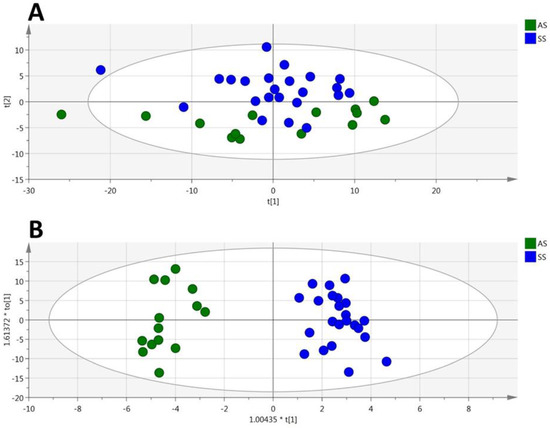