Human and murine studies identified the lysosomal enzyme acid sphingomyelinase (ASM) as a target for antidepressant therapy and revealed its role in the pathophysiology of major depression. In this study, we generated a mouse model with overexpression of Asm (Asm-tgfb) that is restricted to the forebrain to rule out any systemic effects of Asm overexpression on depressive-like symptoms. The increase in Asm activity was higher in male Asm-tgfb mice than in female Asm-tgfb mice due to the breeding strategy, which allows for the generation of wild-type littermates as appropriate controls. Asm overexpression in the forebrain of male mice resulted in a depressive-like phenotype, whereas in female mice, Asm overexpression resulted in a social anxiogenic-like phenotype. Ceramides in male Asm-tgfb mice were elevated specifically in the dorsal hippocampus. mRNA expression analyses indicated that the increase in Asm activity affected other ceramide-generating pathways, which might help to balance ceramide levels in cortical brain regions. This forebrain-specific mouse model offers a novel tool for dissecting the molecular mechanisms that play a role in the pathophysiology of major depression. View Full-Text
Keywords: Smpd1; acid sphingomyelinase; forebrain; depressive-like behavior; anxiety-like behavior; ceramide Smpd1; acid sphingomyelinase; forebrain; depressive-like behavior; anxiety-like behavior; ceramide
►▼ Show Figures 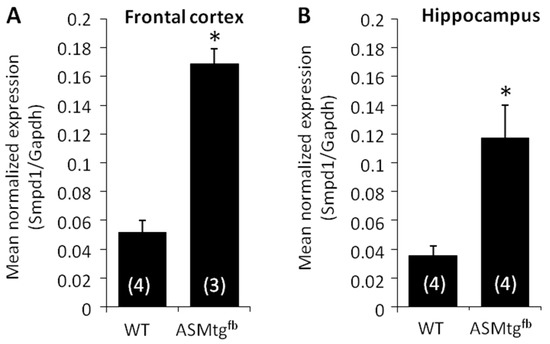