Autophagy is a key cellular process that involves constituent degradation and recycling during cellular development and homeostasis. Autophagy also plays key roles in antimicrobial host defense and numerous pathogenic organisms have developed strategies to take advantage of and/or modulate cellular autophagy. Several pharmacologic compounds, such as BafilomycinA1, an autophagy inducer, and Rapamycin, an autophagy inhibitor, have been used to modulate autophagy, and their effects upon notable autophagy markers, such as LC3 protein lipidation and Sequestosome-1/p62 alterations are well defined. We sought to understand whether such autophagy modulators have a more global effect upon host cells and used a recently developed aptamer-based proteomic platform (SOMAscan®) to examine 1305 U-251 astrocytic cell proteins after the cells were treated with each compound. These analyses, and complementary cytokine array analyses of culture supernatants after drug treatment, revealed substantial perturbations in the U-251 astrocyte cellular proteome. Several proteins, including cathepsins, which have a role in autophagy, were differentially dysregulated by the two drugs as might be expected. Many proteins, not previously known to be involved in autophagy, were significantly dysregulated by the compounds, and several, including lactadherin and granulins, were up-regulated by both drugs. These data indicate that these two compounds, routinely used to help dissect cellular autophagy, have much more profound effects upon cellular proteins. View Full-Text
Keywords: cell responses; autophagy; BafilomycinA1; Rapamycin; aptamers; bioinformatics cell responses; autophagy; BafilomycinA1; Rapamycin; aptamers; bioinformatics
►▼ Show Figures 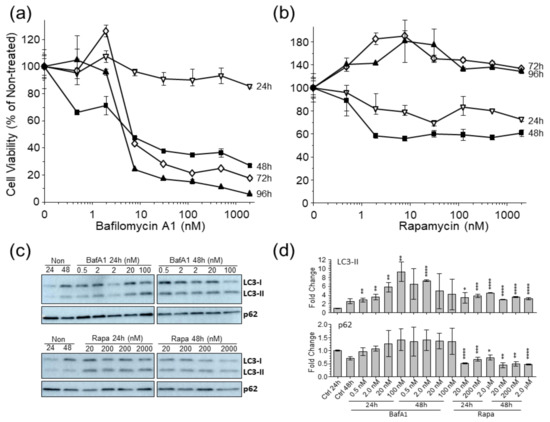