The garden pea (Pisum sativum L.) is a legume crop of immense economic value. Extensive breeding has led to the emergence of numerous pea varieties, of which some are distinguished by accelerated development in various stages of ontogenesis. One such trait is rapid seed maturation, which, despite novel insights into the genetic control of seed development in legumes, remains poorly studied. This article presents an attempt to dissect mechanisms of early maturation in the pea line Sprint-2 by means of whole transcriptome RNA sequencing in two developmental stages. By using a de novo assembly approach, we have obtained a reference transcriptome of 25,756 non-redundant entries expressed in pea seeds at either 10 or 20 days after pollination. Differential expression in Sprint-2 seeds has affected 13,056 transcripts. A comparison of the two pea lines with a common maturation rate demonstrates that while at 10 days after pollination, Sprint-2 seeds show development retardation linked to intensive photosynthesis, morphogenesis, and cell division, and those at 20 days show a rapid onset of desiccation marked by the cessation of translation and cell anabolism and accumulation of dehydration-protective and -storage moieties. Further inspection of certain transcript functional categories, including the chromatin constituent, transcription regulation, protein turnover, and hormonal regulation, has revealed transcriptomic trends unique to specific stages and cultivars. Among other remarkable features, Sprint-2 demonstrated an enhanced expression of transposable element-associated open reading frames and an altered expression of major maturation regulators and DNA methyltransferase genes. To the best of our knowledge, this is the first comparative transcriptomic study in which the issue of the seed maturation rate is addressed. View Full-Text
Keywords: garden pea; Pisum sativum L.; Sprint-2; seed; transcriptome; maturation; early maturation; desiccation; transcription; transposable element garden pea; Pisum sativum L.; Sprint-2; seed; transcriptome; maturation; early maturation; desiccation; transcription; transposable element
►▼ Show Figures 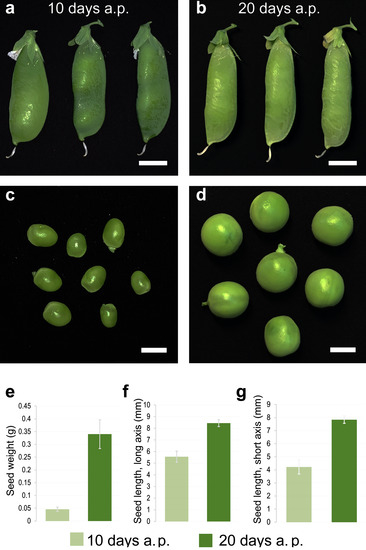