Heme, A Metabolic Sensor, Directly Regulates the Activity of the KDM4 Histone Demethylase Family and Their Interactions with Partner Proteins
Previous Article in Special Issue

Lamin A and Prelamin a Counteract Migration of Osteosarcoma Cells

A type lamins are fundamental components of the nuclear lamina. Changes in lamin A expression correlate with malignant transformation in several cancers. However, the role of lamin A has not been explored in osteosarcoma (OS). Here, we wanted to investigate the role of lamin A in normal osteoblasts (OBs) and OS cells. Thus, we studied the expression of lamin A/C in OS cells compared to OBs and evaluated the effects of lamin A overexpression in OS cell lines. We show that, while lamin A expression increases during osteoblast differentiation, all examined OS cell lines express lower lamin A levels relative to differentiated OBs. The condition of low LMNA expression confers to OS cells a significant increase in migration potential, while overexpression of lamin A reduces migration ability of OS cells. Moreover, overexpression of unprocessable prelamin A also reduces cell migration. In agreement with the latter finding, OS cells which accumulate the highest prelamin A levels upon inhibition of lamin A maturation by statins, had significantly reduced migration ability. Importantly, OS cells subjected to statin treatment underwent apoptotic cell death in a RAS-independent, lamin A-dependent manner. Our results show that pro-apoptotic effects of statins and statin inhibitory effect on OS cell migration are comparable to those obtained by prelamin A accumulation and further suggest that modulation of lamin A expression and post-translational processing can be a tool to decrease migration potential in OS cells. View Full-Text
Keywords: osteosarcoma; lamin A; cellular migration; LMNA gene; osteoblast differentiation osteosarcoma; lamin A; cellular migration; LMNA gene; osteoblast differentiation
►▼ Show Figures 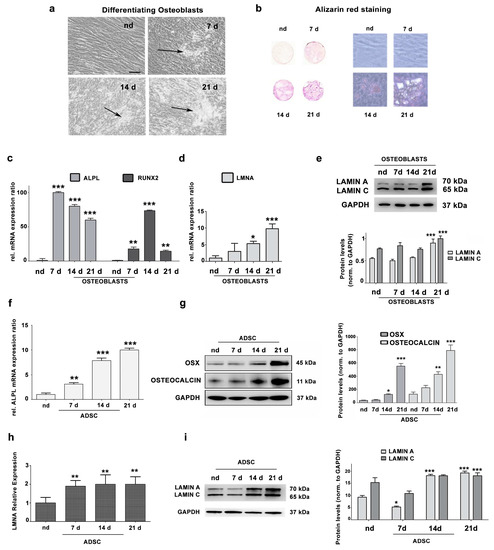