During the development of the central nervous system, the proliferation of neural progenitors and differentiation of neurons and glia are tightly regulated by different transcription factors and signaling cascades, such as the Wnt and Shh pathways. This process takes place in cooperation with several microRNAs, some of which evolutionarily conserved in vertebrates, from teleosts to mammals. We focused our attention on miR-7, as its role in the regulation of cell signaling during neural development is still unclear. Specifically, we used human stem cell cultures and whole zebrafish embryos to study, in vitro and in vivo, the role of miR-7 in the development of dopaminergic (DA) neurons, a cell type primarily affected in Parkinson’s disease. We demonstrated that the zebrafish homologue of miR-7 (miR-7a) is expressed in the forebrain during the development of DA neurons. Moreover, we identified 143 target genes downregulated by miR-7, including the neural fate markers TCF4 and TCF12, as well as the Wnt pathway effector TCF7L2. We then demonstrated that miR-7 negatively regulates the proliferation of DA-progenitors by inhibiting Wnt/β-catenin signaling in zebrafish embryos. In parallel, miR-7 positively regulates Shh signaling, thus controlling the balance between oligodendroglial and DA neuronal cell fates. In summary, this study identifies a new molecular cross-talk between Wnt and Shh signaling pathways during the development of DA-neurons. Being mediated by a microRNA, this mechanism represents a promising target in cell differentiation therapies for Parkinson’s disease. View Full-Text
Keywords: miR-7; zebrafish; Wnt; Shh; Tcf; dopaminergic neurons; oligodendrocytes; glia miR-7; zebrafish; Wnt; Shh; Tcf; dopaminergic neurons; oligodendrocytes; glia
►▼ Show Figures 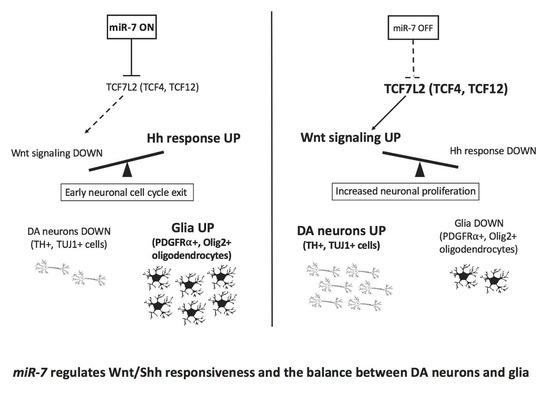