GUN1 (genomes uncoupled 1), a chloroplast-localized pentatricopeptide repeat (PPR) protein with a C-terminal small mutS-related (SMR) domain, plays a central role in the retrograde communication of chloroplasts with the nucleus. This flow of information is required for the coordinated expression of plastid and nuclear genes, and it is essential for the correct development and functioning of chloroplasts. Multiple genetic and biochemical findings indicate that GUN1 is important for protein homeostasis in the chloroplast; however, a clear and unified view of GUN1′s role in the chloroplast is still missing. Recently, GUN1 has been reported to modulate the activity of the nucleus-encoded plastid RNA polymerase (NEP) and modulate editing of plastid RNAs upon activation of retrograde communication, revealing a major role of GUN1 in plastid RNA metabolism. In this opinion article, we discuss the recently identified links between plastid RNA metabolism and retrograde signaling by providing a new and extended concept of GUN1 activity, which integrates the multitude of functional genetic interactions reported over the last decade with its primary role in plastid transcription and transcript editing. View Full-Text
Keywords: GUN1; RNA polymerase; transcript accumulation; transcript editing; retrograde signaling GUN1; RNA polymerase; transcript accumulation; transcript editing; retrograde signaling
►▼ Show Figures 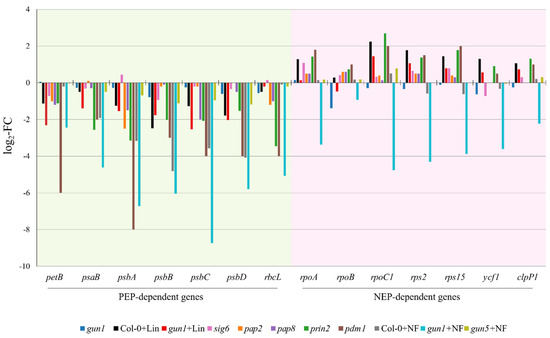