O-linked β-N-acetylglucosamine (O-GlcNAc) modification regulates the activity of hundreds of nucleocytoplasmic proteins involved in a wide variety of cellular processes, such as gene expression, signaling, and cell growth; however, the mechanism underlying the regulation of B cell development and function by O-GlcNAcylation remains largely unknown. Here, we demonstrate that changes in cellular O-GlcNAc levels significantly affected the growth of pre-B cells, which rapidly proliferate to allow expansion of functional clones that express successfully rearranged heavy chains at the pro-B stage during early B cell development. In our study, the overall O-GlcNAc levels in these proliferative pre-B cells, which are linked to the glucose uptake rate, were highly induced when compared with those in pro-B cells. Thus, pharmacologically, genetically, or nutritionally, inhibition of O-GlcNAcylation in pre-B cells markedly downregulated c-Myc expression, resulting in cell cycle arrest via blockade of cyclin expression. Importantly, the population of B cells after the pro-B cell stage in mouse bone marrow was severely impaired by the administration of an O-GlcNAc inhibitor. These results strongly suggest that O-GlcNAcylation-dependent expression of c-Myc represents a new regulatory component of pre-B cell proliferation, as well as a potential therapeutic target for the treatment of pre-B cell-derived leukemia. View Full-Text
Keywords: O-GlcNAcylation; pre-B cell; proliferation; c-Myc O-GlcNAcylation; pre-B cell; proliferation; c-Myc
►▼ Show Figures 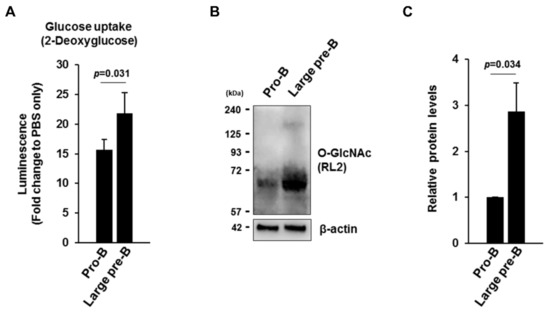