Mucoepidermoid carcinoma (MEC) is the most common tumor in the salivary glands, often presenting with recurrence and metastasis due to its high invasive capacity. Metallothionein (MT), a zinc storage protein that supplies this element for protease activity, is probably related to mucoepidermoid carcinoma behavior. This prompted us to characterize a cell line derived from mucoepidermoid carcinoma and to correlate metallothionein expression with transforming growth factor-α (TGF-α), tumor necrosis factor-α (TNF-α) and matrix metalloproteinases (MMPs). Transcriptomic analysis and cytogenetic assays were performed to detect the expression of genes of interest and cellular chromosomal alterations, respectively. MEC cells with a depleted metallothionein 2A (MT2A) gene were subjected to Western blot to correlate metallothionein expression with growth factors and MMPs. Additionally, cells with depleted MT were subjected to migration and invasion assays. The transcriptomic study revealed reads mapped to cytokeratins 19 and AE1/AE3, α-smooth muscle actin, vimentin, and fibronectin. Cytogenetic evaluation demonstrated structural and numerical alterations, including the translocation t(11;19)(q21;p13), characteristic of MEC. Metallothionein depletion was correlated with the decreased expression of TGF-α and MMP-9, while TNF-α protein levels were augmented. Migration and invasion activity were diminished after metallothionein silencing. Our findings suggest an important role of MT in MEC invasion, through the regulation of proteins involved in this process. View Full-Text
Keywords: mucoepidermoid carcinoma; metallothionein; matrix metalloproteinases; extracellular matrix; salivary glands mucoepidermoid carcinoma; metallothionein; matrix metalloproteinases; extracellular matrix; salivary glands
►▼ Show Figures 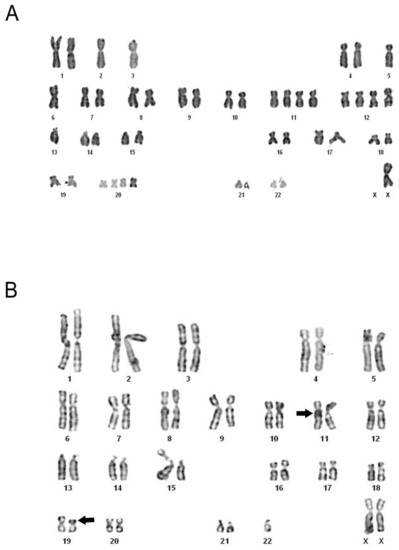