Sterculic Acid: The Mechanisms of Action beyond Stearoyl-CoA Desaturase Inhibition and Therapeutic Opportunities in Human Diseases

In many tissues, stearoyl-CoA desaturase 1 (SCD1) catalyzes the biosynthesis of monounsaturated fatty acids (MUFAS), (i.e., palmitoleate and oleate) from their saturated fatty acid (SFA) precursors (i.e., palmitate and stearate), influencing cellular membrane physiology and signaling, leading to broad effects on human physiology. In addition to its predominant role in lipid metabolism and body weight control, SCD1 has emerged recently as a potential new target for the treatment for various diseases, such as nonalcoholic steatohepatitis, Alzheimer’s disease, cancer, and skin disorders. Sterculic acid (SA) is a cyclopropene fatty acid originally found in the seeds of the plant Sterculia foetida with numerous biological activities. On the one hand, its ability to inhibit stearoyl-CoA desaturase (SCD) allows its use as a coadjuvant of several pathologies where this enzyme has been associated. On the other hand, additional effects independently of its SCD inhibitory properties, involve anti-inflammatory and protective roles in retinal diseases such as age-related macular degeneration (AMD). This review aims to summarize the mechanisms by which SA exerts its actions and to highlight the emerging areas where this natural compound may be of help for the development of new therapies for human diseases. View Full-Text
Keywords: sterculic acid; inflammation; cell death; macular degeneration; metabolism sterculic acid; inflammation; cell death; macular degeneration; metabolism
►▼ Show Figures 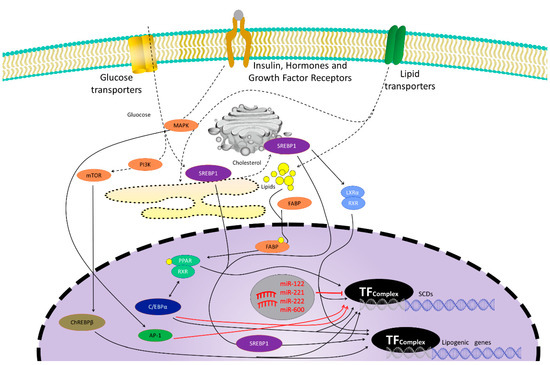