The nucleolus is a distinct sub-cellular compartment structure in the nucleus. First observed more than 200 years ago, the nucleolus is detectable by microscopy in eukaryotic cells and visible during the interphase as a sub-nuclear structure immersed in the nucleoplasm, from which it is not separated from any membrane. A huge number of studies, spanning over a century, have identified ribosome biogenesis as the main function of the nucleolus. Recently, novel functions, independent from ribosome biogenesis, have been proposed by several proteomic, genomic, and functional studies. Several works have confirmed the non-canonical role for nucleoli in regulating important cellular processes including genome stability, cell-cycle control, the cellular senescence, stress responses, and biogenesis of ribonucleoprotein particles (RNPs). Many authors have shown that both canonical and non-canonical functions of the nucleolus are associated with several cancer-related processes. The association between the nucleolus and cancer, first proposed by cytological and histopathological studies showing that the number and shape of nucleoli are commonly altered in almost any type of cancer, has been confirmed at the molecular level by several authors who demonstrated that numerous mechanisms occurring in the nucleolus are altered in tumors. Recently, therapeutic approaches targeting the nucleolus in cancer have started to be considered as an emerging “hallmark” of cancer and several therapeutic interventions have been developed. This review proposes an up-to-date overview of available strategies targeting the nucleolus, focusing on novel targeted therapeutic approaches. Finally, a target-based classification of currently available treatment will be proposed. View Full-Text
Keywords: nucleolar stress; p53; ribosomal proteins; cancer; uL3; cancer chemotherapy; nucleolus nucleolar stress; p53; ribosomal proteins; cancer; uL3; cancer chemotherapy; nucleolus
►▼ Show Figures 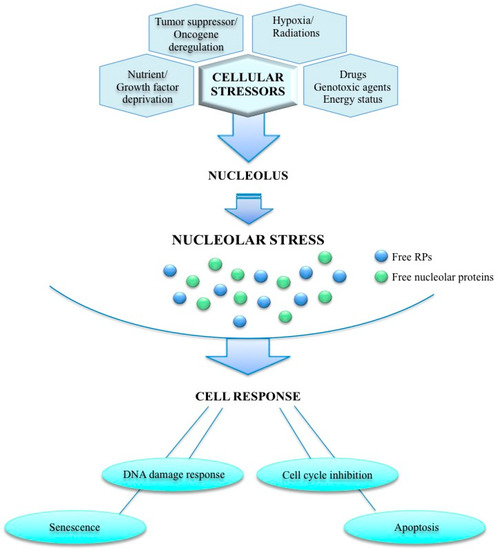