The aim of the present work was to address the role of BMP9 in different genetic backgrounds (C57BL/6, BALB/c, and 129/Ola) of mice deleted for Bmp9. We found that Bmp9 deletion led to premature mortality only in the 129/Ola strain. We have previously shown that Bmp9 deletion led to liver sinusoidal endothelial cells (LSEC) capillarization and liver fibrosis in the 129/Ola background. Here, we showed that this is not the case in the C57BL/6 background. Analysis of LSEC from Wild-type (WT) versus Bmp9-KO mice in the C57BL/6 background showed no difference in LSEC fenestration and in the expression of differentiation markers. Comparison of the mRNA expression of LSEC differentiation markers between WT C57BL/6 and 129/Ola mice showed a significant decrease in Stabilin2, Plvap, and CD209b, suggesting a more capillary-like phenotype in WT C57BL/6 LSECs. C57BL/6 mice also had lower BMP9 circulating concentrations and hepatic Vegfr2 mRNA levels, compared to the 129/Ola mice. Taken together, our observations support a role for BMP9 in liver endothelial cell fenestration and prevention of fibrosis that is dependent on genetic background. It also suggests that 129/Ola mice are a more suitable model than C57BL/6 for the study of liver fibrosis subsequent to LSEC capillarization. View Full-Text
Keywords: BMP9; genetic background; liver; fibrosis; capillarization; liver sinusoidal endothelial cells; HHT; mouse; fenestrae; plvap BMP9; genetic background; liver; fibrosis; capillarization; liver sinusoidal endothelial cells; HHT; mouse; fenestrae; plvap
►▼ Show Figures 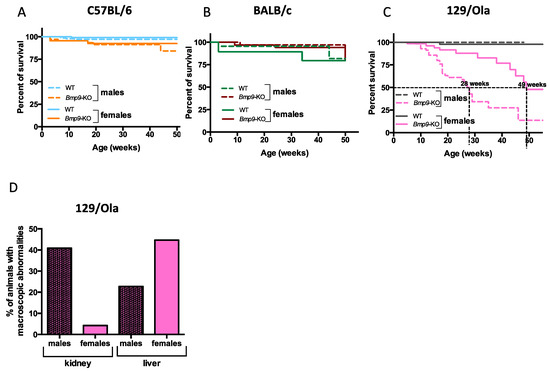