Overview of Extracellular Vesicles, Their Origin, Composition, Purpose, and Methods for Exosome Isolation and Analysis
Next Article in Special Issue

Interplay between Zika Virus and Peroxisomes during Infection

Chronic inflammation and oxidative stress are common and co-substantial pathological processes accompanying and contributing to cancers. Numerous epidemiological studies have indicated that non-steroidal anti-inflammatory drugs (NSAIDs) could have a positive effect on both the prevention of cancer and tumor therapy. Numerous hypotheses have postulated that NSAIDs could slow tumor growth by acting on both chronic inflammation and oxidative stress. This review takes a closer look at these hypotheses. In the cancer process, one of the major signaling pathways involved is the WNT/β-catenin pathway, which appears to be upregulated. This pathway is closely associated with both chronic inflammation and oxidative stress in cancers. The administration of NSAIDs has been observed to help in the downregulation of the WNT/β-catenin pathway and thus in the control of tumor growth. NSAIDs act as PPARγ agonists. The WNT/β-catenin pathway and PPARγ act in opposing manners. PPARγ agonists can promote cell cycle arrest, cell differentiation, and apoptosis, and can reduce inflammation, oxidative stress, proliferation, invasion, and cell migration. In parallel, the dysregulation of circadian rhythms (CRs) contributes to cancer development through the upregulation of the canonical WNT/β-catenin pathway. By stimulating PPARγ expression, NSAIDs can control CRs through the regulation of many key circadian genes. The administration of NSAIDs in cancer treatment would thus appear to be an interesting therapeutic strategy, which acts through their role in regulating WNT/β-catenin pathway and PPARγ activity levels. View Full-Text
Keywords: non-steroidal anti-inflammatory drug; cancer; WNT; inflammation; oxidative stress; PPARγ non-steroidal anti-inflammatory drug; cancer; WNT; inflammation; oxidative stress; PPARγ
►▼ Show Figures 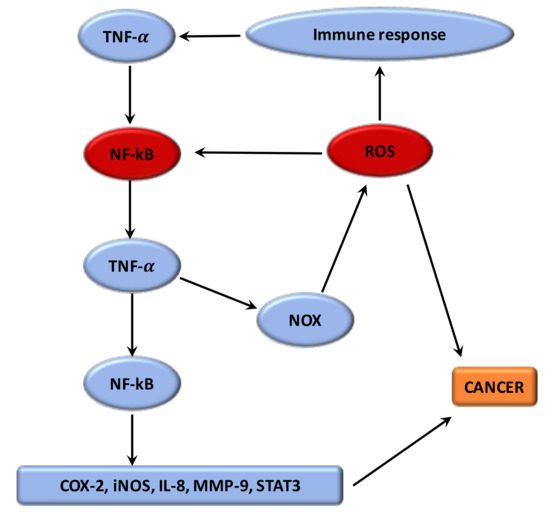