Grb7, a Critical Mediator of EGFR/ErbB Signaling, in Cancer Development and as a Potential Therapeutic Target

Analysis of Genetic Alterations in Tunisian Patients with Lung Adenocarcinoma

The identification of the mutations that drive lung cancer have furnished new targets for the treatment of non-small cell lung cancer (NSCLC) and led to the development of targeted therapies such as tyrosine kinase inhibitors that are used to combat the molecular changes promoting cancer progression. Furthermore, biomarkers identified from gene analysis can be used to detect early lung cancer, determine patient prognosis, and monitor response to therapy. In the present study we analyzed the molecular profile of seventy-three Tunisian patients with lung adenocarcinoma (LAD). Mutational analyses for EGFR and KRAS were performed using direct sequencing, immunohistochemistry or MassARRAY. Anaplastic lymphoma kinase (ALK) rearrangement was evaluated by immunohistochemistry using the D5F3 clone, and p53 expression was also assessed. The median age of patients at diagnosis was 61 years (range 23–82 years). Using different methodologies, EGFR mutations were found in 5.47% of patients and only exon 19 deletions “E746-A750 del” were detected. KRAS mutations were present in 9.58% of cases, while only one patient was ALK-positive. Moreover, abnormal immunostaining of p53 was detected in 56.16% of patients. In conclusion, the detected rates of EGFR and KRAS mutation and ALK rearrangement were lower than those found in European and Asian countries, whereas, abnormal p53 expression was slightly more frequent. Furthermore, given the small sample size of this study, a more comprehensive analysis of this patient set is warranted. View Full-Text
Keywords: molecular profile; EGFR; KRAS; ALK; p53; lung adenocarcinoma molecular profile; EGFR; KRAS; ALK; p53; lung adenocarcinoma
►▼ Show Figures 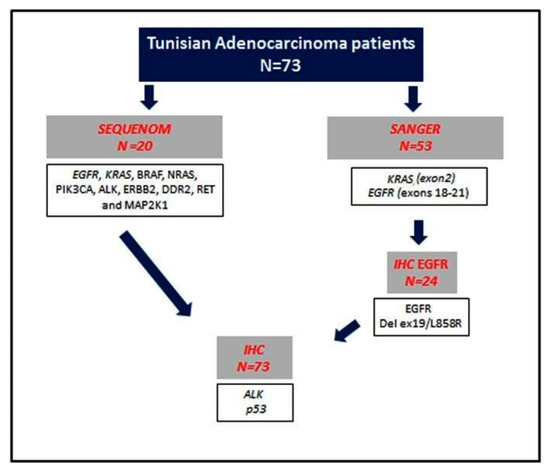