Molecular Imaging of the Dopamine Transporter
Previous Article in Journal

Parkinson’s disease (PD) is the second most common degenerative disorder. Although the disease was described more than 200 years ago, its pathogenetic mechanisms have not yet been fully described. In recent years, the discovery of the association between mutations of the GBA gene (encoding for the lysosomal enzyme glucocerebrosidase) and PD facilitated a better understating of this disorder. GBA mutations are the most common genetic risk factor of the disease. However, mutations of this gene can be found in different phenotypes, such as Gaucher’s disease (GD), PD, dementia with Lewy bodies (DLB) and rapid eye movements (REM) sleep behavior disorders (RBDs). Understanding the pathogenic role of this mutation and its different manifestations is crucial for geneticists and scientists to guide their research and to select proper cohorts of patients. Moreover, knowing the implications of the GBA mutation in the context of PD and the other associated phenotypes is also important for clinicians to properly counsel their patients and to implement their care. With the present review we aim to describe the genetic, clinical, and therapeutic features related to the mutation of the GBA gene. View Full-Text
Keywords: glucocerebrosidase; Parkinson’s disease; Gaucher’s disease; Lewy Body Dementia; REM sleep behavior disorders glucocerebrosidase; Parkinson’s disease; Gaucher’s disease; Lewy Body Dementia; REM sleep behavior disorders
►▼ Show Figures 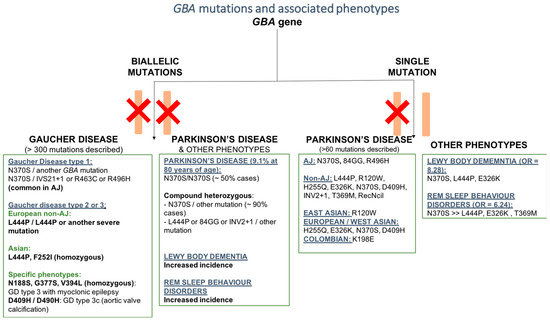