Tumor Extracellular Matrix Remodeling: New Perspectives as a Circulating Tool in the Diagnosis and Prognosis of Solid Tumors
Next Article in Special Issue

In this study, we investigated the influence of metformin (MF) on proliferation and viability of adipose-derived stromal cells isolated from horses (EqASCs). We determined the effect of metformin on cell metabolism in terms of mitochondrial metabolism and oxidative status. Our purpose was to evaluate the metformin effect on cells derived from healthy horses (EqASCHE) and individuals affected by equine metabolic syndrome (EqASCEMS). The cells were treated with 0.5 μM MF for 72 h. The proliferative activity was evaluated based on the measurement of BrdU incorporation during DNA synthesis, as well as population doubling time rate (PDT) and distribution of EqASCs in the cell cycle. The influence of metformin on EqASC viability was determined in relation to apoptosis profile, mitochondrial membrane potential, oxidative stress markers and BAX/BCL-2 mRNA ratio. Further, we were interested in possibility of metformin affecting the Wnt3a signalling pathway and, thus, we determined mRNA and protein level of WNT3A and β-catenin. Finally, using a two-tailed RT-qPCR method, we investigated the expression of miR-16-5p, miR-21-5p, miR-29a-3p, miR-140-3p and miR-145-5p. Obtained results indicate pro-proliferative and anti-apoptotic effects of metformin on EqASCs. In this study, MF significantly improved proliferation of EqASCs, which manifested in increased synthesis of DNA and lowered PDT value. Additionally, metformin improved metabolism and viability of cells, which correlated with higher mitochondrial membrane potential, reduced apoptosis and increased WNT3A/β-catenin expression. Metformin modulates the miRNA expression differently in EqASCHE and EqASCEMS. Metformin may be used as a preconditioning agent which stimulates proliferative activity and viability of EqASCs. View Full-Text
Keywords: adipose-derived stromal cells; equine metabolic syndrome; metformin adipose-derived stromal cells; equine metabolic syndrome; metformin
►▼ Show Figures 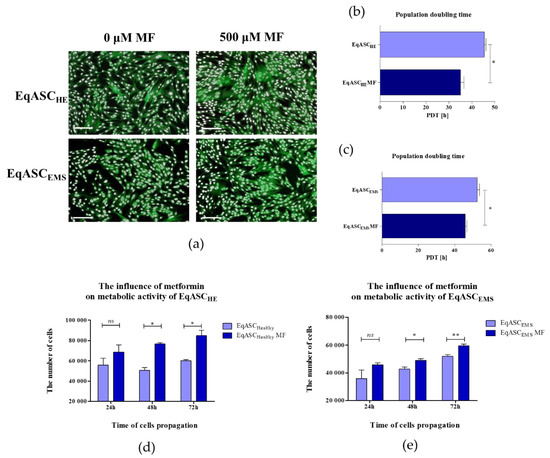