NFKB1 and Cancer: Friend or Foe?
Next Article in Special Issue

To perform essential biological functions and respond to changes in their microenvironments, cells systematically change the expression levels of process-relevant genes, while maintaining homeostatic expression of so-called housekeeping genes. For example, after detecting lipopolysaccharide (LPS), a bacteria-derived substance and molecular indicator of infection, macrophages alter the expression levels of several thousand genes, while maintaining baseline expression of other genes [1]. We still do not fully understand the mechanisms underlying how the cells of different tissues regulate the expression of such an astounding number of genes in a coordinated manner to respond to changes in their surroundings. The interaction of transcription factors (TFs) with DNA is fundamental for the regulation of gene expression [2]. Each of the more than 2600 human TF proteins [3] can influence transcription by interacting with specific DNA sequence motifs located throughout the chromatinscape. TFs are thought to not only determine which genes are expressed, but also influence the degree and timing of gene expression. However, their temporal activity patterns (hereafter referred to as TF dynamics) can be unexpectedly complex [4,5,6,7,8,9,10,11], which raises questions about their functional significance, and also complicates efforts to understand the role of TF dynamics in terms of gene regulation.
In investigations of TF dynamics in single cells, TFs are often expressed as fluorescent fusion proteins and imaged via live-cell fluorescence microscopy. Imaging enables real-time recording of stimulus-induced changes in single cell TF abundance, nuclear localization, and residence time [12,13,14]. Patterns of signal-induced TF dynamics observed in mammalian cells include single peak, multiple peaks or oscillations, and sustained activation (Figure 1A–C). Through quantitative image analysis, specific features which describe various aspects of single cell TF dynamics can be extracted. For example, TF dynamics features, such as the length of time until TF activity is detected (time-to-response or onset delay), the amplitude or fold-change, the length of time a TF remains active (duration), and time-integrated TF activity (area under the curve (AUC)) [5] (Figure 1D), have been used to test for correlation with downstream readouts.
Changes in the population-level expression of specific target genes have been correlated to single cell dynamics of TFs, including nuclear factor κB (NF-κB) [13,15,16,17,18,19], SMAD [20], and p53 [21,22,23,24] (Figure 1E). However, TF dynamics-mediated regulation of mammalian gene expression at the single cell level has only been investigated in a limited number of seminal studies [23,25,26,27,28,29,30,31], partly due to technical constraints. These studies measured TF dynamics and gene expression in the same single cells by combining live cell imaging of a TF reporter with one of four experimental approaches: (1) single-molecule RNA fluorescence in situ hybridization [23,25,26]; (2) single-cell RNA-seq [27]; (3) imaging fluorescent reporter protein expression levels [13,29,30,31]; or (4) use of microfluidic immunoassays to measure levels of secreted proteins encoded by the induced genes [28].

Single-molecule RNA fluorescence in situ hybridization (smRNA-FISH) is a molecular technique characterized by its ability to detect low levels (<5 copies per cell) of endogenous RNA transcripts of interest in individual cells [32,33]. It requires incubating fixed cells with fluorescently labeled probes which hybridize to complementary RNA transcripts. After hybridization, the abundance (and spatial distribution) of the fluorescent probe-RNA complexes are measured by fluorescence microscopy and serve as readouts of gene expression levels [32,33]. Although commonly performed to analyze the expression of a few genes, smRNA-FISH has been multiplexed to analyze the expression levels of tens to thousands of different genes [34,35,36,37,38]. Using this approach, certain dynamic features of NF-κB [25], p53 [23], and SMAD [26] have been revealed to correlate with the expression of their target genes in the same cells. Specifically, fold changes in the initial peak response of NF-κB [25] and SMAD [26] were found to correlate with target gene expression, while the duration of TF activity was important for p53-mediated gene expression [23].
Despite the high-resolution measurements of transcripts enabled by smRNA-FISH, this approach has a caveat which must be considered in the interpretation of results. smRNA-FISH cannot be used to monitor temporal changes in gene expression in the same single cells over time. Instead, only a single endpoint snapshot measurement of gene expression can be obtained per cell, after TF dynamics have been continuously imaged in each cell (Figure 2A,B). Therefore, it is difficult to adequately measure gene expression patterns or dynamics in single cells using smRNA-FISH. If only one snapshot of gene expression is taken per cell for a specific gene or set of genes, gene expression patterns that occur before or after the snapshot is taken are unable to be recorded. Subsequently, important data collection may be missed (Figure 2B), which could impact determinations as to whether TF dynamics correlate or do not correlate with single cell gene expression (Figure 2C). The use of one endpoint leaves this approach especially prone to false-negative conclusions (Figure 2C, genes C–D). If two or more timepoint snapshot measurements are recorded, conclusions may be strengthened incrementally. However, a negative result, i.e., a lack of correlation between TF dynamics and gene expression, would still be possible if the correlated behaviors occurred at some other (unsampled) times.

Single-cell RNA sequencing (scRNA-seq) offers a uniquely powerful advantage which is orthogonal to smRNA-FISH, as this approach enables an unbiased profiling of gene expression. It measures the levels of endogenous RNA transcripts expressed in individual cells in a genome-wide manner by next-generation sequencing technology [39,40,41,42,43]. Such a wide coverage dataset cannot be obtained from other single cell approaches. To the best of our knowledge, scRNA-seq has only recently been used to study the impact of TF dynamics on single cell gene expression [27], where the investigators also employed smRNA-FISH to verify results for selected genes. This study revealed that LPS-induced patterns of single cell NF-κB dynamics (single narrow peak, sustained peak, or multiple peaks) correlate with the expression of distinct genes [27].
Unfortunately, scRNA-seq possesses the same pitfall as smRNA-FISH because it is also limited to providing only one single static snapshot of gene expression per cell (Figure 2B). scRNA-seq does not measure changes in gene expression in individual cells or capture transient or long-term gene expression events that take place before or after a snapshot measurement is obtained. Therefore, interpreting whether TF dynamics and single cell gene expression correlate with each other can also be problematic when using scRNA-seq (Figure 2A–C). Moreover, use of scRNA-seq currently requires that single cells be cultured and imaged for TF dynamics in isolation of each other, so that each cell can later be harvested for RNA analysis [27]. This blocks any naturally occurring exchange of paracrine signals between cells. Lastly, scRNA-seq comes with commonly acknowledged technical issues such as sparse data, noisy signals, amplification bias, and drop-outs [44].

Advances in microscopy, high-throughput sequencing, and microfluidics are steadily making the study of single cell TF dynamics more tractable. However, many unresolved and technically challenging issues remain regarding the fundamental aspects of TF dynamics and their role in gene regulation. Each of the approaches to measuring single cell gene expression discussed here, when coupled with imaging TF dynamics, has its own benefits and pitfalls. Any of the given methods may be the most appropriate depending on specific research needs. Nonetheless, we argue that the use of fluorescent reporter proteins is the technique which may well be the best option currently, being the only approach that provides real-time data in the same single cells. Such information-rich data can be used to determine per-cell correlations between TF dynamics and gene expression, which provides critical information for mechanistic modeling of the relevant regulatory processes. We look forward to improvements in existing technologies and the development of new methods that will facilitate our abilities to simultaneously measure real-time TF dynamics as well as expression of many endogenous genes in the same cells, in vitro and in vivo.

The authors thank Alicja Pacholewska for critical reading of the manuscript. 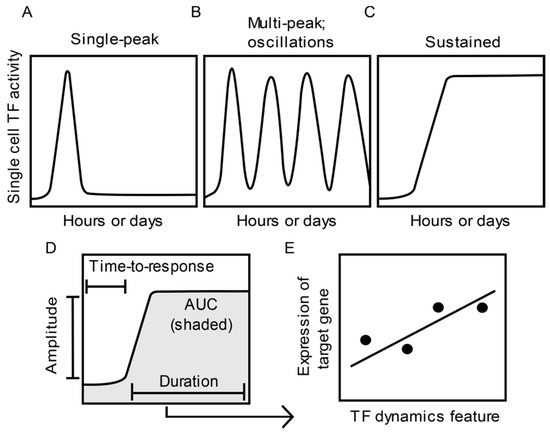 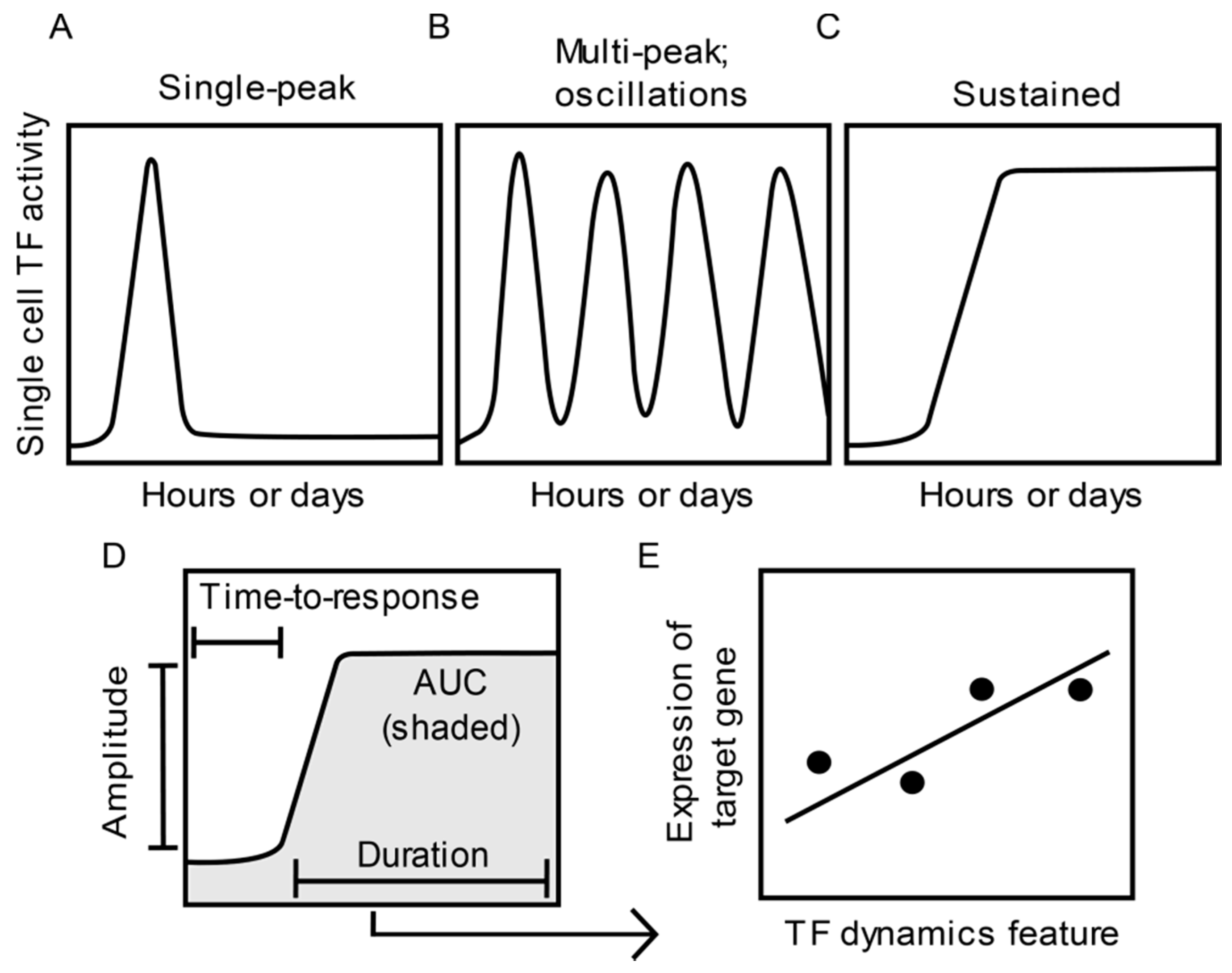 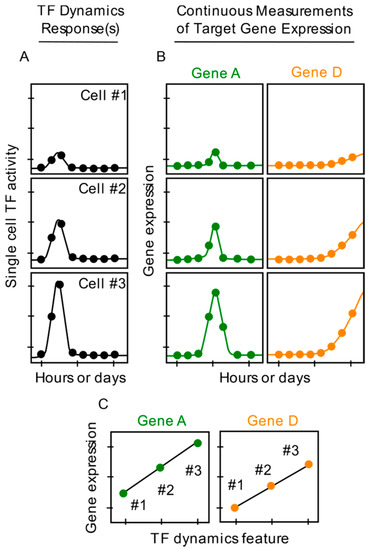