The Interplay among PINK1/PARKIN/Dj-1 Network during Mitochondrial Quality Control in Cancer Biology: Protein Interaction Analysis
Next Article in Special Issue

:
High 17β-Estradiol (E2) levels are known to cause alterations of spermatogenesis and environments throughout the male reproductive tract. Sertoli cells (SCs) ensure an adequate environment inside the seminiferous tubule. Glycerol stands as essential for the maintenance of blood–testis barrier created by SCs, however, the role of E2 in this process is not known. Herein, we hypothesized that the effect of E2 on glycerol permeability in mouse SCs (mSCs) could be mediated by aquaglyceroporins. The expression of aquaglyceroporins was assessed by RT-PCR and qRT-PCR. Glycerol permeability was evaluated by stopped-flow light scattering. We were able to identify the expression of AQP3 and AQP9 in mSCs where AQP9 is more abundant than AQP3. Our results show that high E2 levels decrease AQP9 mRNA abundance with no influence on AQP3 in mSCs. Interestingly, high E2 levels decreased mSCs’ permeability to glycerol, while downregulating AQP9 expression, thus suggesting a novel mechanism by which E2 modulates fluid secretion in the testis. In conclusion, E2 is an important regulator of mSCs physiology and secretion through changes in AQP9 expression and function. Thus, alterations in glycerol permeability induced by E2 may be the cause for male infertility in cases associated with the presence of high E2 levels.
Keywords:
aquaglyceroporins; AQP9; estrogens; glycerol; male infertility; Sertoli cells

In the last two decades, extensive research showed that beyond the classic view on the major relevance of androgens for male reproduction, estrogens can also regulate the development and function of the male reproductive tract. 17β-Estradiol (E2) is found in measurable concentrations in the blood of men and higher concentrations have been reported in the testis and semen [1,2]. E2 is necessary for the healthy development and function of the male reproductive organs. However, elevated levels of this hormone induce deleterious effects that are consistently associated with male subfertility or infertility [2,3]. For instance, elevated E2 levels induce morphological alterations in Sertoli cells (SCs) and Leydig cells that result in severe failures in spermatogenesis [4].
High E2 levels change ionic homeostasis and the transport of some molecules within the seminiferous tubule, and some of those molecules may alter or even arrest spermatogenesis. For instance, elevated concentrations of glycerol in testis causes changes in the function of the blood–testis barrier (BTB), compromising the homeostasis of the tubular fluid and leading to the death of germ cells [5]. In fact, while glycerol is essential for spermatogenesis [6], acute exposure to high concentrations of glycerol can temporarily halt spermatogenesis [7]. In addition, chronic exposure to high glycerol concentrations may prompt permanent oligospermia or even azoospermia [5]. SCs are responsible for the maintenance of the BTB [8] and thus for promoting normal spermatogenesis. However, studies concerning SCs’ permeability to glycerol and the expression and function of the associated transport mechanisms are still scarce.
Aquaporins (AQPs) are a family of channel proteins facilitating the transport of water and a series of small anaelectrolytes across biological membranes [9]. Aquaglyceroporins represent a subgroup of the AQPs family conducting not only water but also small neutral solutes, such as glycerol [10]. Mammalian aquaglyceroporins comprise four known homologues—AQP3, AQP7, AQP9, and AQP10. AQPs are widely located in the male reproductive tract, where they are involved in fluid absorption/secretion dynamics and contribute in maintaining the homeostasis for the occurrence of a normal spermatogenesis [9,11]. Hence, AQPs have emerged as pivotal for healthy male reproductive function and alterations in their expression or function have been suggested to result in subfertility or infertility. Furthermore, there is evidence that estrogens regulate the expression and function of AQPs in efferent ducts and epididymis. It was reported that estrogens modulate water reabsorption through AQP9, which may compromise sperm quality [12,13]. These works led us to envisage that male infertility may be linked to elevated E2 levels and altered expression or function of aquaglyceroporins associated with glycerol permeability in SCs.
Herein, we hypothesized that E2 may regulate glycerol permeability through aquaglyceroporins expression and function in mouse testis, particularly in mouse SCs (mSCs). Thus, the aim of this study was to evaluate the impact of high concentrations of E2 on aquaglyceroporins expression in mSCs, with focus on the expression of AQP3, AQP7, and AQP9 (the Aqp10 gene is a pseudogene in mouse) [14]. Since these aquaglyceroporins are responsible for the transport of glycerol whose homeostasis is critical for proper male reproductive health, we further evaluated the impact of high E2 on mSCs’ glycerol permeability.

Mouse SCs (mSCs), TM4 were purchased from ATCC (Manassas, VA, USA). Cells were seeded in a 75 cm2 flask (SPL70075, SPL Life Sciences, Gyeonggi, Korea) in 1:1 mixture of DMEM:F12 supplemented with 1.2 g/L sodium bicarbonate, 50 U/mL penicillin, 50 mg/mL streptomycin sulphate, 0.5 mg/mL fungizone, 50 μg/mL gentamicin, and 5% FBS with physiological concentrations of testosterone (5 µM) and E2 (1 nM).
Cells were grown until reaching a confluence of 70–80%. Then, the culture medium was replaced by phenol-red free DMEM:F12 medium supplemented with ITS (in mg/L: insulin 10, transferrin 5.5, selenium 0.0067; pH 7.4). Cells were separated in two groups, control group and a group treated with high concentration of E2 (100 nM). The E2 concentration was chosen based on published papers, which demonstrated that in intratesticular plasm levels of this hormone are particularly higher than those of circulating plasma, reaching concentrations up to 200 nM [15,16]. The same amount of ethanol (solvent) was used in the cells of the control group that was used in the cells of the E2-treated group (<0.025% v/v). Treatments were done during 24 h in an atmosphere of 6% CO2 and 94% O2 at 33 °C.

Extraction of RNA from mSCs and mouse testis was performed using the NZY Total RNA Isolation kit as indicated by the manufacturer. RNA concentrations were determined by Nanodrop 2000 Spectrophotometer (Thermo Fisher Scientific, Waltham, MA, USA). RNA was reversely transcribed using the NZY M-MuLV Reverse Transcriptase. The resultant complementary DNA (cDNA) was used with exon-exon spanning primer sets designed to amplify cDNA fragments described in Table 1.
Conventional reverse transcriptase PCR (RT-PCR) was performed to identify Aqp3, Aqp7, and Aqp9 mRNAs in mSCs and quantitative Real-Time PCR (qPCR) was performed to evaluate the mRNA abundance in cells from the control and E2-treated group as previously described [3]. Briefly, specific primers were designed for the amplification of the Aqp3, Aqp7, Aqp9, and β-2-microglobulin transcripts. qPCR conditions were previously optimized and specificity of the amplicons was determined by melting curves. Amplification conditions: 5 min at 95 °C, followed by 30 or 40 runs of a 3 steps cycle: 10 s at 95 °C; 30 s with a specific temperature for each set of primers, and 10 s at 72 °C. β2-microglobulin transcript levels were used to normalize gene expression levels. Fold variation of gene expression levels was calculated following the model proposed by Pfaffl [17], using the formula 2−ΔΔCt.

mSCs obtained from the control and E2-treated groups were detached with trypsin and centrifuged at 300× g (gravitational units) to obtain a cellular pellet. The cells were resuspended in isotonic medium (300 mOsm, in mM: 220 mannitol, 70 sucrose, 20 Tris-HCl, 1 EDTA, 5 EGTA, 1 PMSF, pH 7.4) and left for 10 min to reach the equilibrium in this medium. The cellular preparations were homogeneous and mSCs were spherical in shape when in suspension, as observed under light microscopy. The diameter of cells was measured for all the preparations with ImageJ software with pictures obtained by light microscopy.

Stopped-flow light scattering was performed following an adaptation of the protocol described by Maggio et al. [18] and Campos et al. [19]. Experiments were performed on a HI-TECH Scientific PQ/SF-53 stopped-flow apparatus, which has a 2 ms dead time and is temperature controlled (24 °C), interfaced with an IBM PC/AT compatible 80386 microcomputer. This procedure was performed to measure the membrane permeability of mSCs to glycerol. Osmotic shock was performed with glycerol solution (540 mOsm, in mM: 150 glycerol, 220 mannitol, 70 sucrose, 20 Tris-HCl, 1 EDTA, 5 EGTA, 1 PMSF, pH 7.4). Four runs were usually stored and analysed in each experimental condition. In each run 0.1 mL cellular suspension was mixed with an equal amount of hyperosmotic glycerol solution to reach inwardly directed gradients of solute. After the first fast cell shrinkage due to water outflow, glycerol influx in response to its chemical gradient was followed by water influx with subsequent cell re-swelling. The kinetics of cell re-swelling was measured from the time course of 90° scattered light intensity at 530 nm until a stable light scatter signal was attained. Glycerol permeability (Pgly) was calculated as Pgly = ki(V0/A), where ki is the single exponential time constant (s−1) fitted to the light scattering signal of glycerol influx and V0/A is the initial cell volume to area ratio.
Glycerol permeability was measured in mSCs control and E2-treated groups. In addition, both groups were incubated with phloretin, a general inhibitor of aquaglyceroporins [20,21], Phloretin (0.7 mM) was added to the cellular suspension 15 min before permeability measurements, according to previously published data [20,21]. All solution osmolarities were determined from freezing point depression on a semi-micro osmometer (Knauer GmbH, Berlin, Germany) using standards of 100 and 400 mOsm.

To date, studies on the role and location of aquaglyceroporins in SCs are virtually nonexistent. In this study, we performed a screen to identify the expression of aquaglyceroporins in mSCs. We were able to identify the expression of Aqp3 and Aqp9, but the presence of Aqp7 was not detected in mSCs (Figure 1A). The positive control for Aqp3 and Aqp7 was mouse kidney and for Aqp9 was mouse liver. We did not check the fourth aquaglyceroporin, AQP10, since its gene is known to be a pseudogene in mouse [14].
The relative abundance of the Aqp3 and Aqp9 transcripts was determined by qRT-PCR, with the primers’ efficiency set to 90–110%. In mSCs, the relative abundance of Aqp9 (0.0200 ± 0.0029 arbitrary units) resulted about seven times higher than that of Aqp3 (0.0034 ± 0.0004 arbitrary units) in mSCs (Figure 1B).

3.3. Permeability of mSCs to Glycerol is Decreased after Exposure to High Levels of E2

Since aquaglyceroporins allow facilitated diffusion of glycerol across membranes we ran stopped-flow light scattering experiments to evaluate the possible correlation between the expression of the aquaglyceroporins in question and the mSCs membrane permeability. Glycerol permeability (Pgly, µm/s) was calculated by evaluating the diminution in light scattering intensity associated to the osmotic influx of water that followed the entry of glycerol into the mSCs triggered by its inwardly-directed chemical gradient (150 mM; see Materials and Methods for details). The diameter of mSCs needed to calculate the Pgly was measured by optical microscopy before the beginning of the stopped-flow light scattering measurements, when the suspended cells were in osmotic equilibrium with the 300 mOsm solution. The mean cell diameter was 21.50 ± 0.32 µm. Scattered light intensity representative curves of mSCs from control group (A), group exposed to the aquaglyceroporin inhibitor, phloretin (C), E2-treated group (B), and E2-treated group exposed to phloretin (D) are illustrated in Figure 3.
The inhibition of aquaglyceroporins by phloretin reduced the permeability of mSCs to glycerol by 55% in relation to control (44.92 ± 2.29%, 100 ± 13.38%, respectively). Additionally, exposure to high levels of E2 also significantly reduced the mSCs’ permeability to glycerol, likewise cells treated with E2 and exposed to phloretin (54.21 ± 1.97%, 43.04 ± 1.56%, respectively) (Figure 4). Consistent with the above described aquaglyceroporin downregulation induced by E2, no differences were observed concerning the Pgly values in mSCs inhibited with phloretin and those exposed with E2 and then treated with phloretin before the glycerol permeability measurements (Figure 4). 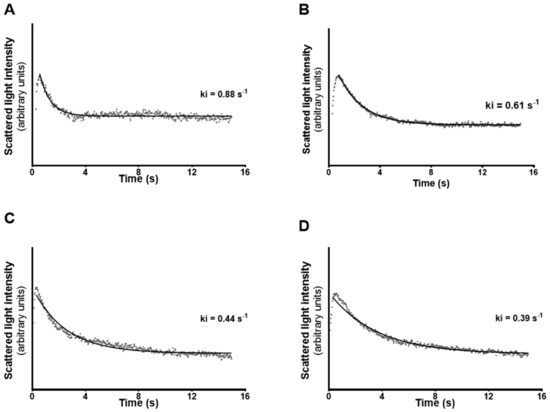 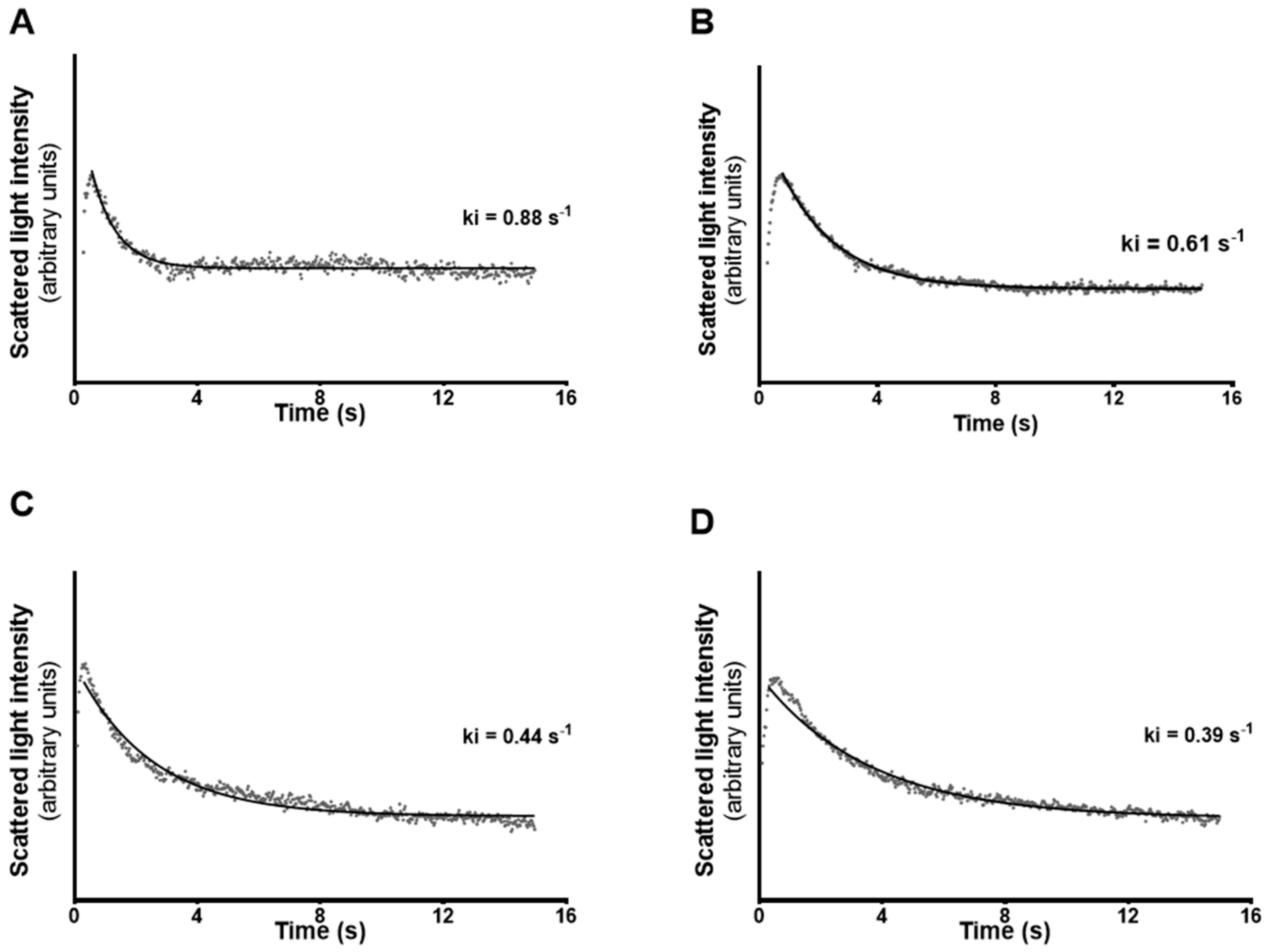