The Role of G Protein-Coupled Receptors (GPCRs) and Calcium Signaling in Schizophrenia. Focus on GPCRs Activated by Neurotransmitters and Chemokines
Next Article in Special Issue

From Laboratory Studies to Clinical Trials: Temozolomide Use in IDH-Mutant Gliomas
Previous Article in Special Issue

Weapons Evolve Faster Than Sperm in Bovids and Cervids

Can Sexual Selection Drive the Evolution of Sperm Cell Structure?

Full details of the protocols adopted during experimental evolution have been described elsewhere [55]. In brief, we collected ~1000 beetles from a dairy farm in Byford, Western Australia. From this sample, 300 females were established in breeding tubes, 30 cm in length and 9 cm in diameter, three quarters filled with damp sand and topped with 25 mL of fresh cattle dung. Females were left to construct broods for 1 week, after which tubes were sieved and broods buried in moist sand, in batches of ~50 broods per 10-L box. Broods were incubated at 28 °C for 4 weeks, after which adult offspring had all emerged. Offspring were held in single sex cultures for 1 week to mature sexually. Mixed sex cultures of ~200 beetles were then established in 30-L buckets, containing ~20-L moist sand and topped with 1-L of fresh cattle dung, and left for 1 week to mate. F1 females (300) were recovered from these cultures and established in breeding chambers to produce the next generation. In this way, beetles were bred for two generations to establish them to laboratory conditions.
Experimental evolution began using the F2 of females collected from the field. We established 3 replicate populations that would evolve under enforced monogamy and 3 replicate populations that would evolve under sexual selection. For each of our monogamous lines, during the mating phase, 60 females were each allocated a single male at random, and the pair housed in a small plastic container (7 × 7 × 5 cm) three-quarters filled with moist sand and topped with 10-mL of fresh dung (Figure 1). For each of our sexual selection lines, 10 males and 10 females were housed in each of 6 30-L buckets for the mating phase of the breeding cycle. All other rearing protocols were identical. Females were established in individual breeding chambers to build broods for 1 week. After sieving broods from individual breeding chambers, we kept broods from the 50 most productive females in each replicate line. These broods were incubated and beetles collected to seed the next generation following the protocols outlined above (Figure 1). The effective population size for monogamous populations was thus 100, and for the sexual selection lines estimated to be in the region of 106, taking into account the average number of different males that females were expected to have mated with and the distribution of paternity among competing males [55]. The standardized Bateman gradient (the relationship between number of mates and male reproductive success) which provides an estimate of the strength of sexual selection acting within the sexual selection populations, was estimated to be ~0.8 [51,55]. Beetles were sampled for this study after 20 generations of experimental evolution.

A sample of between 16 and 20 (mean ± SE, 18.0 ± 0.6) sexually mature males were collected from each population after they had completed the 1-week of maturation feeding, and frozen at −20 °C. Sperm measurement followed the protocols outlined in Werner and Simmons [57]. Beetles were thawed and dissected. The testicular follicles were separated from the seminal vesicles and discarded. Mature sperm cells were then collected from the seminal vesicles. Mature sperm are joined by their heads to form bundles when in the seminal vesicles (Figure 2), but individual sperm separate from these bundles when transferred to the female (LWS personal observation); individual sperm disassociate from bundles readily when agitated in phosphate buffered saline (PBS). Sperm measurements were made from images captured under light microscopy, using an upright Zeiss AxioImager, equipped with an epifluorescence unit and a Zeiss AxioCam MRc5 digital camera. A 10-μL drop of the sperm suspension in PBS was placed onto a clean glass microscope slide and 2 μL of 4′,6-diamidino-2-phenylindole (DAPI) solution (10 mg/mL) added [57]. After a 10-min incubation period, whole sperm were photographed in phase contrast, and higher magnification images of the head region were taken under fluorescence light (Zeiss Filter Set 01; excitation, BP 365/12; emission, LP 397). The length of the acrosome, the nucleus, and the mitochondrial derivative (hereafter referred to as the flagella, see [57]) of between 9 and 17 (13.6 ± 0.14) sperm cells were measured for each male (Figure 2).

This research received funding from the Australian Research Council.

All data are publicly available via the University of Western Australia Research Repository, https://research-repository.uwa.edu.au/en/datasets/data-from-can-sexual-selection-drive-the-evolution-of-sperm-cell- (accessed on 3 May 2021).

We thank Maxine Lovegrove for her help in breeding dung beetles and Michael Werner for histology and sperm cell measurement. 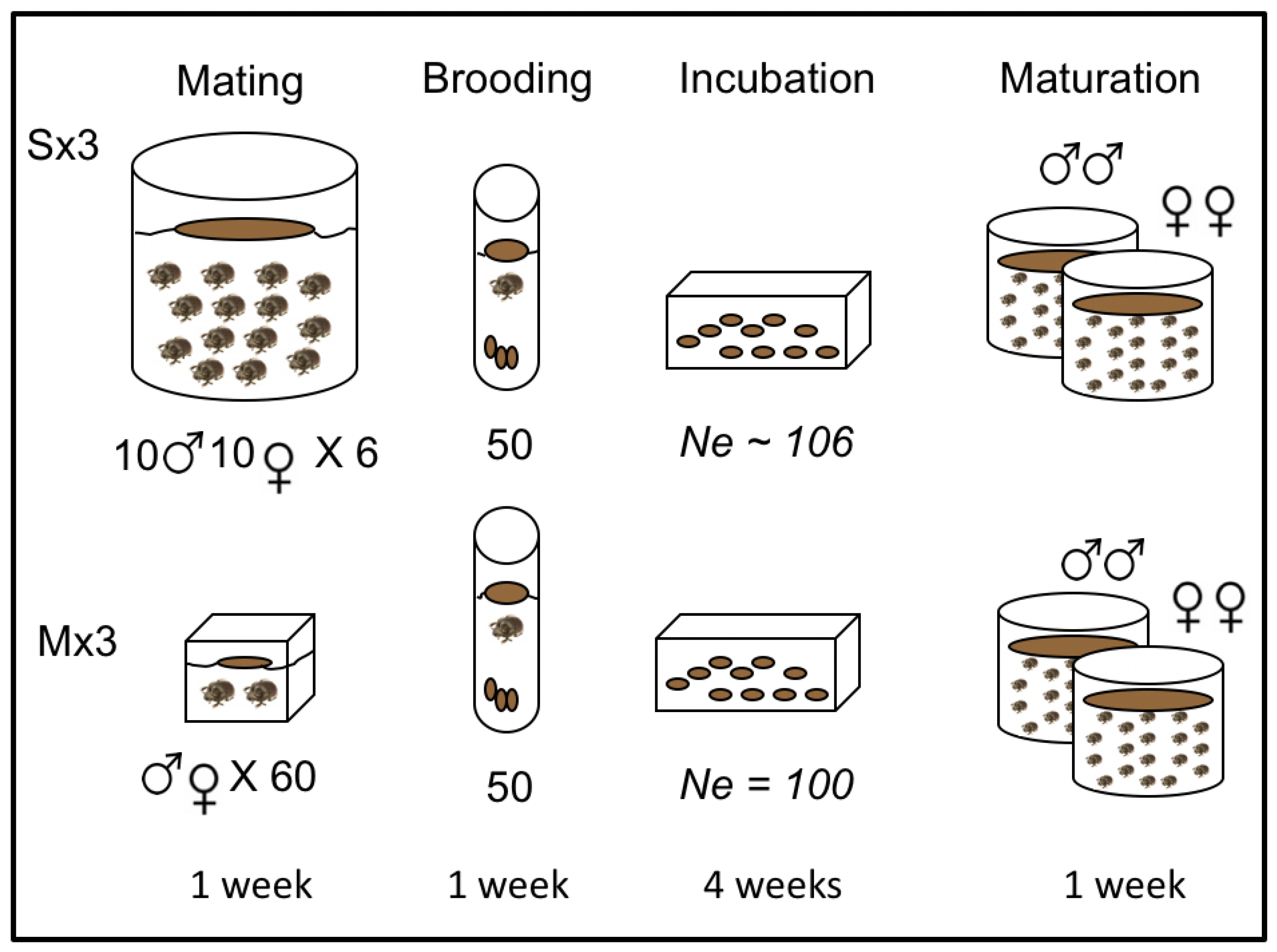 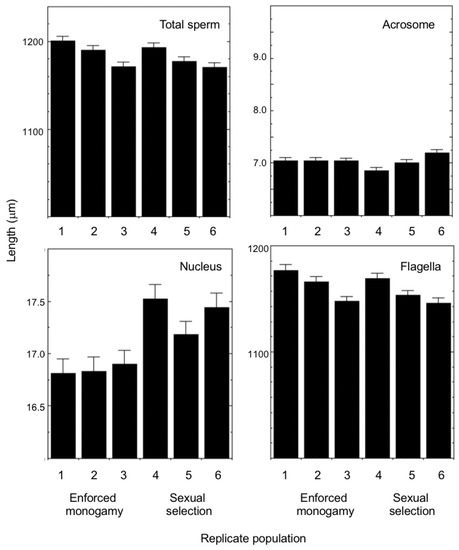