Background: Extracellular vesicles (EVs) are secreted by cells from their membrane within circulation and body fluids. Knowledge of the involvement of EVs in pathogenesis of lung diseases is increasing. The present study aimed to evaluate the expression of exosomal surface epitopes in a cohort of idiopathic pulmonary fibrosis (IPF) patients followed in two Italian Referral Centres for Interstitial Lung Diseases, comparing them with a group of healthy volunteers. Materials and Methods: Ninety IPF patients (median age and interquartile range (IQR) 71 (66–75) years; 69 males) were selected retrospectively. Blood samples were obtained from patients before starting antifibrotic therapy. A MACSPlex Exosome Kit, human, (Miltenyi Biotec, Bergisch-Gladbach, Germany), to detect 37 exosomal surface epitopes, was used. Results: CD19, CD69, CD8, and CD86 were significantly higher in IPF patients than in controls (p = 0.0023, p = 0.0471, p = 0.0082, and p = 0.0143, respectively). CD42a was lower in IPF subjects than in controls (p = 0.0153), while CD209, Cd133/1, MCSP, and ROR1 were higher in IPF patients than in controls (p = 0.0007, p = 0.0050, p = 0.0139, and p = 0.0335, respectively). Kaplan-Meier survival analysis for IPF patients: for median values and a cut-off of 0.48 for CD25, the two subgroups showed a significant difference in survival rate (p = 0.0243, hazard ratio: 0.52 (95%CI 0.29–0.92); the same was true for CD8 (cut-off 1.53, p = 0.0309, hazard ratio: 1.39 (95%CI 0.75–2.53). Conclusion: Our multicenter study showed for the first time the expression of surface epitopes on EVs from IPF patients, providing interesting data on the communication signatures/exosomal profile in serum from IPF patients and new insights into the pathogenesis of the disease and a promising reliability in predicting mid-term survival of IPF patients.
Keywords: extracellular vesicles; IPF; biomarkers; prognosis extracellular vesicles; IPF; biomarkers; prognosis

Extracellular vesicles (EVs) are secreted by the cell membrane into the circulation and body fluids. They contain cytoplasmic components, such as proteins and miRNA. Since EVs express surface proteins linked to their origin, they can adhere and fuse with circulating or distant resident cells. This capturing property of distant cells enables EVs to shuttle functional nucleotides or proteins, providing horizontal transfer of a variety of biological molecules [1]. EVs include exosomes, previously distinguished on the basis of size (40–150 nm) [2]. Exosomes are EVs generated by inward budding of the cell membrane (endocytosis), subsequent shaping of multivesicular bodies, and release by exocytosis [3]. During release into the extracellular space, the peripheral membrane of the multivesicular bodies fuses and the exosomes incorporate various membrane proteins, including tetraspanins (CD9, CD63, CD81). These surface proteins are recognized as markers of exosomes. Due to overlapping sizes and a lack of specific markers for each EV component, the International Society for Extracellular Vesicles recommends using an umbrella term, EVs, to describe all vesicle types [2,4].
In respiratory medicine, there is increasing evidence of the involvement of EVs in the pathogenesis of lung diseases including lung cancer, chronic obstructive pulmonary disease, and pulmonary fibrosis [4,5,6].
In the field of lung cancer, studies on EVs are extensively growing, especially about the potential of EVs as diagnostic biomarkers of lung cancer [6,7]. Exosomes have been demonstrated to modify the tumor microenvironment, promoting metastasis and angiogenesis and modulating immune responses. EVs can regulate cancer-associated fibroblasts.
A few reports have investigated the role of miRNA in a murine bleomycin-induced lung fibrosis model and in IPF patients. Their results suggest that miRNAs could be useful prognostic indicators of disease [4].
Unlike conventional biomarkers of IPF, such as Krebs von den Lungen-6 (KL-6) [8,9,10,11,12,13] and matrix metalloproteases, EVs and miRNAs may be quite specific for cell conditions in pulmonary fibrosis. Alone or combined with conventional biomarkers, they may offer insights into the pathogenesis and progression of IPF.
The aim of the present study was to compare the expression of exosomal surface epitopes in a cohort of IPF patients monitored in two Italian referral centres for interstitial lung diseases (ILDs) and in a control group of healthy volunteers.

Ninety IPF patients (median age and interquartile range (IQR) 71 (66–75) years; 69 males), monitored at the Siena Regional Referral Centre for Interstitial Lung Diseases and Foggia Regional Referral Centre for Rare Pulmonary Diseases, were selected retrospectively. Patients with clinical evidence of concomitant infections, malignancies, and/or acute exacerbations of the disease were excluded, as well as IPF patients with a radiological pattern of indeterminate usual interstitial pneumonia (UIP). The diagnosis of IPF was confirmed by multidisciplinary discussion according to international guidelines [14]. Only fifteen patients (16.6%) had histological confirmation of IPF. As control group, we enrolled 19 healthy volunteers (median age (IQR) 63 years (52–65); 12 males). Data were retrospectively collected from medical reports and entered in an electronical database by physicians experienced in the management of ILD [15].
Blood samples were obtained from patients before starting antifibrotic therapy [16,17]. Lung function tests and high-resolution computed tomography (HRCT) of the chest were performed for all patients for diagnostic purposes. They were performed according to American Thoracic Society/European Respiratory Society (ATS/ERS) standards [18] using a Jaeger body plethysmograph with correction for temperature and barometric pressure.
Demographic and clinical data, comorbidities, family history, lung function parameters, including diffusion capacity of carbon monoxide (DLCO), and radiological features were obtained from the medical records and entered in an electronic database for statistical analysis.
The description of the study design with a flow chart is reported in Figure 1.
Healthy controls and patients gave their written informed consent to participate in the study, which was approved by our local ethics committee (C.E.A.V.S.E., Tuscany, Italy, Markerlung number 17431).

Serum samples were processed as follows: 6 mL blood samples from IPF patients and healthy volunteers were isolated in serum-separating tubes. The blood was spun at 2500× g for 10 min. Samples were then frozen at −80 °C.

According to the manufacturer’s instructions [19], serum was diluted with an equal volume of PBS. Cells and cell debris were removed by serial centrifugations at 2000× g for 30 min and 10,000× g for 45 min at 4 °C. The pellets were resuspended and filtered through a 0.22 μm membrane. EVs were isolated by ultracentrifuging the supernatant at 100,000× g for 2 h at 4 °C. The EVs were resuspended in 100 μL PBS and stored at −80 °C.

The Bradford protein assay was used to measure protein concentrations in BAL fluid samples, as previously reported [20,21,22]. The principle of the assay is the binding of protein molecules to Coomassie dye under acidic conditions which results in a colour change from brown to blue. This method measures the basic amino acid residues arginine, lysine, and histidine, which contribute to the formation of the protein-dye complex. EV samples were processed in a 96-well plate assay using Bradford reagent for 0.1–1.4 mg/mL protein (Sigma-Aldrich, St. Louis, MO, USA). Standard curves were obtained using bovine serum albumin (BSA) (Sigma Aldrich, St. Louis, MO, USA) according to the manufacturer’s instructions. The samples were incubated for 20 min, and fluorescence was read at 595 nm with a Perkin Elmer Victor X4 fluorimeter. EV proteins were expressed in mg/mL.

The results were expressed as means and standard deviations (SD) or medians and quartiles (25th and 75th percentiles) for continuous variables, as appropriate. One-way ANOVA non-parametric test (Kruskal-Wallis test) and Dunn test were performed for multiple comparisons. The Chi-squared test was used for categorical variables. The Kaplan-Meier estimator test was used for survival analysis, and the hazard ratio (Mantel-Haenszel) was calculated. A p value less than 0.05 was considered statistically significant. Statistical analysis was performed by GraphPad Prism 9 software.

This research project is funded by Tuscany Region.

The study was conducted according to the guidelines of the Declaration of Helsinki and approved by the Ethics Committee of Comitato Etico Area Vasta Sud Est, Tuscany (Markerlung, 17431). 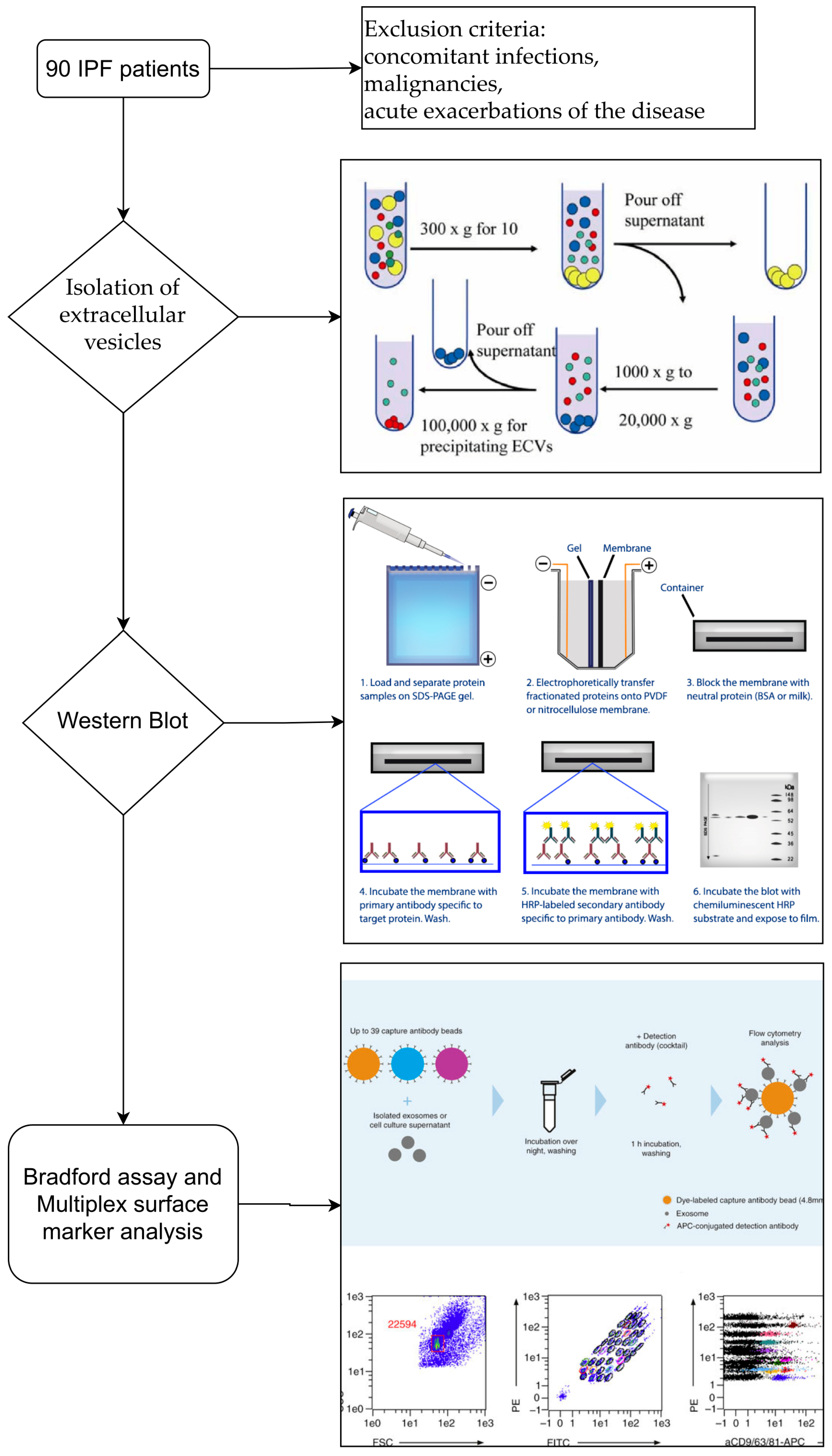 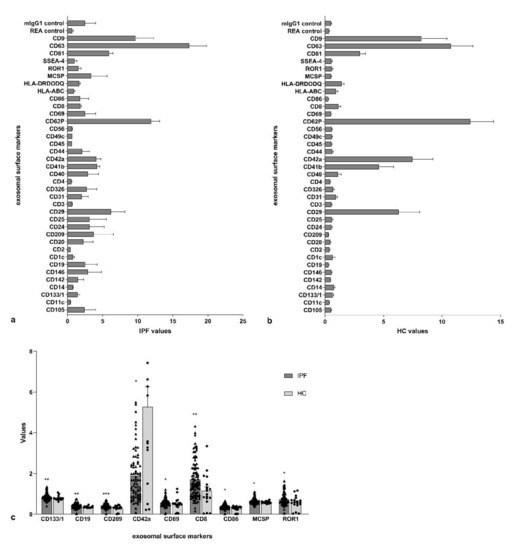 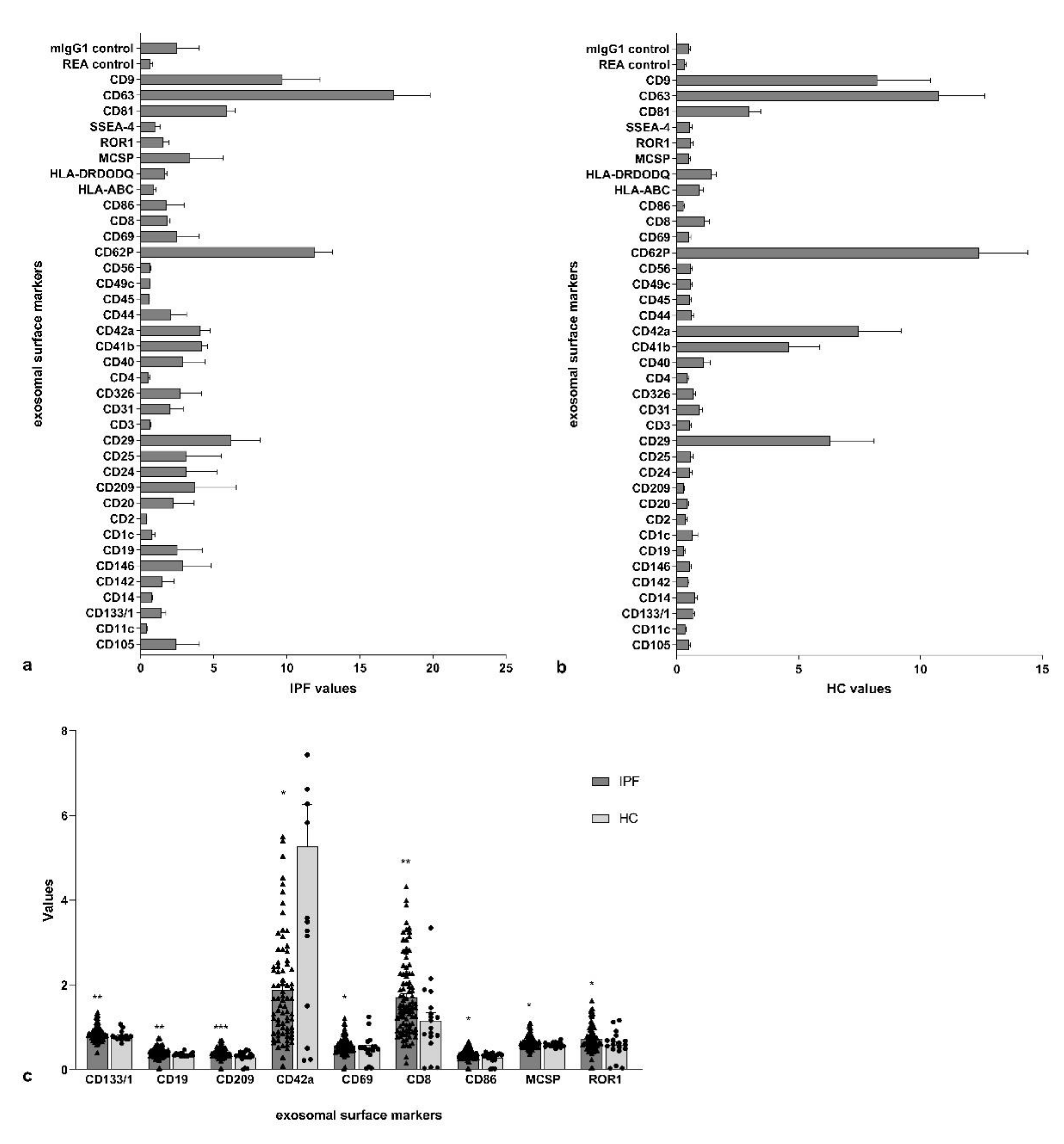