Growth hormone (GH) is secreted by the pituitary gland, and in addition to its classical functions of regulating height, protein synthesis, tissue growth, and cell proliferation, GH exerts profound effects on metabolism. In this regard, GH stimulates lipolysis in white adipose tissue and antagonizes insulin’s effects on glycemic control. During the last decade, a wide distribution of GH-responsive neurons were identified in numerous brain areas, especially in hypothalamic nuclei, that control metabolism. The specific role of GH action in different neuronal populations is now starting to be uncovered, and so far, it indicates that the brain is an important target of GH for the regulation of food intake, energy expenditure, and glycemia and neuroendocrine changes, particularly in response to different forms of metabolic stress such as glucoprivation, food restriction, and physical exercise. The objective of the present review is to summarize the current knowledge about the potential role of GH action in the brain for the regulation of different metabolic aspects. The findings gathered here allow us to suggest that GH represents a hormonal factor that conveys homeostatic information to the brain to produce metabolic adjustments in order to promote energy homeostasis. View Full-Text
Keywords: cytokines; energy balance; GH; glucose homeostasis; hypothalamus cytokines; energy balance; GH; glucose homeostasis; hypothalamus
►▼ Show Figures 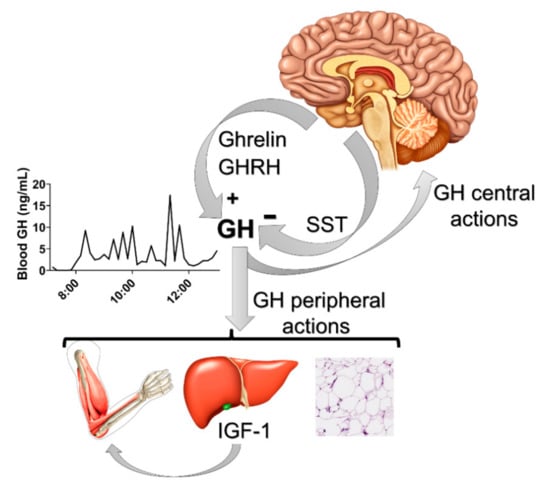