When drought occurs during the soybean (Glycine max L. Merr.) sowing period, emergence will most likely be affected. We evaluated a diverse panel of 373 plant introductions under controlled environmental conditions for primary root length (PRL) (at 100, 80, 60, 40, and 20% pot water holding capacity (PWHC); pots filled with potting soil that contained Sphagnum peat moss (>50%), bark, and perlite), and time taken for radicle emergence (TRE). The PRL decreased ≥75% at 40% PWHC, compared to 100, 80, and 60% PWHC. No genotypes germinated at 20% PWHC. We identified superior genotypes in terms of PRL and TRE, and found a positive relationship between PRL and emergence that became stronger with decreases in soil moisture levels. This indicates the importance of PRL in improving emergence, which becomes greater with decreases in soil moisture levels or increases in severity of drought. Seed weight was not related to PRL and emergence, indicating that larger seeds will not necessarily have longer PRL and better emergence. As the soybean panel used in this study was previously assessed for traits associated with drought tolerance at the late-vegetative and flowering stages, and the present study assessed it for putative traits related with emergence under various soil moisture conditions, the panel will become an important resource for soybean improvement. View Full-Text
Keywords: soybean; primary root length; emergence; moisture stress; radicle emergence; seed weight; variety development soybean; primary root length; emergence; moisture stress; radicle emergence; seed weight; variety development
►▼ Show Figures 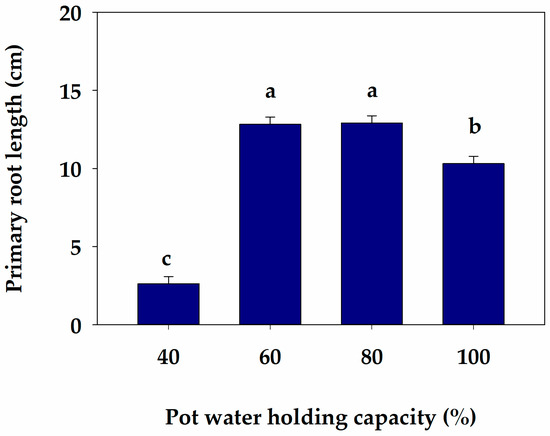