Phosphorus (P) is an essential nutrient for crop production, while most soil P is the less labile P associated with Aluminum (Al) and Iron (Fe) in acidic soils of Japan. The objectives of this study were to evaluate the effects of two contrasting P-efficient legumes (white lupin, WL (Lupinus albus L.); and groundnut, GN (Arachis hypogaea L.)) on rhizosphere soil P dynamics in different soil types of Japan, such as Al-rich volcanic-soil, Fe-rich red-yellow-soil, and sandy-soil, with or without historical fertilization managements (3 soil types × 2 managements = 6 soil samples). We conducted a 56-day pot experiment, and analyzed the plant P uptake and fractionated P of rhizosphere and bulk soils, based on the Hedley-fractionation method. We observed that GN P uptake was generally larger than that in WL in most soil types and managements. WL significantly decreased the labile P in most soils and also decreased the less labile inorganic P (Pi) and organic P (Po) in fertilized Red-yellow-soil, which has much crystalline Fe, though GN did not. In contrast, both WL and GN significantly decreased the less labile Pi in fertilized volcanic-soil, which has much non-crystalline Al. These results indicate that (1) characteristics of less labile P uptake by P efficient legumes were different between the soil types and managements, and (2) WL efficiently solubilized the less labile P than GN in fertilized red-yellow soil, while GN efficiently absorbed the larger amount of P than WL, especially in volcanic- and sandy-soil. View Full-Text
Keywords: P fractionation; white lupin; groundnut; rhizosphere; soil properties P fractionation; white lupin; groundnut; rhizosphere; soil properties
►▼ Show Figures 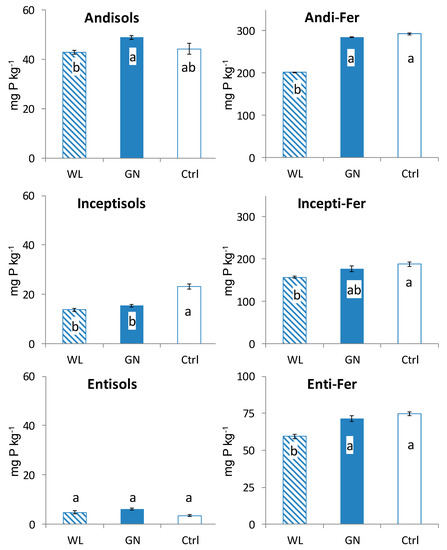