Soil nutrient deficiency and rainfall variability impair the production of sorghum (Sorghum bicolor (L). Moench) in Sudano-Sahelian zone. The aim is to study the environmental factors that can determine the effect of fertilizer application on sorghum grain yield and to formulate tailored fertilization strategies according to sorghum varieties (hybrid and open pollinated improved varieties) and environmental context. Field experiments were conducted during the 2015 and 2016 growing seasons in Nioro du Rip and in Sinthiou Malème (Senegal). In a randomized complete block design arranged in a split-plot with four replications, three factors were tested: sorghum genotype (G: Fadda, Faourou, Soumalemba and Soumba with different cycle lengths), environment (E: irrigation and rainfed, different soil types and fertility levels), and fertilization management (M: five different combinations of application dose and application time) including T1 = no fertilizer applied; T2 (recommended practice, 100%) = 150 kg/ha of NPK (15-15-15) at emergence + 50 Kg/ha of urea (46%) at tillering + 50 kg/ha of urea at stem extension; T3 = 50% T2; T4 (100% delay) = 150 kg/ha of NPK +50 kg/ha of urea at stem extension +50 kg/ha of urea at heading ; T5 = 50% T4. Results showed that: (i) in most environments, stressed plants under late application treatments (T4 and T5) recovered biomass once the fertilizer was applied (ii); grain yield with T5 was higher than with T4 under well-watered conditions (sufficient and well distributed rainfall and eventual complementary irrigations) ; (iii) Fadda, a hybrid, responded differently to fertilization than the other varieties only for biomass production, (iv) late fertilizer application treatment (T4) gave higher grain yield than the recommended practice (T2) in the environment with low yield potential, and (v) long cycle duration genotypes benefited better from late fertilization compared to short cycle duration genotypes. This study showed that under Sudano-Sahelian conditions late fertilization of sorghum can be beneficial to grain yield if the rainy season has a slow start, depending on sorghum genotypes (i.e., cycle length), and on the initial N content of the soil. View Full-Text
Keywords: late fertilization strategies; environmental conditions; sorghum; Sudano-Sahelian zone late fertilization strategies; environmental conditions; sorghum; Sudano-Sahelian zone
►▼ Show Figures 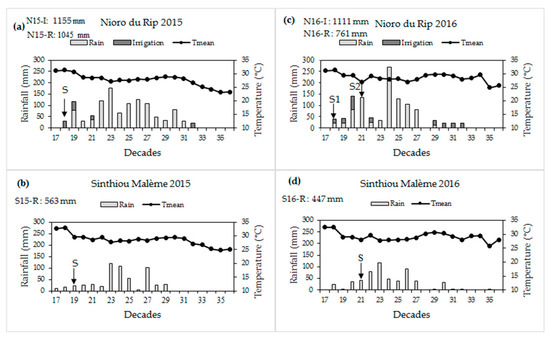