First Report of Amaranthus hybridus with Multiple Resistance to 2,4-D, Dicamba, and Glyphosate

Conyza canadensis is a species invading large areas throughout the world, mainly due to its ability to evolve herbicide resistance. In Hungary, extensive areas have been infested by this species due to the difficulty in controlling it with glyphosate. To determine whether poor control was a result of misapplication or glyphosate resistance, eight suspected glyphosate-resistant C. canadensis populations from different Hungarian regions were studied. In whole-plant dose-response assays with glyphosate, the LD50 and GR50 values (survival and fresh weight reduction at 50% relative to the untreated control, respectively) indicated that resistance was confirmed in five of the eight populations (H-5 population being the most resistant). Additionally, the shikimic acid accumulation tests corroborated the results observed in the dose–response assays. 11 alternative herbicides from six different modes of action (MOA) were applied at field doses as control alternatives on populations H-5 and H-6 (both in the same regions). The H-5 population showed an unexpected resistance to flazasulfuron (ALS-inhibitor). The ALS enzyme activity studies indicated that the I50 for H-5 with flazasulfuron was 63.3 times higher compared to its correspondent susceptible population (H-6). Therefore, the H-5 population exhibited multiple-resistance to flazasulfuron and glyphosate, being the first case reported in Europe for these two MOA. View Full-Text
Keywords: ALS-inhibitors; horseweed; multiple-resistance; alternative chemical control ALS-inhibitors; horseweed; multiple-resistance; alternative chemical control
►▼ Show Figures 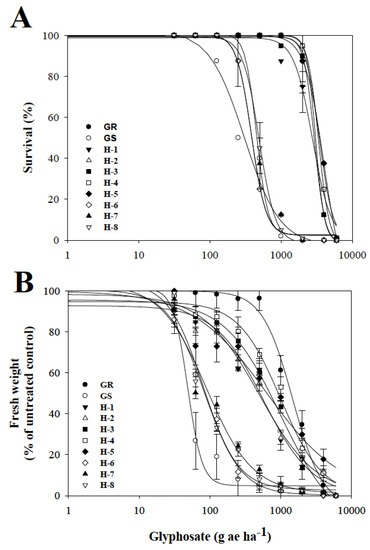