First Report of Amaranthus hybridus with Multiple Resistance to 2,4-D, Dicamba, and Glyphosate

In many countries, Amaranthus hybridus is a widespread weed in agricultural systems. The high prolificacy and invasive capacity as well as the resistance of some biotypes to herbicides are among the complications of handling this weed. This paper reports on the first A. hybridus biotypes with resistance to auxinic herbicides and multiple resistance to auxinic herbicides and the EPSPs inhibitor, glyphosate. Several dose response assays were carried out to determine and compare sensitivity of six population of A. hybridus to glyphosate, 2,4-D, and dicamba. In addition, shikimic acid accumulation and piperonil butoxide effects on 2,4-D and dicamba metabolism were tested in the same populations. The results showed four populations were resistant to dicamba and three of these were also resistant to 2,4-D, while only one population was resistant to glyphosate. The glyphosate-resistant population also showed multiple resistance to auxinic herbicides. Pretreatment with piperonil butoxide (PBO) followed by 2,4-D or dicamba resulted in the death of all individual weeds independent of herbicide or population. View Full-Text
Keywords: herbicide resistance; amarantaceae; smooth pigweed herbicide resistance; amarantaceae; smooth pigweed
►▼ Show Figures 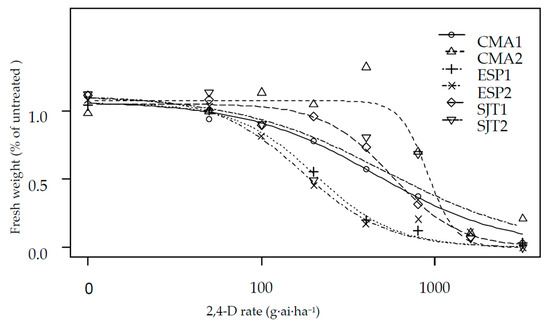