Does Nitrogen Matter for Legumes? Starter Nitrogen Effects on Biological and Economic Benefits of Cowpea (Vigna unguiculata L.) in Guinea and Sudan Savanna of West Africa
Next Article in Special Issue

Pod Shattering: A Homologous Series of Variation Underlying Domestication and an Avenue for Crop Improvement
Previous Article in Journal

The Impact of Genetic Changes during Crop Domestication

Humans have domesticated hundreds of plant and animal species as sources of food, fiber, forage, and tools over the past 12,000 years, with manifold effects on both human society and the genetic structure of the domesticated species. The outcomes of crop domestication were shaped by selection driven by human preferences, cultivation practices, and agricultural environments, as well as other population genetic processes flowing from the ensuing reduction in effective population size. It is obvious that any selection imposes a reduction of diversity, favoring preferred genotypes, such as nonshattering seeds or increased palatability. Furthermore, agricultural practices greatly reduced effective population sizes of crops, allowing genetic drift to alter genotype frequencies. Current advances in molecular technologies, particularly of genome sequencing, provide evidence of human selection acting on numerous loci during and after crop domestication. Population-level molecular analyses also enable us to clarify the demographic histories of the domestication process itself, which, together with expanded archaeological studies, can illuminate the origins of crops. Domesticated plant species are found in 160 taxonomic families. Approximately 2500 species have undergone some degree of domestication, and 250 species are considered to be fully domesticated. The evolutionary trajectory from wild to crop species is a complex process. Archaeological records suggest that there was a period of predomestication cultivation while humans first began the deliberate planting of wild stands that had favorable traits. Later, crops likely diversified as they were grown in new areas, sometimes beyond the climatic niche of their wild relatives. However, the speed and level of human intentionality during domestication remains a topic of active discussion. These processes led to the so-called domestication syndrome, that is, a group of traits that can arise through human preferences for ease of harvest and growth advantages under human propagation. These traits included reduced dispersal ability of seeds and fruits, changes to plant structure, and changes to plant defensive characteristics and palatability. Domestication implies the action of selective sweeps on standing genetic variation, as well as new genetic variation introduced via mutation or introgression. Furthermore, genetic bottlenecks during domestication or during founding events as crops moved away from their centers of origin may have further altered gene pools. To date, a few hundred genes and loci have been identified by classical genetic and association mapping as targets of domestication and postdomestication divergence. However, only a few of these have been characterized, and for even fewer is the role of the wild-type allele in natural populations understood. After domestication, only favorable haplotypes are retained around selected genes, which creates a genetic valley with extremely low genetic diversity. These “selective sweeps” can allow mildly deleterious alleles to come to fixation and may create a genetic load in the cultivated gene pool. Although the population-wide genomic consequences of domestication offer several predictions for levels of the genetic diversity in crops, our understanding of how this diversity corresponds to nutritional aspects of crops is not well understood. Many studies have found that modern cultivars have lower levels of key micronutrients and vitamins. We suspect that selection for palatability and increased yield at domestication and during postdomestication divergence exacerbated the low nutrient levels of many crops, although relatively little work has examined this question. Lack of diversity in modern germplasm may further limit our capacity to breed for higher nutrient levels, although little effort has gone into this beyond a handful of staple crops. This is an area where an understanding of domestication across many crop taxa may provide the necessary insight for breeding more nutritious crops in a rapidly changing world. View Full-Text
Keywords: domestication; crops; crop wild relatives; genetic diversity domestication; crops; crop wild relatives; genetic diversity
►▼ Show Figures 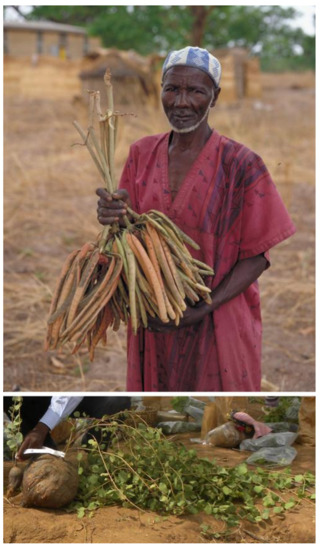