Is Endophyte-Plant Co-Denitrification a Source of Nitrous Oxides Emission? —An Experimental Investigation with Soybean
Next Article in Special Issue

Wild emmer wheat (Triticum turgidum ssp. dicoccoides) is the wild ancestor of all cultivated tetraploid and hexaploid wheats and harbors a large amount of genetic diversity. This diversity is expected to display eco-geographical patterns of variation, conflating gene flow, and local adaptation. As self-replicating entities comprising the bulk of genomic DNA in wheat, retrotransposons are expected to create predominantly neutral variation via their propagation. Here, we have examined the genetic diversity of 1 Turkish and 14 Israeli populations of wild emmer wheat, based on the retrotransposon marker methods IRAP and REMAP. The level of genetic diversity we detected was in agreement with previous studies that were performed with a variety of marker systems assaying genes and other genomic components. The genetic distances failed to correlate with the geographical distances, suggesting local selection on geographically widespread haplotypes (‘weak selection’). However, the proportion of polymorphic loci correlated with the population latitude, which may reflect the temperature and water availability cline. Genetic diversity correlated with longitude, the east being more montane. Principal component analyses on the marker data separated most of the populations. View Full-Text
Keywords: Triticum turgidum ssp. dicoccoides; wild emmer wheat; IRAP; REMAP; genetic diversity Triticum turgidum ssp. dicoccoides; wild emmer wheat; IRAP; REMAP; genetic diversity
►▼ Show Figures 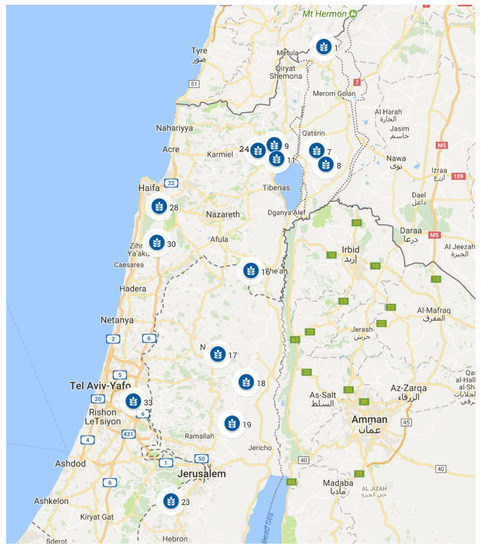