Phacelia tanacetifolia, an excellent cover, green manure and honey crop is now widely cultivated throughout the world. One of its principal European seed production regions is north-western Hungary, where the recent withdrawal of a potent herbicide, linuron, created a new challenge for many growers. The goal of this study is to identify the main factors determining weed species composition in the phacelia fields of the region and to assess the efficiency of tine harrow and clopyralid herbicide in reducing weed abundance and biomass. We carried out a series of weed surveys across the study region following a two-level design: (i) we estimated the cover of all weed species in 205 fields (broad-scale survey, BS); and (ii) in 22 of these fields, we provided more precise biomass measurements (counting the individuals and measuring the dry weights of all weed species) in microplots samples (fine-scale survey; FS). To characterize the fields, 34 background variables were also collected for all of the studied fields. In both investigations, Chenopodium album was by far the most abundant weed. Within the BS, using a minimal adequate model containing 11 terms with significant net effects, 20.93% of the total variation in weed species data could be explained. The variation in species composition was determined by environmental factors (soil pH, clay and K; precipitation and temperature), non-chemical management variables (crop cover, preceding crop, irrigation and tillage system) and herbicides (linuron and clopyralid). Variation partitioning demonstrated the dominance of environmental and cultural components in shaping the weed species composition. Although the effect of mechanical treatments was most likely masked in the BS by the soil properties, our FS suggests that tine harrow could efficiently decrease the total number and biomass of weeds and can be a useful tool in the phacelia management of the future. View Full-Text
Keywords: agroecology; arable fields; alternative crops; weed flora; weed management agroecology; arable fields; alternative crops; weed flora; weed management
►▼ Show Figures 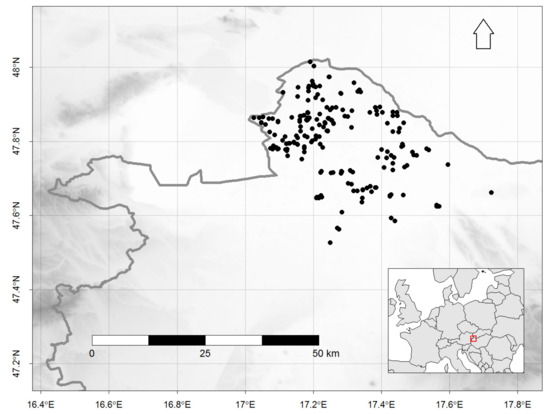