Field trials were conducted to evaluate the effect of nitrogen level on wheat protein content and composition in 16 cultivars over two years at three locations. The nitrogen treatment comprised two nitrogen levels, 0 kg ha−1 as low and 100 kg ha−1 as high nitrogen, applied as top dressings of 50 kg nitrogen per ha at tillering and stem extension growth stages. Increased nitrogen level generally enhanced grain protein by 11.3% (11.5% vs. 12.8%). Considering protein composition determined by reversed phase–high-pressure liquid chromatography, higher nitrogen supply generally enhanced the proportion of total gliadins, α-gliadins, γ-gliadins and high-molecular-weight glutenin subunits by 1.1%, 2.0%, 3.7%, 0.6% and 0.9%, respectively, and reduced albumins and globulins, ω-gliadins, total glutenins and low-molecular-weight glutenin subunits by 1.1%, 1.7%, 1.9% and 3.2%. Under a high nitrogen level, the historical cultivars Libellula, San Pastore and U-1 had a higher protein content (13.1–15.2%) with significantly higher total gliadins, which resulted in a significantly higher gliadin/glutenin ratio (1.68–1.92). In the modern cultivars, protein content varied between 11.4% and 14.6% with a well-balanced gliadin/glutenin ratio (1.08–1.50), except for cultivar MV Nemere which had a high gliadin/glutenin ratio at both nitrogen levels (1.81 vs. 1.87). In summary, increasing nitrogen level enhanced grain protein content while the composition of gliadin and glutenin fractions was changed to a lesser extent and was largely cultivar specific and therefore should be considered for wheat baking quality assessment and breeding purposes.
Keywords: wheat; cultivars; nitrogen fertilization; environment; proteins; reversed phase–high-pressure liquid chromatography wheat; cultivars; nitrogen fertilization; environment; proteins; reversed phase–high-pressure liquid chromatography

Among dominant grain cereals produced for human food consumption, common wheat (Triticum aestivum L.) is one of the most important. Yield and quality of wheat grain are dependent on genotype, soil fertility, growing conditions and crop nutrition. Bread wheat yield potential is largely genetically determined and varies significantly as a result of differences in climate and adequate production systems, which include mineral fertilization [1,2]. Utilization of nitrogen fertilization has many benefits. Nitrogen (N) is necessary for wheat growth, and crop yield and quality depend upon a sufficient input of N. A satisfactory supply of N is essential for the grain protein accumulation that is necessary for baking and processing quality [3,4]. Grain protein content is an important factor defining wheat end-use quality and usually varies between 6 and 19% and has an impact on the grading of flour quality for traditional bread making and other food products [5,6]. In Croatia, in accordance with the “Regulation on quality parameters and quality classes of wheat in the purchase of wheat (2018)”, in the formation of the market price, the final and decisive parameter is protein content (%) and, accordingly, wheat produced exclusively for purchase in the territory of the Republic of Croatia is classified into four qualitative classes: premium (>15%), I class (13.5–14.99%), II class (12–13.49%), III class (10.5–11.99) and IV class (<10.49%). According to their solubility characteristics, wheat grain proteins are classified as albumins and globulins (AGs), gliadins (GLIs) and glutenins (GLUs). GLIs and GLUs are the two main groups of gluten proteins, the endosperm storage proteins, accounting for 60~80% of the total grain proteins. Gluten proteins influence dough rheological properties that determine the processing quality of bread, noodles and cookies [7,8,9]. GLIs belong to the monomeric prolamin fraction, and are classified into three structural groups of polypeptides according to their electrophoretic mobility, α/β-, γ- and ω-GLI. The polymeric glutenin fraction is constituted of high-molecular-weight (HMW-GS) and low-molecular-weight glutenin subunits (LMW-GS) linked with intermolecular disulphide bonds. The gluten protein accumulation during the grain filling period is largely influenced by environmental growing conditions, particularly N availability. However, the type and distribution of gluten subunits have a strong genetic component [10,11]. It is reported that the composition of the protein fractions is more influenced by the N nutrition than by temperature [12].
Grain nitrogen content plays an important role affecting the ratio of storage to non-storage proteins, the percentage of the storage protein fractions and, thus, the GLI/GLU ratio and the ratio of HMW-GS/LMW-GS [8,11,13]. To obtain the maximum wheat potential in the field, N is the most limiting nutrient required by plants. The growth of wheat plants begins with protein reserves of the kernel, which serve to maintain the germination and further growth of the seedling until the first leaf appears. After rootlets are developed, additional N is obtained by the rootlet system and at this stage the N uptake is limited by root size. In the Northern Hemisphere, it is considered necessary to administer a first application of N fertilizer before the second leaf emerges. A second important time for N application is the tillering stage, when the N concentration in the tissue impacts the formation of the tillers in each plant. The third N application is the most important and it is critical for biomass formation during the extension stage and later for promoting protein accumulation [4,13].
In Croatia, the annual wheat production was 820,682 t in the last 10 years (2009–2018), with 5.12 t ha−1 [14]. Since producers in Croatia get a higher price for premium quality wheat (grain protein content above 15%), it is desirable to select high-quality cultivars that offer a competitive advantage by minimizing yield penalty in environments that are not classified as high yielding. A few studies regarding bread-making quality and environmental influence on gluten proteins are being done continuously. However, comprehensive research on nitrogen’s influence in different environments on protein content and composition has not been carried out so extensively. Therefore, the hypothesis and objective of this study is to determine the quantitative changes of quality-related proteins in historical and currently grown wheat cultivars grown in different agro-ecological conditions at two N fertilization levels in order to assess if there is a specific cultivar reaction with nitrogen treatment in terms of their quality potential for breeding and technological purposes.

Sixteen winter wheat cultivars were evaluated in field trials under two N fertilization levels during two consecutive seasons (2016/17 and 2017/18) at three locations (Osijek, Zagreb and Poreč) representing different agro-ecological conditions and soil types in Croatia. The panel was assembled to represent the historical and current significance of cultivars in production in Croatia and their parental contributions. The cultivar list, year of registration and their country of origin and breeding institution are listed in Table 1.
Each of the six field experiments was set up in a split-plot factorial design in three replications with N fertilization levels as the main plots and 16 wheat cultivars as sub-plots. The harvested plot size was 7.56 m2 at Osijek and Poreč and 4.95 m2 at Zagreb. Seeding level was 350 kernels m−2 in all trials and for all cultivars. Buffer plots were planted between the main N treatment plots. Basic fertilization before sowing of 74 kg N ha−1, 80 kg P2O5 ha−1 and 120 kg K2O ha−1 was applied by adding 100 kg ha−1 of urea (46% N) and 400 kg ha−1 NPK (7:20:30).
The N treatment comprised two N fertilization levels, 0 kg N ha−1 as low N and 100 kg N ha−1 as high N, applied as top dressings of 50 kg N ha−1 at tillering (GS23-25 after Zadoks et al. (1974)) and stem extension (GS33-35) growth stages. All other cultural practices, including application of herbicides, insecticides and fungicides to control major weeds, insects and foliar diseases, were typical for commercial wheat production in Croatia. Total N fertilizer application in commercial wheat production varies from 120–180 kg of N ha−1. Descriptions of the soil type, soil N content and N fertilization levels for N0 and N100 treatments for the six location–season combinations are given in Table S1 (Supplementary Materials).
Osijek and Zagreb locations are classified as having a moderately warm and rainy oceanic climate (Cfb), while the Poreč location is classified as having humid subtropical climate (Cfa) by the Köppen and Geiger climate classification [15]. Basic meteorological data for all locations for 2016/17 and 2017/18 and multi-annual averages are provided in Supplementary File Table S5. On average, during both seasons, Osijek was the driest and coolest site, while Poreč was the warmest and had the highest amount of rainfall. Zagreb had the highest amount of precipitation and the lowest average temperature only in the 2017/18 season (Table S5, summary in Supplementary Materials).

Prior to the reversed phase–high-pressure liquid chromatography (RP-HPLC) analysis, the single protein fractions were sequentially extracted according to Wieser et al. [12] with some modifications. Briefly, 50 mg of wholemeal flour (Retsch Centrifugal Mill ZM1, Haan, Germany, equipped with 1 mm sieve) were extracted by 1 mL of 0.4 M NaCl for 30 min at RT (albumin/globulin (AG) extract). From the remaining pellet, the gliadins (GLIs) were extracted with 1 mL of 50% 1-PrOH for 60 min at RT and, finally, the glutenins (GLUs) were extracted with 1 mL of a solution containing 50% (v/v) 1-PrOH, 2 M urea, 1% (w/v) dithioerythritol and 0.05 M Tris-HCl (pH 7.5) for 60 min at 60 °C. During all extractions, the suspensions were vortexed for 1 min every 10 min and then centrifuged for 15 min at 14,000 rpm and RT. The obtained supernatants were stored at −20 °C and filtered through a 0.45 μm PVDF syringe filter prior to HPLC analysis. Two extractions were performed for each sample.

Extracted wheat proteins were analysed according to the method of Wieser et al. [12] using high-performance liquid chromatography (HPLC) (Perkin Elmer Instruments, Waltham, MA, USA) coupled with Total-Chrom software and a photodiode array detector. Elution was performed with linear gradient of acetonitrile (ACN/0.1%TFA) in water (H2O/0.1%TFA) from 24–54% in 30 min at flow rate of 1 mL min−1 and column temperature of 50 °C. Proteins were separated on a C18 reverse phase column (5 μm 4.6 × 150 mm; Sigma-Aldrich Chemie GmbH, Steinheim, Germany). Quantification of protein fractions was based on measuring their peak area at 210 nm. The peak areas under AG, GLI and GLU chromatograms were used for further calculations of their relative proportion (%) in total extracted proteins.

All statistical analysis was done in R (R Core Team 2013). Two linear models were employed as described by Cormier et al. [16]. Firstly, in all field trials (where N levels, year and location of testing were separated), least square means were calculated using cultivars as fixed factors. These adjusted means were used in the subsequent analyses using the following linear model:
Yijl is the phenotype of genotype i in location j and year k at N treatment level l (0 kg/ha and 100 kg/ha of N applied as top dressing), is the general mean, is the effect of N, is cultivar (genotype) effect, is the effect of environment (3 levels), is the year effect (2 levels), is the interaction term for all possible combinations and is residual error terms.
The differences among cultivar means were tested using Tukey’s HSD test (library emmeans). The statistical significance of the differences among main factors and treatments was tested using an LSD test at the level of probability p < 0.05.

Significant differences were found among analyzed wheat grain proteins depending on cultivars, nitrogen level and environment, as well as their interactions. Increasing N level enhanced grain P content and moved cultivars into a higher quality class, while the composition of quality-related GLI and GLU fractions was changed to a lesser extent and was strongly cultivar specific and therefore should be considered for wheat quality assessment and breeding purposes because higher grain protein concentrations are major targets of modern wheat breeding, together with well-balanced proportions of quality-related proteins. 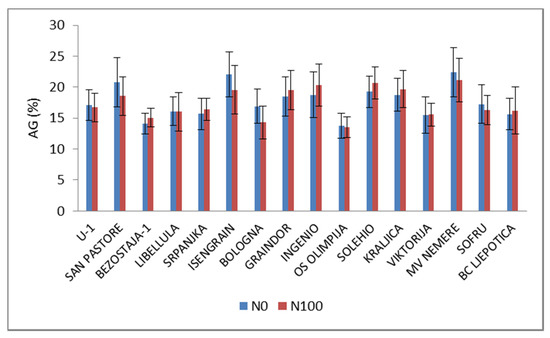