Water is one of the crucial factors for plant growth and development accounting for 80%–90% and over 50% of the fresh weight of herbaceous and woody plants, respectively [1]. Temporary water deficit in plants causes turgor loss and stomatal closure that inhibits basic metabolic processes, including photosynthesis. Excessive or constant water deficit generates reactive oxygen species (ROS) in plants, causing oxidative stress and photoinhibitory damage that eventually result in necrosis and programmed cell death [2,3,4]. In general, plants adapt to certain levels of water stress by promoting the biosynthesis of secondary metabolites with antioxidant properties. Water availability around the root zone directly affects the physiological and biochemical responses of plants. Therefore, controlling water content of the substrate is an important cultural practice that directly influences crop yield and quality in horticultural plant-production.
Crepidiastrum denticulatum H. is an annual or biennial species (family: Compositae) and grows naturally in East Asia and South Korea. It contains a large amount of bioactive compounds including various hydroxycinnamic acids (HCAs) such as chlorogenic acid, 3,5-di-O-caffeoylquinic acid (3,5-DCQA), chicoric acid and caftaric acid. Several previous studies have reported that C. denticulatum extracts have high anti-oxidative, anti-fatty liver and anti-obesity properties [5,6,7,8], and health functional foods for improving liver function have also been produced using the extract of C. denticulatum. One of the ecological characteristics of C. denticulatum is its sensitivity to the water condition around the root zone with soft rot diseases in the leaf often occurring under conditions of excessive water with frequent rainfall during summer. The occurrence of soft rot diseases was observed more often in wet soil compared to deeper and well-drained soil, resulting in the poor growth and quality of C. denticulatum [9].
The appropriate limitation of water supply to the root zone can be used as a cultivation technique to produce high-quality crops by promoting the biosynthesis of bioactive compounds without the inhibition of growth. In previous studies, temporary mild water stress did not inhibit the growth of lettuce, water dropwort and tomato, with a simultaneous increase in the content of polyphenolic compounds such as chicoric acid (in lettuce), anthocyanin (in water dropwort) and hydroxycinnamic acid and flavonoids (in tomato), which have antioxidant properties [10,11,12]. In addition, the biosynthesis of secondary metabolites in medicinal plants was also promoted by water deficit stress. For example, the content of hyperforin, the major bioactive compound in St. John’s wort, was increased by 200% at 12 days of water stress compared to that in the control [13]. Water deficit treatment with a 50% reduction in irrigation increased the silymarin content of milk thistle by 170% compared to that in the control [4,13]. Recently, greenhouses or plant factories capable of controlling the root environment using various water-related sensors have been established, and the demand for high value-added crops such as medicinal plants is increasing. However, little research has been reported on the proper conditions for such cultivation. In this respect, research on the favorable water content of the substrate is needed for the stable mass production of high-quality C. denticulatum as a raw material for pharmaceutical products or functional foods.
Therefore, the objective of this study was to evaluate the growth and content of bioactive compounds in C. denticulatum according to different water content levels of the substrate. Through this study, we determined the favorable water content level of the substrate for the stable mass production of high-quality C. denticulatum.

C. denticulatum seeds collected from Pyeongchang in Korea were sown according to the method described in Park et al. [14]. Seedlings were grown for 3 weeks in a growth chamber with the following conditions: air temperature, 20 °C; relative humidity, 60%; white LEDs, PPFD 200 µmol m−2 s−1; and light period; 16 h. Seedlings were transferred to a greenhouse for acclimation 3 days before transplanting. A total of 48 seedlings with 2–3 true leaves were transplanted into individual square plastic pots (10 × 10 × 11 cm; L × W × H) filled with commercial horticultural substrate (Myung-Moon, Dongbu Hannong Co., Seoul, Korea). The average air temperature and relative humidity of the greenhouse were 19.7 ± 0.1 °C; and 48.5 ± 0.5% (± S.E.), respectively, and average daily light integral was 9.1 ± 1.6 mol m−2 d−1 during the entire experimental period.

Four substrate water content levels of 20, 30, 45 and 60% were used and each level was maintained for 5 weeks starting 1 week after transplanting. Twenty-four soil water sensors (EC-5, METER group, Pullman, WA, USA) were inserted individually in 24 pots (six plants per treatment), and real-time data of volumetric water content (v/v) were collected via a data logger (CR 1000, Campbell Scientific, Logan, UT, USA) connected to the sensors. To measure the volumetric water content of the substrate, the soil water sensors were calibrated using a formula obtained from a preliminary study. The relay driver (SDM-16AC/DC, Campbell Scientific, Logan, UT, USA) connected with the data logger opened the solenoid valves of the irrigation line to supply the nutrient solution (nutrient solution for C. denticulatum, EC 2.0 dS m−1, pH 5.5) [14] to the pots when the volumetric water content measured by the soil water sensor was lower than the set value. Two drip pins connected with a pressure compensated emitter (2L/H, Netafim, Tel Aviv, Israel) were inserted into both sides of a pot to supply the nutrient solution evenly. Figure 1 shows the changes in the volumetric water content of the substrates with the different treatments during the entire experimental period.

Plant growth parameters were investigated at 5 weeks after transplanting. The shoot and root were separated at the basal end and the substrate of the roots was removed by washing under running water. The remaining water was blotted using paper towels. Fresh weights of the shoot and root were measured using an electronic scale (Si-234, Denver Instrument, Bohemia, NY, USA). Shoot dry weight was measured after freeze-drying at −75 °C; for over 72 h using a lyophilizer (Alpha 24 LSCplus, CHRIST, Osterode am Harz, Germany) and root dry weight was measured after hot-air drying at 70 °C; for over 72 h. Leaf length and leaf width of the largest leaf of the plants were measured using a ruler. The leaf shape index was calculated as leaf length/leaf width. The total leaf area was measured using a leaf area meter (LI-2050A, Li-Cor, Lincoln, NE, USA).

Photosynthetic rate, stomatal conductance and transpiration rate of C. denticulatum were measured using a portable photosynthesis system (LI-6400, LI-COR, Lincoln, NE, USA) for 2 h, starting at 10 a.m. (3 h after sunrise) 4 weeks after transplanting. The leaf chamber conditions were set at 24 °C; block temperature, 500 µmol mol−1 reference CO2, 400 µmol s−1 air flow and 308 µmol m−2 s−1 PPFD (average PPFD in the morning during the experiment). Six plants with fully expanded leaves per treatment were measured.
Shoots were freeze-dried after harvest and used for chlorophyll content analysis. Shoots were pulverized using a grinder (Tube Mill control, IKA, Wilmington, NC, USA). A sample of powder (40 mg) and 4 mL acetone (80%, v/v) was mixed, and then the mixture was sonicated for 15 min. The supernatant obtained by centrifugation at 15,000 × g for 2 min was diluted four times with acetone (80%, v/v). The absorbance of the solution was measured with a spectrophotometer (UV-1800, Shimadzu, Kyoto, Japan) at 663.6, 646.6 and 750 nm and chlorophyll a, chlorophyll b and chlorophyll a + b were calculated using the following equation [15].

The sap flow rate was measured to determine the effect of substrate water content on water absorption and transpiration. A micro sap flow sensor (MSF_UM, Telofarm, Seoul, Korea) was inserted into the stem of a fully expanded leaf at 4 weeks after treatment and data were continuously collected for 5 days. Sap flow values were recorded every 2 min by the data logger. 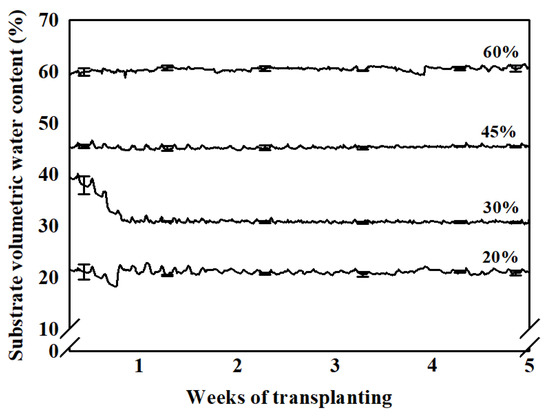 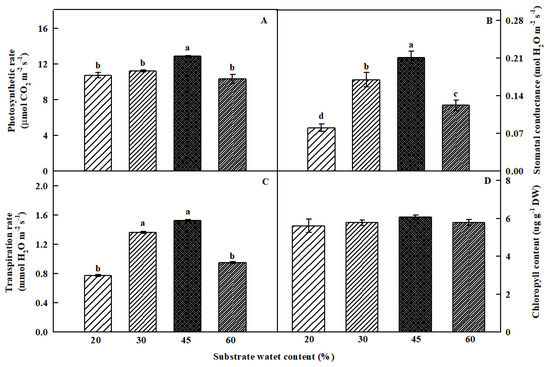