Giving a Second Opportunity to Tire Waste: An Alternative Path for the Development of Sustainable Self-Healing Styrene–Butadiene Rubber Compounds Overcoming the Magic Triangle of Tires
Previous Article in Journal

Silicone rubber (SR) has been widely used in high-voltage outdoor insulation due to the excellent hydrophobicity and weather-resistance [1,2,3]. Fillers are added into the pure SR to improve specific properties as well as to reduce cost [4,5,6]. So far, alumina tri-hydrate (ATH) is the most commonly used filler in the SR composite insulator [7,8]. However, the release of the hydrate from ATH can roughen the surface of the composite insulator causing further wetting and dry band arcing under long-term operation [9,10]. Therefore, it is of great importance to find substitute fillers to replace ATH applied in the SR composite insulator. As for SR composites applied in high-voltage insulation, the breakdown strength and dielectric loss are the two most important properties.
Mica is a natural mineral composed of a layered silicate structure with excellent electrical insulating properties, which has played a role as the reinforcement filler in different types of polymer composites [11,12,13]. However, due to the hydrophilicity, when mica is used as filler in the SR matrix, the poor filler-rubber compatibility could lead to the high dielectric loss, which limits the application of mica in the electrical insulation field. Silane coupling agents are the most popular surface modifier for the inorganic filler to improve the compatibility between the hydrophilic filler and hydrophobic rubber, further, to improve the performance of rubber composites [14,15,16]. Unfortunately, the active sites on the mica surface that could react with silane coupling agents are relatively few. Dopamine derivatives were reported to self-polymerize to form polydopamine, which can adhere to different kinds of materials [17,18,19,20], thus introducing plenty of catechol group active sites. Previously, we have successfully coated some inorganic fillers with polydopamine, which were further modified with secondary reaction because of the existing catechol groups of polydopamine [21,22]. Some recent reports also confirmed that polydopamine could be easily coated onto the surface of the nanoparticles [23,24,25].
In this work, mica was first coated with polydopamine to obtain mica-PDA, rendering mica with a large number of hydroxyl groups which react more easily with the silane coupling agent. Mica-PDA-filled SR composites (SR/mica-PDA-VTMS) were prepared with mica-PDA as a filler and with vinyl tri-methoxysilane (VTMS) as a silane coupling agent. For comparison, some other SR composites were also prepared and investigated to reveal the structure–property relationship of these SR composites.

Preparation of PDA-mica: 40 g mica was dispersed in 1 L water ultrasonically for 2 h, and then 0.375 g dopamine hydrochloride and 0.045 g Tris-HCl were added into the mixture, followed by adjusting pH to 8.5 using sodium hydroxide. The suspension mixture was stirred at room temperature for 12 h followed by being centrifuged and rinsed several times with water to obtain mica-PDA. Mica-PDA was dried in vacuum at 50 °C overnight before use.
Preparation of SR composites: filler (including ATH, mica, or mica-PDA) and other ingredients were mixed into the gum SR on a 6-in. two-roll mill to prepare SR compounds. To obtain SR composites, the compounds were cured in a standard mold using a hydraulic hot press at 160 °C and 15 MPa. The recipe (parts by weight) for the sample preparation was as follows: SR, 100.0; 2,5-bis(tert-butylperoxy)-2,5-dimethyl hexane (DBPMH), 0.5; filler, 150; VTMS, 0 or 1.5).

X-ray photoelectron spectroscopy (XPS) (ESCALAB 250, Thermo Fisher Scientific, Rochester, NY, USA) with a 150 W monochromatic Al Kα radiation was used to detect the chemical composition of the samples. The morphologies of the fillers and composites were observed by scanning electron microscopy (SEM) (SU8010, Hitachi Co. Ltd., Tokyo, Japan) at an accelerating voltage of 5 kV. The dielectric properties were measured using an impedance analyzer (6500B, Wayne Kerr Electronics, Shenzhen, China). Breakdown strength was recorded by a dielectric strength tester (HCDJC-50kV, Beijing Huace Testing Instrument Co. Ltd., Beijing, China) with a stepping voltage of 1 kV/s according to IEC 60243-1-2013, and equal-diameter electrodes with a diameter of 25 mm and samples with a thickness of 1 mm were used. Stress–strain test was performed on an electrical tensile tester (AI-7000S1, Goodtechwill Testing Machines, Co. Ltd., Qingdao, China) at a speed of 500 mm·min−1. All the measurements were conducted at 25 °C.

To effectively graft VTMS on the filler, polydopamine was coated on the surface of mica to provide more active sites (catechol groups). The chemical composition of mica-PDA XPS was probed by XPS. As shown in Figure 1a, as compared to mica, mica-PDA exhibits the characteristic N1s peak, indicating the deposition of the polydopamine coating on the filler, which is also confirmed by C1s and N1s core-level spectra. For the curved fitted C1s core-level spectrum of mica-PDA shown in Figure 1b, there are four peak components with the binding energy at 284.6 eV, 285.5 eV, 286.4 eV, and 288.5 eV, representing the C–H species, C–N species, C-O species, and O-C=O species, respectively [26,27,28]. Meanwhile, for the N1s core-level spectrum of mica-PDA shown in Figure 1c, two peak components at 398.5 eV and 399.5 eV are attributed to –N= species and –N–H species, respectively, which are formed by the indole groups via structure evolution during dopamine self-polymerization [29,30]. Furthermore, as shown in the TGA curves of mica and mica-PDA (Figure 1d), both mica and mica-PDA show the similar degradation behavior, while the weight loss between 200 and 600 °C for mica-PDA is slightly larger than that of mica due to the additional degradation from polydopamine. At 600 °C, mica and mica-PDA show a weight loss of 2.0% and 3.5%, respectively, indicating that the weight content of polydopamine in mica-PDA is 1.5%. Therefore, both XPS and TGA results confirm that polydopamine was successfully coated on the surface of mica in mica-PDA.
To prepare SR/mica-PDA-VTMS composites, mica-PDA (filler), VTMS (silane coupling agent), and DBPMH (curing agent) were added into SR through mechanical blending, followed by being cured at high temperature. Since catechol group active sites (through self-polymerized dopamine) have been introduced on mica-PDA, the reaction between the catechol groups and VTMS occurs (Sketch 1. reaction A), which results in the immobilization of the silane coupling agent on mica-PDA. At high temperature, the decomposition of DBPMH produces free radicals, which initiate the radical addition reactions between the –CH=CH2 groups on both SR and VTMS (Scheme 1. reaction B). As a result, mica-PDA filler particles should be chemically combined with the SR macromolecular chains, strengthening the filler–rubber interactions, as shown in Sketch 1.
SEM images of ATH and mica powder are shown in Figure 2a,b, it can be seen that the ATH particles with a diameter of ~2 μm possess the relative regular structure as compared to the mica plates with a length of ~5 μm. It is easy to distinguish ATH and mica from the shape of the particles even when either of them is embedded in the SR matrix. SEM images of the tensile fracture surfaces for the prepared SR composites are shown in Figure 2c–h. It is found that the ATH particles’ aggregates are exposed on the fracture surfaces and some voids are observed in the SR/ATH composite (Figure 2c), indicating the weak adhesive force between SR and ATH. For comparison, SR/ATH-VTMS composite (Figure 2d) displays fewer aggregates and voids resulting from the improved interfacial interactions between filler and rubber with the assistance of VTMS. A similar comparison is also found between the SR/mica (Figure 2e) and SR/mica-VTMS composites (Figure 2f), confirming the enhanced interfacial interactions between filler and rubber by adding VTMS. Nevertheless, there exist more voids and larger cracks between the interfaces for the SR/mica-VTMS composite compared to those for the SR/ATH-VTMS composite. This could be attributed to the following factors: (i) the aspect ratio of mica is larger than that of ATH, which makes it more difficult to be covered by rubber macromolecules; (ii) compared with ATH, mica has fewer active sites on the surface that can react with VTMS, resulting in the poorer silane coupling modification effect. After being coated by polydopamine on the surface of mica, filler dispersion is improved for the SR/mica-PDA composite (Figure 2g) because of the improved compatibility between the filler and rubber [31]. However, due to the physical interface, the interactions between filler and rubber are still too weak. Meanwhile, for the SR/mica-PDA-VTMS composite (Figure 2h), a significant improvement on both filler dispersion and interfacial interactions are confirmed through morphology observation. Such improvement should be attributed from the formation of the chemical binding between filler and rubber, which has been illustrated in Sketch 1. 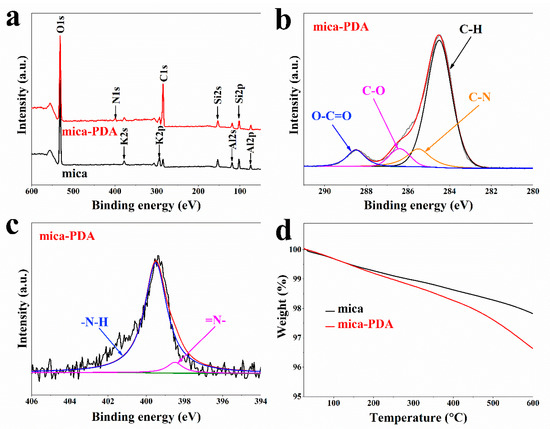 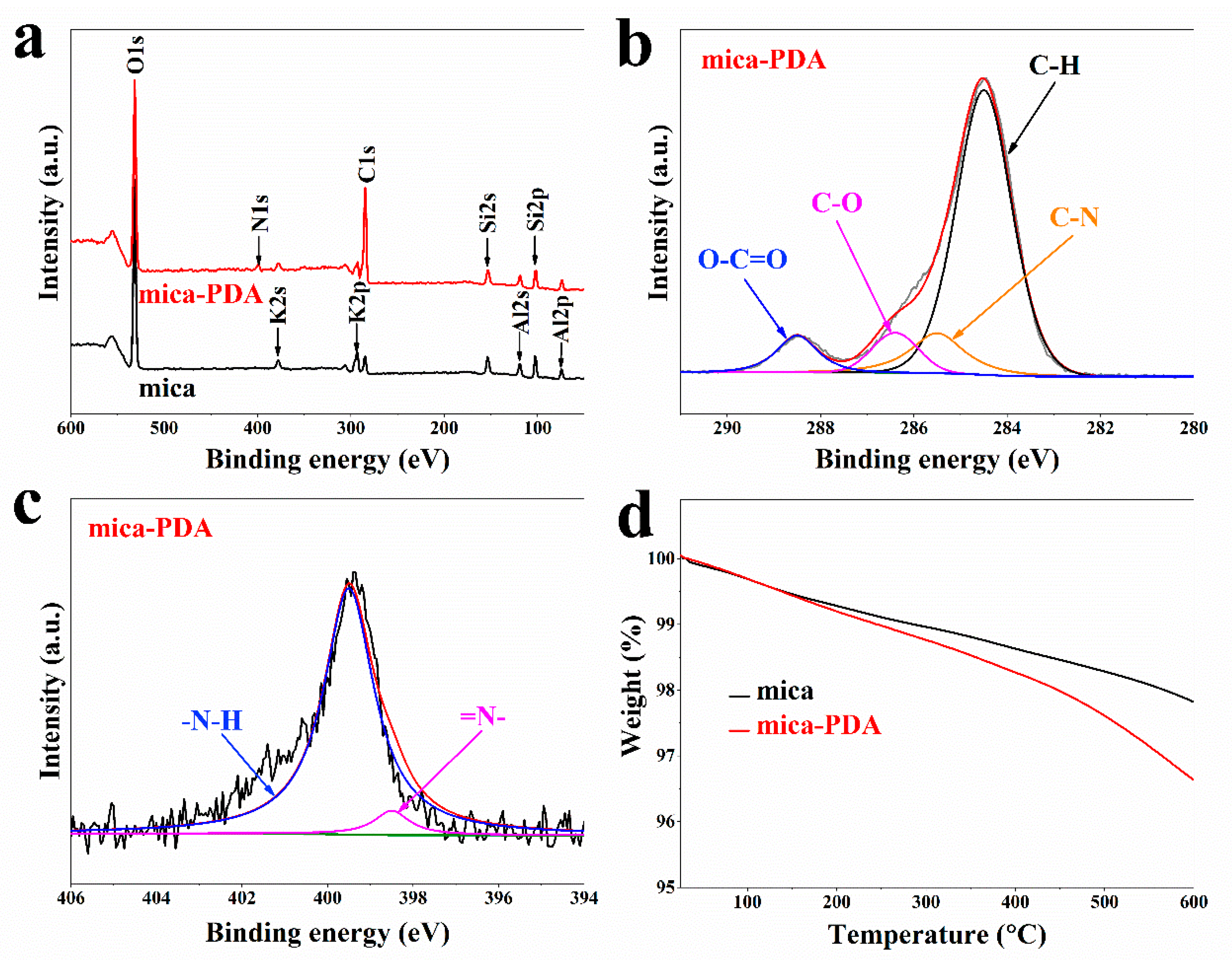 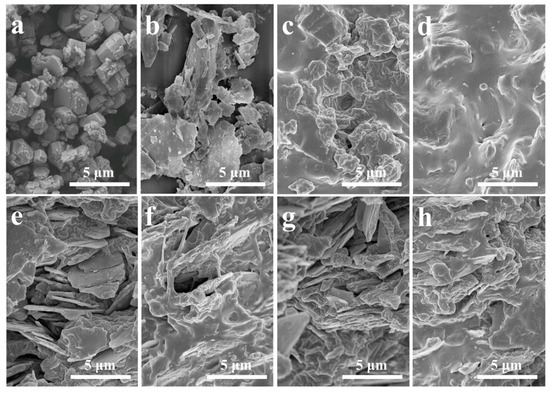 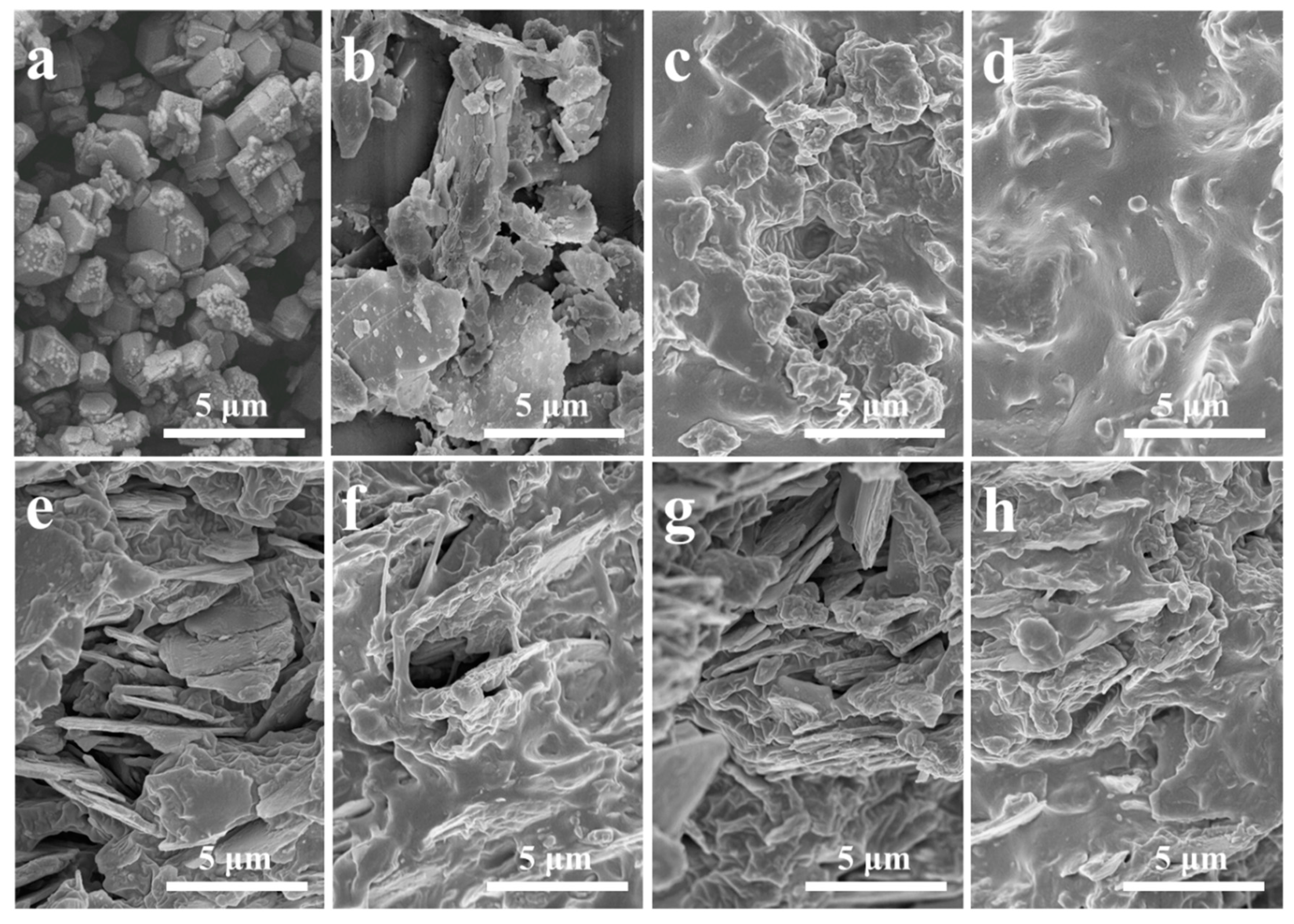 Table 1. Mechanical properties of SR composites.
Table 1. Mechanical properties of SR composites.
© 2019 by the authors. Licensee MDPI, Basel, Switzerland. This article is an open access article distributed under the terms and conditions of the Creative Commons Attribution (CC BY) license (http://creativecommons.org/licenses/by/4.0/).
We use cookies on our website to ensure you get the best experience. Read more about our cookies here.
Accept
We have just recently launched a new version of our website. Help us to further improve by taking part in this short 5 minute survey here. here.
Never show this again