Synchrotron X-ray radiation Laue diffraction is a widely used diagnostic technique for characterizing the microstructure of materials. An exciting feature of this technique is that comparable numbers of reflections can be measured several orders of magnitude faster than using monochromatic methods. This makes polychromatic beam diffraction a powerful tool for time-resolved microstructural studies, critical for understanding pressure-induced phase transition mechanisms, by in situ and in operando measurements. The current status of this technique, including experimental routines and data analysis, is presented along with some case studies. The new experimental setup at the High-Pressure Collaborative Access Team (HPCAT) facility at the Advanced Photon Source, specifically dedicated for in situ and in operando microstructural studies by Laue diffraction under high pressure, is presented.
Keywords: Laue diffraction; high pressure; mechanisms of phase transitions Laue diffraction; high pressure; mechanisms of phase transitions

White beam (polychromatic) Laue diffraction is a powerful experimental tool for studying mechanisms of pressure-induced phase transitions. Use of the full white beam spectrum allows for fast data collection, which then provides both spatially and time-resolved microstructural information to be gained simultaneously from a sample in Diamond Anvil Cell (DAC), with spatial resolution down to microns and time resolution down to seconds [1,2]. The alternative, using monochromatic beam diffraction, would not provide comparable time resolution, even with high X-ray energies, due to the need to rotate the sample while collecting X-ray images [3,4]. This makes total data collection time across the sample in a DAC substantially longer.
To some extent, the mechanisms of transitions can be determined by studying samples recovered at ambient pressure [5,6,7]. However, such samples may be substantially altered during the recovery process or undergo reversible phase transformations as pressure is released. In contrast, polychromatic beam diffraction makes it possible to determine the morphology, deformation and orientation relations of co-existing parental and product phases in real time in situ. Time-resolved measurements are vital for revealing details of phase transitions, which may be controlled by kinetics, and therefore require the fastest techniques of data collection.
Despite the fairly wide use of Laue diffraction for characterization of materials, including in situ studies of materials under external stress [8,9,10], the application of this technique for high-pressure DAC studies requires additional experimental development and consideration. The purpose of this review article is to summarize the currently available polychromatic beam diffraction experimental techniques at high pressure and data analysis capabilities at HPCAT, as well as to present some recent case studies.

The mechanism of the α → β transition in Si was studied using Laue diffraction [1]. In Figure 4, maps of coexisting parent and product phases at the onset of transition are presented (Figure 4a), along with map of the rest of parent α-Si single crystal (Figure 4b).
Microstructural changes that evolve over longer time periods in comparison to typical acquisition times of one translational scan can be better analyzed and viewed by combining composite frames from consecutive scans. As examples, movies (Movie S1a,b) compiled from composite frames shown in Figure 4 are presented in the Supplementary Materials. Movie S1a captures the splitting of the original single crystal of α-Si at the onset of transition into three crystals that are slightly mis-oriented with respect to one another, while the newly formed β-Si is located at the interface of these crystals. In Movie S1b, the disintegration of the rest of parental single crystal is shown.
The results of study of the mechanism of the α → β phase transition in Si [1] presented in Movie S1a indicate that the interface between the parental and product phases is highly incoherent. While the α-phase produced very sharp reflections, the β-phase produced highly broadened ‘streaky’ reflections, indicating that crystals of this phase were heavily deformed. Most likely, this is due to the large volume collapse accompanying this transition, which then resulted in large lattice mismatch between the parent and daughter phases. The areas of β-Si were strongly elongated domains formed parallel to a <110> direction of the parent α-Si phase. This may also indicate that the nucleation of the product phase could be controlled by defects introduced along the cleavage planes during the sample preparation. It is interesting to note that the single crystals of α-Si were slightly bent as the β-phase started growing. This is indicated by the systematic shift of positions of reflections from α-Si across the sample reproducible on the composite frames from adjacent translational scans. Toward the end of the transition, the rest of the parental single crystal also exhibited the same kind of deformation (Movie S1b). The remaining α-Si crystal was strongly elongated parallel to the same <110> direction as the β-Si areas on the onset of transition.
Another example is our recent study of zirconium (Zr) metal. Zr has previously been observed to exhibit unusual grain enlargement across the α → ω phase transition [26]. The parent phase is a nano-crystalline aggregate, while the product phase is much grainier. The relative change in grain size structure was inferred from the ‘spotty’ diffraction lines recorded with a monochromatic beam on the daughter ω-phase of Zr in comparison to the continuous diffraction lines from the parent α-phase of Zr. The grain enlargement in Zr is observed under high pressure and room temperature conditions, as opposed to typical grain enlargement processes that are required to occur at elevated temperatures to overcome the activation barriers for diffusion. Currently, both the driving force and the mechanism of this phenomenon remain unknown. Measurements with a polychromatic beam that is 500 × 500 nm2 size demonstrated that the newly formed ω-Zr crystals may have an irregular morphology (Figure 3b).
Using Laue diffraction, the grain enlargement process in Zr was studied in real time [27]. Initially, we did not observe any Laue reflections from the fine-grained parent α-phase. As Zr started to undergo a transition to ω-phase, we started to observe the appearance of strong diffraction spots. The intensities of these reflections increased gradually along with increasing pressure. Mapping of the ω-Zr reflections clearly demonstrated that the ω-Zr crystals nucleated and grew in the nano-crystalline matrix of α-Zr. In the Supplementary Materials, a movie combined from maps of an ω-Zr reflection is presented as an example (Movie S2). The sizes of the newly formed ω-Zr crystals gradually increased along with the increase in pressure, while the intensities of the ω-Zr reflections gradually decreased towards the edges of the crystals away from the nucleation points. These observations indicate a grain enlargement mechanism that involves formation and movement of highly angular grain boundaries, distinguishing the enlargement from a recovery process in which stored energy of dislocations is released without movement of the grain boundaries. In the case of recovery, intensities of ω-Zr reflections on the composite frames would increase simultaneously over a single grain area. This is followed by gradual sharpening of the ω-Zr reflections. The observed ω-Zr reflections stayed at the same level of broadening during the grain enlargement process indicating that there was no substantial texture development involved in this process. The majority of ω-Zr reflections exhibited only positive shifts of their intensities, indicating that ω-Zr crystals mainly grew at a cost to α-phase, and not at cost to each other, as would be the case if the enlargement process had a similar nature to the widely known grain coarsening process.

In the future, faster area detectors and translational stages will be implemented in order to improve the time resolution of this technique, while improvement of its spatial resolution will require smaller incident beams. Improvement of both spatial and time resolution will provide better details of the phase transition mechanisms and interface developments thereof. For example, implementation of X-ray polychromatic beams focused down below 100 nm [12] may provide details of the mechanism of the pressure induced grain enlargement observed across the α → ω phase transition in Zr.
A clear advantage of DAC compared to other stress generation devices is that the sample can be studied under hydrostatic compression or alternately under shear. Hydrostatic pressure using either He or Ne as a transmitting medium can be contrasted with studies with other media (such as silicone oil for example), thereby modifying the shear forces.

The following are available online at https://www.mdpi.com/2073-4352/9/12/672/s1, Figure S1: Axis Pro Micro Support micromanipulator available in sample preparation laboratory of HPCAT, Figure S2: maps of reflections (indices are shown) from a crystal of ω-Zr, Movies S1a and S1b: series of composite frames of reflections from coexisting α- and β-Si [1] at the onset of α → β transition (S1a) and when the transition was nearly over (S1b), arrows of different colors in S1a denote reflections from different crystals of α-Si, rectangle in S1a denotes overlap area with S1b, Movie S2: series of composite frames of a reflection from an ω-Zr crystal growing during the α → ω transition [27], time intervals since starting of data collection are shown in the movies. 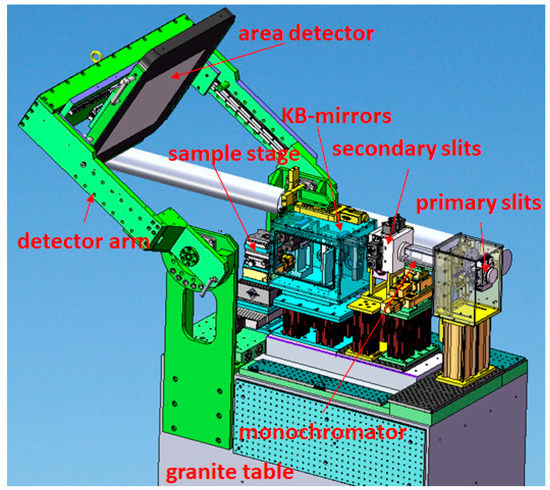 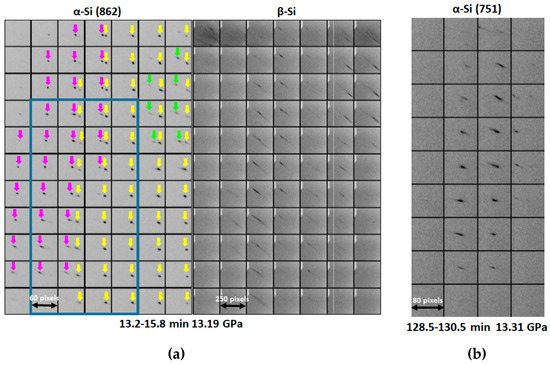 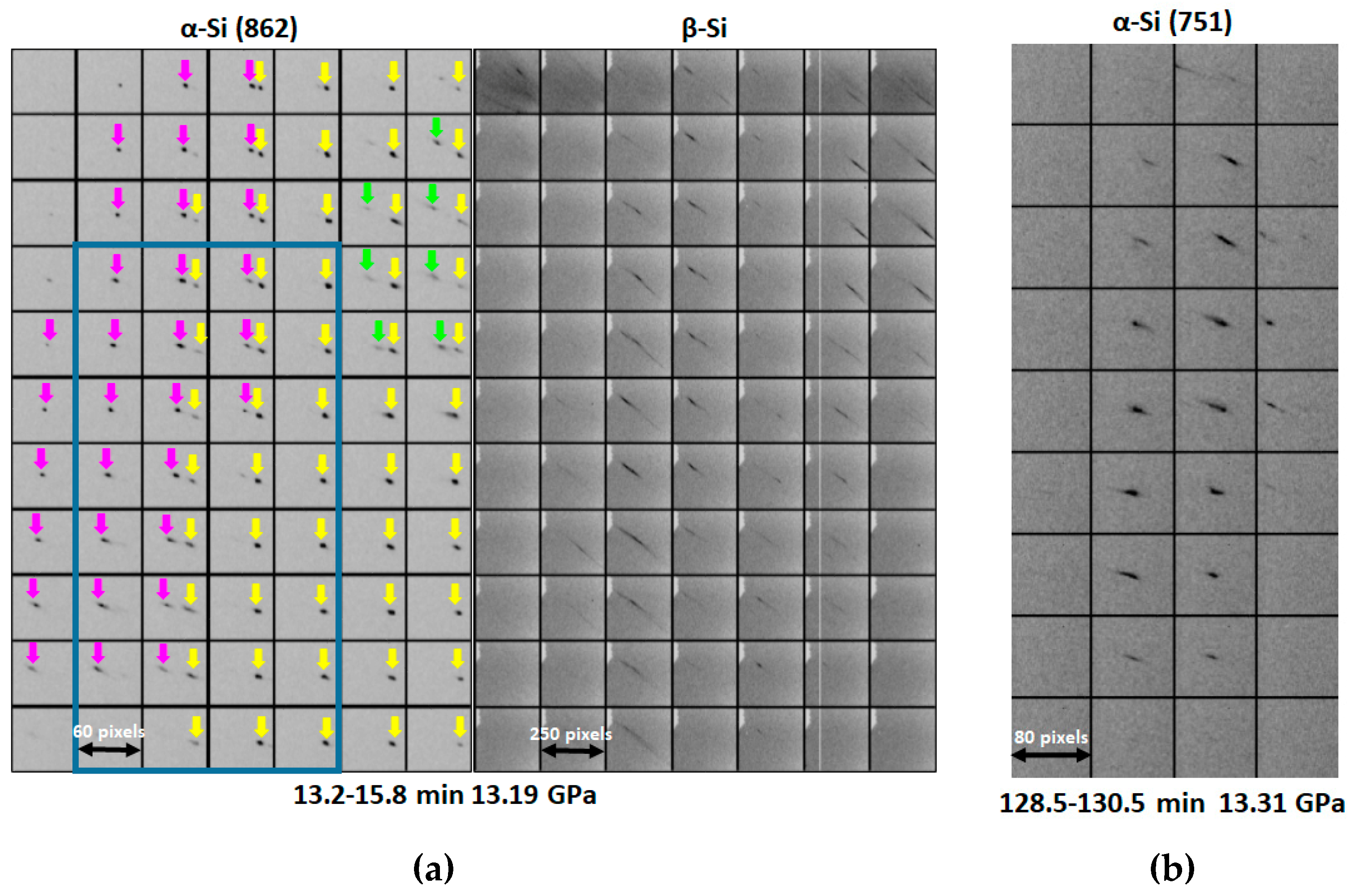