Electro-Optic (E-O) modulators have recently attracted growing attention in ultra-compact photonic integrated circuits (PICs) [1]. They have extensive applications in optical telecommunication networks and microwave-photonic systems [2]. The Mach-Zehnder interferometer (M-ZI) is one of the most important interference structures in modulators because of its simple design and manufacture, with the existence of a reference arm that compensates for the common-mode effect [3]. Many types of M-ZI-based applications for optical communication have been investigated, such as switches/modulators [4,5], multi/demultiplexers [6,7], and splitters [8,9].
Lithium niobate (LiNbO3, LN) is one of the most remarkable optical crystal materials due to its combination of excellent E-O and nonlinear optical characteristics [10]. Due to the high E-O coefficient (r33 = 31.2 pm/V) in LN, high-quality E-O modulators of this type are very valuable in optical communication [11,12,13,14,15]. In the last decade, high-refractive-index contrast in the form of lithium niobate thin film bonded to a SiO2 layer (lithium niobate on insulator, LNOI) has emerged as an ideal platform for integrated high-performance modulators [16,17,18,19]. A basic challenge in the production of M–ZI modulators in LNOI is the fabrication of high-quality waveguide structures. A few techniques have been developed for fabricating waveguides in LN, including dry-etching [20,21,22], proton exchange (PE) [23], and chemo-mechanical polishing [24]. Compared with other methods, PE is low-cost, has low propagation loss, and is a mature manufacturing method that is compatible with the LN optical waveguide industry [25,26]. Compared with rough-etched side walls, PE waveguides have smooth boundaries. However, to the best of the authors’ knowledge, to date there have been few reports on proton-exchanged electro-optic modulators in LNOI [23].
In this research, we simulated and analyzed a proton-exchanged E-O M-ZI modulator in an x-cut LNOI. Based on the full-vectorial finite-difference method [27], the single-mode conditions of the PE waveguides were investigated, the bending losses of the Y-branch structures were analyzed, and the propagation losses of the PE waveguides with different separation distances between electrodes were simulated. The half-wave voltages of the devices were calculated using the finite difference beam propagation method (FD-BPM) [28,29]. The optimized half-wave voltage-length product (Vπ·L) was approximately 10.2 V·cm.

The material of the device studied was an x-cut LN thin film bonded to a SiO2 layer deposited on an LN-substrate [17]. The thicknesses of the LN thin film and the SiO2 layer were 0.5 μm and 2 μm [30], respectively. The structures were cladded with 2-μm-thick SiO2 layers after the PE waveguides and electrodes were fabricated. Figure 1a shows a schematic of the M-ZI. The input wave was emitted into a directional coupler. The input power was divided equally into the two output waveguides with a first directional coupler. The two waveguides formed the two arms of the M-ZI. On both arms, opposite electric fields were applied to modify the refractive of the LN and thus change the phase of the wave propagating through that arm. The two waves were then combined into another 50/50 directional coupler. By varying the applied voltage, the amount of light emitted from the two output waveguides could be continuously controlled.
Figure 1b shows the schematic cross-sections of the M-ZI and the channel waveguide. The lateral diffusion could be neglected when the thickness of the PE was much lower than the mask width, and a rectangular step-like refractive index profile could be formed during the PE process, as shown in the inset of Figure 1b. The PE region formed stripe-loaded channel waveguides, and the LN thin film on both sides of the PE region formed planar waveguides. The PE only increased the extraordinary refractive index (ne) of the LN crystal and it therefore supported only one type of mode in the channel waveguides (the transverse electric (TE) mode in the x-cut LNOI). The ordinary and extraordinary refractive index changes were −0.05 and 0.08, respectively. Table 1 shows the refractive indices of the material at the wavelength of 1.55 μm. In previous studies on bulk LN, the PE waveguides generally suffered from a dramatically reduced E-O coefficient for the electro-optic devices [31]. Since the E-O coefficient of the unannealed proton exchange region was close to zero, it was set to zero in the simulation.
The full-vectorial finite difference method was regarded as a simple and effective method to solve the bending loss and the mode distribution. The finite difference algorithm was used to mesh the geometry of the waveguide. This algorithm had the ability to adapt to the arbitrary waveguide structure. After the structure was meshed, Maxwell’s equations were then transformed into matrix eigenvalue problems and solved by sparse matrix techniques to obtain the effective indices and the mode distribution of the waveguide modes [33]. The FD-BPM was employed to simulate the M-ZI. The method consisted of marching the input optical field over small distances in the dielectric media with the use of a fast Fourier transform. In each propagational step, the plane spectrum was used to simulate the optical field in the spectral domain, and due to the medium inhomogeneity, a phase correction was introduced in the spatial domain [34].

The full-vectorial finite-difference method was used to calculate the single-mode conditions, mode sizes, and optical power distribution of the PE channel waveguides. The widths of the PE waveguides were optimized to 1.2 µm. The propagation losses of the guided mode at different separation distances between the electrodes were analyzed and discussed. As a very important aspect of the practical application, the half-wave voltages were simulated using FD-BPM. The thickness of the PE waveguides and the separation distances between the electrodes were optimized to 0.15 µm and 8.08 µm, respectively. The optimized value of Vπ·L was calculated to be 10.2 V·cm.

B.X. conceived the original idea; H.H. carried out the simulations and wrote the manuscript; H.H., B.X., T.L., G.C. and S.R. contributed the useful and deep discussions, analyzed the data and modified the manuscript.

This work was supported by the Shenzhen Science and Technology Planning (NO. JCYJ20170818143327496), the Project of Youth Innovative Talents in Higher Education Institutions of Guangdong (NO. 2018KQNCX399), the Foundation of Zibo Vocational Institute (NO. 2018zzzr03), the School City Integration Development Plan of Zibo (NO. 2019ZBXC127), and the Shandong University Science and Technology Planning (NO. J16LN93). 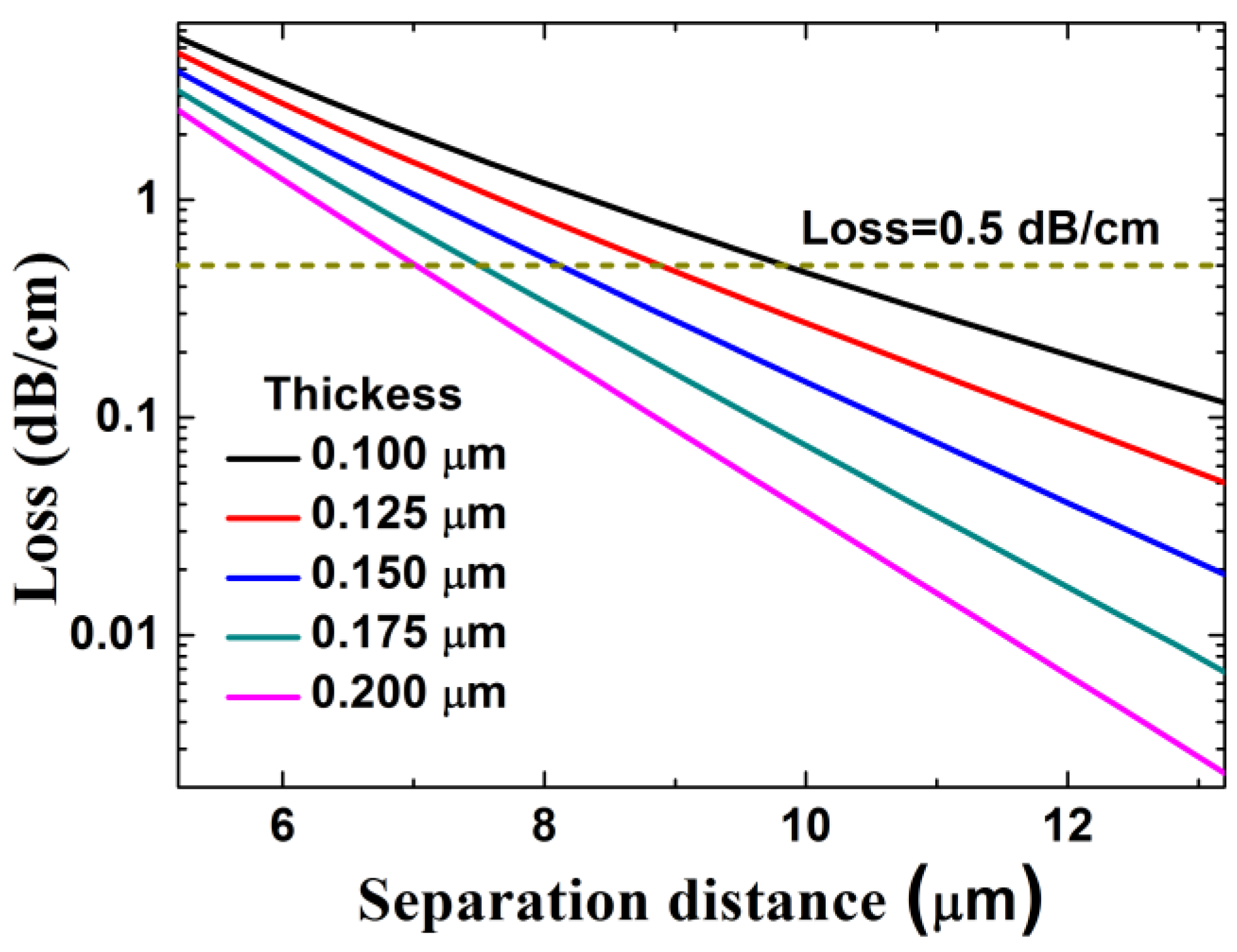 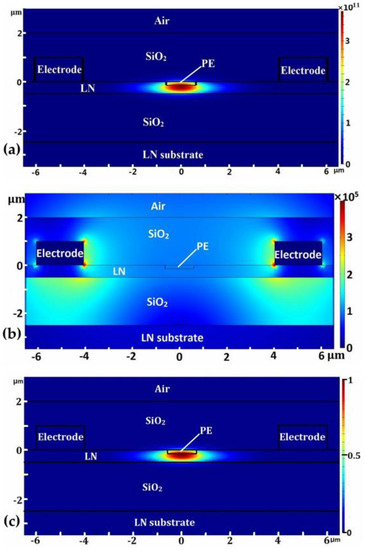