Hydrothermal Synthesis of (001) Facet Highly Exposed ZnO Plates: A New Insight into the Effect of Citrate
Next Article in Special Issue

Comparative Evaluation of the Photostability of Carbamazepine Polymorphs and Cocrystals

Carbamazepine (CBZ), a widely used antiepileptic, is known to be sensitive to light. The aim of this study was to evaluate the photostabilities of three cocrystals of CBZ (CBZ–succinic acid (SUC), CBZ–saccharin (SAC) form I, and CBZ–SAC form II) illuminated with a D65 fluorescent lamp compared with those of the conventional solid forms: CBZ polymorphs (forms I, II, and III). The order of discoloration determined using a colorimetric measurement was almost consistent with that of the degradation rates estimated using Fourier-transform infrared reflection–absorption spectroscopy, and these parameters of CBZ polymorphs increased in the order of form III, form I, and form II. CBZ–SUC and CBZ–SAC form I significantly suppressed the discoloration and degradation of CBZ compared with the raw CBZ, while CBZ–SAC form II facilitated the discoloration and degradation of CBZ. These results were supported by the results from the low-frequency Raman spectroscopy. The molecular mobility estimated using solid-state nuclear magnetic resonance 1H spin–lattice relaxation time strongly correlated with the degradation rate constant, indicating that molecular mobility significantly decreased following the formation of CBZ–SUC and CBZ–SAC form I and resulted in higher photostability. Overall, CBZ–SUC and CBZ–SAC form I are photostable forms and cocrystallization was proven to be an effective approach to improving the photostability of a photolabile drug. View Full-Text
Keywords: carbamazepine; photostability; polymorphs; cocrystal; succinic acid; saccharin carbamazepine; photostability; polymorphs; cocrystal; succinic acid; saccharin
►▼ Show Figures 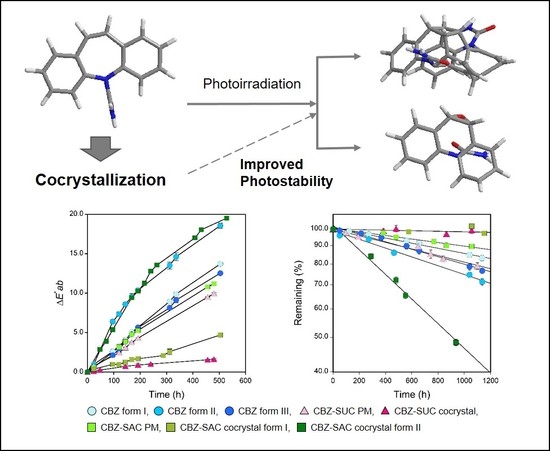