Spin State Behavior of A Spin-Crossover Iron(II) Complex with N,N′-Disubstituted 2,6-bis(pyrazol-3-yl)pyridine: A Combined Study by X-ray Diffraction and NMR Spectroscopy
Next Article in Special Issue

:
We have used differential scanning calorimetry (DSC) to investigate the phase transition of a liquid crystal, N-(4-methoxybenzylidene)-4-butylaniline (MBBA), confined within porous silica materials with one- and three-dimensional pore architectures. Each phase-transition temperature of the confined MBBA linearly decreased with the inverse pore size compared with that of bulk MBBA. However, the degree of temperature shift varied owing to differences in the pore architectures. In addition, when MBBA was confined within one-dimensional pores, the thermal anomaly associated with the phase transition from the nematic phase to the isotropic liquid phase was not observed in the DSC measurements.
Keywords:
liquid crystals; MBBA; silica pore; DSC; phase transition

Liquid crystals have attracted great interest in recent years owing to their applications, such as in optical displays. Liquid crystals possess both the fluidity of a liquid-like state and the order of a crystalline state. The ordering of the molecular reorientation in a liquid crystal enables us to study its formation process using statistical mechanics. Scaling with size, which is commonly used in statistical mechanics, has been discussed in experimental studies of samples that are confined within nanometer-sized porous materials [1,2,3]. Controlled-pore glasses (CPGs), which are often used as porous materials, exhibit 1-D cylindrical pore geometries comprising pores with silica walls. When a liquid crystal is confined within CPG pores, the size in the radial direction is limited by the size of the pore radius. In contrast, the size in the axial direction is hardly limited at all. In the case of confinement in such a cylindrical pore, it has been reported that molecules in the liquid-crystal state are aligned in the axial direction, i.e., parallel to the pore walls. However, the pores of CPGs and other porous silica-gel materials are connected to each other in the perpendicular direction, like a jungle gym (see Figure 1) [1,4]. This three-dimensionally-networked structure yields many connection points, wherein frustration of the molecular orientation in the liquid crystal disturbs the alignment of molecular orientations. However, the detailed effects of the connections among the 3-D-networked pores has not been thoroughly investigated. Mesoporous silica—for example FSM-16 or SBA-15—has uniform-sized mesopores, which are synthesized using surfactants as templates. The pore geometry is 1-D cylindrical with a 2-D hexagonal stacking (see Figure 1) [5]. In these cases, the pores do not connect with each other, in contrast to CPG, although some holes exist in the pore walls of SBA-15. Thus, a liquid crystal confined within mesoporous silica is considered an ideal model system for discussing the statistical mechanics of a system confined within a 1-D cylindrical space. However, the pore size of mesoporous silica is quite small compared with that of CPG or other silica-gel materials with 3-D-networked pore architectures.
In this study, differential scanning calorimetry (DSC) measurements of liquid crystals confined within mesoporous silica MSU-H and FSM series with 1-D cylindrical pores and confined with silica-gel CARiACT Q series with 3-D-networked pores, were performed. We discuss the phase transitions and dynamics of liquid crystal molecules confined in the mesoscopic regions with different type of pore architecture. A liquid crystal material confined within porous materials is N-(4-methoxybenzylidene)-4-butylaniline (MBBA), which is a well-known thermotropic liquid crystal that forms a nematic phase at room temperature. Figure 2 shows the molecular structure of MBBA. The transition of bulk MBBA from the metastable crystalline (C′) phase to the nematic (N) phase (TC′N) occurs at 294 K, from the stable crystalline phase (C) to the nematic phase (TCN) at 295.3 K, and from the nematic phase to the isotropic liquid (I) phase (TNI) at 317 K [6]. In addition, MBBA forms multiple metastable crystalline phases and the glass transition of the supercooled nematic phase is observed at Tg = 205 K. The appearance of the metastable crystalline phase depends on the thermal history of the cooling process, as investigated by NMR, DSC, X-ray, Raman, and dielectric experiments [7,8,9,10,11]. Mansare et al. [12] used controlled-pore glasses with different pore sizes to investigate the effects of confined space on phase transitions of liquid crystals.

MBBA was purchased from Tokyo Chemical Industry Co. Ltd. (Tokyo, Japan) and used without further purification. Porous materials CARiACT Q and FSM series were provided by Fuji Silysia Chemical Ltd. (Kasugai Aichi, Japan), and MSU-H was purchased from Sigma-Aldrich Japan Inc. (Tokyo, Japan). The CARiACT Q series has a 3-D-networked pore architecture and comprises five types of samples of Q50, Q30, Q15, Q10, and Q6 with different pore sizes. The FSM series has a 2-D hexagonal-stacked 1-D cylindrical pore architecture and comprises three types of samples FSM16, FSM12, and FSM8, which are classified by the carbon number of the surfactants used as pore templates. MSU-H is characterized as mesoporous silica with 1-D cylindrical pores having relatively large pore diameters compared to the FSM series [13]. The values of the pore diameters of all pore materials were determined through N2 adsorption measurements with the BJH method, and they are summarized in Table 1.
All porous materials were dried under vacuum at 200 °C and an approximately 80% amount of MBBA for the pore volume was added to the dried pore materials and were mixed through stirring for 30 min, respectively.
DSC measurements were performed with SEIKO Instruments DSC 120 and Perkin Elmer DSC 8500 from 140 K to 333 K along to heating direction with a heating rate of 3 K min−1 after the premeasuring treatment of cooling with the average rate of 10 K min−1. Sealed aluminum pans were used in all experiments. An empty aluminum pan was used as the reference.

The phase-transition temperatures of MBBA confined within silica porous materials with 1-D (MSU-H, FSM series) and 3-D (CARiACT Q series) pore architectures declines with the inverse of the pore size, compared to that of bulk MBBA. Each phase transition temperature shifts to a lower temperature when MBBA is confined within 1-D and 3-D pores. However, TCN of MBBA confined within 3D pores drastically decreased compared with that confined within 1-D pores. In addition, for the sample confined within the FSM series, the thermal anomaly associated with the N-I phase transition was not observed in the DSC chart. Experimental results and theoretical analyses of the N-I phase-transition peak becoming broader and smaller under confinement have been previously reported. However, the phenomenon appears more strongly in samples confined within 1-D pores. This indicates that 1-D cylindrical mesoporous silica pores provide ideal conditions for confinement within a 1-D cylindrical space and that there is a critical size of the 1-D cylindrical space for the N-I phase transition. In contrast, 3-D pores contain connection points where frustration of the molecular alignment disturbs the kinetic and static aspects of crystallization and accelerates the vitrification of confined materials.
Further structural analysis using NMR and X-ray diffraction is necessary to investigate the changes in the molecular mobility and intermolecular interactions of liquid crystal molecules in the bulk state and under nanoscale confinement. Although we observed changes in the phase transition temperature and transition entropy of MBBA due to the confinement in mesoporous silica, elucidating phase formation mechanism of liquid crystals will be addressed in a follow-up study.

We would like to thank Fuji Silysia Chemical Co. Ltd. for providing silica (CARiACTs and FSMs). 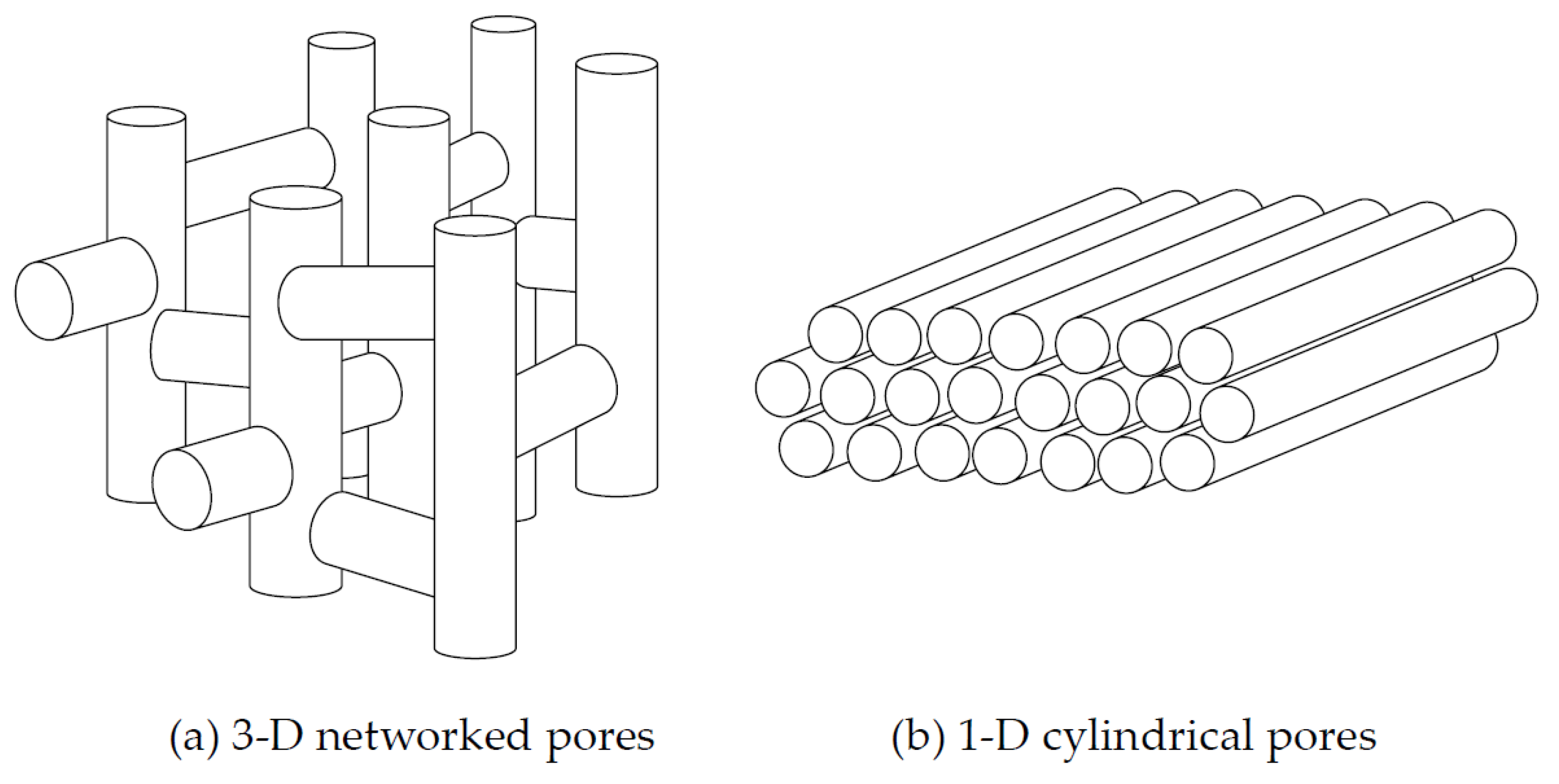 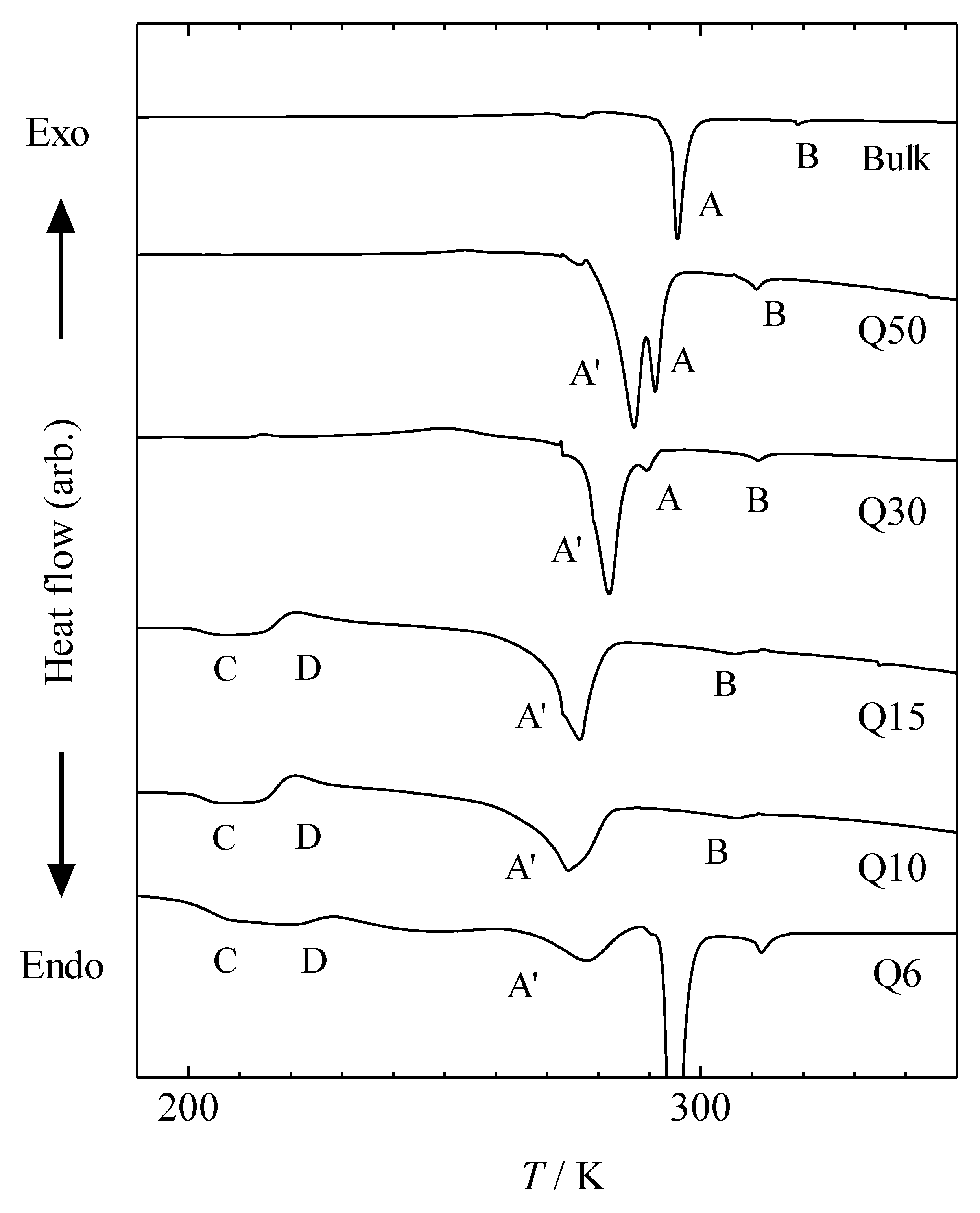 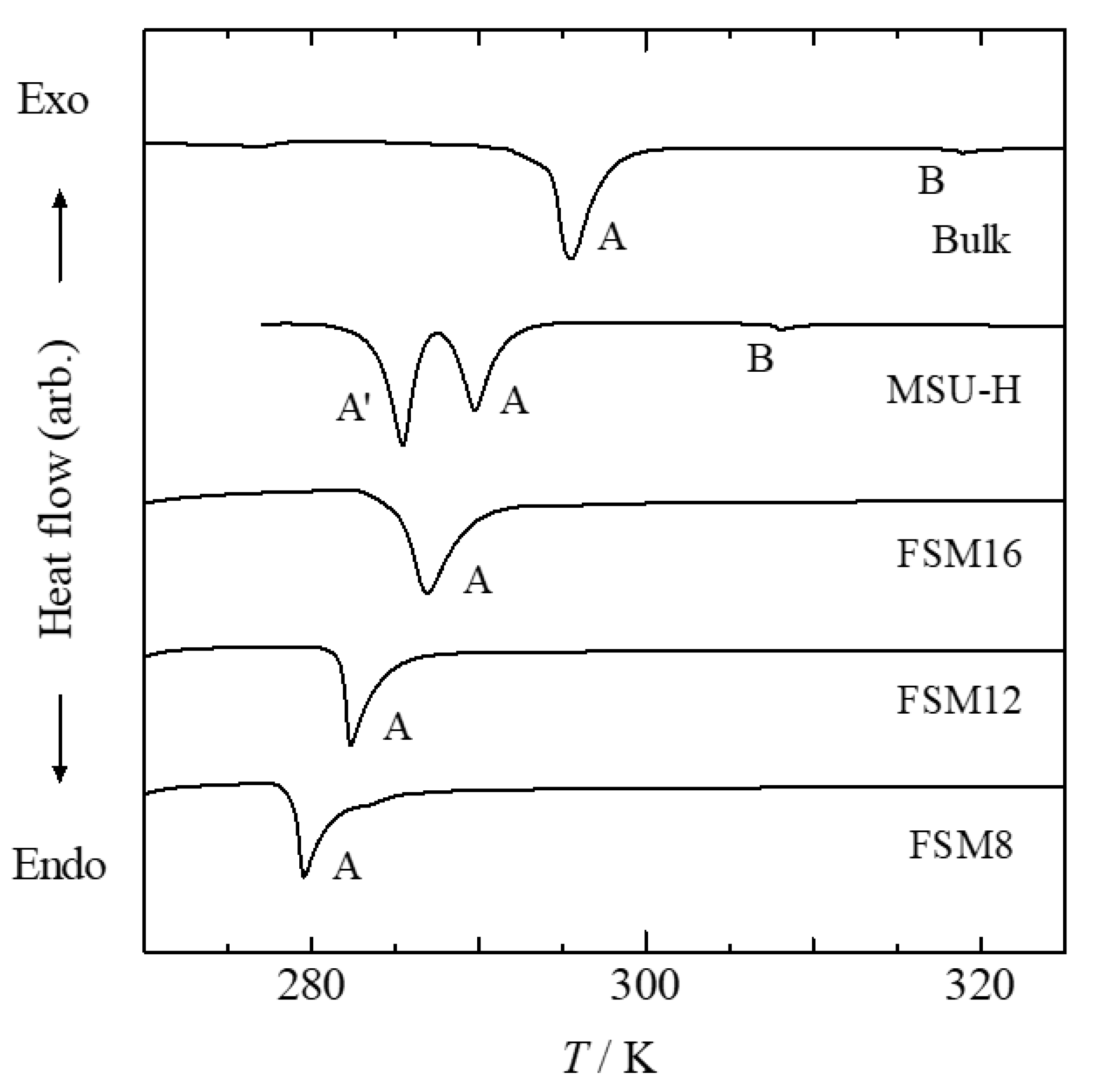 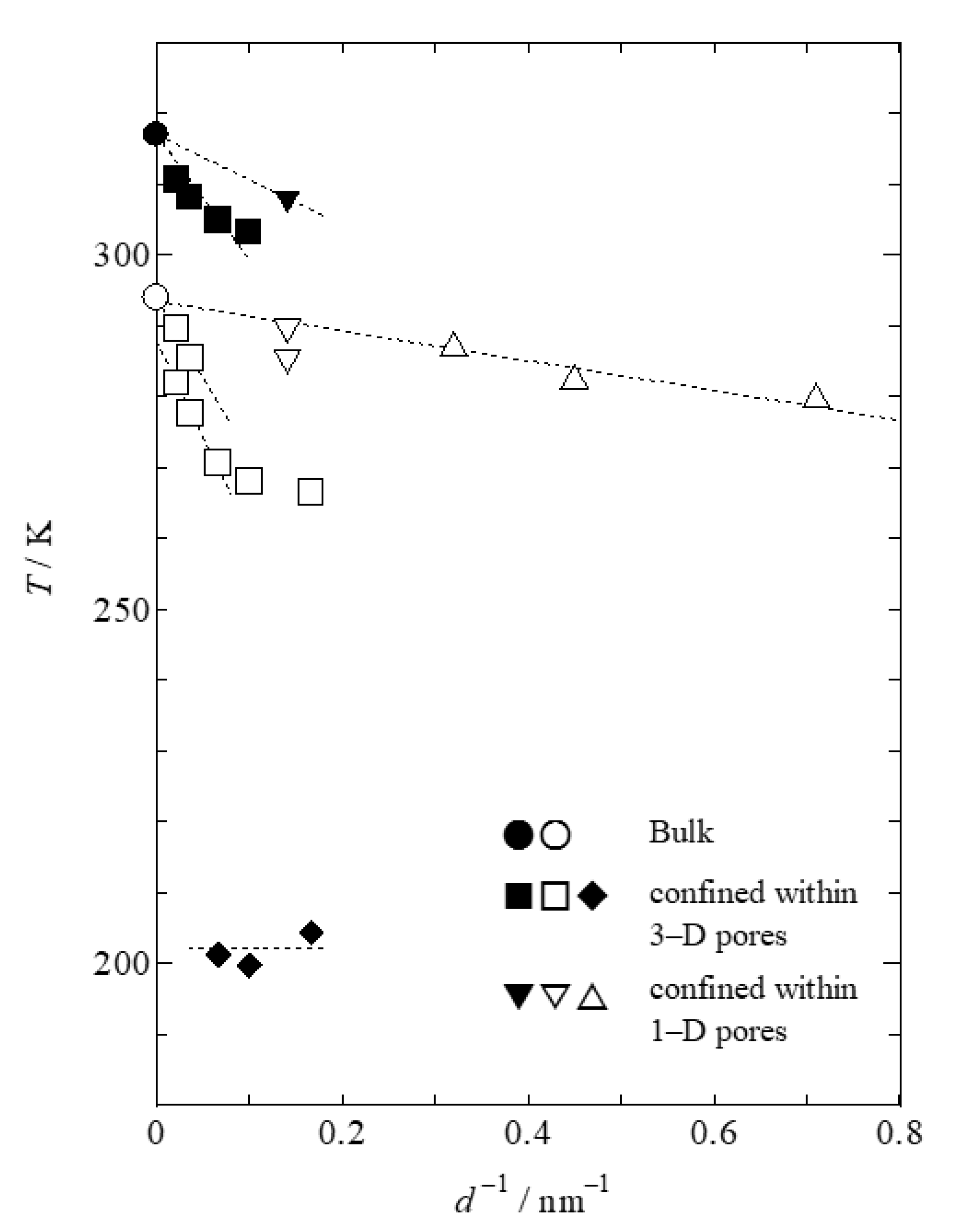 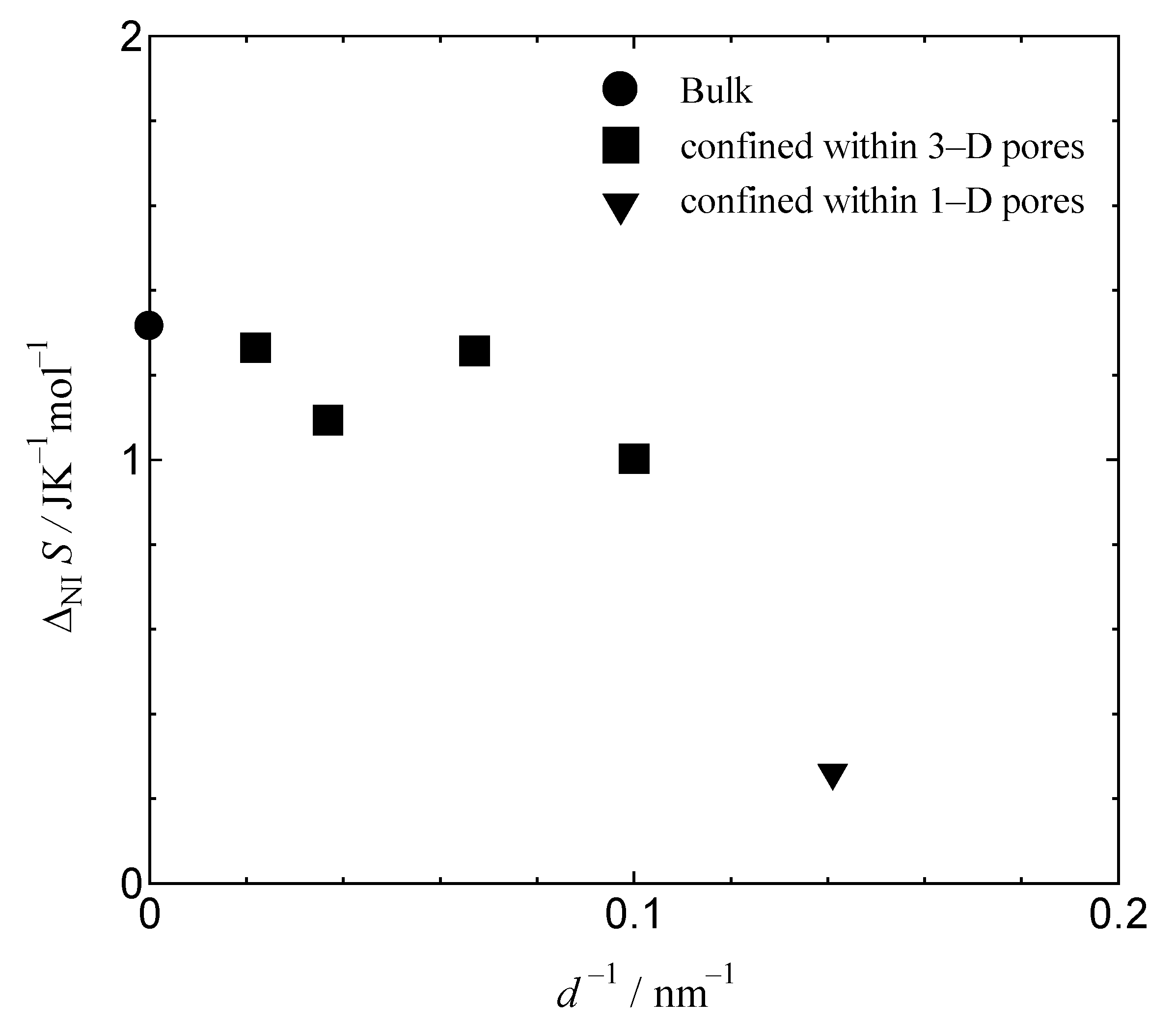