Incorporation of Cd-Doping in SnO2
Previous Article in Journal

:
Diodes with an erbium and nitrogen codoped magnesium zinc oxide (MgZnO:Er,N) active layer were fabricated by spray pyrolysis on Si substrate with aqueous solutions including magnesium nitrate, zinc acetate, erbium acetate, ammonium acetate, and indium nitrate precursors. Diodes with different nitrogen content in their precursor were prepared and their properties were investigated. With scanning electron microscopy, film surface with mixed hexagonal flakes and tiny blocks was characterized for all samples. Certain morphologies varied for samples with different N contents. In the photoluminescence analyses, the intensity of the oxygen-related defects peak increased with the increasing of nitrogen content. The diodes were fabricated with an Au and In deposition on the top and backside. The diode current–voltage as well as capacitance–voltage characteristics were examined. An ununiformed n-type concentration distribution with high concentration near the interface in the MgZnO:Er,N layer was characterized for all samples. Diodes with high nitrogen content exhibit reduced breakdown voltage and higher interface concentration characteristics. Under reversed bias conditions with an injection current of 50 mA, a light spectrum with two distinct green emissions around wavelengths 532 and 553 nm was observed. A small spectrum variation was characterized for diodes prepared from different nitrogen content. The diode luminescence characteristics were examined and the diode prepared from N/Zn=1 in the precursor showed an optimal injection current-to-luminescence property. The current and luminescence properties of the diode were characterized and discussed.
Keywords:
magnesium zinc oxide; erbium; nitrogen doping

Zinc oxide (ZnO), a group II–VI material, has been widely investigated in the past decades. Many zinc oxide based devices, such as sensors [1,2], electronic [3,4], optoelectronic [5,6], and mechanic electronic [7,8] have been studied and applied. One of the optoelectronic diodes, the n-type erbium (Er) doped ZnO on a p-type Si substrate, demonstrates green light luminescence ability [9]. As the emission wavelength is just under the low transmission loss window of the PMMA (Poly(methyl methacrylate) core optical fiber [10], the Er doped ZnO diode shows the developing potential for Si-based photonic devices.
In the Er doped diode, the energy transformation of carriers from impact ionization to Er ions was the origin of diode luminescence. The avalanched breakdown operation conditions for achieving carrier impact ionization herein becomes important. On the other hand, the Er shows an n-type dopant in ZnO with the substation of the Zn site. Thus for the active layer with Er doping, the n-type concentration increases with the increasing of the Er doping. As the Er doped region in the pn diode dominates the diode breakdown conditions, controlled carrier concentrations in the Er doped diode under sufficient Er doping becomes important. In regarding the dopings with the Er-containing materials, much work was performed on their energy transfer mechanism [11,12,13,14,15], but there was less discussion regarding the carrier concentration. Zhong [16] prepared Er doped and Er,N codoped ZnO by implantation and found the luminescence difference by forming Er-O-N complexes. In our previous studies, diode performance improved with Mg incorporated in the pn diode structure [17]. In this diode, the Er-related luminescence was operated under reverse bias with the impact ionization occurring in the depletion region. As the Er (III) doping in ZnO and MgZnO (II–VI) shows an n-type contributor, sufficient Er doping could imply that the depletion width decreased with the increase of n-type concentration. On the other hand, the N shows p-type doping in ZnO [18] and MgZnO [19]. The N doping in the Er content pn diode may compensate for the electron concentration and for the extending of the depletion width of the diode. In this work, the effect of nitrogen doping on the diode was studied. The Er and N codoped MgZnO diode was prepared with different N contents, and we compared the luminescence and diode properties.

The MgZnO:Er,N active layer followed by a ZnO:In layer were deposited on p-type Si substrate (concentration 5 × 1018cm−3) at 450 °C using a spray pyrolysis deposition system with zinc acetate dehydrate (Zn(CH3COO)2·2H2O,0.2M), magnesium acetate tetrahydrate (Mg(CH3COO)2·4H2O)(Mg/Zn=25%), erbium acetate hydrate (Er(CH3COO)3·4H2O)(Er/Zn=5%), and ammonium acetate (CH3COONH3) aqueous solution precursors. Before deposition, the Si wafer was cleaned with acetone, rinsed in DI water, dried by N2 gas, dipped in diluted HF, rinsed in DI water, and dried by N2 gas sequentially. The Si substrate was transferred to the deposition chamber and an approximately 350 nm MgZnO:Er,N layer followed by an approximately 140 nm ZnO:In layer were deposited sequentially. The circular Au electrode with a diameter of 0.8 mm was defined on the ZnO:In side with a metal mask by sputtering. The In contact was formed over the Si backside using a thermal process. Samples with different N/Zn atomic ratios of 0,1,4, and 8 in precursor were prepared and the sample codes were ME, ME1, ME4, and ME8, respectively.
The surface morphology of the samples was examined by scanning electron microscopy (SEM, Hitachi S-4300N, Tokyo, Japan). The elements of the film were analyzed by an energy dispersive X-ray spectrometer (EDS, JEOL JSM-6700F, Tokyo, Japan). The crystalline structure was obtained using X-ray diffraction (XRD, Bruker D8, Billerica, MA, USA). The photoluminescence (PL) spectrum was obtained by an optical system with a spectrometer (HR2000+, Ocean Optics, Largo, FL, USA), He-Cd laser (325 nm wavelength), and a cryostat. The diode current–voltage (I–V), electroluminescence (EL) and capacitance–voltage (C–V) characteristics were examined by a source meter (Keithley 2400, Solon, OH, USA), a spectrometer, and an impedance analyzer (Agilent 4294A, Lexington, MA, USA), respectively.

The p-type Si/n-type MgZnO:Er,N/n-type ZnO:In diodes with different N content were prepared by spray pyrolysis. The film surface morphology remained and the O-related defects increased with the increase of N content. The n-type concentration in MgZnO:Er,N layer compensated in the region far away from the Si interface and accumulated in the region near the Si interface with the increase of N content. With high N content, concentration accumulation around the interface, which may originate from donor-type defects, was enhanced and dominated the diode performance with a raised leakage current. The diode luminescence spectrum was examined. Improved luminescence was characterized for the diode prepared with a suitable N/Zn ratio. 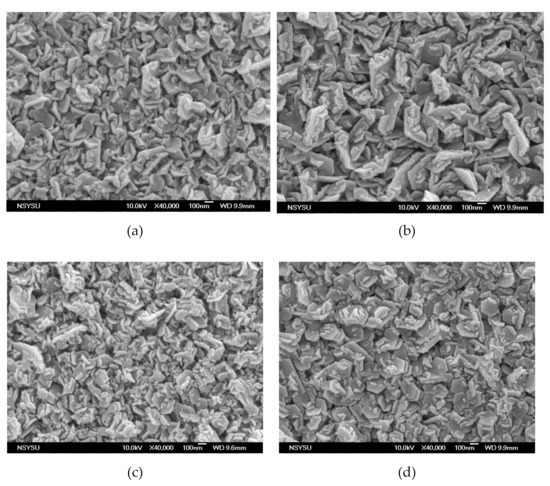 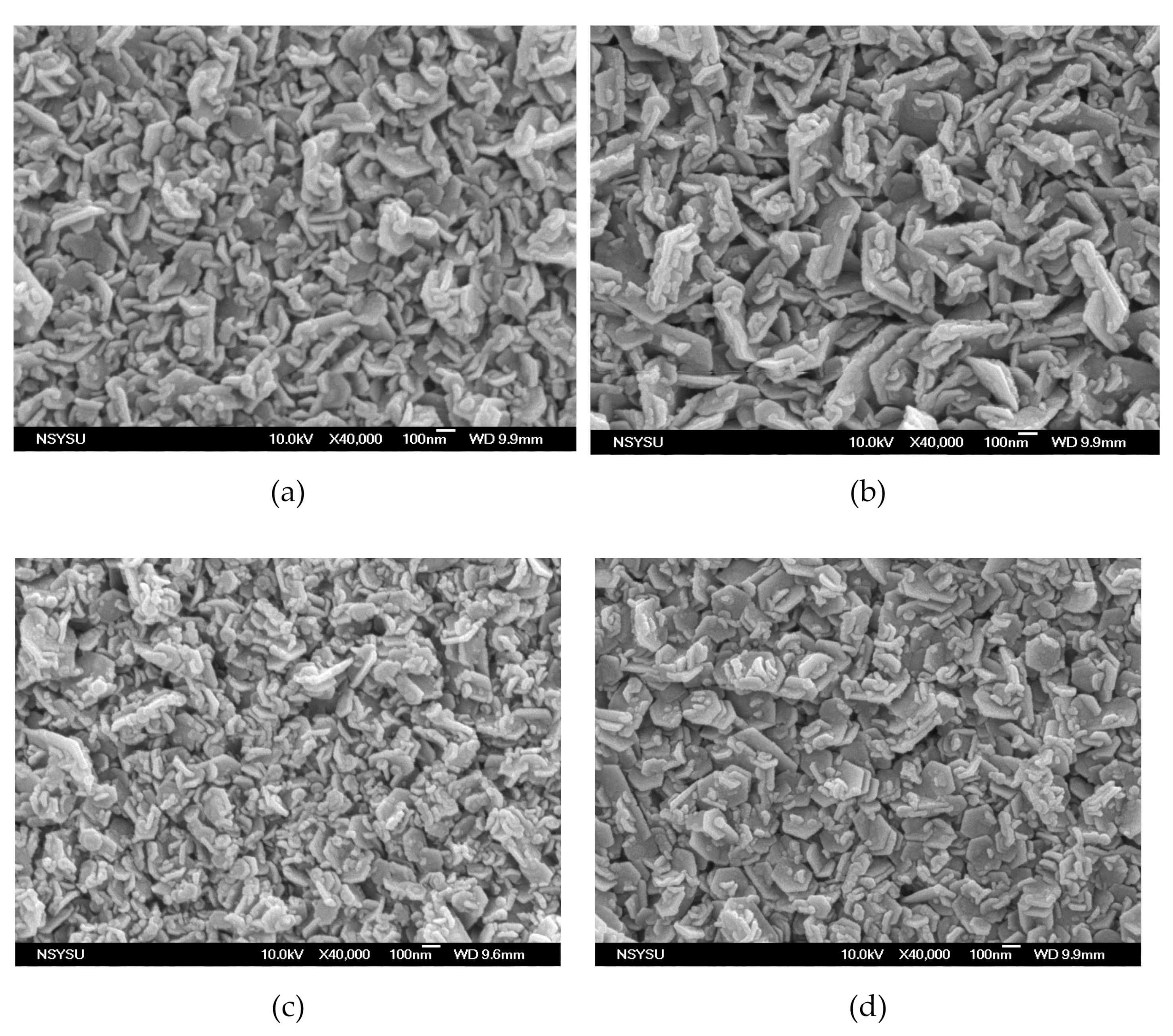 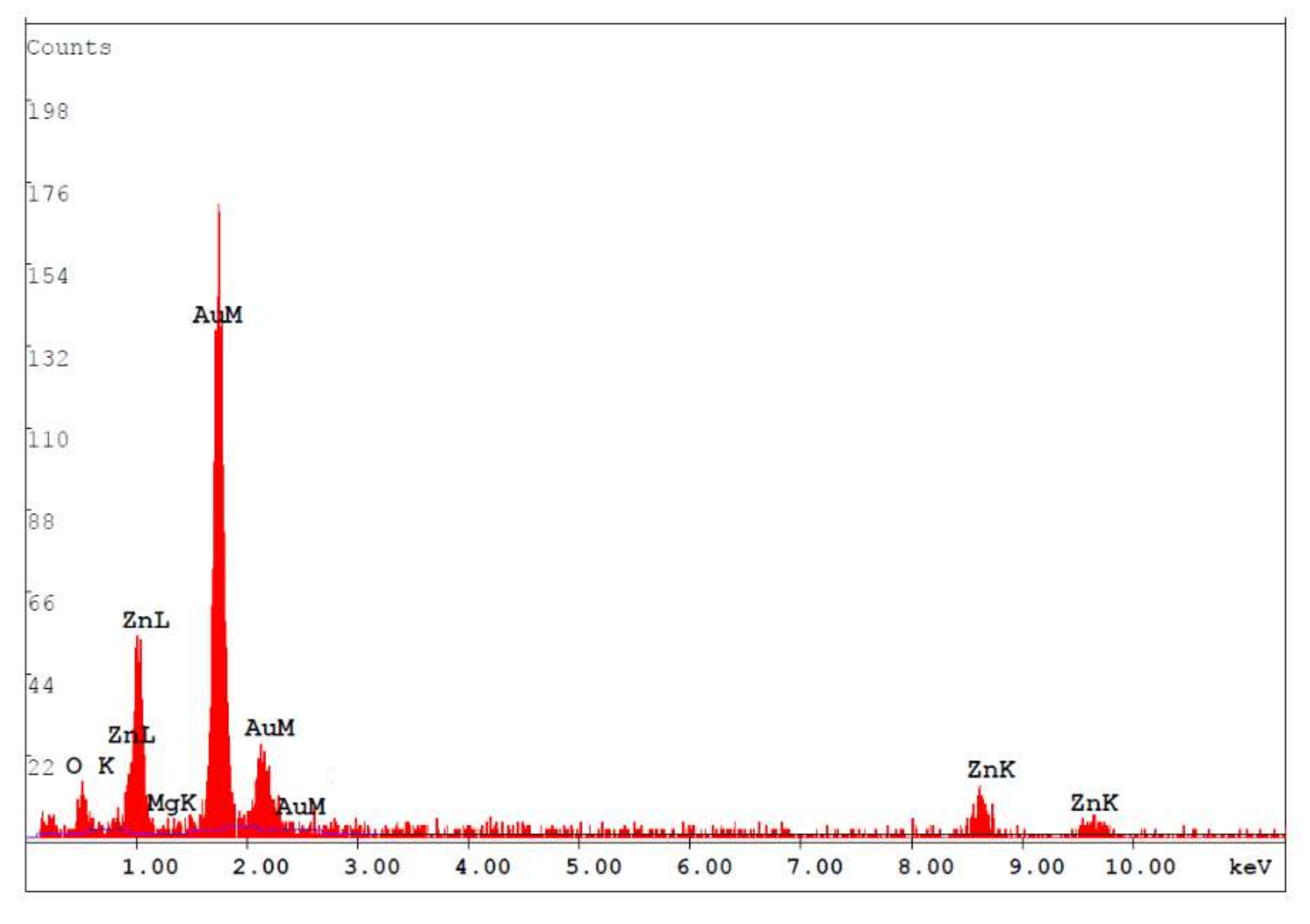 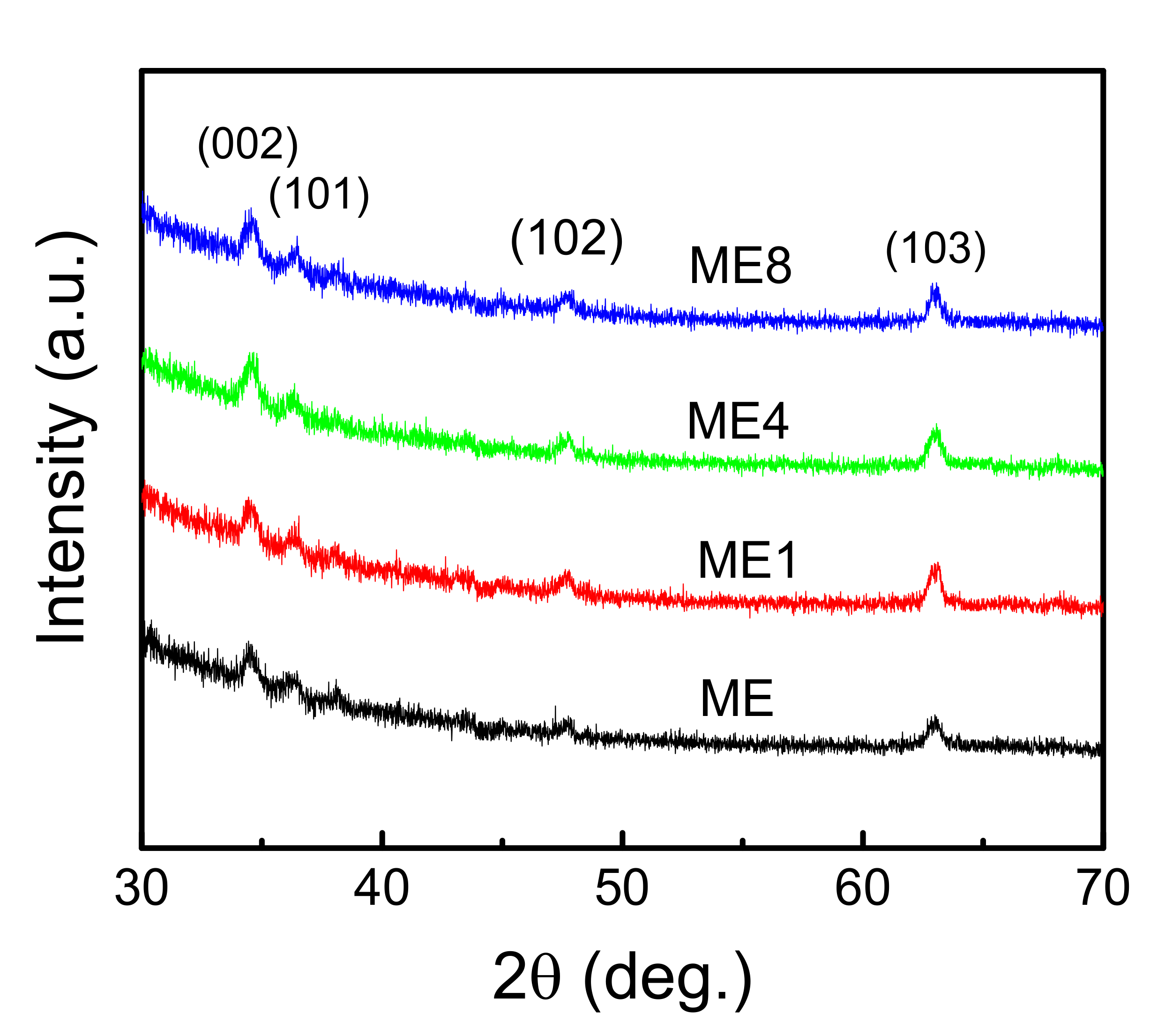 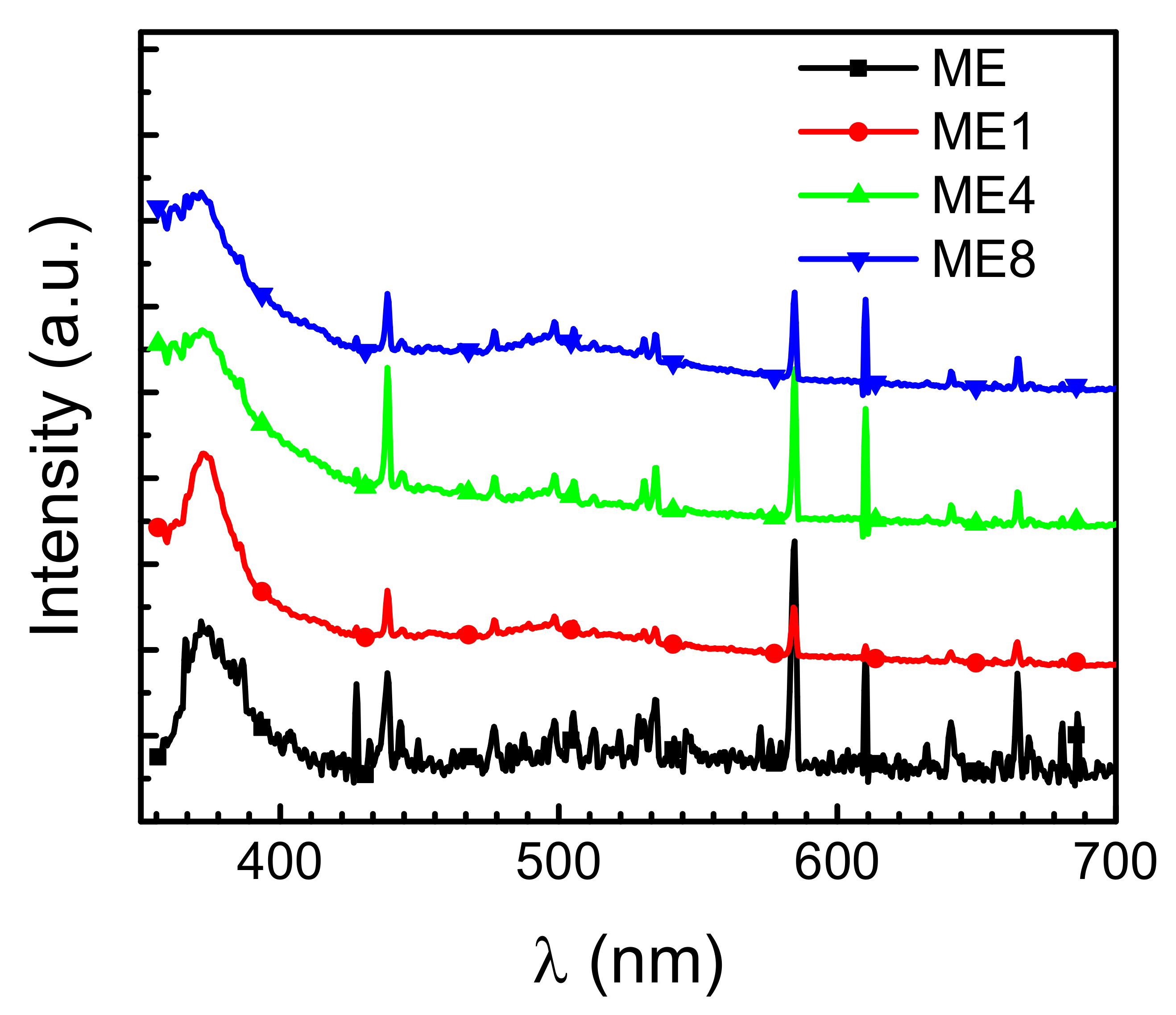 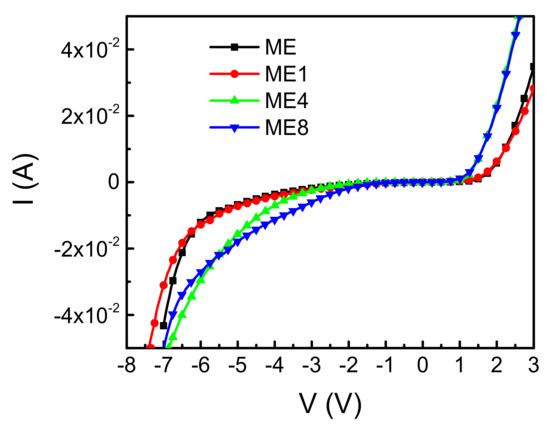 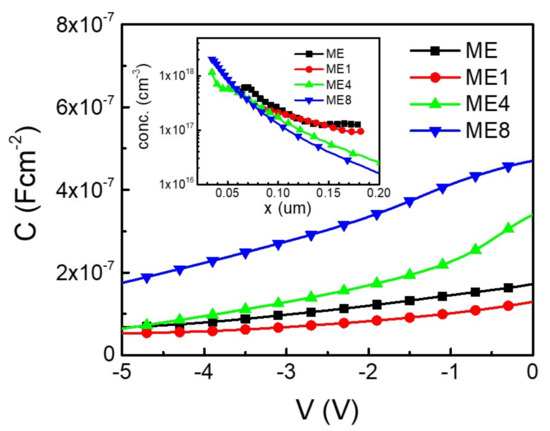 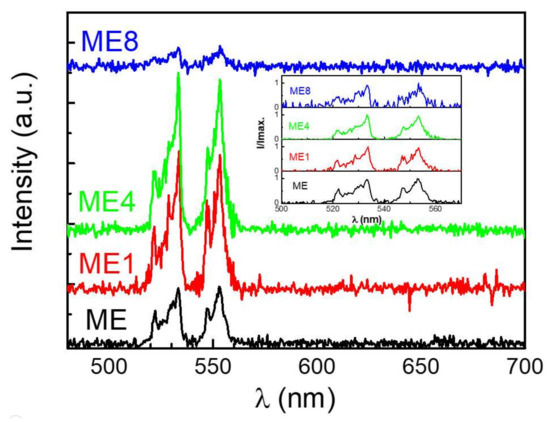 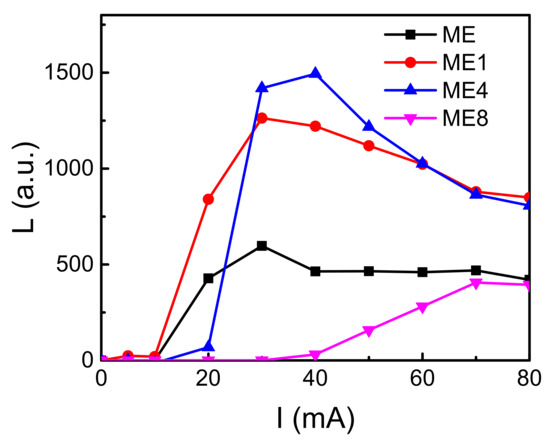 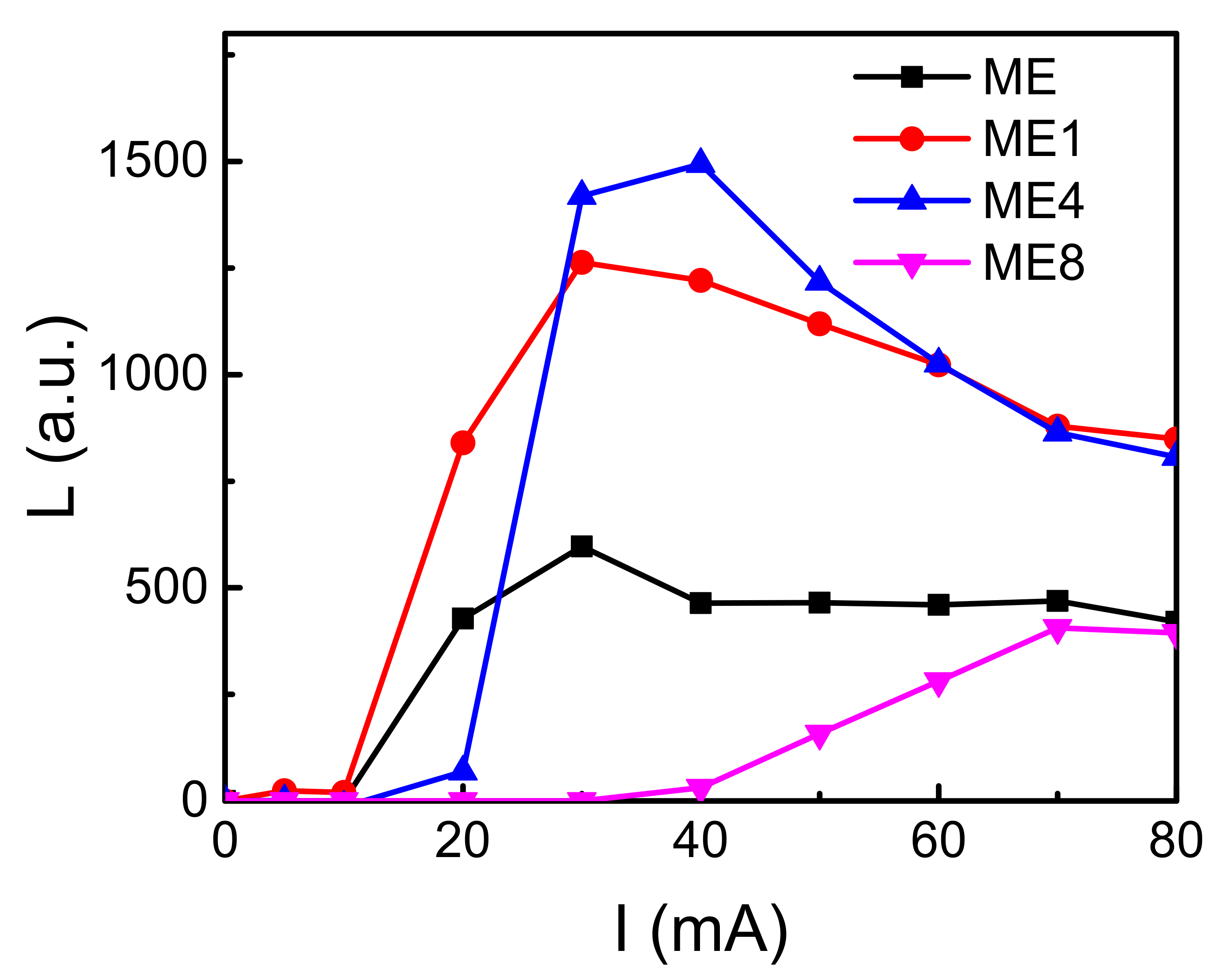