:
To realize stable operation of a microchemical system, it is necessary to develop a process monitoring method that can detect and diagnose blocked microreactors. In this study, a system composed of five monolithic microreactors and a split-and-recombine-type flow distributor (SRFD) was developed for Suzuki–Miyaura coupling. Firstly, the effects of operating conditions on the yield was examined by using a single microreactor. After that, an optimal design problem was formulated to maximize the blockage detection performance by adjusting the channel resistances of the SRFD and the sensor locations in the SRFD under the design constraints. To efficiently solve the problem, a pressure drop compartment model, which is analogous to electrical resistance networks, was used. The optimally designed system was experimentally evaluated from the viewpoint of the capability of continuous operation and the blockage detection and diagnosis performance. The evaluation results show that continuous operation was successfully carried out for one hour, and that the artificially generated blockage of each microreactor was accurately identified. The developed system minimized the process performance degradation due to blockage.
Keywords:
monolithic microreactor; numbering-up; process monitoring; blockage; flow distributor design; Suzuki–Miyaura coupling

Continuous flow microreactor technology has attracted great attention from chemical, pharmaceutical, and agrochemical industries. Microreactors (MRs) have many advantages, such as rapid mixing, high heat transfer, and accurate control of short residence times. These advantages offer greater control of the reaction conditions, which leads to improved product selectivity and yield when compared to batch methods. However, since the throughput of each MR is low, the numbering-up approach, which means the parallelization of MRs, is often adopted to increase the production amount [1].
In a numbering-up system, the uniform flow distribution is the most important issue. Use of multiple sensors and actuators makes it possible to control the flow rate to each MR, but leads to a complicated system which would cause various problems during operation. Therefore, it has been desirable to develop a system or device that spontaneously controls the distributed flow to ensure uniformity of the flow rate of MRs. Several kinds of flow distributors (FDs) have been developed, so far, for uniform distribution throughout the numbering-up system. Among the developed FDs, split-and-recombine-type FDs (SRFDs) were used for the detection and diagnosis of a blocked MR using a small number of sensors [2], but their usefulness has not been assessed in reaction processes.
Cross-coupling reactions serve as a powerful method for carbon–carbon bond formation in the synthesis of a variety of functional materials and biologically active compounds [3]. The Suzuki–Miyaura cross-coupling reaction can be regarded as one of these important bond-formation processes. Valsartan is one of the synthetic angiotensin II inhibitors, and holds the largest market share (for example, Diovan, Novartis, recorded sales worth US $4.2 billion in 2006) [4,5,6]. Goosen et al. have reported a synthetic process for the preparation of a key intermediate 3 (Figure 1) of valsartan via decarboxylation with a copper/phenanthroline [7]. Littke et al. have also reported a synthetic process for the preparation of 3 via homogeneous Pd-catalyzed Suzuki–Miyaura coupling [8]. However, a more efficient, versatile, and practical method for the synthesis of key intermediate 3 of valsartan has been required. Nagaki et al. have reported that Suzuki–Miyaura coupling of 2 prepared from o-cyanobromobenzene (1) and p-iodobenzaldehyde using monolithic MRs, where palladium on monolith is used as a catalyst, and serves as a more practical way to synthesize valsartan via compound 4, as shown in Figure 1 [9].
In this study, a numbering-up system consisting of five monolithic MRs connected to an SRFD with function of blockage detection was developed, and the practicality of the system was demonstrated using a Suzuki–Miyaura coupling reaction. To design the numbering-up system, the channel resistances and sensor locations in the SRFD were optimized to achieve high performance of the blockage detection. After constructing the experimental system based on the design result, its continuous operation was carried out for an hour. In addition, the usefulness of the previously proposed blockage detection and diagnosis method [2] was evaluated for an artificially generated blockage.

2. Design of the Numbering-Up System

A numbering-up system was designed as follows: First, the relationship between the operating conditions and the yield of a given monolithic MR was investigated by experiment. Next, the required number of the MRs was determined on the basis of the experimental result and the specified production amount. Then, a numbering-up system including MRs, an SRFD, and two sensors was efficiently designed using the pressure drop compartment (PDC) model, which is analogous to an electrical resistance network.

2.1. Study of the Reaction Conditions

Figure 1 shows a synthesis route of valsartan. In this study, although we focus on the coupling reaction, namely, the reaction from 2 to 3, we will first explain how to synthesize the organoboron component (2) from o-cyanobromobenzene (1). Component 2 was generated in an MR system composed of two stainless steel T-shaped mixers (M1 (inner diameter = 500 μm) and M2 (inner diameter = 500 μm) manufactured by Sanko Seiki Co., Inc.) and two stainless steel tube reactors (R1 (inner diameter = 1000 μm, length = 12.5 cm) and R2 (inner diameter = 1000 μm, length = 50 cm) at 0 °C, as shown in Figure 2. The mixers and tube reactors were connected with stainless steel fittings (GL Sciences, 1/16 OUW). A solution of o-cyanobromobenzene (0.10 M in THF, flow rate: 6.0 mL/min) and a solution of n-BuLi (0.40 M in hexane, flow rate: 1.5 mL/min) were introduced into M1 by syringe pumps. The resulting solution was passed through R1 (0.79 s) and was mixed with a solution of trimethoxyborane (0.20 M in THF, flow rate: 3.0 mL/min) at M2. The resulting solution was passed through R2 (2.2 s) [10]. The resulting solution was collected in a vessel. Then, a solution of p-iodobenzaldehyde (0.033 M in MeOH, 0.25 equiv.) was added, and the mixing solution was introduced to a monolithic MR produced by Emaus Kyoto Inc. R&D, in which the reaction from 2 to 3 was carried out.
The monolithic MR has a total length of 150 mm and an inside diameter of 4.6 mm. Figure 3 shows a photo of the reactor and an SEM image of the monolith structure inside the reactor. Palladium was supported on the monolith and can be used as a catalyst. The monolithic MRs show good flow characteristics, such as low pressure drop. The operation conditions, such as concentration, pressure, temperature, and flow rate (reaction time), have an impact on the reactor characteristics. In this study, the feed concentration was given from the previous process, and the pressure was set to 400 kPa to avoid boiling. Under this condition, the effects of flow rate and temperature on yield were experimentally investigated using a single reactor system, which is shown in Figure 4. After a steady state was reached, the product solution was collected (10 min). The yield of product was determined by GC analysis. The product was also isolated for characterization. Based on the experimental results shown in Figure 5, it was decided that the reaction would be carried out at a flow rate of 0.4 mL/min and temperature of 90 °C, because they could achieve a high yield and large throughput. Based on this, if the total production rate is set to 2 mL/min, it is necessary to parallelize five reactors in the numbering-up system.

According to the design problem formulation, the location of the two sensors and channel resistances are optimized under the design conditions shown in Table 1. It was assumed that the SRFD is bilaterally symmetrical with respect to a line connecting the compartments 1, 7, 25, and MR3, that the channel resistance of the first compartment is fixed at a constant value, and that the influence of sensor installation on the pressure distribution over the process is negligible. The lower limits of norms of pressure difference vectors were set to 10 kPa. The maximum allowable pressure drop over the system was set to 260 kPa. In addition, the effluent from each MR is discharged to a tank after mixing, and the pressure drop between the outlet of MRs and the tank is negligible in the whole process. The design problem was solved by using a generalized reduction gradient nonlinear solver with a multistart scatter search. The optimal channel resistances are summarized in Table 2. The location of sensors is shown in Figure 9 (left), and the obtained pressure change diagram is shown in Figure 10.

3. Experimental Evaluation of the Developed System

After constructing the experimental system based on the design result, its continuous operation was carried out. In addition, the usefulness of the previously proposed blockage detection and diagnosis method [2] was evaluated for an artificially generated blockage.

The usefulness of the previously proposed blockage detection and diagnosis method [2] was evaluated for an artificially generated blockage. The artificial blockage was realized by closing the valve after the MR. For example, when MR5 was blocked, the flow rates at MR1–4 shifted as shown in Figure 11. It was shown that the flow rate shift becomes large as the MR is closer to MR5. It was also shown that the yield decreased because the reaction time was shortened when the flow rate was increased. Such yield degradation was minimized by using the blockage detection and diagnosis method [2]. Each blocked MR was identified on the basis of the pressure change diagram, which is shown in Figure 10. Closed and open circles correspond to experiment and PDC model-based simulation, respectively. It was concluded that the usefulness of the proposed blockage detection and diagnosis method was demonstrated in the reaction experiment process.

A numbering-up system consisting of five monolithic MRs connected to an SRFD with the function of blockage detection was developed, and the practicality of the system was demonstrated using a Suzuki–Miyaura coupling reaction. 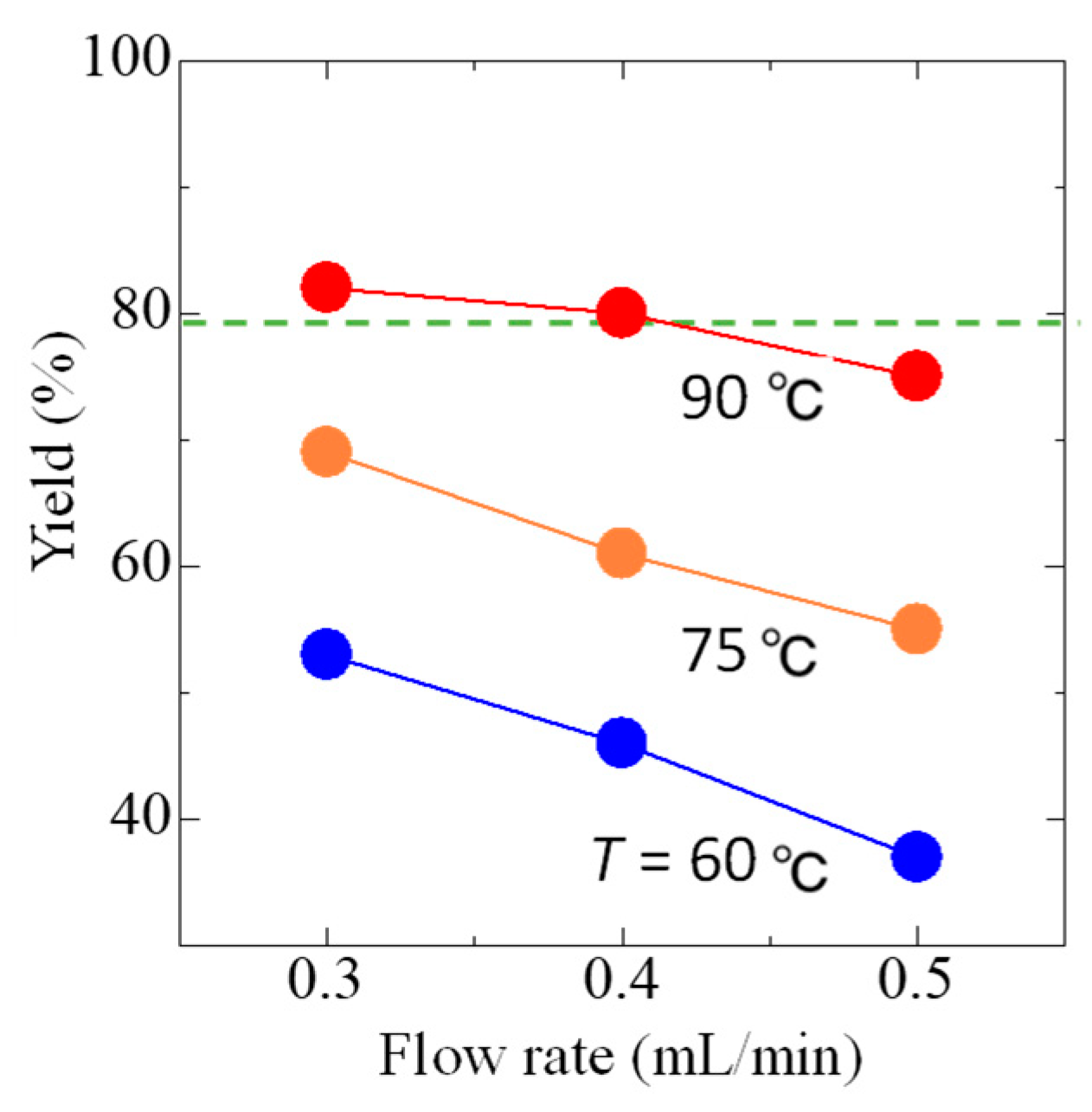 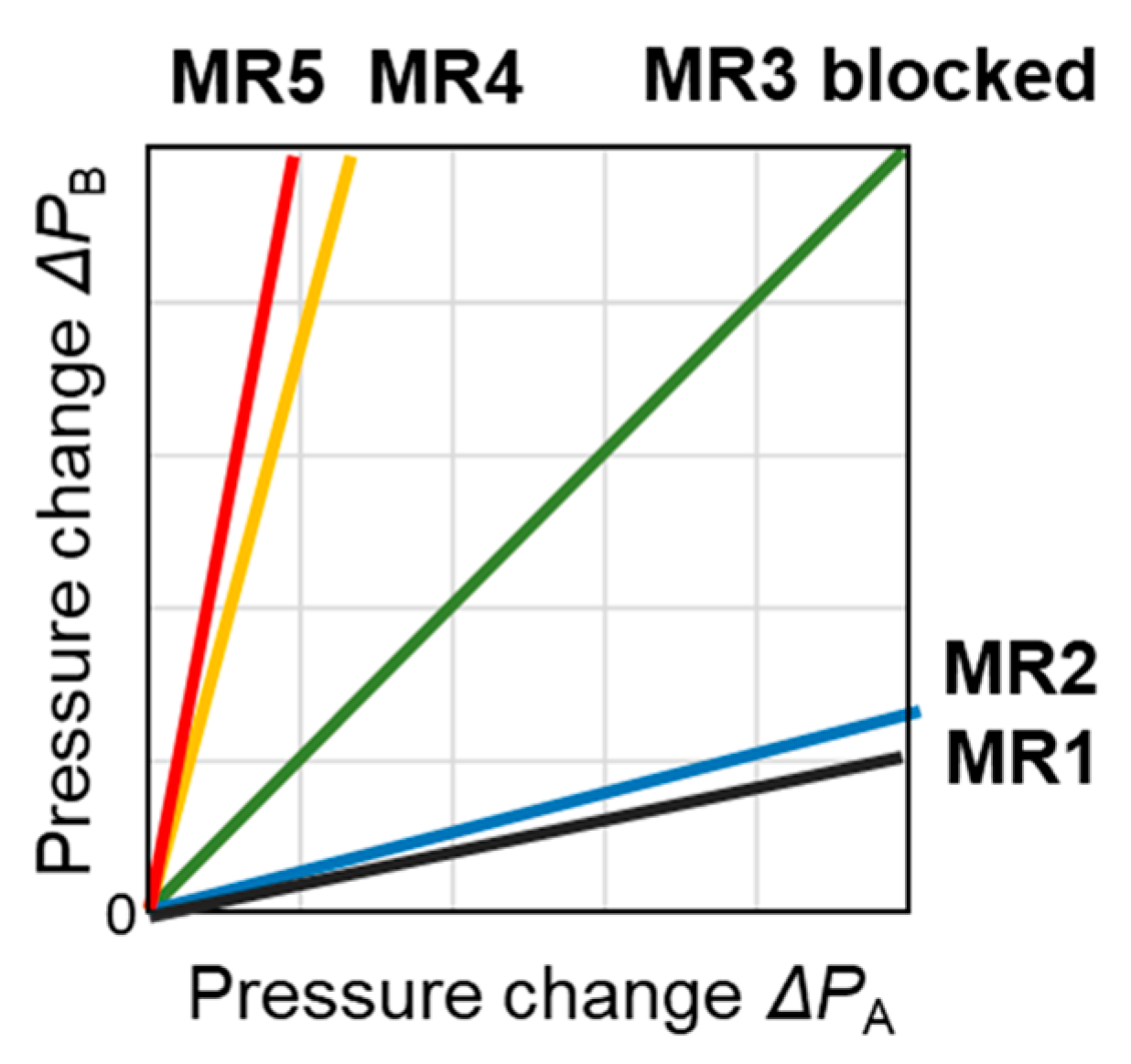 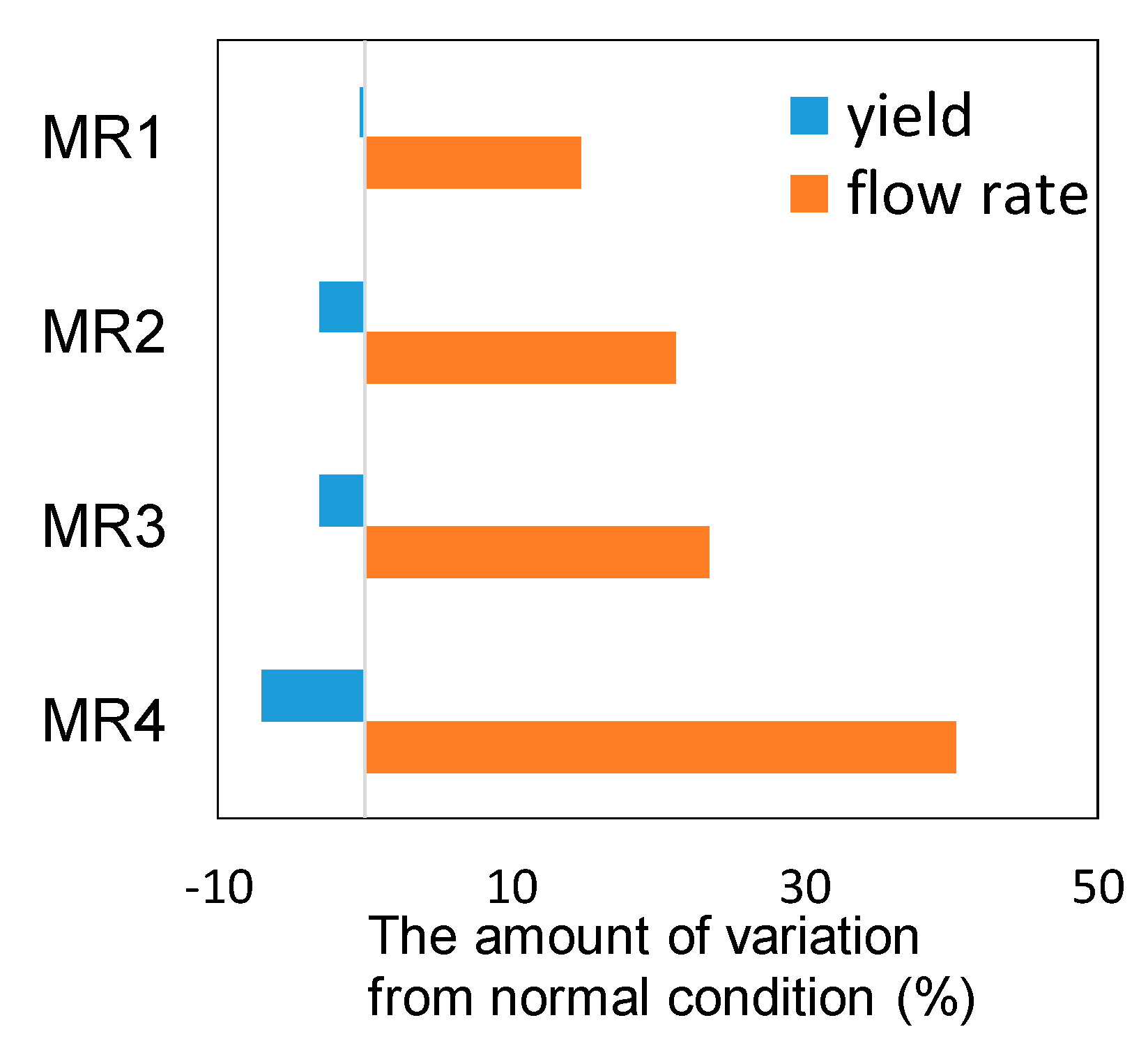