Metal Complexes Containing Redox-Active Ligands in Oxidation of Hydrocarbons and Alcohols: A Review

Ligands are innocent when they allow oxidation states of the central atoms to be defined. A noninnocent (or redox) ligand is a ligand in a metal complex where the oxidation state is not clear. Dioxygen can be a noninnocent species, since it exists in two oxidation states, i.e., superoxide (O2−) and peroxide (O22−). This review is devoted to oxidations of C–H compounds (saturated and aromatic hydrocarbons) and alcohols with peroxides (hydrogen peroxide, tert-butyl hydroperoxide) catalyzed by complexes of transition and nontransition metals containing innocent and noninnocent ligands. In many cases, the oxidation is induced by hydroxyl radicals. The mechanisms of the formation of hydroxyl radicals from H2O2 under the action of transition (iron, copper, vanadium, rhenium, etc.) and nontransition (aluminum, gallium, bismuth, etc.) metal ions are discussed. It has been demonstrated that the participation of the second hydrogen peroxide molecule leads to the rapture of O–O bond, and, as a result, to the facilitation of hydroxyl radical generation. The oxidation of alkanes induced by hydroxyl radicals leads to the formation of relatively unstable alkyl hydroperoxides. The data on regioselectivity in alkane oxidation allowed us to identify an oxidizing species generated in the decomposition of hydrogen peroxide: (hydroxyl radical or another species). The values of the ratio-of-rate constants of the interaction between an oxidizing species and solvent acetonitrile or alkane gives either the kinetic support for the nature of the oxidizing species or establishes the mechanism of the induction of oxidation catalyzed by a concrete compound. In the case of a bulky catalyst molecule, the ratio of hydroxyl radical attack rates upon the acetonitrile molecule and alkane becomes higher. This can be expanded if we assume that the reactions of hydroxyl radicals occur in a cavity inside a voluminous catalyst molecule, where the ratio of the local concentrations of acetonitrile and alkane is higher than in the whole reaction volume. The works of the authors of this review in this field are described in more detail herein. View Full-Text
Keywords: hydrogen peroxide; alkanes; alcohols; alkyl hydroperoxides; mechanisms of oxidation; metal-complex catalysis; oxygen; oxygenation; peroxyacids hydrogen peroxide; alkanes; alcohols; alkyl hydroperoxides; mechanisms of oxidation; metal-complex catalysis; oxygen; oxygenation; peroxyacids
►▼ Show Figures 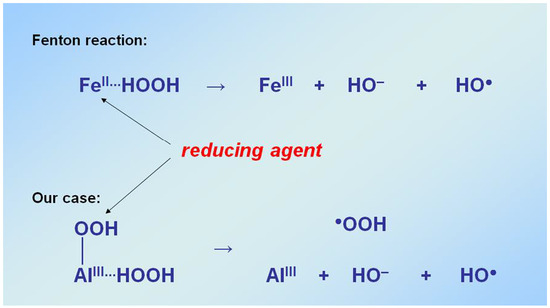