:
In the last two decades, boron-based catalysis has been gaining increasing traction in the field of organic synthesis. The use of halogenated triarylboranes as main group Lewis acid catalysts is an attractive strategy. It has been applied in a growing number of transformations over the years, where they may perform comparably or even better than the gold standard catalysts. This review discusses methods of borane synthesis and cutting-edge boron-based Lewis acid catalysis, focusing especially on tris(pentafluorophenyl)-borane [B(C6F5)3], and other halogenated triarylboranes, highlighting how boron Lewis acids employed as catalysts can unlock a plethora of unprecedented chemical transformations or improve the efficiency of existing reactions.
Keywords:
boron; boranes; tris(pentafluorophenyl)borane; Lewis acid; catalysis

Boron reagents are often employed as Lewis acids because of their strong electrophilic nature by virtue of a vacant p-orbital which can readily accept electrons from donor molecules. Many boranes have been synthesised and employed over the years, including trialkyl-, triaryl- and trihalo-boranes. As the field of boron chemistry was growing, the variety of boron reagents grew along. In fact, over the years, a series of boron-based catalysts of tunable acidity and increasing structural complexity arose (Figure 1a) [1]. One of the most interesting examples are boron trihalides BX3 (X = F, Cl). Although they are exceptionally efficient as catalysts, they are extremely moisture-sensitive and, additionally, its volatile nature makes them difficult to handle. In the 1950s, investigations were carried out on perfluoroalkyl boranes, whose highly electronegative fluorinated ligands confer strong Lewis acidity to the boron centre and the B–C bonds were expected to be less hydrolytically sensitive. However, perfluoroalkylboranes exhibit thermal instability [2]. Therefore, the focus was shifted on halogenated triarylboranes, such as tris(penta-fluorophenyl)-borane [B(C6F5)3], commonly known as BCF, which was first synthesised in the 1960s by Massey (Figure 1b) [3,4]. Although the scientific community was aware of its interesting Lewis acid properties, the field remained dormant until it was used as initiator in the polymerisation of olefins with metallocenes [5,6,7,8,9,10]. Few years later it gained further attention since Piers discovered its capability to catalyse hydrosilylation reaction of carbonyl compounds [11]. In 2006, BCF received a new momentum thanks to Stephan’s finding that boranes bearing halogenated aryl groups can form with phosphines an adduct named “frustrated Lewis pairs” (FLPs), able to activate small molecules, such as H2 and CO2, for example [12,13]. This review highlights recent reports of emergent boron chemistry, beginning by examining new methodologies for the synthesis of novel Lewis acidic boranes, to highlight how this field has grown in the last few years. Finally, examples on the use of boron-based catalysts will also be discussed. The focus of the review is on the most recent examples, although some historical examples are included to provide the reader with a better overview.

Homoleptic halogenated triarylboranes can be synthesised in two ways: either via the Grignard method or the lithiation method. In 1963 Massey and coworkers first described the synthesis of BCF using a Grignard reagent with BCl3 [3] later, whereas the lithiation procedure was reported in the patent literature in 1994 [14]. General procedures are both shown in Scheme 1. To obtain the desired product in higher yields, modifications and different purification strategies have been adopted. B(2-FC6H4)3, B(4-FC6H4)3, B(2,6-F2C6H3)3, B(2,4,6-F3C6H2)3, B(3,4,5-F3C6H2)3, and B(3,5-(CF3)2C6H3)3 have been synthesised employing the Grignard method with subsequent purification (sublimation) [15,16,17,18,19]. Boranes with trifluoromethyl groups on the aryl ring, B(2,4-(CF3)2C6H3)3, B(2,5-(CF3)2C6H3)3, B(3,5-(CF3)2C6H3)3 and B(2-(CF3)C6H4)3 have been prepared by the lithiation method [20,21,22]. Bulkier analogues of BCF, e.g., [B(C10F7)3] and tris(perfluorobiphenyl) borane [B(2-(C6F5)C6F4)3], have also been synthesised by the lithiation method [23,24].
The synthesis of the tris(perfluorotolyl)borane [B(4-(CF3)C6F4)3] 8 was shown by Mitzel and coworkers using a Grignard reagent to prepare an arylcopper intermediate 7 as shown in Scheme 2 [25]. The copper intermediate underwent a transmetallation reaction with BBr3 to generate the desired borane 8.
The synthesis of BCF 11 was carried out for the first time by Massey et al. by preparing it in pentane, since boron compounds normally complex readily with ethers and make isolation of the desired product much more difficult (Scheme 3) [3].
Whilst the Lewis acidity and catalytic activity of halogenated triarylboranes can be tuned by varying the number of halogen atoms and their position on the aryl rings, further fine-tuning is possible through the synthesis of heteroleptic boranes. Few heteroleptic boranes have been synthesised because of the complexity of the procedures; the synthesis of B(C6F5)2(2-(C6F5)C6F4) is probably the simplest heteroleptic borane: it was prepared replacing one perfluorophenyl moiety with a perfluorobiphenyl motif. The synthetic procedure for preparing the 2-bromononofluoro-biphenyl portion involves the reaction of (C6F5)Li and C6F5Br. Then, the addition of BCl3 to Sn(Me)2(C6F5)2 14 generated the B(C6F5)2Cl 15. Finally, the reaction between the two partners, B(C6F5)2Cl 15 and 2-lithiumnonofluoro-biphenyl 13, afforded B(C6F5)2(2-(C6F5)C6F4) 16 as shown in Scheme 4 [26].
Soós research group performed the synthesis of other interesting heteroleptic boranes bearing chlorinated and fluorinated aryl rings 21 as shown in Scheme 5. The dihalobenzene derivatives 17 were reacted with n-butyl lithium and trimethyl borate, affording boronic acids 18. They were then converted into the potassium trifluoroborate salt 19, that could be reacted with Grignard reagents bearing different aryl frameworks to form the desired heteroleptic boranes. These boranes have the great advantage of being moisture tolerant thanks to the steric hindrance of the chlorine atoms which prevent water from binding to the boron centre [27].
The first example of halogenated triarylborane bearing three different aryl rings, B(C6F5)(C6Cl5)(3,5-(CF3)2C6H3) 27, was synthetised from borane dimethylsulfide 22 through five synthetic steps. First, a single equivalent of Li(C6F5) was generated at −78 °C and was reacted with borane dimethylsulfide 22 to form [H3B(C6F5)]. The excess hydride was abstracted with TMSCl obtaining H2B(C6F5) 23. The trifluoromethyl bearing aryl ring was installed via a similar strategy by adding Li(3,5-(CF3)2C6H3) and abstraction of the excess hydride by TMSCl. The resulting HB(C6F5)(3,5-(CF3)2C6H3) 24 was reacted with excess methanol and then BBr3 to form BrB(C6F5)(3,5-(CF3)C6H3) 26. Finally, the bromoborane was reacted with half an equivalent of Zn(C6Cl5)2 to install the last aryl ring, by affording the desired heteroleptic borane 26 (Scheme 6) [28].

Main group catalysis found fertile soil in carbon–carbon bond forming reactions, hydrogenation, hydroboration and many other transformations, which are traditionally achieved by metal-based catalysis. Even if this field remained dormant for a long time, mainly because of the aforementioned technical difficulties, once those were overcome, the main group catalysis progressed quickly, leading to the development of a wide range of novel and mild strategies to perform the classical chemical transformations. The key advantages of employing main-group elements in catalysis is their generally lower cost, which makes them more attractive to industry, and their lower toxicity compared with heavy-metals. The current focus of many research groups involves the development of new methodologies to make catalysis ‘‘greener”. Using earth-abundant, less toxic, first-row transition metals, chemists are re-examining well known strategies to make them more environmentally-friendly [29,30,31]. Boron-based compounds are widely employed as main group catalysts: boronic acids prominently for the activation of hydroxy functional groups [32], doubly B-doped (hetero)arenes as activators of p-block molecules [33], and boranes capable of activating a large number of substrates via a variety of transformations (Figure 2). While boronic acids and doubly B-doped (hetero)arenes are extensively employed in organic synthesis, boranes catalysis is a less developed field. Boranes can act as Lewis acid catalysts thanks to their empty p-orbital on the central boron atom. The basis for boranes-mediated Lewis acid catalysis is led by the attack and subsequent release of their empty p-orbital. BCF is probably the catalyst that has received most of the attention, as it will be evident from the following examples. An additional advantage in terms of acidic nature of BCF is given by the three electron-deficient pentafluorophenyl rings directly bonded to the boron centre, placing the Lewis acidity of BCF between the ones of BF3·Et2O and BCl3. Moreover, the catalytic reactivity of BCF is enhanced by the fluorine atoms of the pentafluorophenyl ring, which are able to interact with substrates via hydrogen bonding or other electrostatic interactions. The pentafluorophenyl rings provide extra bulkiness to the BCF, which inhibits the formation of the classical Lewis acid–base adduct. Another strong point for its use as catalyst is its high thermal stability. This property makes it suitable for high-temperature reactions that can easily rival transition metal catalysts [2,34,35,36,37]. This versatile catalyst also possesses the ability to coordinate with lone pair of heteroatoms, that promotes various defunctionalisation reactions as well as valuable functional groups incorporation via a new C–C or C–heteroatom bond.
In the following sections, representative ground-breaking examples in this field over the last five years will be discussed.

The use of boranes in catalysis has recently seen an increasing interest; besides exploring new reactivities, boron catalysis allows to perform known reactions in milder conditions. The difficulty in synthesising and handling boron catalysts caused this research field to remain dormant for long time. This review focused on the recent developments to provide an overview of the field and a perspective of where it may be heading. In fact, given the traction and the importance in synthesis that it is currently gaining, this relatively new field of catalysis holds high potential and will continue to greatly contribute to synthetic chemistry, both in academia and industry. 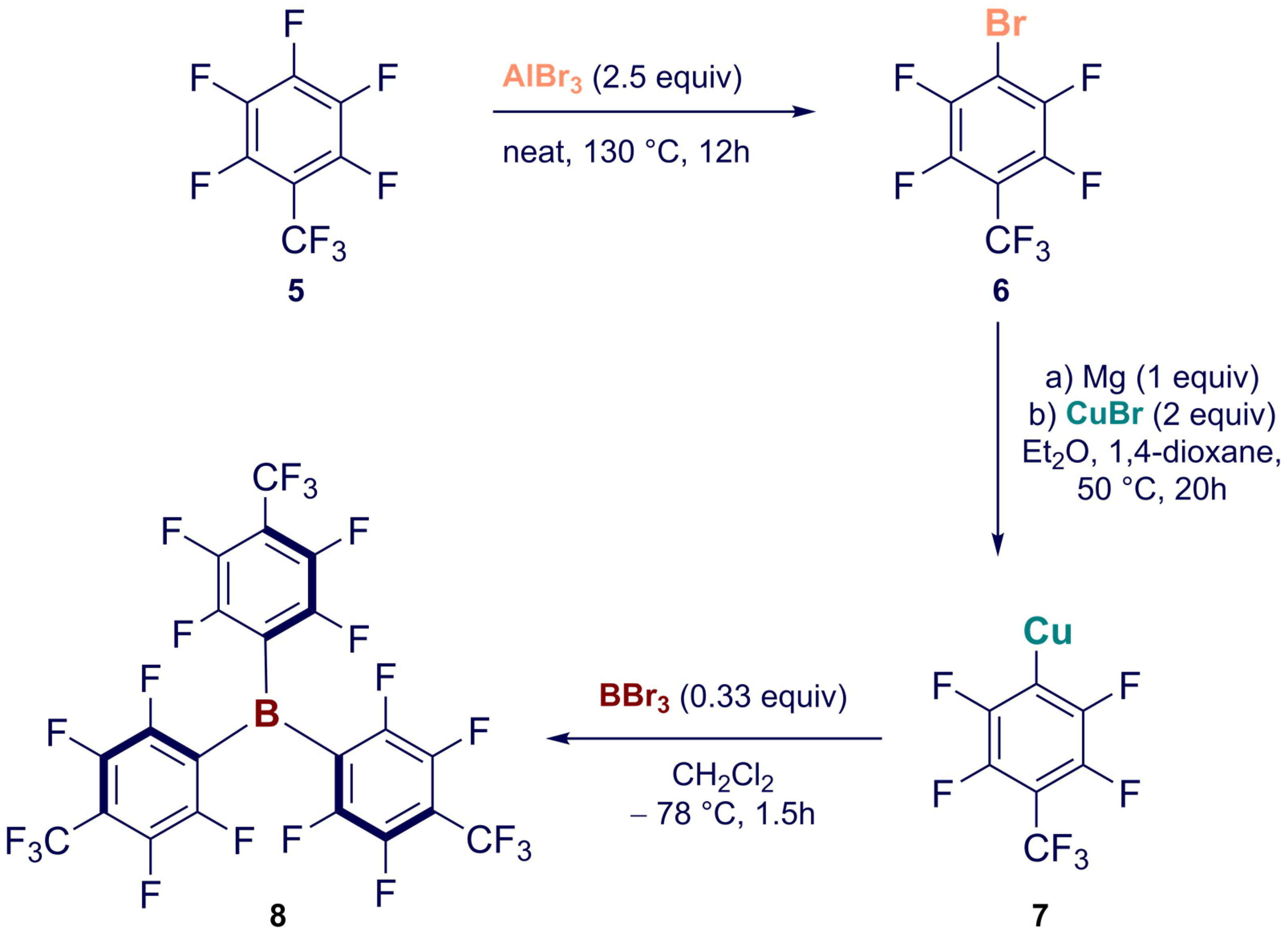 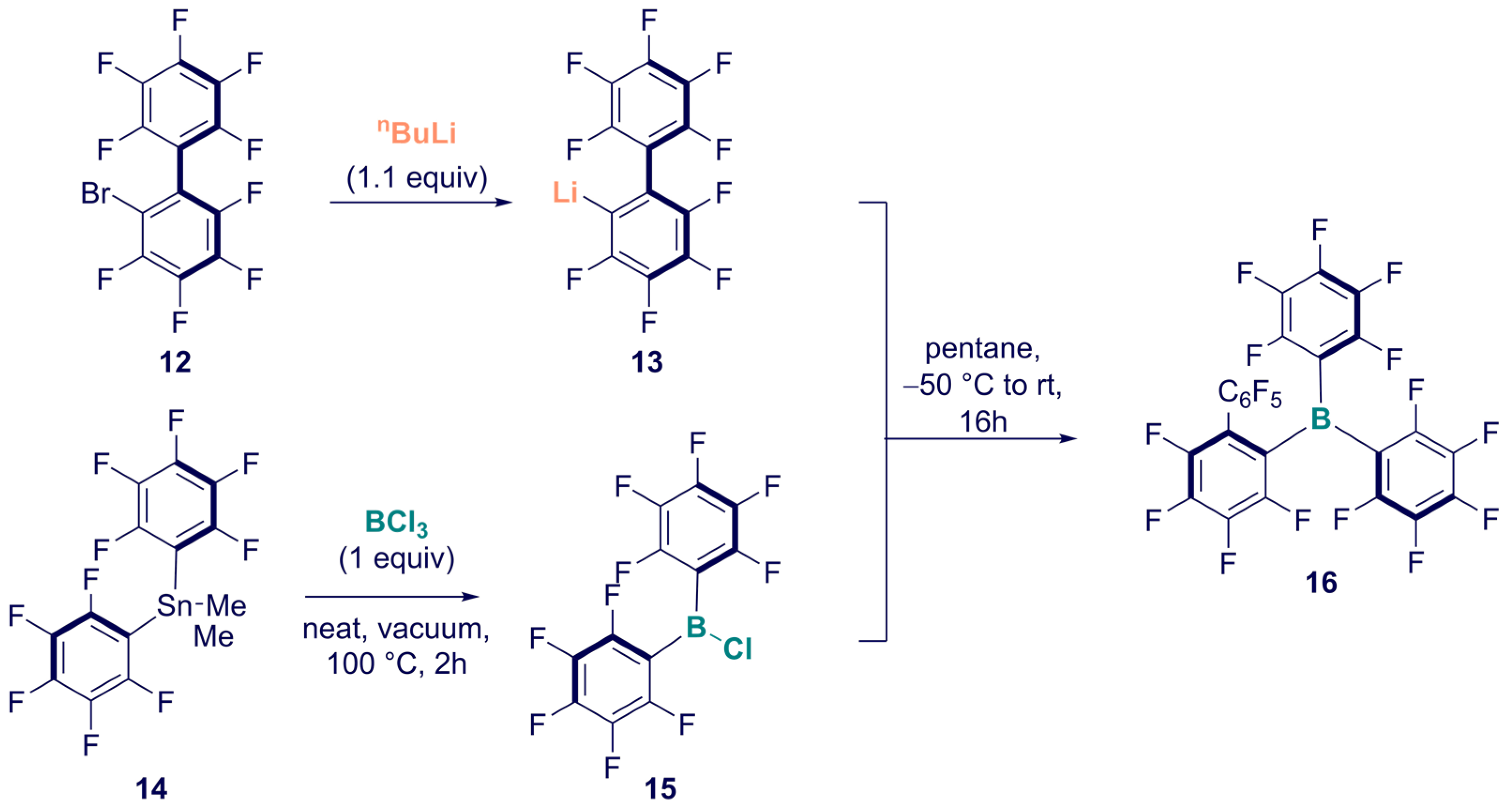 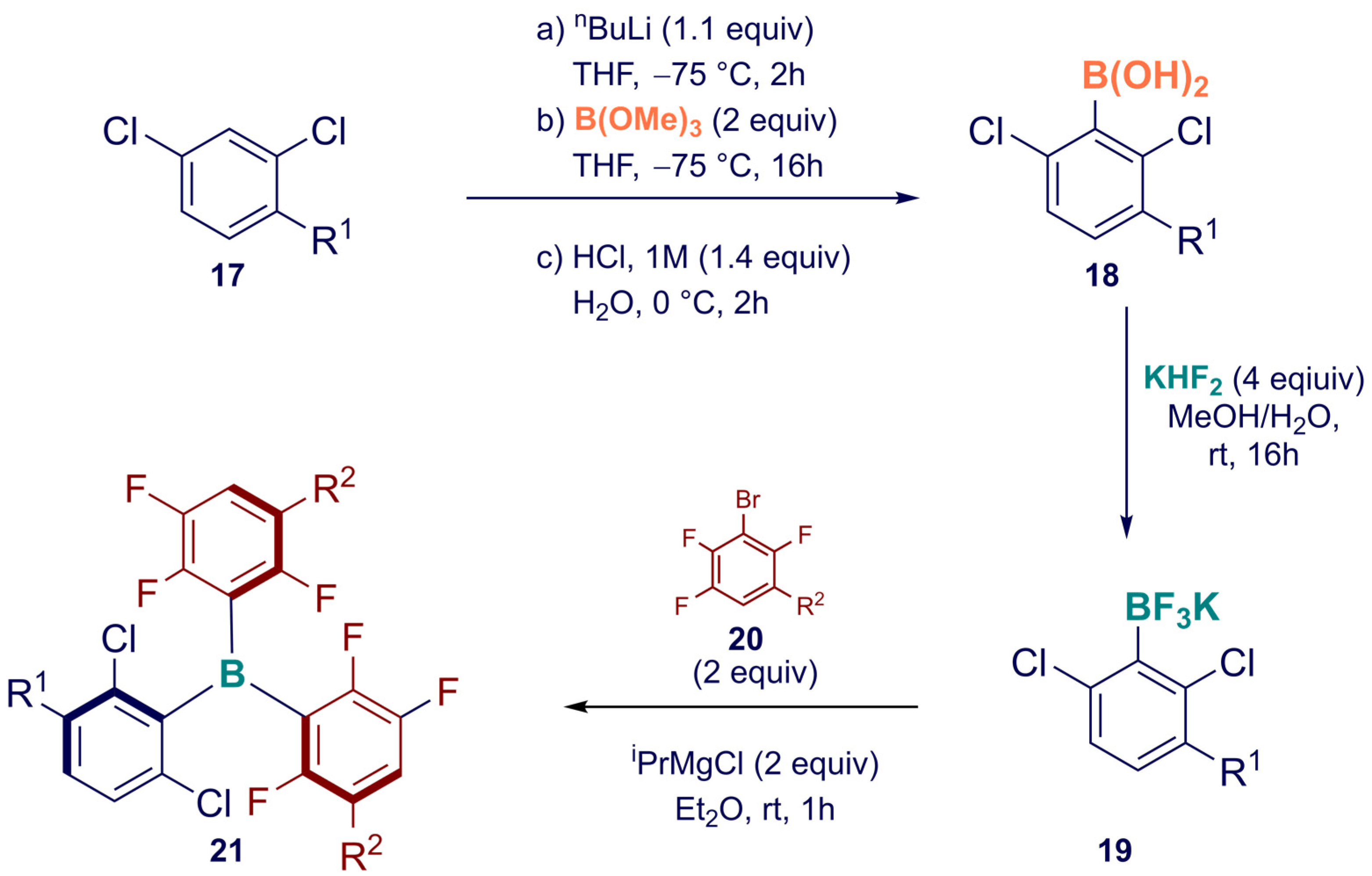 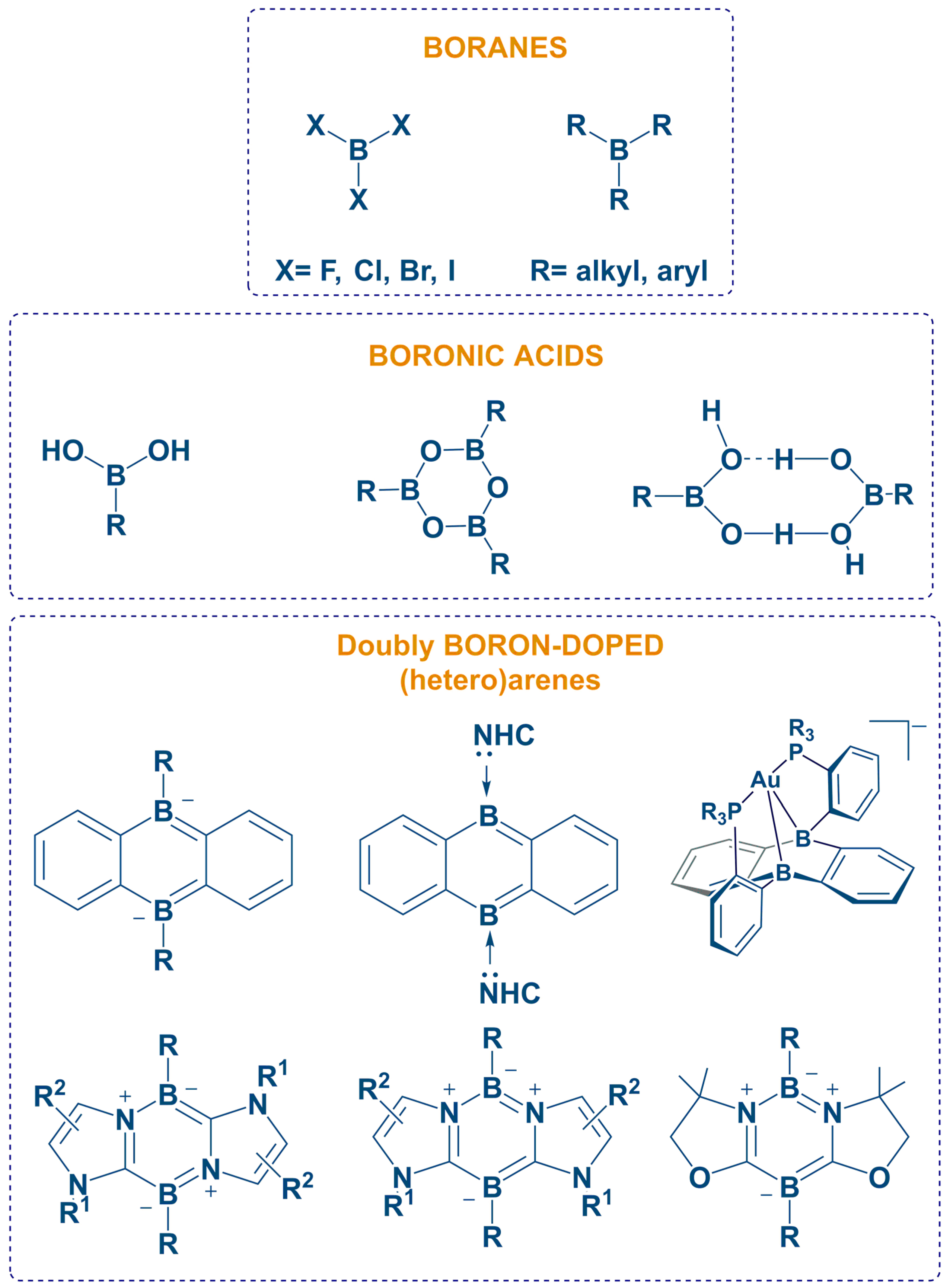 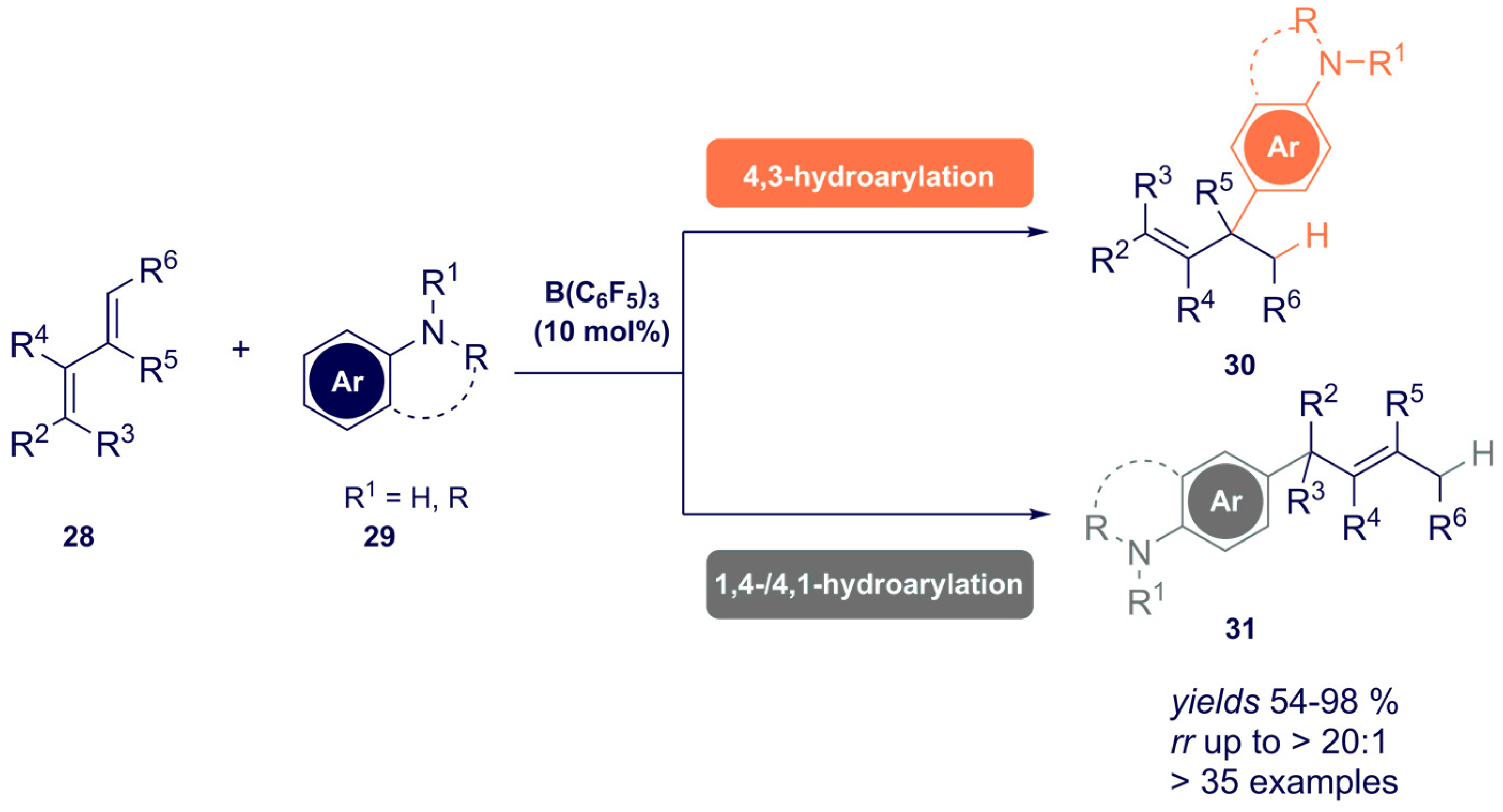 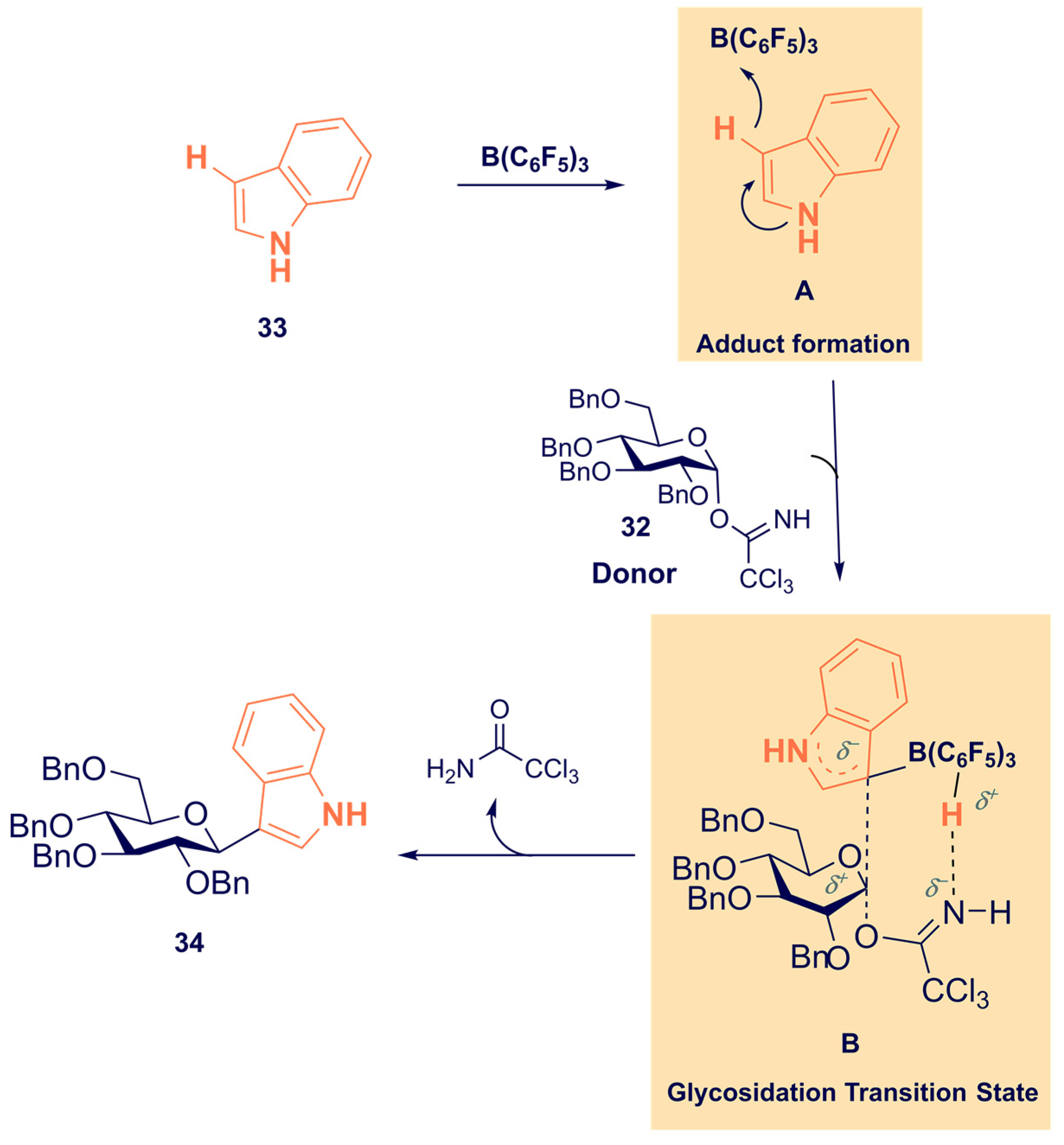 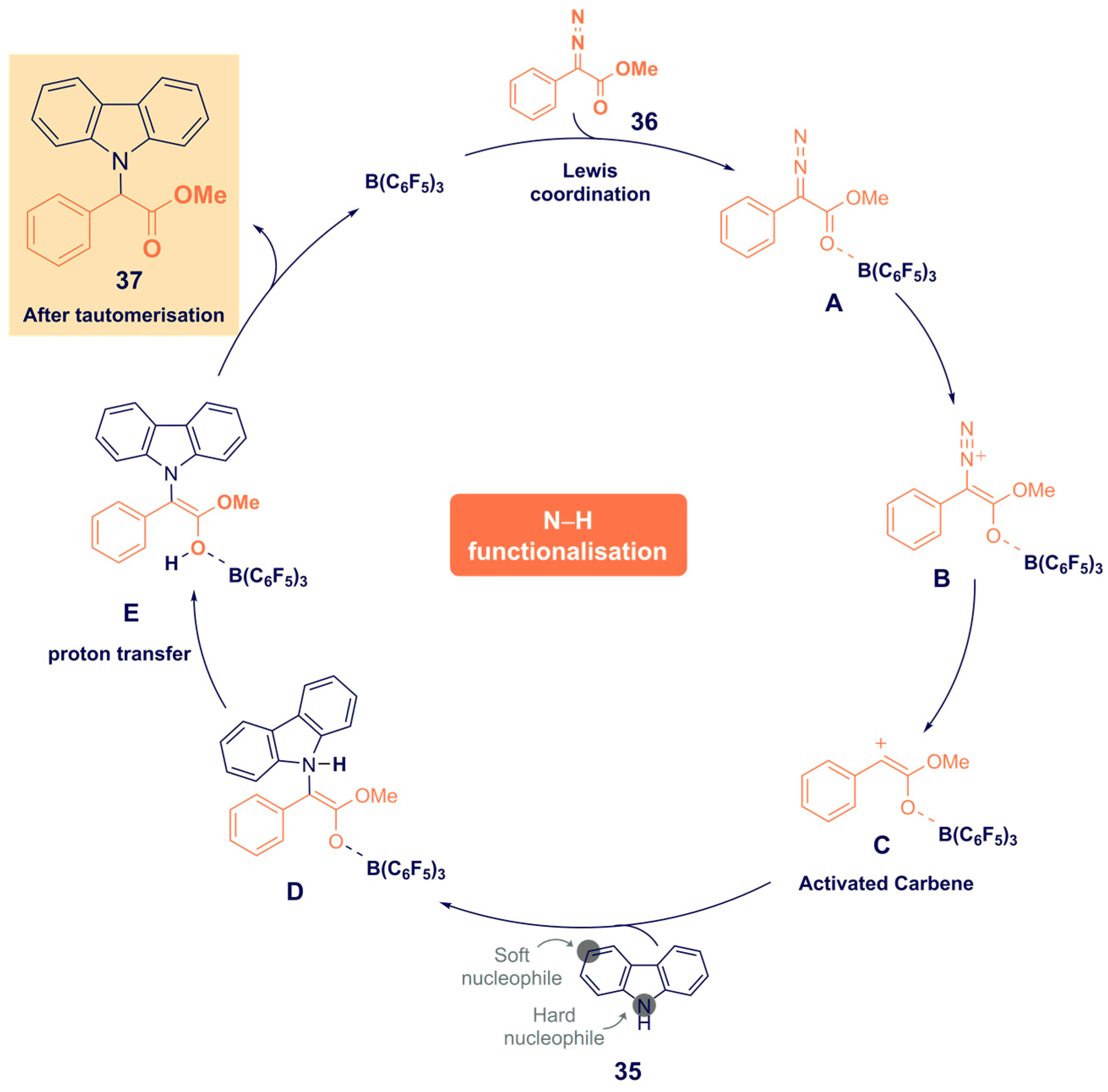 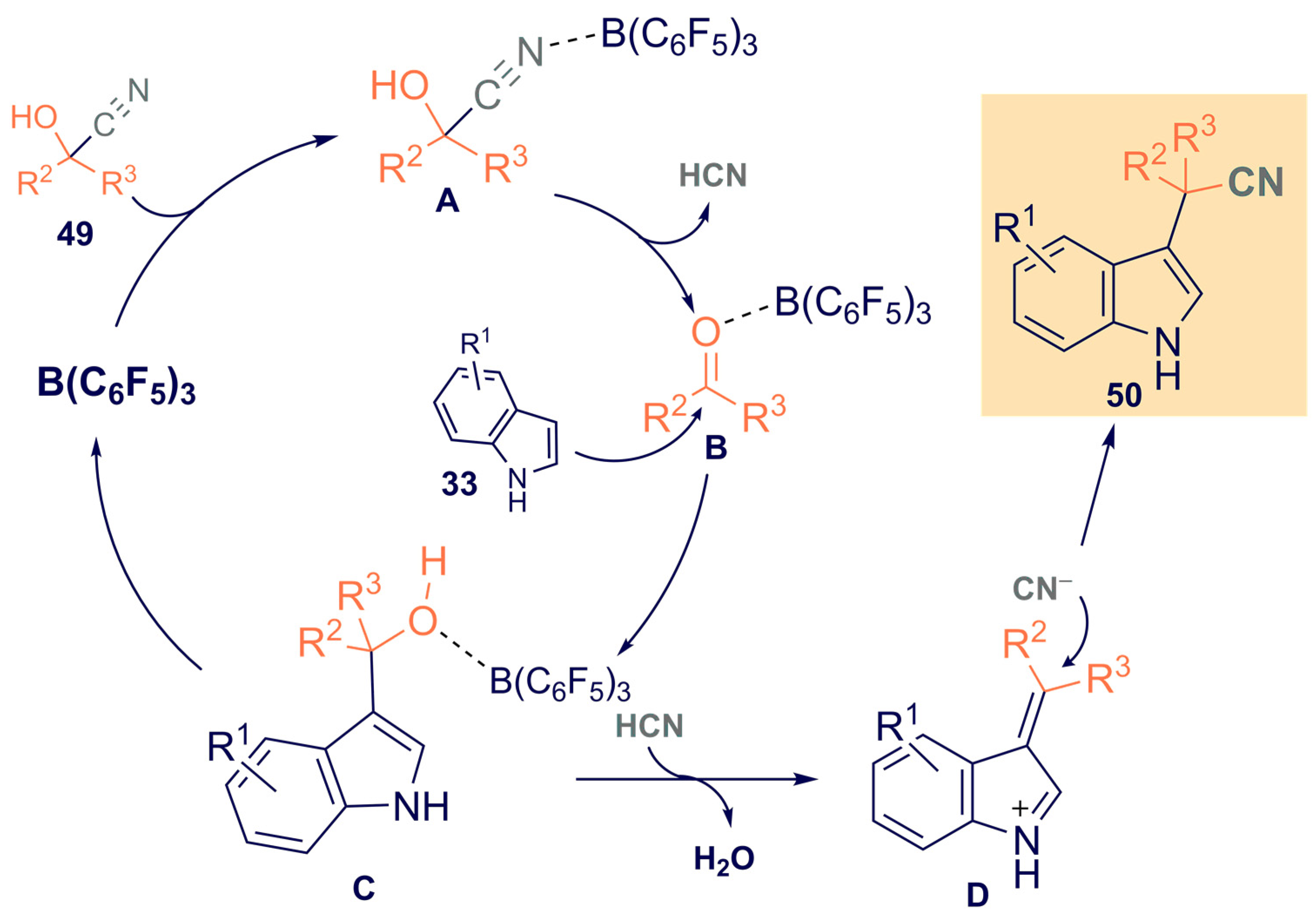 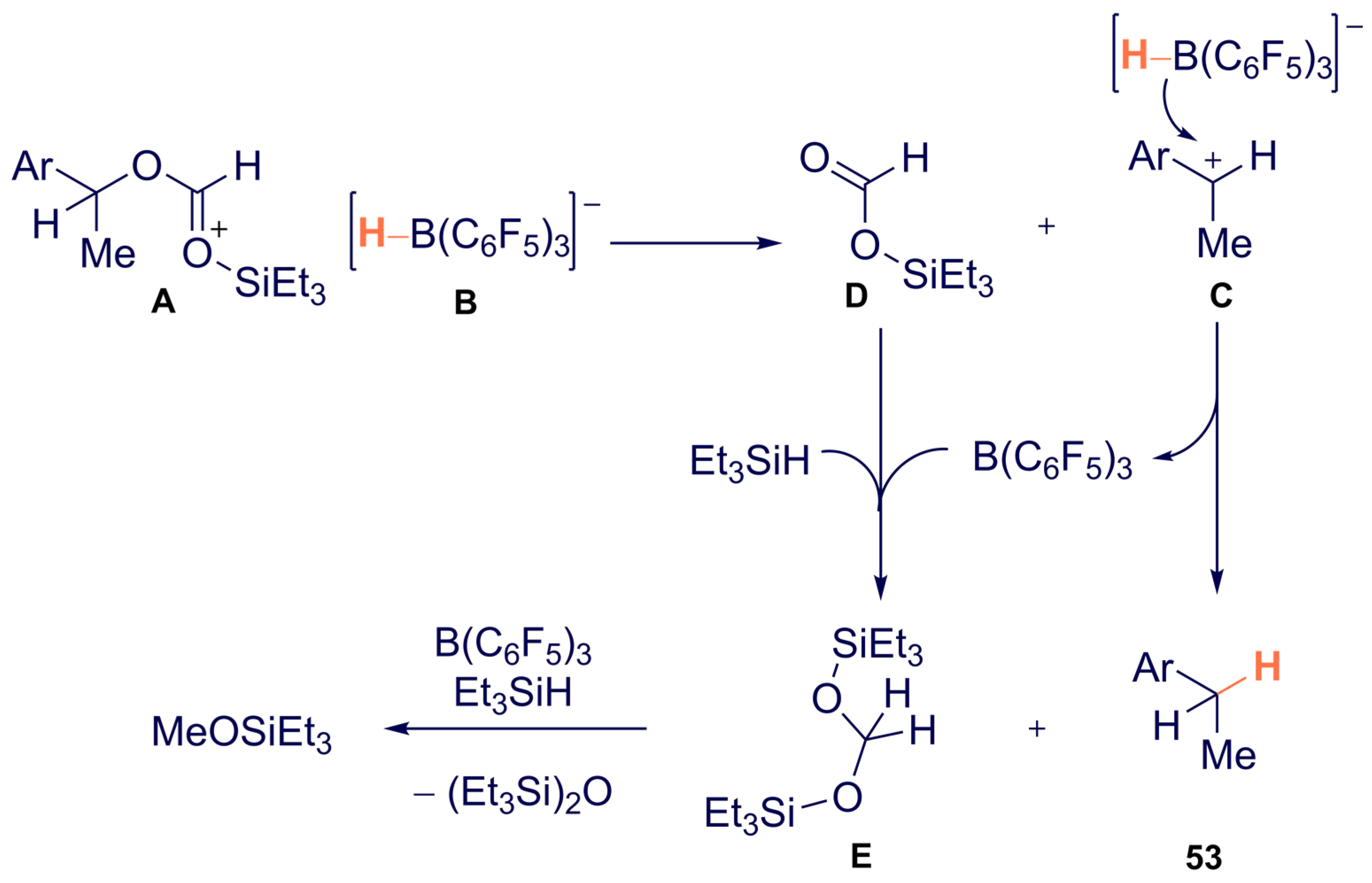 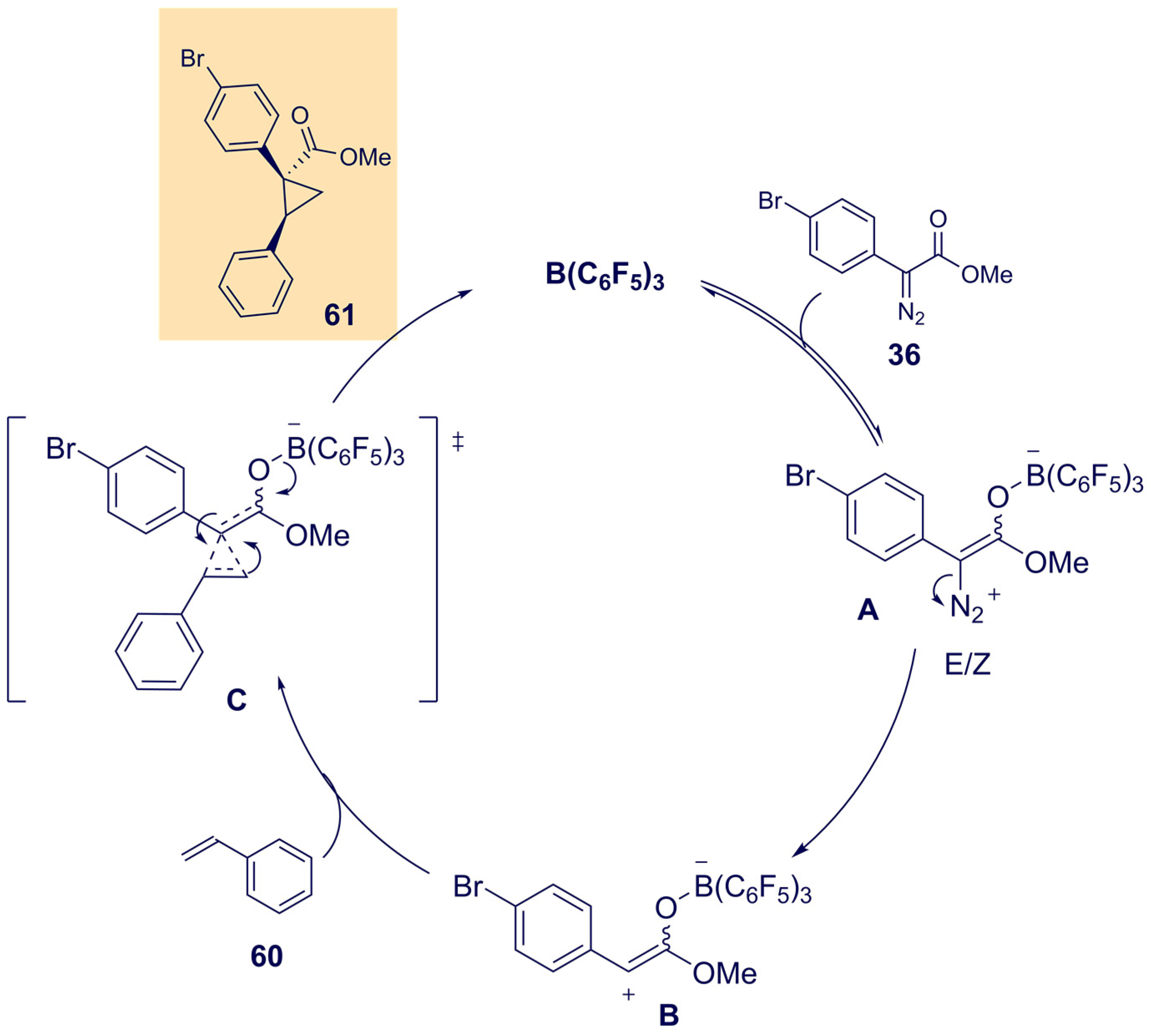 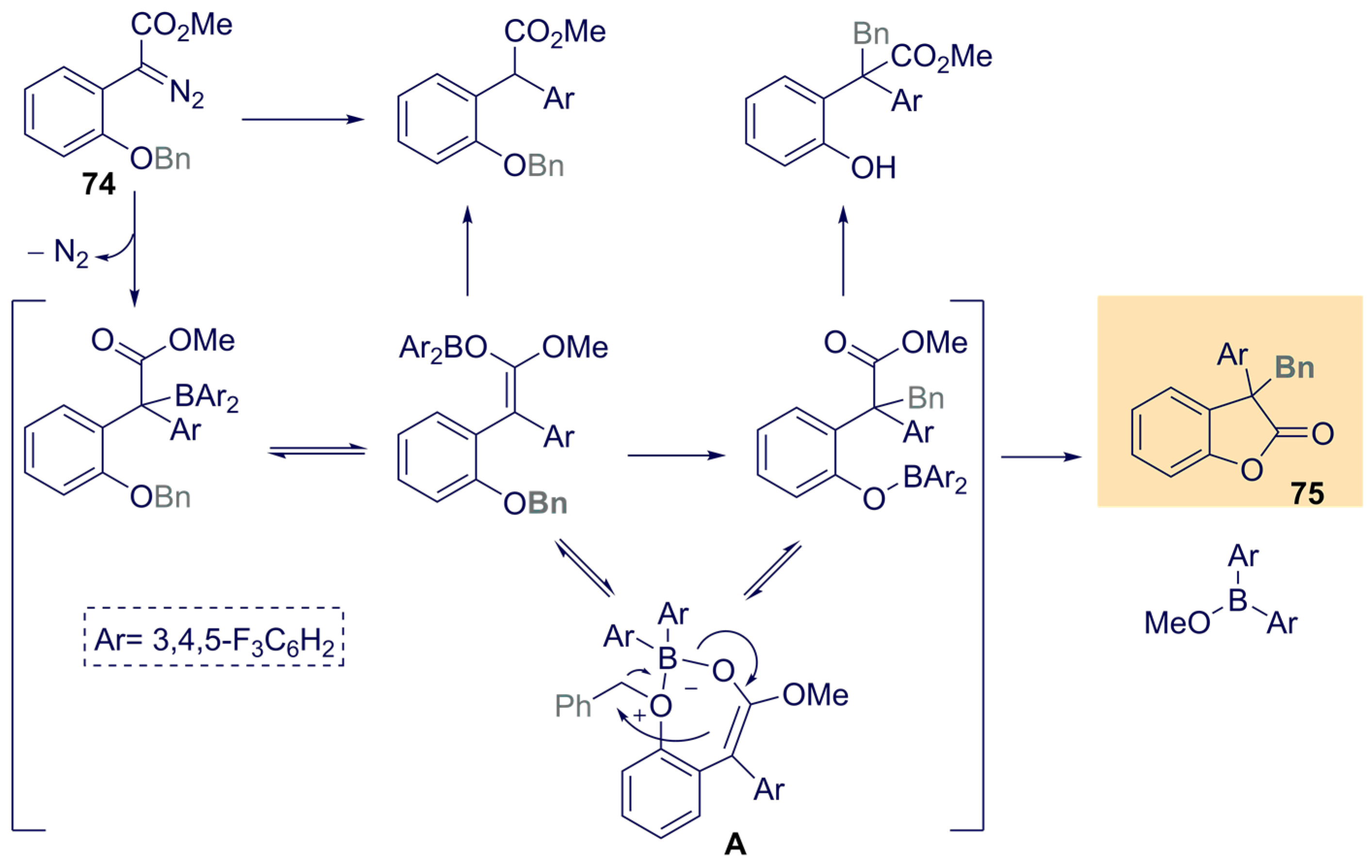 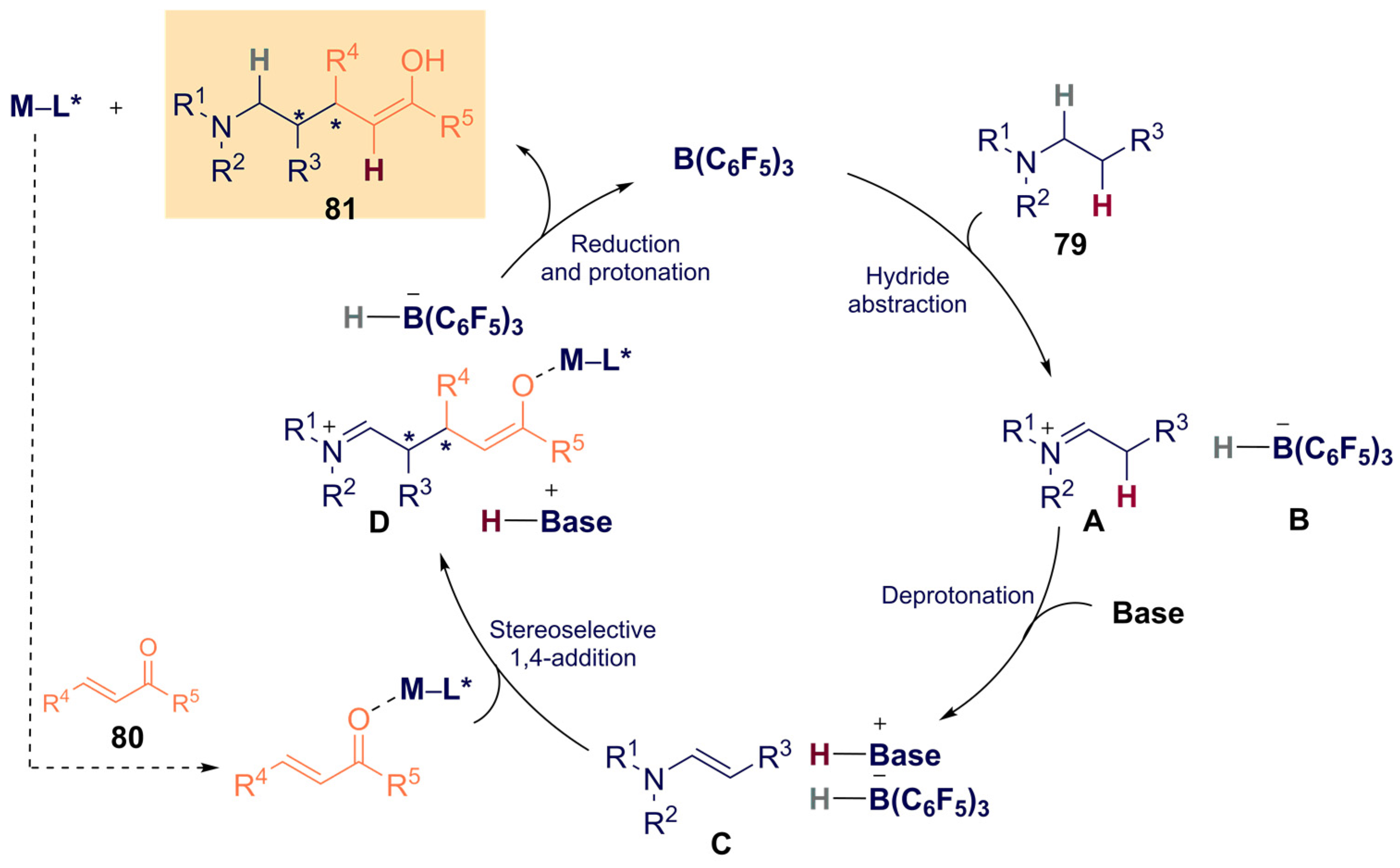 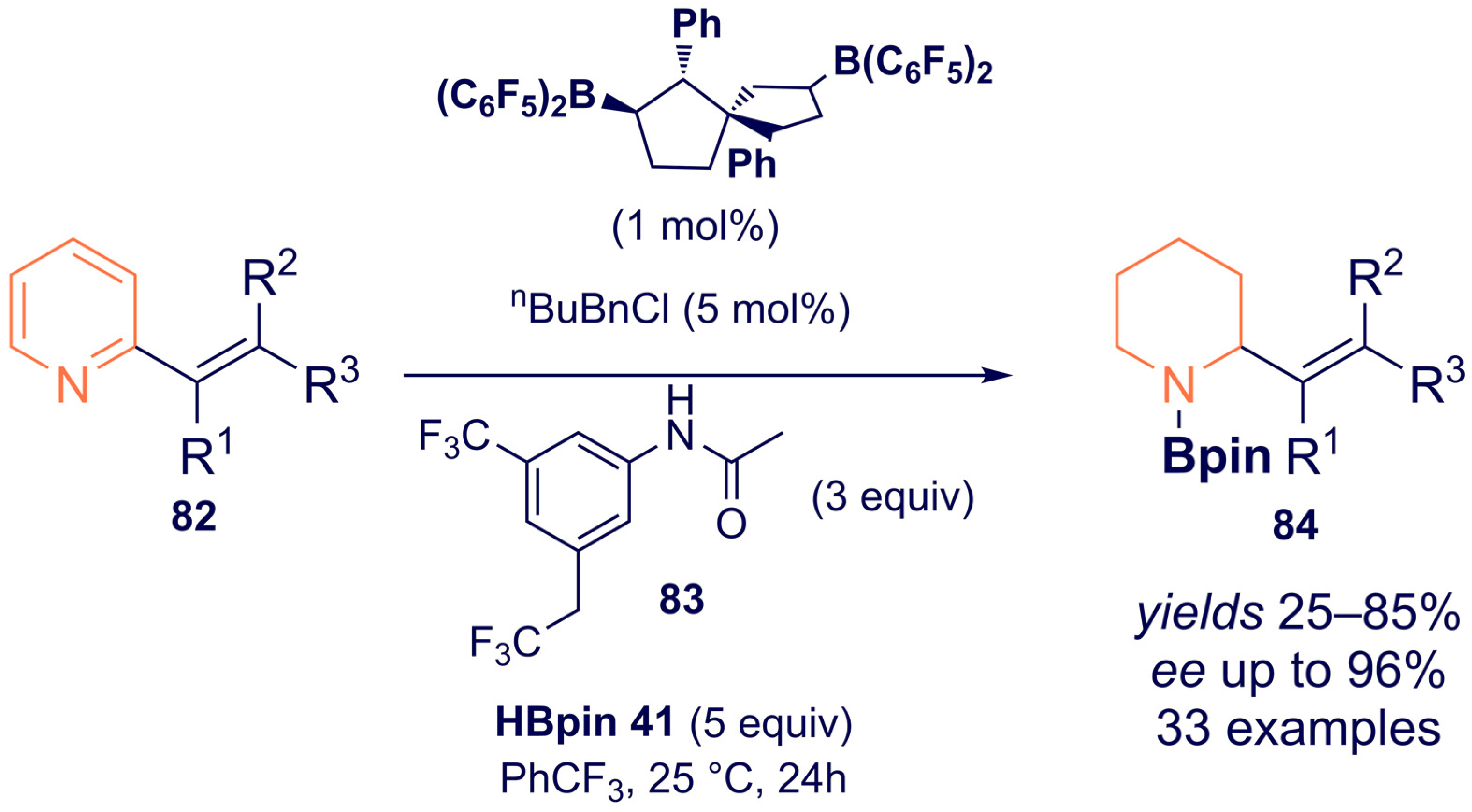 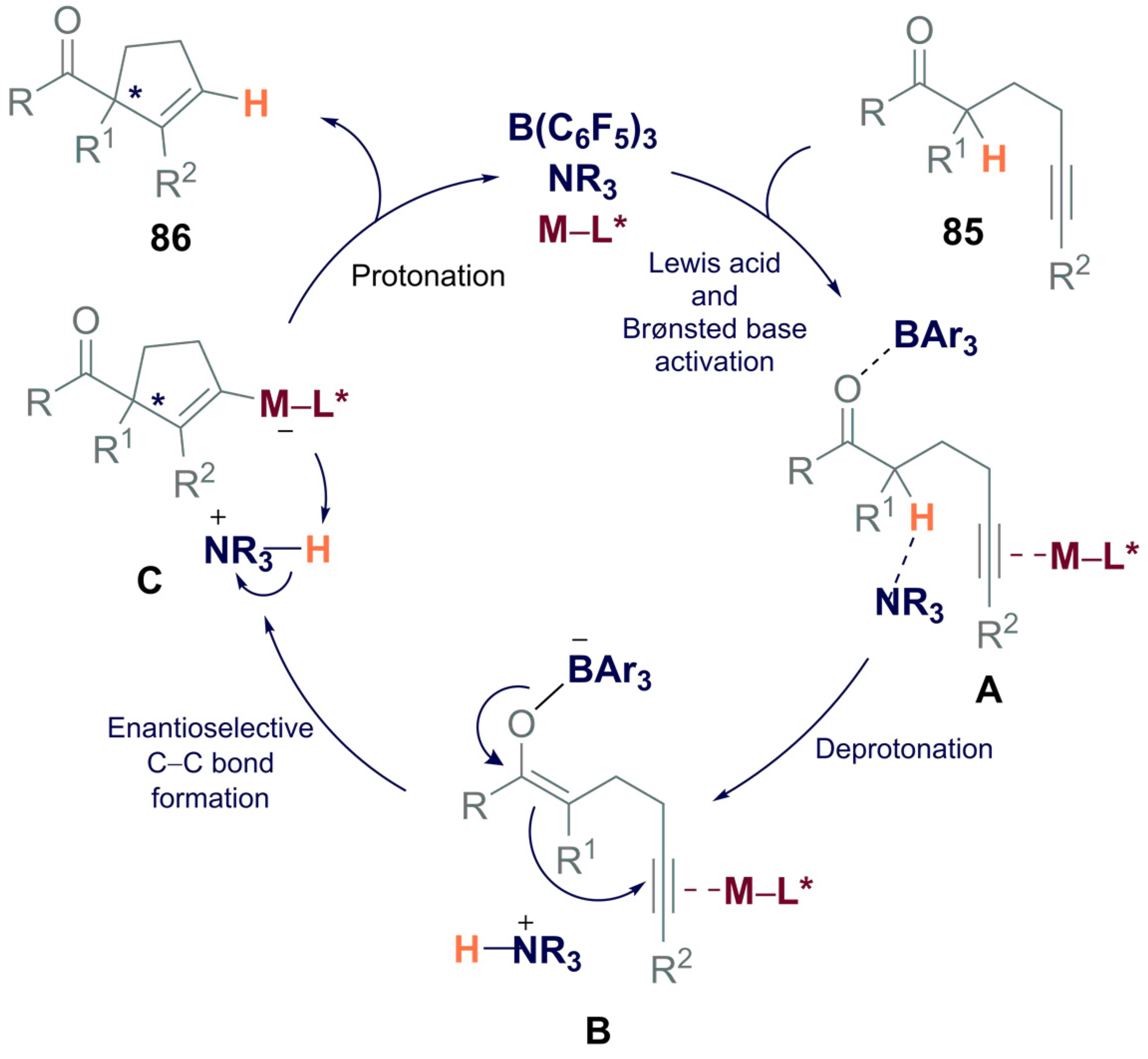