The Ionic Organic Cage: An Effective and Recyclable Testbed for Catalytic CO2 Transformation

Metal sulphides constitute cheap, naturally abundant, and environmentally friendly materials for energy storage applications and chemistry. In particular, iron (II) monosulphide (FeS, mackinawite) is a material of relevance in theories of the origin of life and for heterogenous catalytic applications in the conversion of carbon dioxide (CO2) towards small organic molecules. In natural mackinawite, Fe is often substituted by other metals, however, little is known about how such substitutions alter the chemical activity of the material. Herein, the effect of Ni doping on the structural, electronic, and catalytic properties of FeS surfaces is explored via dispersion-corrected density functional theory simulations. Substitutional Ni dopants, introduced on the Fe site, are readily incorporated into the pristine matrix of FeS, in good agreement with experimental measurements. The CO2 molecule was found to undergo deactivation and partial desorption from the doped surfaces, mainly at the Ni site when compared to undoped FeS surfaces. This behaviour is attributed to the energetically lowered d-band centre position of the doped surface, as a consequence of the increased number of paired electrons originating from the Ni dopant. The reaction and activation energies of CO2 dissociation atop the doped surfaces were found to be increased when compared to pristine surfaces, thus helping to further elucidate the role Ni could have played in the reactivity of FeS. It is expected that Ni doping in other Fe-sulphides may have a similar effect, limiting the catalytic activity of these phases when this dopant is present at their surfaces. View Full-Text
Keywords: iron sulphides; mackinawite; density functional theory; carbon dioxide (CO2) adsorption; nickel doping iron sulphides; mackinawite; density functional theory; carbon dioxide (CO2) adsorption; nickel doping
►▼ Show Figures 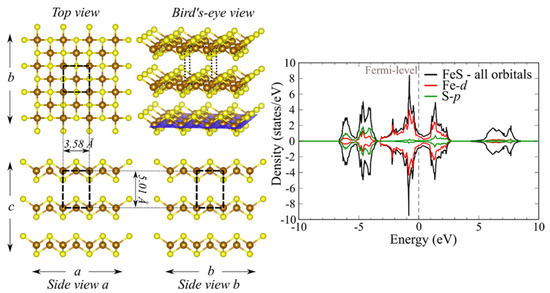