Diaryliodonium salts are air- and moisture-stable, non-toxic, easy to handle and commercially available or easy to prepare [1,2,3,4,5,6,7,8]. During the last decade, noteworthy improvement in the synthesis and use of diaryliodonium salts has been reported [9,10,11,12,13,14,15,16,17,18,19,20,21]. Owing to their electron-deficient nature at the iodine center and to the excellent leaving-group ability of the iodoarene, diaryliodonium salts are frequently employed as aromatic electrophiles in aryl transfer processes [22,23,24,25,26,27,28,29,30,31,32,33,34,35,36,37,38]. Seminal contributions from the Pike, Olofsson, Kita and Stuart groups highlighted the efficiency and the selectivity of this aforementioned reaction. Diaryliodonium salts appear as fairly appealing electrophilic arylating reagents as well as precursors for positron emission tomography (PET) [39,40]. They are powerful intermediates for the synthesis of a broad range of radiofluorinated synthons and clinically relevant PET tracers [41,42,43,44,45,46,47,48,49,50,51,52,53,54,55,56]. Since the pioneering works on the palladium- and copper-catalyzed arylation of sp2 C–H indoles reported respectively by Sanford [57] and Gaunt groups [58], N– and C–arylation involving diaryliodonium salts offer a highly complementary strategy for the synthesis and derivatization of heteroarenes (Scheme 1). Indeed, several methodologies have been developed for carbon and heteroatom arylations in the presence of acyclic diaryliodonium salts.
The synthesis of bis-arylated compounds from this late-stage functionalization strategy represents an appealing approach, notably in drug discovery, and provides more options for the incorporation of structural diversity into heterocycles having several C–H bonds [59]. In most intermolecular iodonium arylation reactions to date, a symmetric aryliodonium salt or a non-symmetric bearing a hyper nucleofuge (“dummy” group) such as TMB (2,4,6-trimethoxyphenyl), Mes (2,4,6-methylphenyl) or TRIP (2,4,6-triisopropylphenyl) was used as a coupling partner liberating the aryliodide as a by-product. Sparse examples of attractive tandem/domino C–H and N–H reactions, avoiding waste, have also been reported. Here we focused on recent developments in metal-catalyzed Csp2- and N–arylation of heteroarenes using acyclic diaryliodonium salts as coupling partners over the past 10 years. Mechanism details, usually involving “high-valent” organometallic palladium, copper or iridium intermediates, are given when they are discussed by the authors but are not fully covered here.

The first iridium(III)-catalyzed arylation using diaryliodonium salts was reported by Hong in 2015 [79]. The authors reported the C8 site-selective arylation of isoquinolone using symmetrical diaryliodonium tetrafluoroborates in the presence of [IrCp*Cl2]2 and AgSbF6 as a ligand in AcOH at 100 °C for 24 h (Scheme 26a). The introduction of a phenyl bearing an electron-poor or electron-donating substituent did not affect the reaction efficiency and the corresponding C8-arylated isoquinolone derivatives were obtained in yields ranging from 57% to 93%. Thiophene could also be readily introduced at C8 with 67% yield. C8 arylations proceeded through a chelation between the oxygene atom on the pyridinone and the electron-deficient Ir(III) center leading to an iridacycle complex, followed by its oxidation by the hypervalent iodine reagent to afford highly oxidated aryl-Ir(V) intermediate (Scheme 26b).
Yuan then described one example of Cp*Ir(III)-catalyzed C2–H arylation of 1-(pyrimidin-2-yl)-1H-indole with diphenyliodonium triflate as a coupling partner [97]. The role of pyrimidine as a directing group appears to be crucial for promoting the C2–indole irradiation by coordination to the Ir(III) species. The reaction was performed using a low catalyst loading, AgNTf2 as a ligand in the presence of pivaloic acid and a 4 Å molecular sieve as a key additive for the efficiency of the phenylation reaction (Scheme 27).
Of the widely reported metal-catalyzed C–H arylation, much less research has dealt with diaryliodonium salts acting as sources for aryl radicals. From this point of view, photoredox chemistry involving radical intermediates is discussed here. Since the breakdown of Sanford in 2012 who reported a photoredox palladium/iridium-catalyzed C–H arylation with diaryliodonium reagents under mild conditions [98], support for the feasibility of these photocatalytic reactions with heteroarenes is provided by few reports [99,100,101,102,103,104]. Room-temperature, visible-light photocatalysis-promoted transformations of diaryliodonium salts were described by Chatani in 2013 [99]. The arylations were performed at room temperature under visible-light irradiation provided by a white LED light (λ = 400–700 nm) in the presence of [Ir(ppy)2(bpy)]PF6 (ppy: 2-phenylpyridine, bpy: 2,2’-bipyridine) to generate aryl radicals from diaryliodonium salts. Under these optimized conditions, electron-deficient heteroarenes such as pyridine and diazines as well as electron-rich heteroarenes were successfully arylated using symmetrical diaryliodonium salts (Scheme 28). The main limitations of this strategy are the required large excess of heteroarene used as a solvent and the lack of regioselectivity. It is also noteworthy that this exquisite visible-light-mediated arylation can be realized in the absence of a photocatalyst with pyrrole via a colored charge-transfer complex.
Visible-light-promoted arylation usually proceeds by a SET (single electron transfer) reaction from a photoexcited catalyst, to give the aryl radical intermediate which is selectively added to the heteroarene to generate radical intermediate, which leads to a cationic intermediate through another SET reaction and a regenerated photocatalyst. Finally, the cationic intermediate losses one proton to give the desired arylated products.
Visible-light-promoted Ir(III)-photoredox catalysis for C3–selective direct arylation of 2-pyridones at ambient temperature using diaryliodoniums was reported by Miura and Hirano as an elegant eco-friendly and safe process [101]. The screening of the reaction conditions has shown that both visible light and the Ir(ppy)3 catalyst were crucial for the reaction efficiency. The selective C3 arylations of 2-pyridinone derivatives were performed in the presence of KOAc in CH3CN at room temperature with symmetrical diaryliodonium or unsymmetrical aryl(mesityl)iodonium triflates (Scheme 29a). Even if the dummy group was not transferred, the yields were still lower with unsymmetrical diaryliodanes. The authors suggested a single electron transfer (SET) from the active photoexcited *Ir(III) species to the diaryliodonium salts providing the formation of the aryl radical and an Ir(IV) complex (Scheme 29b). Its subsequent addition to the pyridinone produces the allylic radical intermediate which is prone to oxidation by Ir(IV), generating both the cationic intermediate and the Ir(III) photocatalyst. The final deprotonation led to the expected 3-aryl-2-pyridinones. Under this photoredox catalysis, pyridinones bearing an electron-donating substituent led to poor yield of the corresponding C3–phenylated compound maybe because of the SOMO/LUMO interaction between nucleophilic phenyl radical and the π-deficient heterocycle.

Atom-economical strategies using hypervalent iodanes through domino or tandem processes represent an extremely attractive approach to avoid the waste of aryl iodide side-product [35,36]. The development of cascade reactions allowing the multiple formation of bonds starting from simple substrates in a single transformation consisting of at least two steps is a fairly appealing issue. In this context, sustainable processes have been developed such as tandem reactions involving a second step that enables the capture of the in-situ-generated aryl iodide side-compound. Even if tandem reactions including various sequences combining oxidation reactions or nucleophilic additions are widespread [130], tandem catalytic couplings on heteroarenes are really sparse and still remain a great challenge. Although decarboxylative cross-coupling reactions are not covered in this review, it is worth mentioning two recent reports from the group of Zhang who reported the tandem π-extended decarboxylative annulation [131,132]. Significant achievements have been reported by Greaney in the last 5 years, who was the first to describe tandem N–/N–, C–/N– and N–/C– arylation starting from unprotected heteroarenes and acyclic diaryliodoniums [133]. In 2015, Greaney and co-workers conducted a sequential diversification approach on indoles with symmetrical and unsymmetrical diaryliodonium triflates [134]. This strategy enabled the rapid installation of various aryl substituents at C3 and N– positions without extra synthetic steps and contributed to structural diversification. In order to merge both the CH and NH arylation processes, the reaction proceeded using copper iodide as a catalyst in dioxane as universal solvent in the presence of a stoichiometric amount of symmetrical diaryliodonium triflates. Using stepwise addition of bases and ligand to complete one-pot sequential arylation reactions, 1,3-bisarylated indoles were isolated in good yields ranging from 41% to 67% (Scheme 39). The successful tandem arylation was also extended to aryl-uracil iodonium triflates by switching the solvent to toluene and reducing the reaction temperature of the second step. Under these optimized conditions, a range of N–dimethyluracil-3-arylindoles were synthetized in moderate yields along with small amounts of C3–arylated products.
Inspired by their first strategy for synthesis of indoles, a similar very powerful domino process using N–heterocycles was published by the same group in 2017 [135]. Notwithstanding the importance of multiaryl-substituted pyrazoles, the sequential N–H/C–H direct arylation approach based on readily available unsubstituted pyrazoles constituted an attractive choice for the one-pot synthesis of these privileged motifs [136]. Nevertheless, the strategy was slightly different from the former one since the second arylation took place on the introduced aryl group instead of the pyrazole core that acted as a directing group for subsequent ortho C–H arylation. The first metal-free N-arylation serves as a stepping stone on the way to the ruthenium-catalyzed C–H arylation of generated N–arylpyrazole derivatives (Scheme 40). The selective C–H mono-arylation was reached using cumbersome pyrazoles or diaryliodonium salts over competing the diarylated products. Treatment of pyrazole derivatives or triazole with unsymmetrical diaryliodonium triflates led to the diarylated compounds with excellent selectivity exhibiting a noteworthy steric and electronic differentiation.
A similar powerful domino process using N–heterocycles was recently published by Kong and Li who focused their interest on developing straightforward methods to prepare polyarylated imidazoles via copper-catalyzed domino di/tri-arylation [137]. The main feature was the formation of imidazolium salts also recycling the residual counter anion of the diaryliodoniums thus providing a high atom-economical process. The domino reactions were carried out using N–alkyl or N–aryl-imidazoles or benzimidazoles in the presence of one equivalent of basic Cu2O in DMF at 120 °C for 20 h (Scheme 41a). In addition, an excellent selectivity was observed with unsymmetrical diaryliodonium salts as coupling partners, where less sterically hindered aryls transferred first. Their attention turned finally to investigating how they might steer the reaction to produce pentaaryl imidazolium salts from simple unprotected azoles and diaryliodonium tetrafluoroborates. Driven by the design of new challenging polyarylimidazoliums, a rewarding domino triarylation including N-arylation, N–quaternarization and C–arylation was developed in one pot (Scheme 41b).

Late-stage C–H or N–H arylation of heteroarenes is a powerful tool for incorporating some diversification into these highly valuable scaffolds, especially in drug discovery. The striking feature of air- and moisture-stable diaryliodonium salts is their ability to facilitate metal-catalyzed C–H functionalization. The use of diaryliodonium salts as versatile N– or C–arylating reagents provides rapid and streamlined access to various analogues of relevant heteroaryl compounds. Many reactions were conducted under mild conditions at room temperature or were not water and air sensitive. Homogeneous and heterogeneous catalytic systems have been developed during the last decade to improve both the efficiency and the scope of the reaction. The main drawback with diaryliodonium salts is the formation of a stoichiometric amount of aryl iodide as a waste, which is undesirable from atom-efficiency points of view. This disadvantage is overcome by recent advances in exquisite tandem or domino arylation reactions providing a straightforward eco-friendly strategy by recycling waste.

Financial support from the Région Normadie (RIN100 Program) is gratefully acknowledged for the doctoral fellowship to A.P.-B.; T.B. and C.F. thank the Université de Rouen-Normandie (UNIROUEN) for its support.

The authors declare no conflict of interest. The funders had no role in the writing of the manuscript. 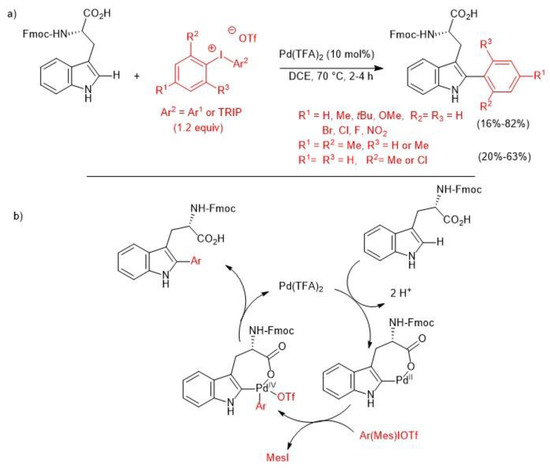 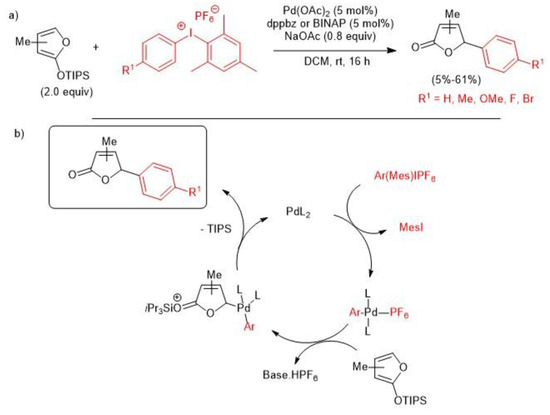 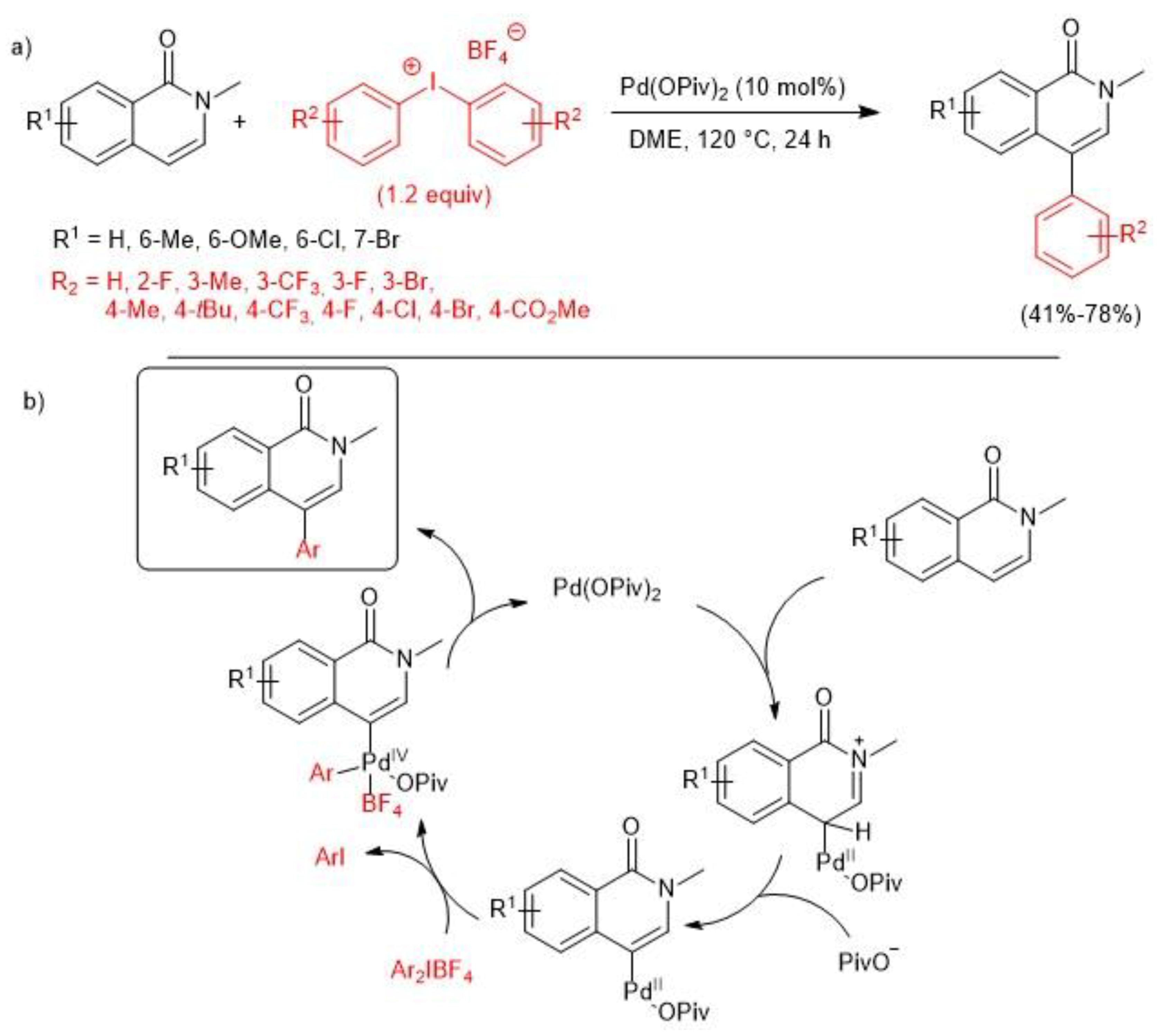 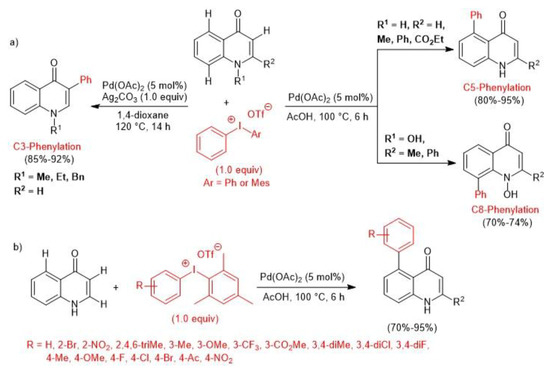 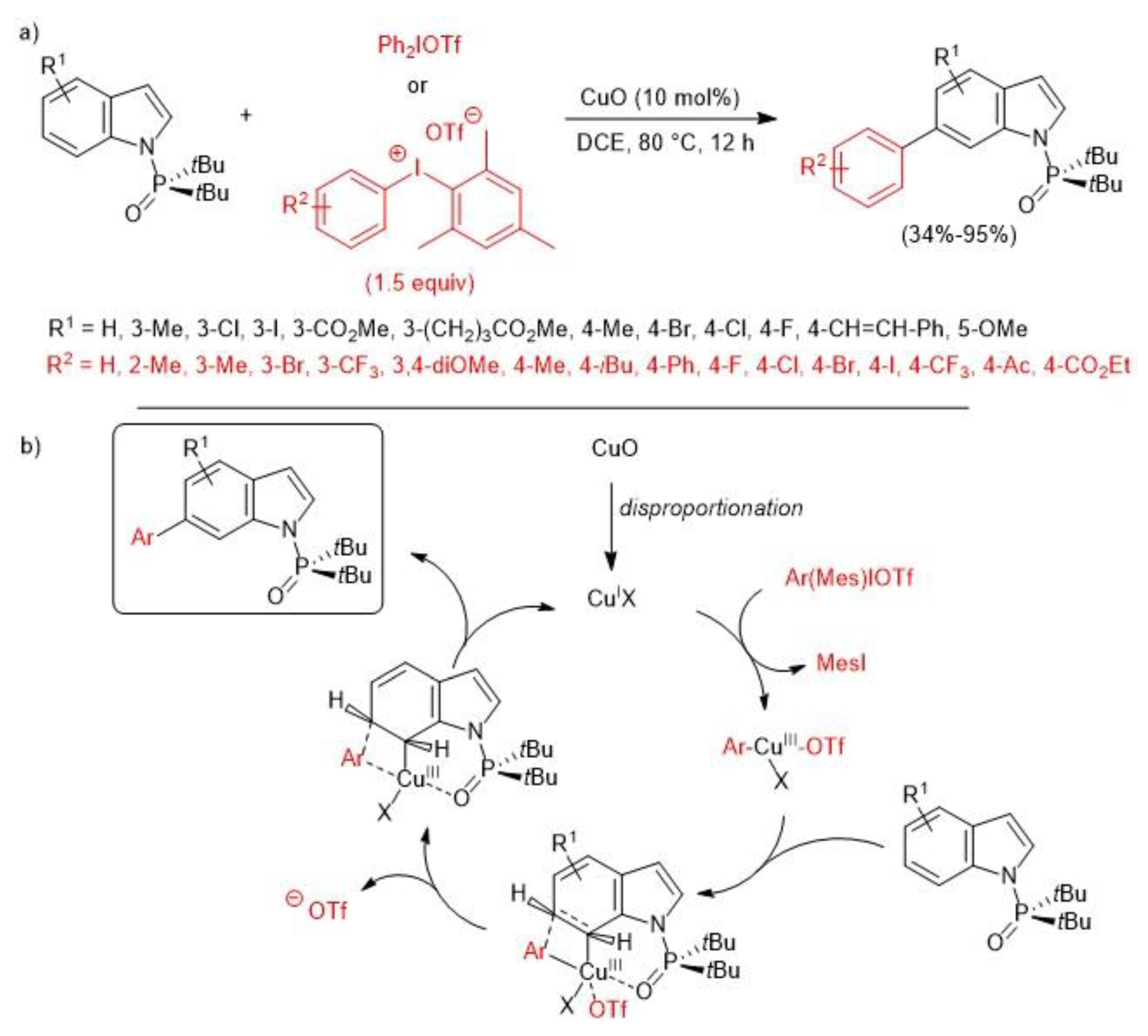 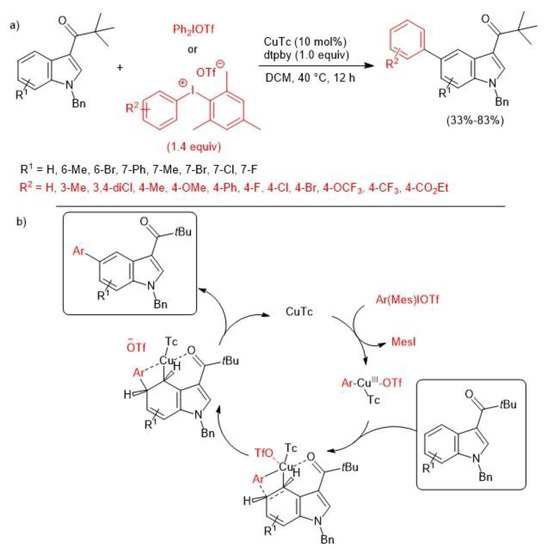 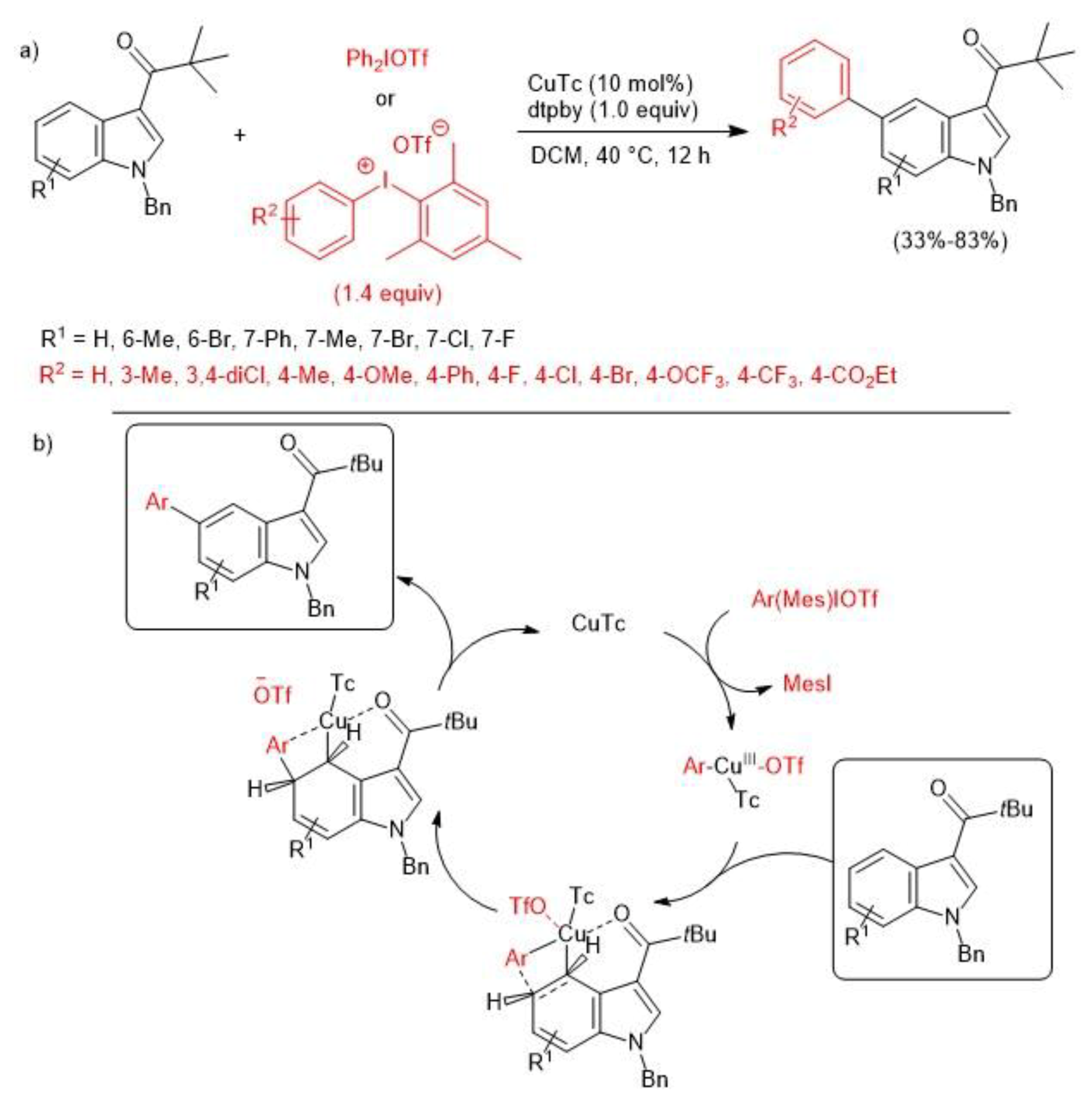 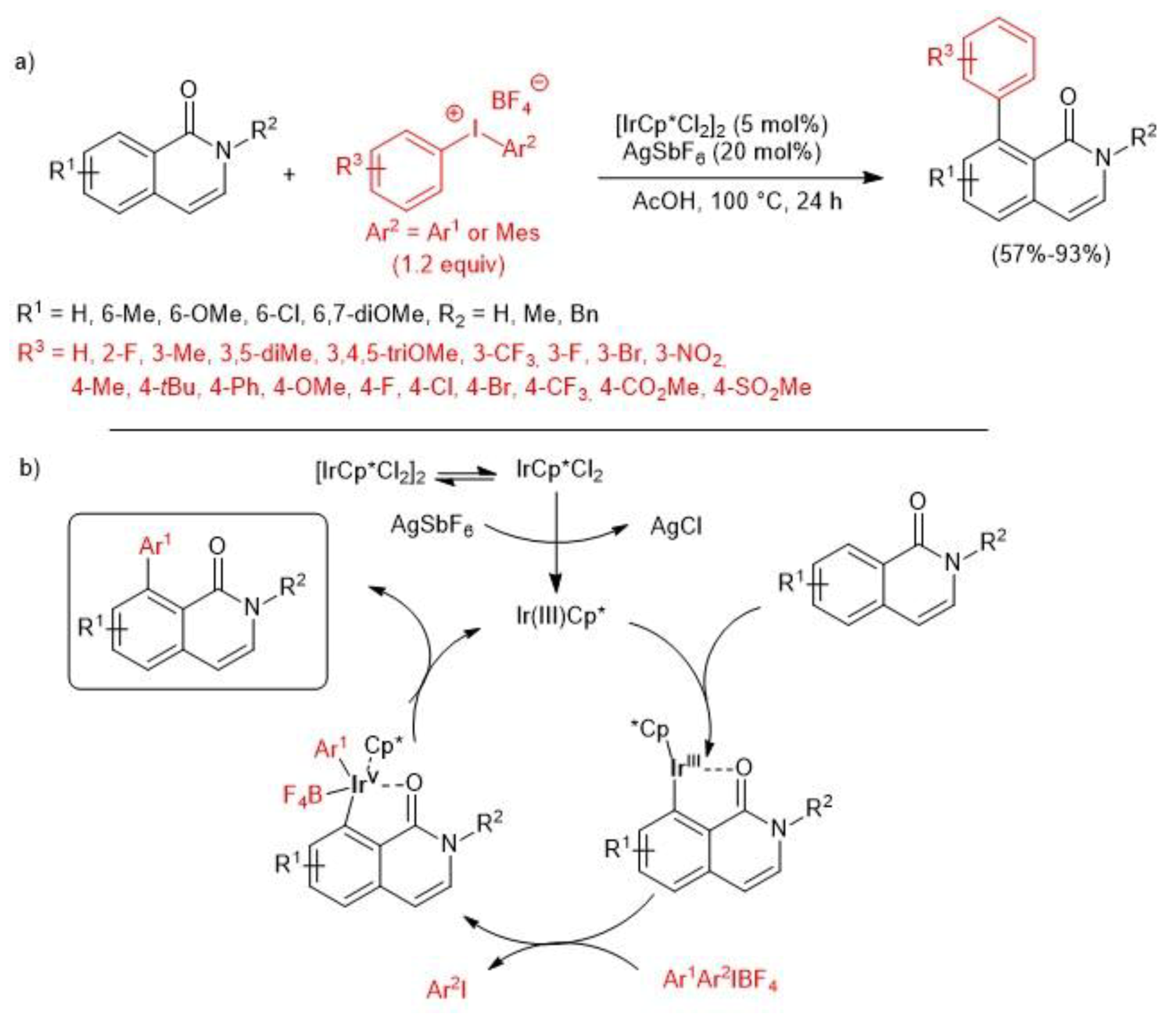 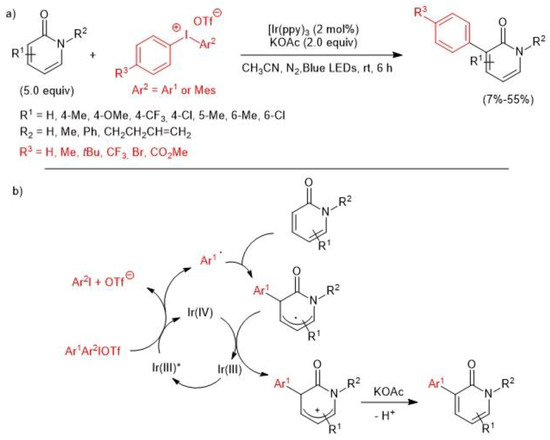 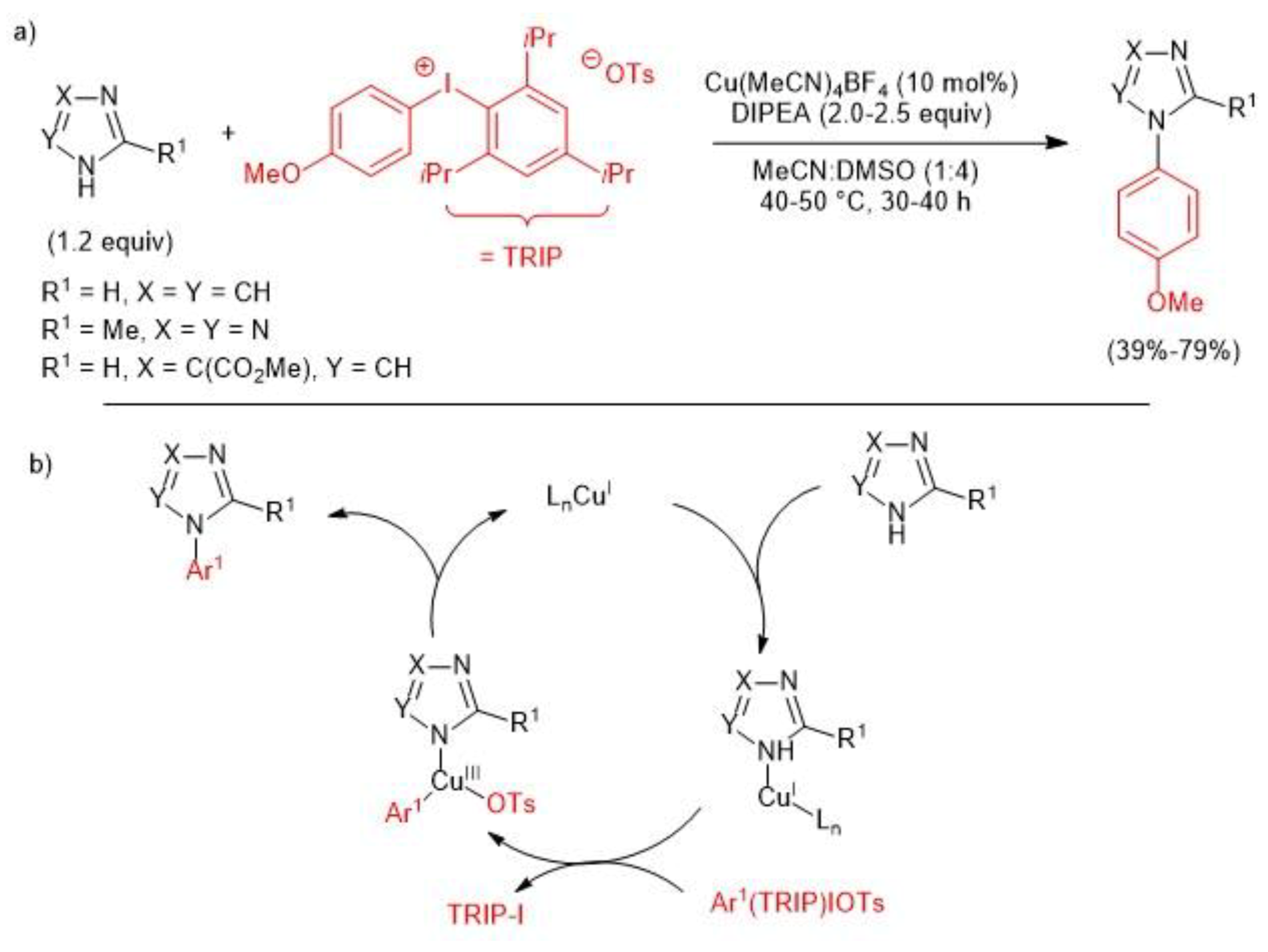 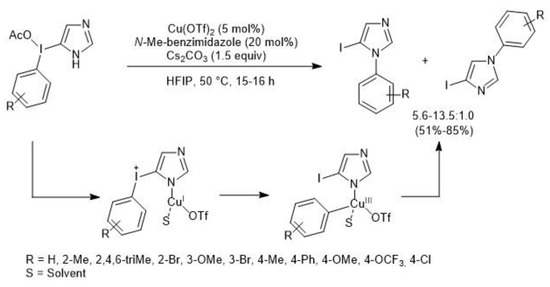 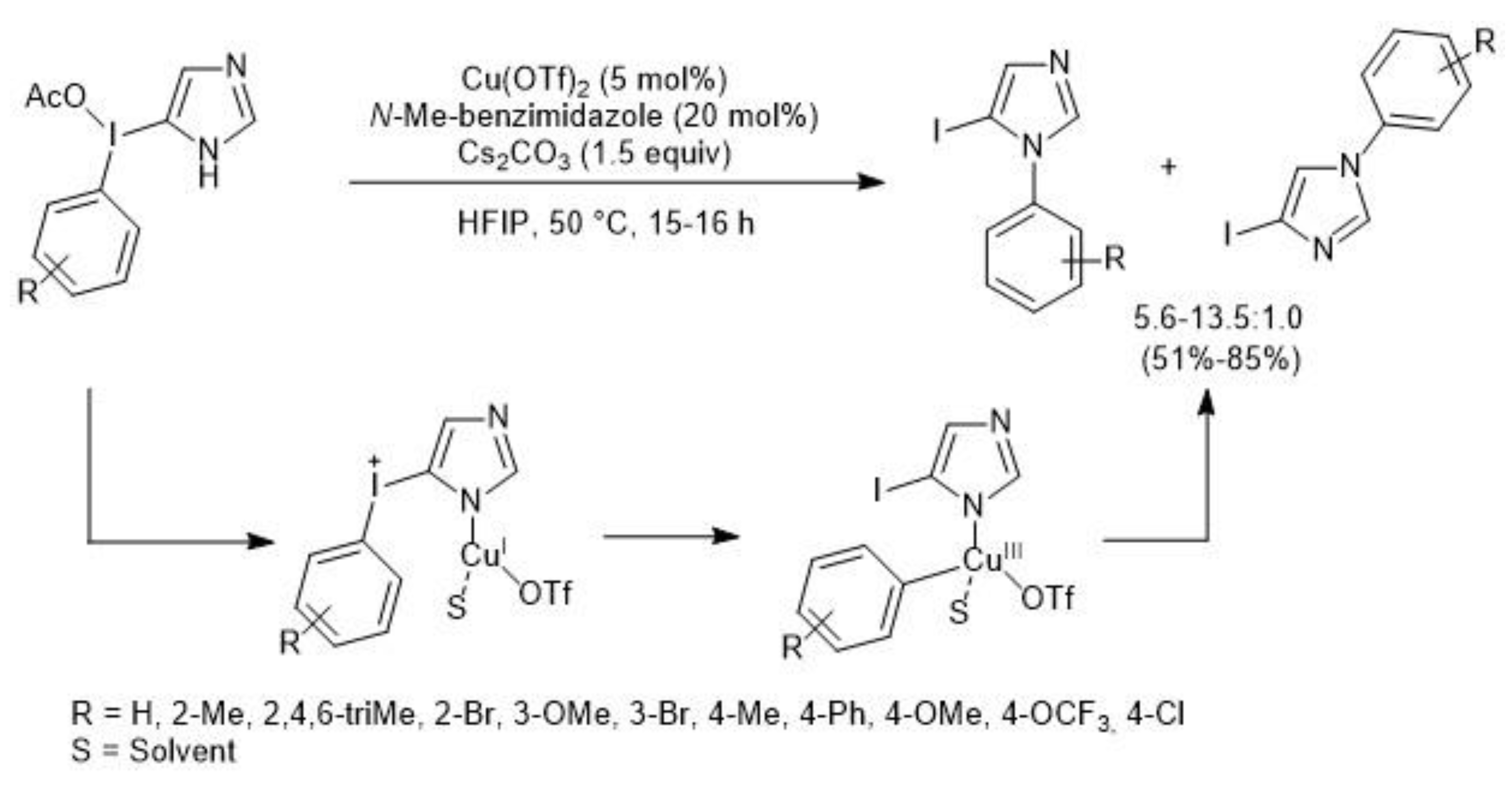 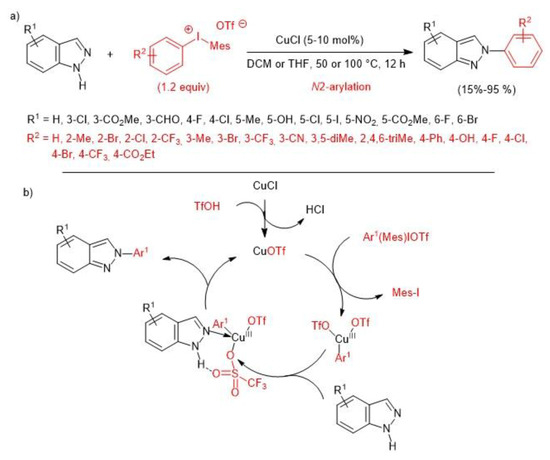 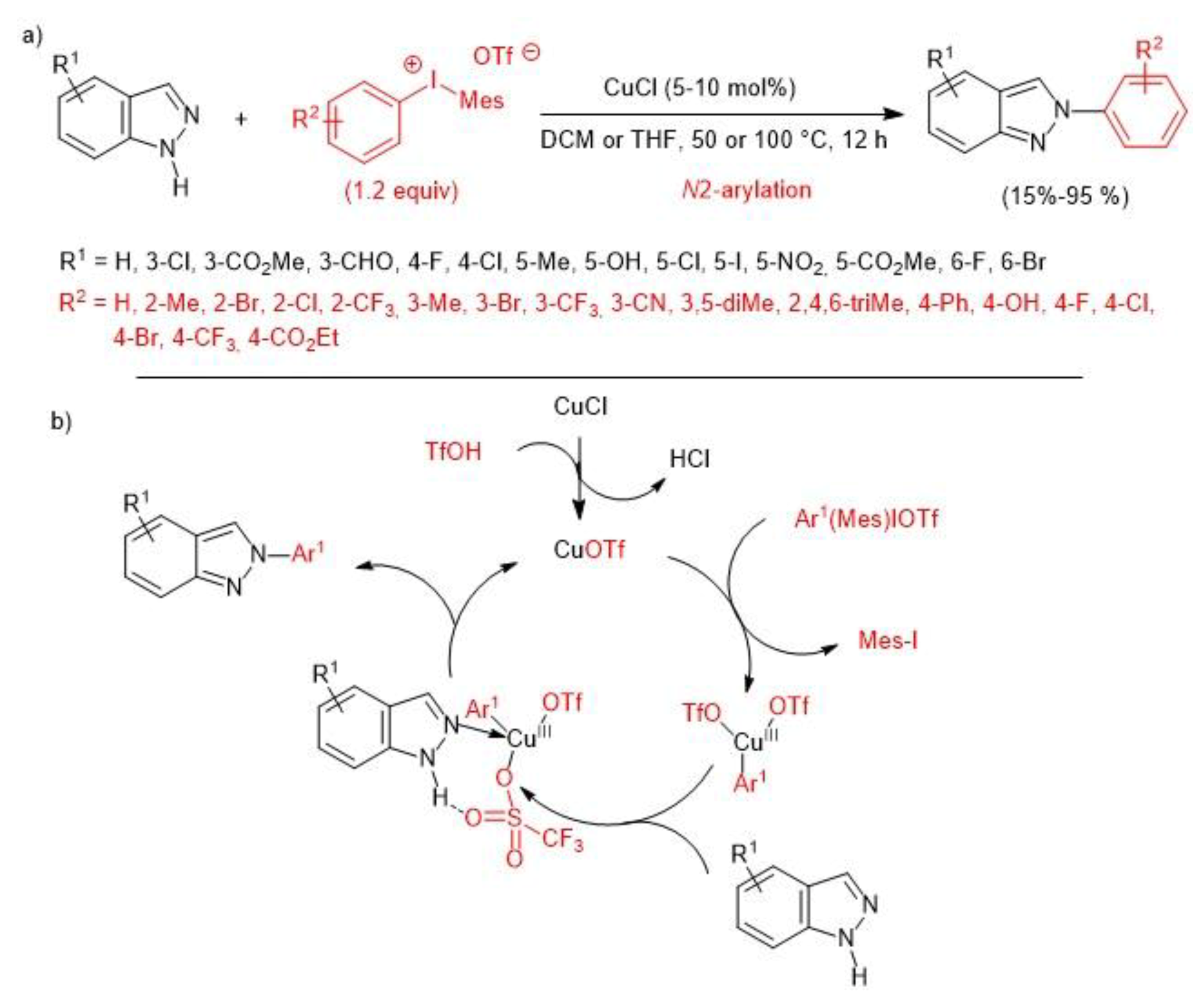 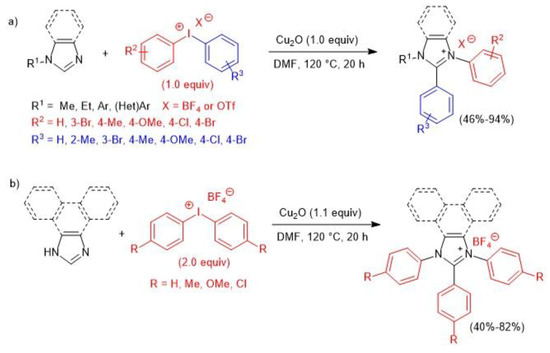