Application of liquid organic hydrogen carriers, such as “methylcyclohexane (MCH)–toluene” chemical couple, is one of the promising approaches for hydrogen storage and transportation. In the present study, copper-modified nickel catalysts with high metal loading of 75 wt% were synthesized via heterophase sol–gel technique, and investigated in the dehydrogenation of MCH. Two approaches towards the copper introduction were applied. The catalyst samples prepared via wetness impregnation of the nickel sol–gel catalyst are characterized by more effective Ni-Cu interaction compared to those where two metals were introduced simultaneously by the mixing of their solid precursors. As a result, the “impregnated” catalysts revealed higher selectivity towards toluene. The addition of copper up to 30 wt% of total metal content was shown to increase significantly toluene selectivity and yield without a noticeable decrease in MCH conversion. The catalyst with the active component including 80 wt% of Ni and 20 wt% of Cu demonstrated 96% and 89% toluene selectivity at 40% and 80% MCH conversion, respectively. Based on the obtained data, this non-noble catalytic system appears quite promising for the MCH dehydrogenation. View Full-Text
Keywords: dehydrogenation; methylcyclohexane; NiCu catalyst; LOHCs dehydrogenation; methylcyclohexane; NiCu catalyst; LOHCs
►▼ Show Figures 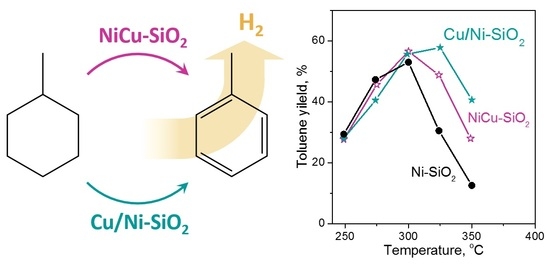