Molecular Targets of Triple-Negative Breast Cancer: Where Do We Stand?

Dissection of the MKK3 Functions in Human Cancer: A Double-Edged Sword?

Cancer target therapy urges the identification of novel molecular players to design novel strategies to improve the treatment outcomes by reducing the doses of conventional chemotherapy and preserving the effectiveness of the therapy. The Mitogen-activated protein kinase kinase 3 (MKK3) is an evolutionarily conserved protein kinase involved in the regulation of a plethora of cellular processes, however being not frequently mutated in human cancer the consequences of its dysregulation in gene expression or protein activity in cancer is controversial. With the aim to define a clear overview of MKK3 contribution in cancer a systematic search of recent literature focusing on MKK3 dissected functions was performed. The results revealed that the oncogenic and tumor suppressive functions of MKK3 are closely dependent on the tumor type, thus suggesting MKK3 as new putative molecular target to be enrolled for the design of more efficient anticancer therapeutic approaches for specific type of tumors contributing to add new avenues to be pursued to implement the effectiveness of precision medicine.

The role played by MKK3 in human cancer is controversial. MKK3 is an evolutionarily conserved protein kinase that activates in response to a variety of stimuli. Phosphorylates, specifically the p38MAPK family proteins, contribute to the regulation of a plethora of cellular processes such as proliferation, differentiation, apoptosis, invasion, and cell migration. Genes in carcinogenesis are classified as oncogenes and tumor suppressors; however, a clear distinction is not always easily made as it depends on the cell context and tissue specificity. The aim of this study is the examination of the potential contribution of MKK3 in cancer through a systematic analysis of the recent literature. The overall results reveal a complex scenario of MKK3′s involvement in cancer. The oncogenic functions of MKK3 were univocally documented in several solid tumors, such as colorectal, prostate cancer, and melanoma, while its tumor-suppressing functions were described in glioblastoma and gastric cancer. Furthermore, a dual role of MKK3 as an oncogene as well as tumor a suppressor has been described in breast, cervical, ovarian, liver, esophageal, and lung cancer. However, overall, more evidence points to its role as an oncogene in these diseases. This review indicates that the oncogenic and tumor-suppressing roles of MKK3 are strictly dependent on the tumor type and further suggests that MKK3 could represent an efficient putative molecular target that requires contextualization within a specific tumor type in order to adequately evaluate its potential effectiveness in designing novel anticancer therapies. View Full-Text
Keywords: MKK3; p38 MAPK; oncogene; tumor suppressor; cancer; therapeutic treatments; target therapy MKK3; p38 MAPK; oncogene; tumor suppressor; cancer; therapeutic treatments; target therapy
►▼ Show Figures 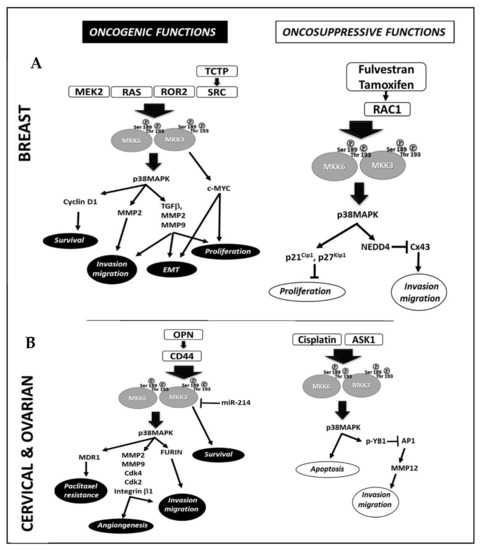