The distinct molecular and biological properties of exosomes, together with their abundance and stability, make them an ideal target in liquid biopsies for early diagnosis and disease monitoring. On the other hand, in recent years, nanomaterial-based optical biosensors have been extensively investigated as novel, rapid and sensitive tools for exosome detection and discrimination. The scope of this review is to summarize and coherently discussed the diverse applications, challenges and limitations of nanosensors based on surface-enhanced Raman spectroscopy (SERS) as the optosensing technique.

In the impending decades, cancer is set to become a major cause of morbidity and mortality across all regions of the globe [1], with an estimated 13.2 million related deaths by 2030 [1,2]. Thus, the development of more effective treatments and, fundamentally, new forms of prevention and early diagnosis are both necessary strategies to achieve a cure [3]. In fact, diagnosis at the very earliest stages improves cancer outcomes by prompting treatments aimed at preventing the disease development to incurable stages.
The prevailing theory about the origin of cancer indicates that a primary tumor develops for a long time, from a subclinical or microscopic level, before it spreads at distance (metastasis) [4]. To be clinically detectable, a tumor must reach a size of ca. 1 cm3, which approximatively contain 109 cells [5]. Therefore, at the time of diagnosis, there is a high probability of prior dissemination. As a result, there is an urgent need for new technologies capable of detecting the presence of tumor cells before the disease emerges as clinically visible. In this regard, exosome-based liquid biopsy in peripheral blood and other body fluids is among the most promising techniques for pre-metastatic cancer diagnosis [6]. The validity of such an approach builds upon the current concept and understanding of metastasis [7,8,9,10,11]. Indeed, it has been recognized that before they spread to distant sites, the original or primary tumors “communicate” with cells and tissues of other organs, as well as their surrounding environment, to prepare what will be eventually a metastatic niche. This horizontal intercellular communication takes place through exosomes. In bone-marrow [7], for example, hematopoietic progenitor cells that express VEGFR1 are located in tumor premetastatic sites and form cellular clusters induced by exosomes originated in primary tumor cells. In these niches, such cells express VLA4 and certain integrins that facilitate the arrival of tumor cells, a process that is also mediated by exosomes [12]. On the other hand, by this communication, tumor stem cell deference can be induced from normal cells.
Exosomes were first described in the 1960s as vesicles related to coagulation processes derived from platelets and, two decades later, they were associated with enzymatic functions [13]. Subsequent observations showed that these vesicles were generated as cell desquamation in the reticulocyte maturation process [14]. Exosomes are small, single-membrane vesicles approximately between 30 and 150 nm diameter, secreted by practically all cells into the extracellular environment through the fusion of specific endosomes (multivesicular bodies, MVBs) with the plasma membrane. MVBs are formed by primary endosomes which are incorporated as “intraluminal vesicles” (ILV) via inward budding of the multivesicular body membrane [12]. They can follow this secretory pathway towards the extracellular environment or a degradative pathway through their fusion with lysosomes. Exosomes have been shown to intervene in multiple functions (e.g., immune response, healing, viral synthesis, antigenic presentation, etc.) [15,16]. In cancer, multiple functions have been attributed to exosome-mediated communication such as reprogramming of stromal cells, initiation of metastasis, preparation of metastatic niches, modelling of the immune response and extracellular matrix, drug resistance, antigen presentation, etc. [17]. Notably, such intercellular exosomal communication takes place in both directions: from tumor cell to normal cell and vice versa. Thus, tumor cells can gain capacities such as “invasiveness” or enhance their proliferative efficiency. An example of this reverse communication process has been observed for normal adipocytes, which secrete exosomes carrying proteins involved in the oxidation of fatty acids that are eventually incorporated into melanoma cells. Such process culminates in an increase of this function in malignant cells, which enhances their migration and invasion capabilities [18].
Exosome lumen and membrane carry biological and genetic information related to their parental cell types as they are selectively enriched of specific nucleic acids (e.g., mRNA, miRNA, tRNA, etc.), proteins (e.g., integrins, immunoglobulins, growth factors, cytoskeletal protein actin and tubulin, endosomal sorting complex required for transport ESCRT-related proteins, hsp90, hsp70, tetraspanin, major histocompatibility complex), lipids, metabolites and glycoconjugates (Figure 1) [19,20]. It is also worth stressing that the exosome biogenesis itself can significantly impact their composition and functionality [3]. In this sense, the most significant aspect is that exosome molecular composition is not a mere random replica of the original cell but is selected and specific. The overall mechanisms of such selection (sorting) are very complex and have been only recently being unveiled. In general terms, the integration of the molecular components into endosomes takes place selectively via recognition by specific sequences of nucleotides or peptides. This mechanism is similar to ubiquitination, a process that marks and selects proteins destined for endosomal degradation [21]. In this way, RNA molecules containing a specific sequence (EXOmotif) are recognized by certain proteins (hnRNPA2B1) that facilitate their entry into exosomes. These proteins also undergo an activation process through reactions known as sumoylation, which helps integration, or isegilation (incorporation of ISG15 into TSG101), which inhibits the generation of exosomes (or facilitates their elimination by fusion to lysosomes) [22,23]. As a result, characteristic miRNAs in exosomes nucleic acid cargoes, while not expressed in the corresponding healthy tissues, have been detected, for instance, in breast cancer [24] and lung adenocarcinoma [25], demonstrating their validity as unique disease markers. Similarly, exosome membrane protein composition has also shown to be correlated with the nature of the originating cell and the transformation events that have undergone [26,27], which also make them promising diagnostic biomarkers and therapeutic targets [26,27,28]. This is consistent with the central role played by surface membrane proteins of exosomes in malignant processes such as metastasis [29,30]. Moreover, glycans bound to surface proteins and outer lipids are also found onto the exosomal surfaces [19], and they have been reported to play an important biological role, among others, in the exosome uptake [31]. Overall, the unique distinct molecular and biological properties of exosomes, together with their abundance and stability, make them an ideal target in liquid biopsies not only for early diagnosis [6] but also for disease monitoring and, finally, an opportunity for cancer cure [32].

2. Isolation and Characterization of Exosomes

In this review, we summarized and coherently discussed the diverse applications of SERS in the analysis of exosomes, with a special focus on the more recent and promising advances. We have also progressively highlighted current key challenges and limitations, which can be broadly associated with either the general application of SERS in biosensing and clinical diagnostic or the specific nature of exosomes as the biological target. In the first case, the translation of SERS-based analytical tools into competitive, commercial devices still faces important practical obstacles such as the production of cost-effective, robust and efficient plasmonic substrates at a large scale. Similarly, the fabrication of affordable and portable Raman spectrometers for fast data acquisition is critical for lowering the cost while providing manageable equipment for routine analysis in the clinical setting. In this regard, the integration of SERS substrates and Raman components into multifunctional platforms (e.g., microfluidics) is also pivotal for automatization and efficient standardization of the measuring procedures. Furthermore, as also stressed in the review, the efficient implementation of the most advanced chemometric tools appears to be the way to fully access the multidimensional information contained in large SERS data set. On the other hand, the intrinsic nature of these vesicles makes exosome-based diagnostics a difficult task, mainly due to their pronounced molecular heterogeneity and the requirement of determining the presence and relative distribution of different sub-populations, especially in complex biofluids. As pointed out, both improvement and standardization of the isolation procedures are needed to reproducibly supply exosomes with high purity in good yields, while identification of a much broader set of potential biomarkers is mandatory for enabling clinical applications. 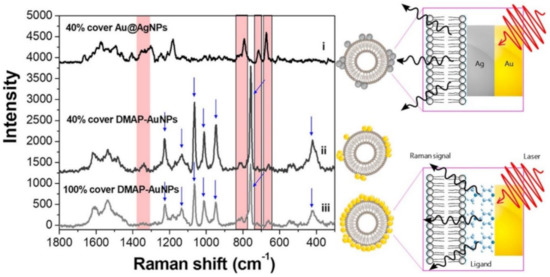 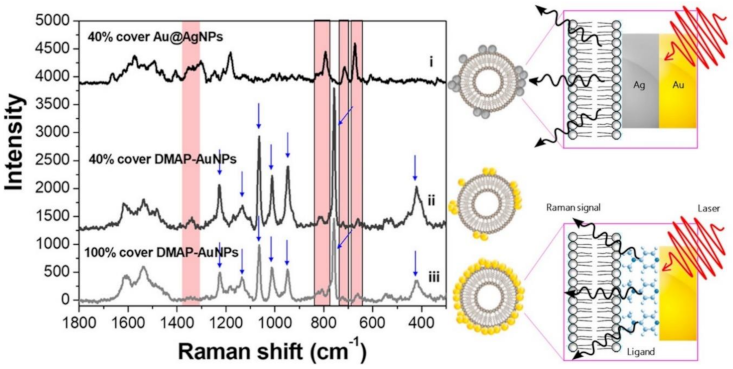 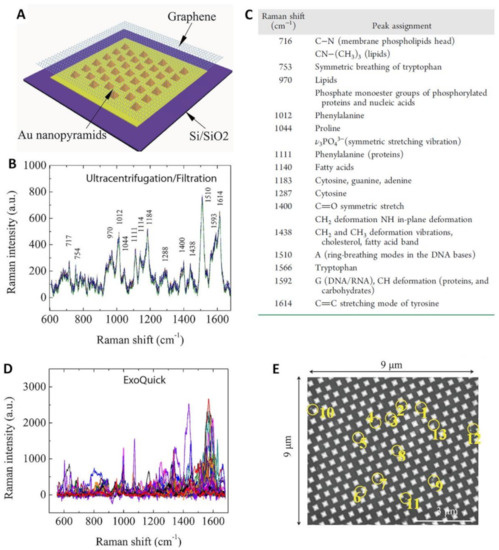 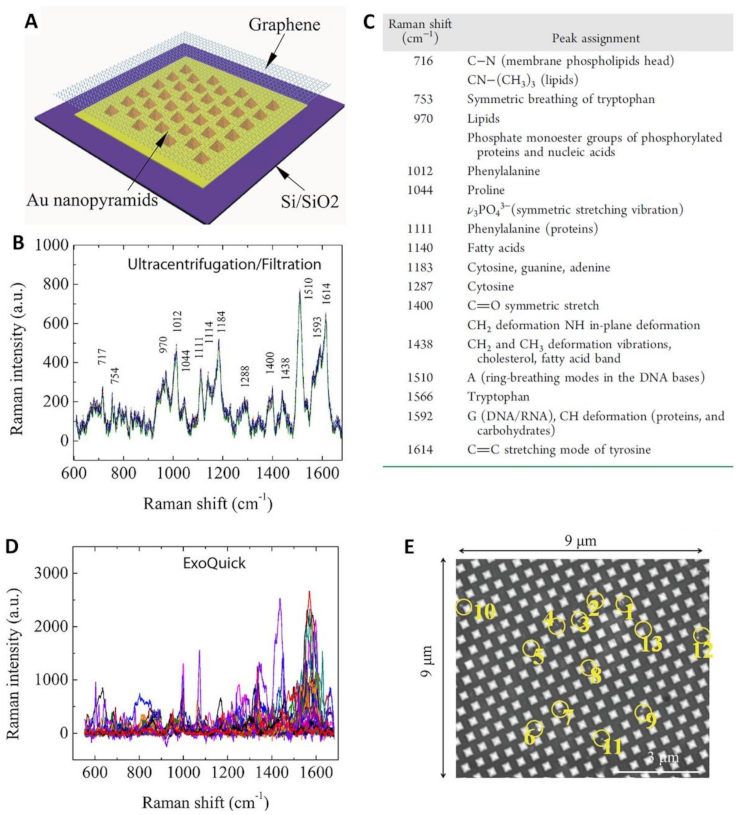 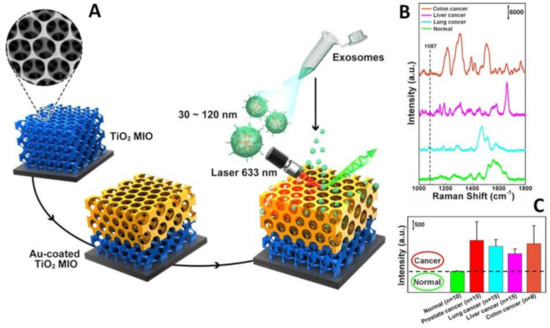 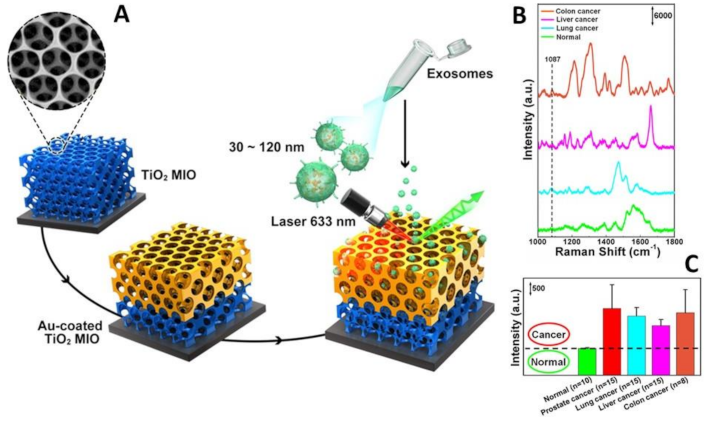 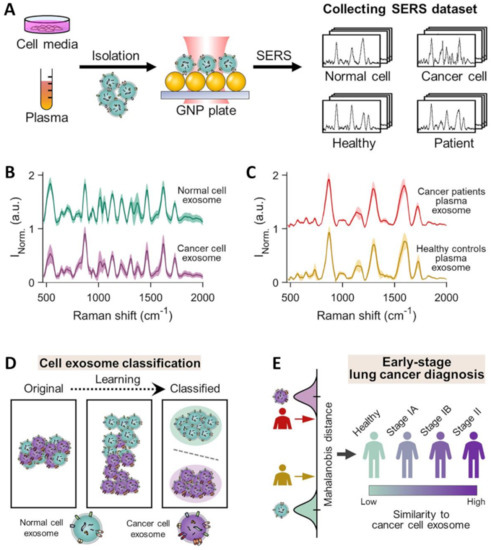 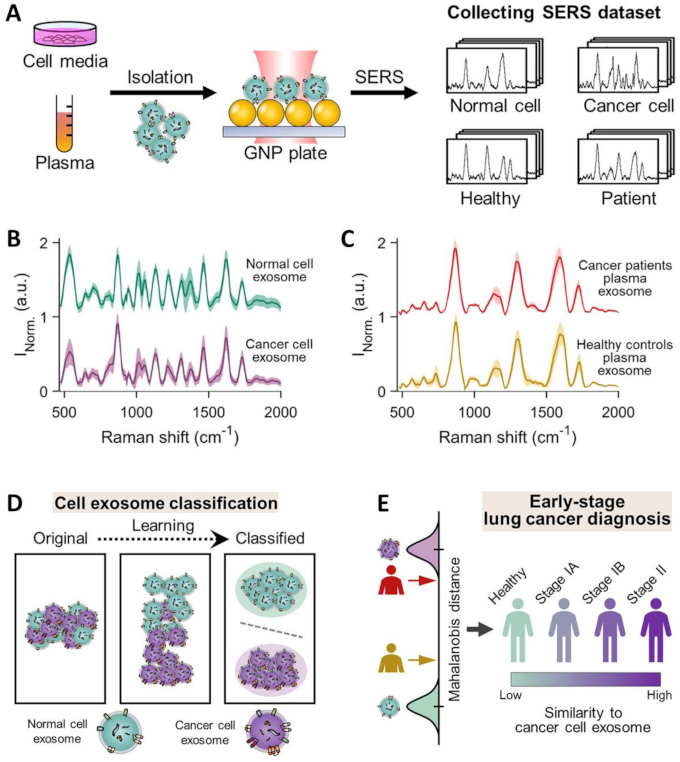 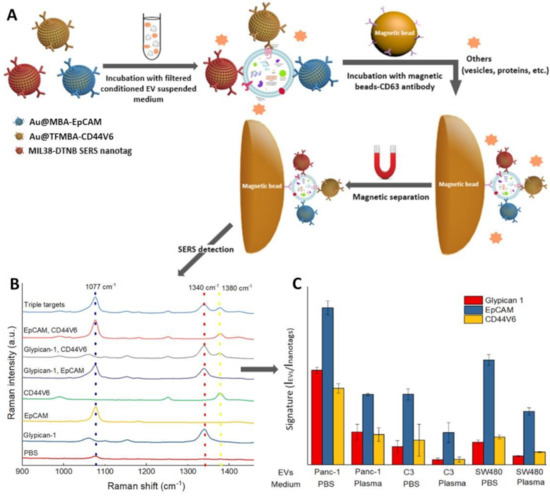 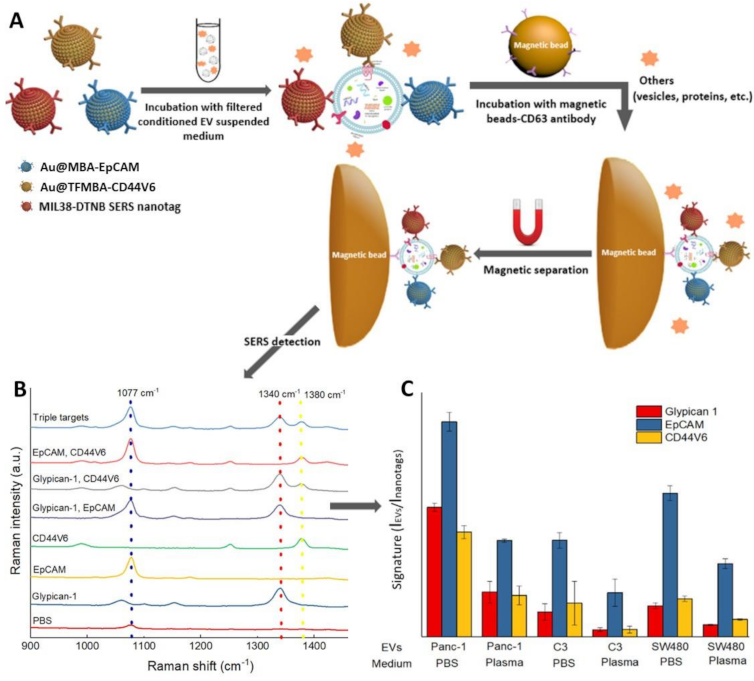 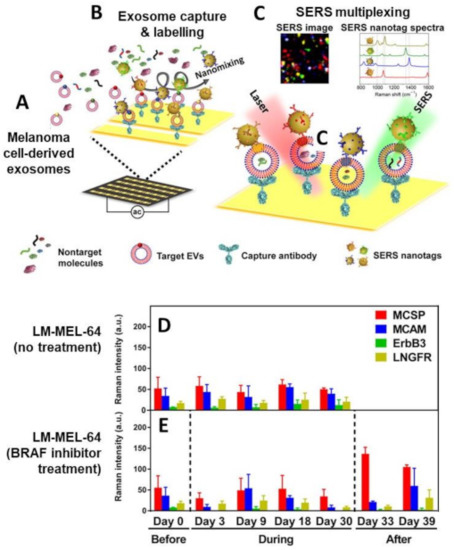 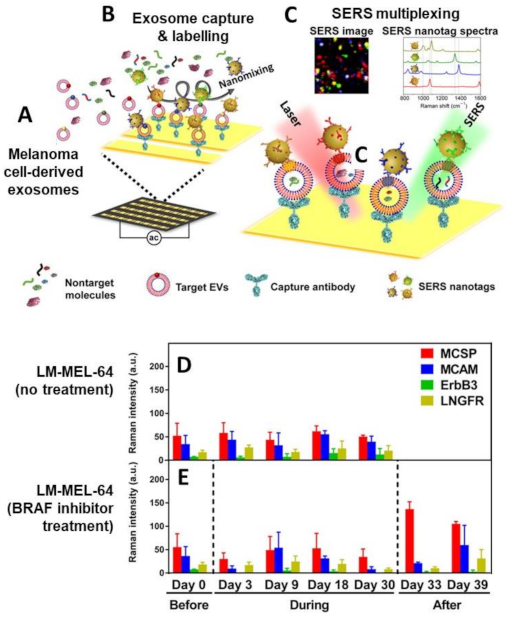