Treatment of oropharynx cancers usually requires radiation, chemotherapy, surgery, or a combination of all three. Although these treatments are effective, they can cause both short- and long-term side effects, particularly when more than one treatment option is used. Robotic surgery is now an option for patients with oropharynx cancers, but it is not clear how many patients will require additional treatment with radiation, or combined chemotherapy and radiation, after surgical treatment. In this study we used a large national database of oropharynx cancer patients and found that two-thirds of patients who were treated with robotic surgery required radiation therapy and one-third required chemotherapy with radiation. In addition, we found that the true tumor stage of the patients in this study was often higher than was initially thought prior to surgery. Finally, patients treated at high volume surgical centers were more likely to have more of their tumor removed compared to those at low volume facilities. Better survival quality of oropharynx cancer patients could be achieved by improving pre-surgical selection of patients so that the number of treatment modalities is reduced.

Trans-oral robotic surgery (TORS) has emerged as an important surgical treatment option in the management of human papillomavirus (HPV)-positive and -negative oropharynx cancer. However, treatment selection is paramount to ensure that patients will not require multimodality adjuvant therapy. In this study, we determined predictors of adjuvant therapy in TORS-treated patients. The National Cancer Database (NCDB) was used to identify patients with newly diagnosed clinical T1-T4, N0-N3 oropharyngeal squamous cell carcinoma who underwent TORS between 2010–2016. Kaplan–Meier survival analysis was used to estimate overall survival (OS). A total of 2999 patients were studied, and the five-year OS for the entire cohort was 82.5%, and for HPV-positive and -negative cohorts it was 88.3% and 67.9%, respectively (p < 0.001). Among all patients treated with TORS, 35.1% of patients received no additional treatment, 33.5% received adjuvant radiation alone (RT), and 31.3% received adjuvant chemoradiation. The N stage was pathologically upstaged in 629 (20.9%) patients after TORS. Patients treated at higher-volume centers were more likely to have negative surgical margins (OR: 0.96, 95% CI: 0.94, 0.98, p < 0.001), but this did not influence the receipt of adjuvant therapy. The high rate of adjuvant multimodality treatment after TORS suggests a need for improved patient selection. Limitations of this study, including lack of data on loco-regional control, progression free survival, acute and late toxicities, and utilization of pretreatment PET/CT imaging, should be addressed in future studies.
Keywords: TORS; adjuvant therapy; radiation therapy; chemotherapy TORS; adjuvant therapy; radiation therapy; chemotherapy

The incidence of oropharynx cancers has steadily increased in the last decade, likely driven by a concomitant rise in the incidence of human papillomavirus (HPV)-associated oropharyngeal squamous cell carcinoma (OPSCC) [1]. Several landmark studies have demonstrated superior survival outcomes for HPV-associated OPSCC compared to tobacco- and alcohol-driven OPSCC [2,3]. As outcomes continue to improve in OPSCC, de-intensification of treatment has emerged as an attractive strategy in this favorable subset of patients. Several prospective trials over the last decade have assessed de-escalation of radiotherapy (RT) dose in both the definitive and adjuvant settings. TransOral Robotic Surgery (TORS) is a promising, minimally invasive surgical strategy for treatment de-intensification in the management of OPSCC. Recent studies have shown excellent quality-of-life, functional, and oncologic outcomes in patients treated with TORS [4,5]. The primary concern regarding the use of TORS in OPSCC is appropriate patient selection to avoid multimodality therapy, which may result in increased toxicity. Previously, we demonstrated excellent overall survival (OS), but high rates of adjuvant therapy for patients undergoing TORS for T1-T2, N0-N2b OPSCC treated between 2010–2014 [6]. As data from prospective de-escalation trials emerge, we hypothesize that better patient selection should translate into a reduction in the need for adjuvant therapy after TORS. The objective of this study was to address the impact of institutional volume and patient selection on the need for adjuvant therapy in TORS-treated patients.

The use of TORS increased 292% between 2010 and 2016, from 208 patients in 2010 to 608 patients in 2016 (Figure 4A). Among all patients treated with TORS, 35.1% of patients received no additional treatment, 33.5% required adjuvant RT, and 31.3% required adjuvant chemoradiation (chemoRT) (Table 1). Among patients who were clinical (c) T1-2, N0-1, 714 (53.1%) received no additional therapy, 398 (29.1%) underwent adjuvant RT, and 243 (17.8%) required adjuvant chemoRT. For patients who were T3-T4, N2-N3, 14 (12.3%) received no additional treatment (reasons for omission of treatment are not provided in NCDB), 38 (33.3%) underwent adjuvant RT, and 62 (54.4%) patients received adjuvant chemoRT. The proportion of TORS patients who received no additional treatment and adjuvant RT alone increased from 2010 to 2016, while the proportion of patients who received adjuvant chemoRT decreased in that same time period (Figure 4B). The proportion of patients with T1/T2, N0/N1 disease who did not receive any additional treatment increased from 2010-2016, while the proportion of patients who received adjuvant RT who had T1/T2, N2/N3 disease increased over the same time period (Figure 4C). Interestingly, the proportion of patients who received adjuvant chemoradiation who were T3/T4, N0/N1 and T3/T4, N2/N3 sharply decreased from 2010–2016 (Figure 4C).
Patients treated with TORS at higher-volume centers were less likely to have positive margins (Odds Ratio (OR): 0.96, 95% CI: 0.94, 0.98, p < 0.001) compared to those treated at a low-volume center. For every one patient increase in mean volume, we expect to see a 4% decrease in the odds of a positive margin. The relationship between mean volume of cases and center frequency is shown in Figure S1. There was no relationship between center volume and the receipt of adjuvant therapy (OR: 1.01, 95% CI: 0.99, 1.03, p = 0.242).
We identified clinical, pathologic, and socioeconomic predictors for use of adjuvant therapy in TORS-treated patients. Adjusting for sociodemographic variables only, clinical N stage, clinical T stage, overall TNM Classification of Malignant Tumors (TNM) stage, surgical margins, base of tongue subsite, ECE status, HPV status, volume of cases, and year of diagnosis were associated with the type of adjuvant therapy received (likelihood ratio test (LRT) p < 0.05 for each).
The multivariable proportional odds’ model showed a decrease in odds of adjuvant therapy as diagnosis year increased (OR: 0.93, 95% CI: 0.89, 0.96). Compared to negative ECE, patients with positive ECE was more likely to receive adjuvant therapy (OR: 6.06, 95% CI: 5.03, 7.3). Positive margins were associated with increased likelihood of adjuvant therapy (OR: 2.28, 95% CI: 1.81, 2.88), as was positive LVSI (OR: 1.56, 95% CI: 1.3, 1.88). Patients with higher-stage disease were more likely to receive adjuvant therapy (Figure 5).
Next, we aimed to identify how the clinical and pathologic stage changed within this cohort after TORS. The N stage was pathologically upstaged in 629 (20.9%) patients (Figure 6A). The T stage was upstaged pathologically in 530 (15.8%) patients (Figure 6B). Of all clinically node-negative patients, 205 (25.3%) were upstaged to pathologically node-positive. The greatest change in stage occurred in patients who were clinically N1, of which 368 (50.3%) were upstaged to N2 or greater (Figure 6A). Pathologic downstaging was uncommon, with the N stage down staged in only 218 (7.2%) of patients and the T stage down staged in 324 (10.8%) patients.

The National Cancer Database (NCDB) is a joint project of the Commission on Cancer (CoC) of the American College of Surgeons and the American Cancer Society. The CoC’s NCDB and the participating hospitals were the sources of the de-identified data used herein; they did not verify and are not responsible for the statistical validity of the data analysis or the conclusions derived by the authors. Data within the NCDB include basic demographics, cancer staging, comorbidities, therapies delivered during the first course of treatment, and OS. The NCDB does not capture disease recurrence or salvage therapies.
The NCDB was queried to identify patients with newly diagnosed AJCC seventh edition clinical T1-T4, N0-N3 OPSCC treated with TORS between 2010–2016. We included patients who were ≥18 years of age with a diagnosis of squamous cell carcinoma of the base of tongue or tonsil. Patients with any non-metastatic stage were included in the analysis. Primary site codes for tonsil were “C024”, “C090”, “C091”, “C098”, and “C099”. The primary site code for base of tongue was “C019”. Determination of the use of TORS was based on surgical approach being categorized as “Robotic”. Patients were excluded for the following reasons: (1) Unknown clinical T or N stage, (2) unknown pathologic T or N stage, (3) the presence of metastatic disease; (4) if surgical margin status was unavailable, (5) if radiation was given to an area other than the head and neck, (6) if details regarding the administration of chemotherapy were unavailable, and (7) to ensure that the selected patients had a true oncologic resection, we excluded patients who had a biopsy alone. We also included patients only with surveillance, epidemiology, and end results (SEER) surgery codes that indicated an oncologic resection (pharyngectomy or radical pharyngectomy), which included 30, 31, 32, 40, 41, 42, 50, 51, 52, and 90. A patient was considered to have a negative margin if all margins were grossly and microscopically negative and there was no tumor on the inked margin of resection. A margin was considered positive if there was microscopic or macroscopic residual tumor.

Patient characteristics were summarized using frequency and percent for categorical variables and the median and interquartile range for numeric variables. Categorical variables were compared with McNemar’s test for paired data. Center volume was defined as the mean number of cases treated per year. The univariable relationship between center volume and the binary outcome variables’ adjuvant status and surgical margin were assessed with logistic mixed models. OS was defined as the time, in months, between the date of diagnosis and the date of death, and censored at the date of last follow-up for those still alive. Hazard ratios and their two-sided confidence intervals were calculated using Cox proportional hazards regression models. Adjuvant therapy was modeled using proportional odds regression models. Relationships with radiation dose (50–70 Gy) were summarized using truncated linear regression models. All regression models utilized complete case analysis. Potential explanatory variables were selected based on literature review and clinical experience. Explanatory variables included in the final multivariable regression models were chosen based on prespecified clinical significance (HPV status, adjuvant status, surgical margins) and the reliability of each variable’s importance ranking, based on its fraction of explainable outcome variation (partial chi-square), across bootstrap re-samples. Among the set of sociodemographic explanatory variables (age, sex, race, insurance status, and median income) the least reliable variable was removed from each final multivariable model. Among the set of clinical explanatory variables (extracapsular extension (ECE), lymphovascular space invasion (LVSI), T stage, N stage, overall stage, Charlson comorbidity score), those which had nonsignificant partial chi-square values or poor reliability were removed from the model. A two-sided p-value of less than 0.05 was considered to indicate statistical significance. Statistical analysis was conducted using R (version 3.6.3) with the survival (version 3.1-12), rms (version 5.1-4), and lme4 (version 1.1-23) packages.

In conclusion, our study shows that TORS is becoming more prevalent nationally in the treatment of OPSCC. However, the use of TORS also is associated with a higher likelihood of adjuvant treatment (either RT alone or chemoRT). Better patient selection through improved imaging may allow us to differentiate a subset of patients unsuitable for TORS, particularly for those with extra-nodal extension, thereby sparing the toxic effects of multimodality treatment. 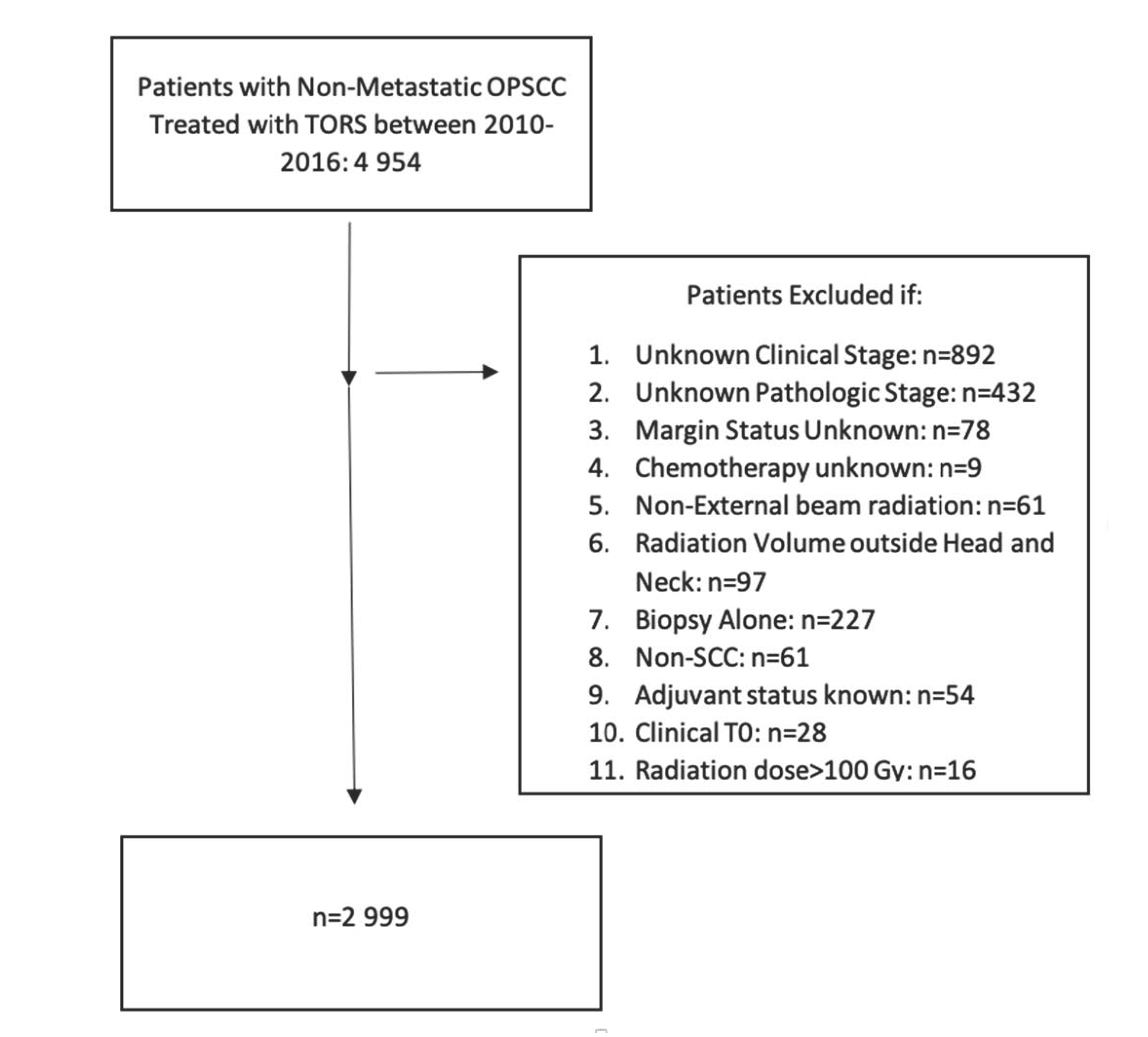 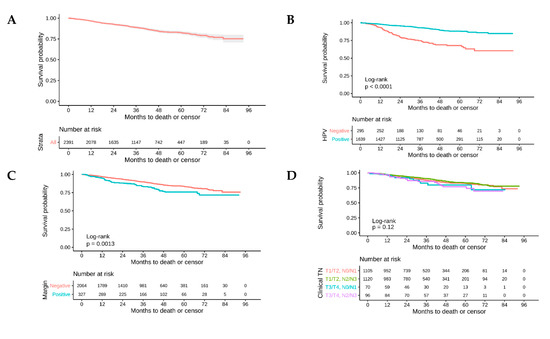 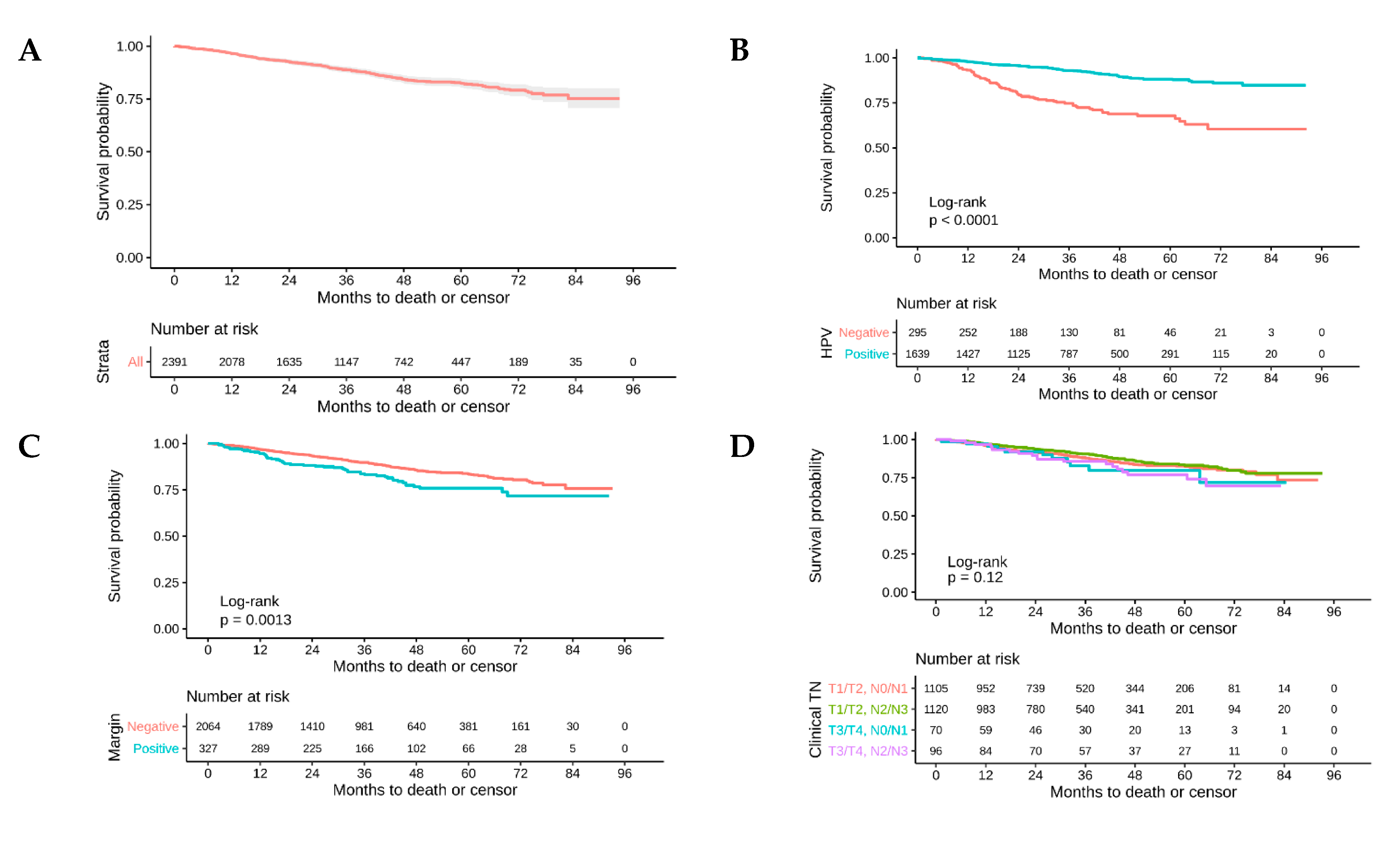 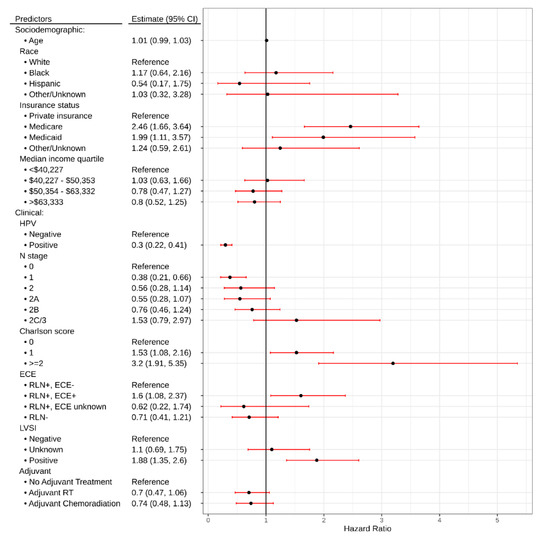 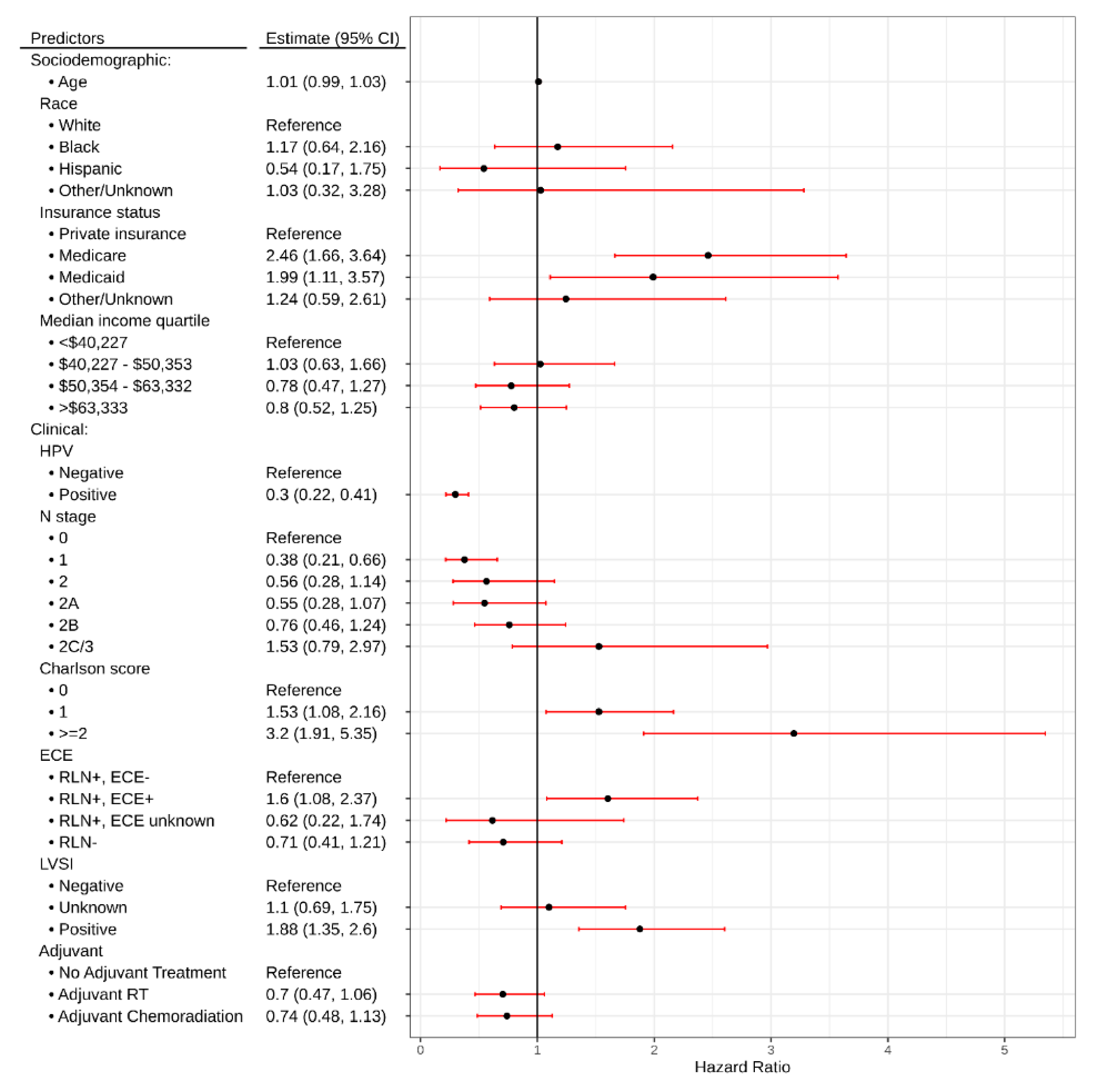 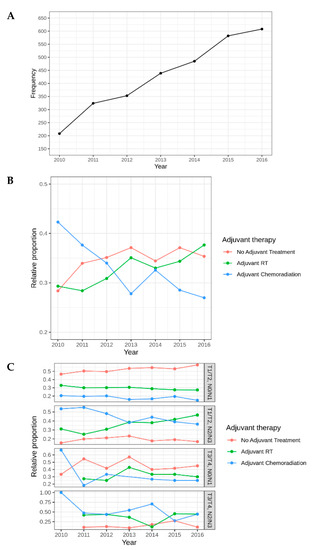 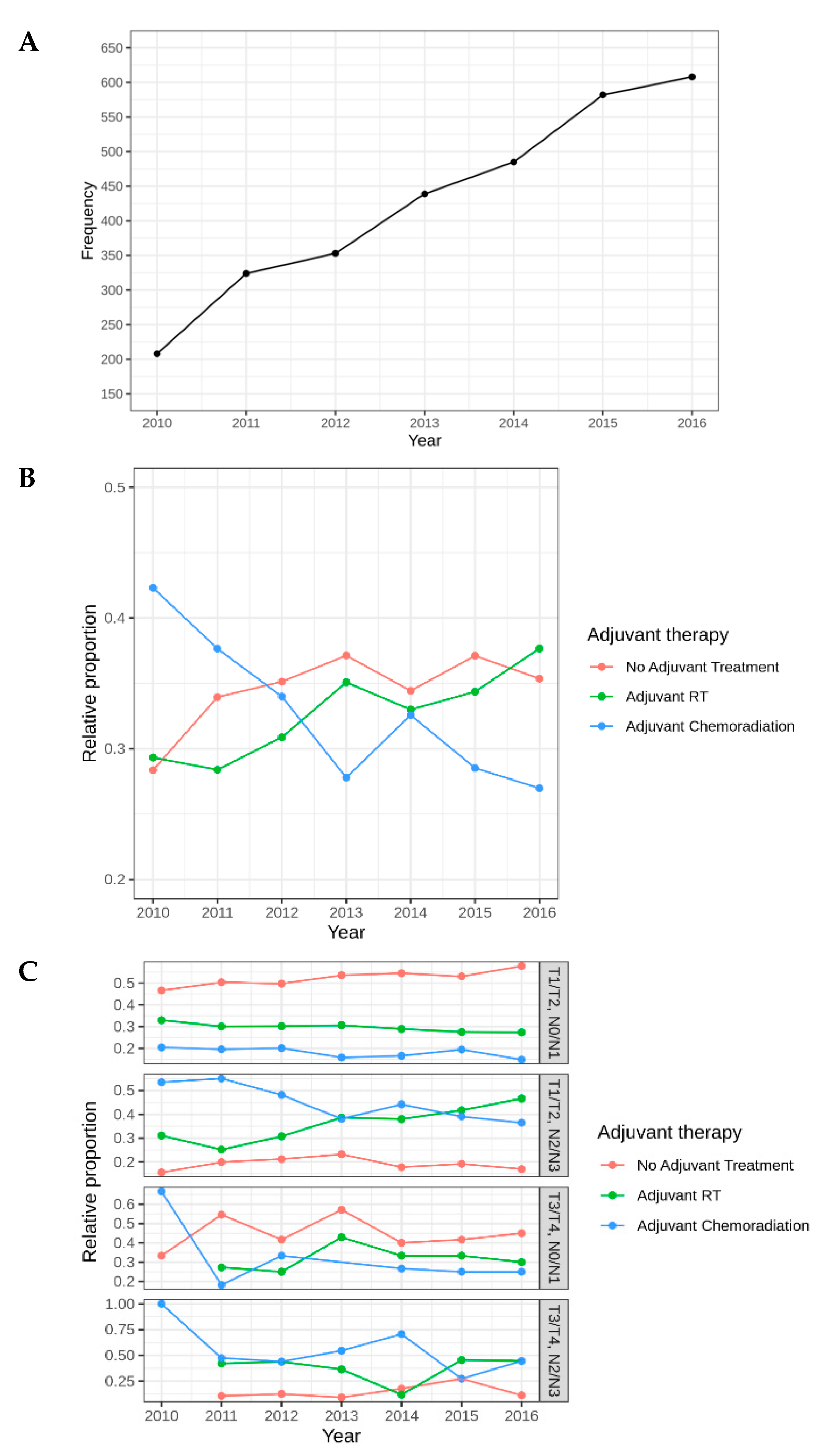 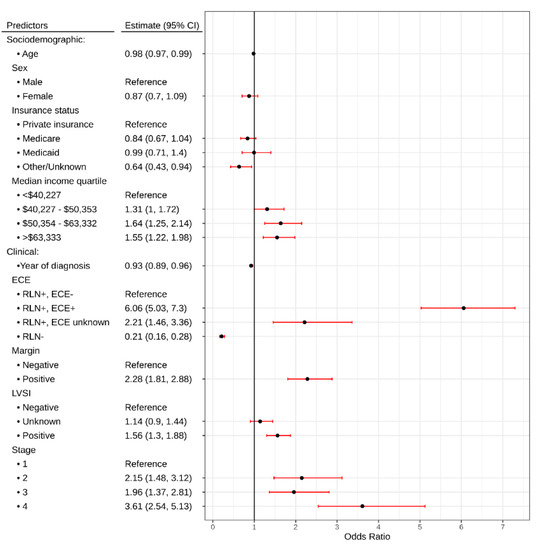 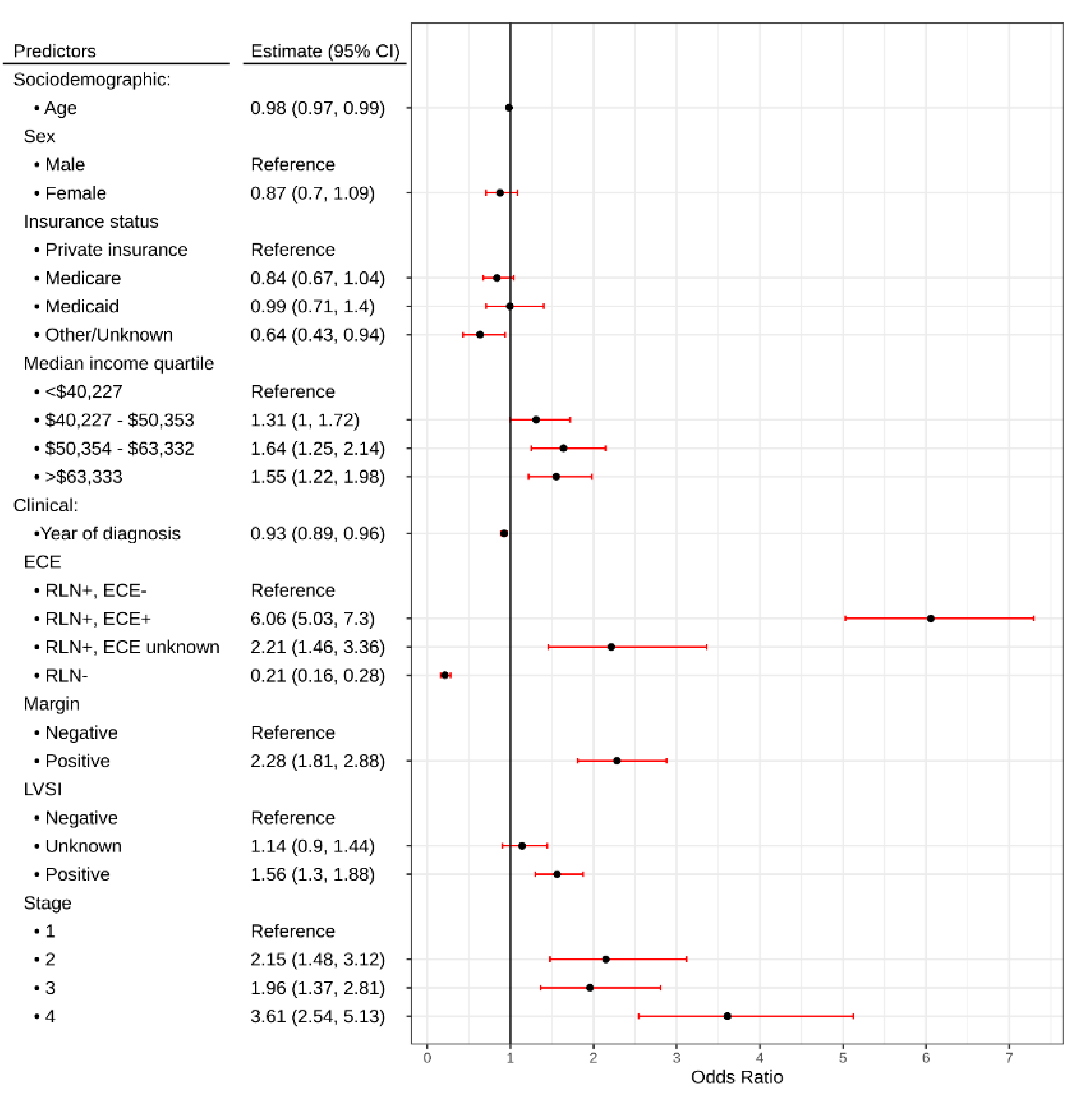 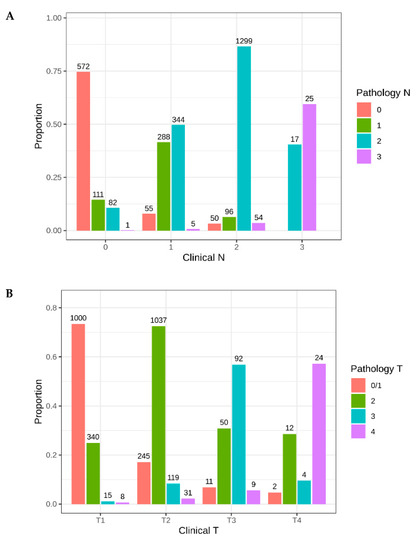 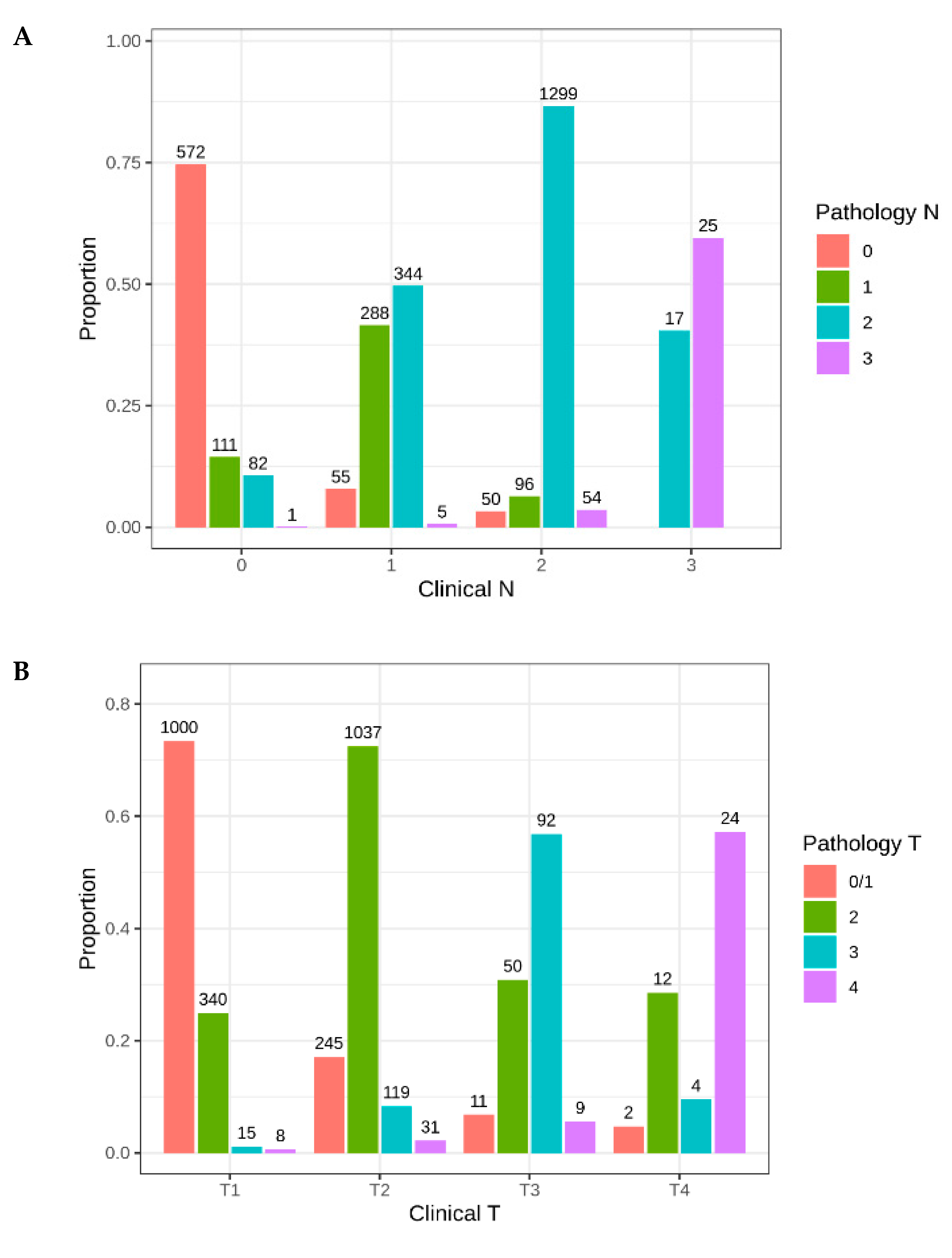