Next Generation Sequencing in MPNs. Lessons from the Past and Prospects for Use as Predictors of Prognosis and Treatment Responses

Elevated body mass index (BMI) is a global health problem, leading to enhanced mortality and the increased risk of several cancers including essential thrombocythemia (ET), a subtype of the Philadelphia-chromosome negative myeloproliferative neoplasms (MPN). Furthermore, evidence states that BMI is associated with the severity of symptom burden among cancer patients. MPN patients often suffer from severe symptom burden. The purpose of this study was to examine whether deviations from a normal BMI in an MPN population are associated with higher symptom burden and reduced quality of life (QoL). A combined analysis of two large cross-sectional surveys, the Danish Population-based Study, MPNhealthSurvey (n = 2044), and the international Fatigue Study (n = 1070), was performed. Symptoms and QoL were assessed using the validated Myeloproliferative Neoplasm Symptom Assessment Form (MPN-SAF). Analysis of covariance was used to estimate the effects of different BMI categories on symptom scores while adjusting for age, sex, and MPN subtype. A U-shaped association between BMI and Total Symptom Burden was observed in both datasets with significantly higher mean scores for underweight and obese patients relative to normal weight (mean difference: underweight 5.51 (25.8%), p = 0.006; obese 5.70 (26.6%) p < 0.001). This is an important finding, as BMI is a potentially modifiable factor in the care of MPN patients.
Keywords: Philadelphia-negative myeloproliferative neoplasms (MPN), body mass index; symptom burden; quality of life; chronic inflammation Philadelphia-negative myeloproliferative neoplasms (MPN), body mass index; symptom burden; quality of life; chronic inflammation

Body mass index (BMI) is a key global health issue worldwide, as the prevalence of obesity has increased to a pandemic extent, and obesity has become one of the leading risk factors for premature death [1,2]. Furthermore, comprehensive research documents an association between obesity and the increased risk of multiple adverse health outcomes [3] including diabetes, cardiovascular diseases [2,3,4,5,6], and several common cancers (e.g., colon cancer, gastric cancer, breast cancer) [7,8,9,10]. Interestingly, recent studies indicate that obesity might increase the risk of essential thrombocythemia (ET), a subtype of the myeloproliferative neoplasms, as well [11,12,13,14,15]. Besides ET, Philadelphia-negative myeloproliferative neoplasms (MPN) encompass polycythemia vera (PV), myelofibrosis (MF), and MPN unclassified (MPN-U). They are acquired clonal hematologic cancers characterized by a state of chronic inflammation [16,17]. Through their lifelong course of disease, MPN patients are at risk of developing splenomegaly, vascular complications, bone marrow failure and progressing to acute myeloid leukemia [18], and in their daily lives, the patients often suffer from debilitating symptoms including fatigue, pruritus, abdominal discomfort, night sweats, and early satiety [19]. Inflammation may represent a key component in several of these symptoms [20]. Like MPN, obesity is known to trigger a state of chronic inflammation with elevated levels of pro-inflammatory cytokines [21,22,23,24,25,26,27], but how obesity affects symptom burden among MPN patients is largely unknown [28,29,30,31]. However, a broad body of literature evidences that an elevated BMI is associated with increased symptom burden and reduced health-related quality of life (HRQoL) [32,33,34,35,36,37,38,39,40]. Bearing in mind the rapidly increasing prevalence of obesity and the multiple adverse effects of MPN symptoms such as compromised social functioning, physical activity, self-reliance, productivity, and reduced quality of life, it is paramount to gain further knowledge in an MPN context [19,41]. Accordingly, the aim of this study is to examine the association between BMI and symptom burden and quality of life, respectively.

A comprehensive analysis of data from two large cross-sectional surveys of health-related quality of life in MPN patients was done by combining data from the Danish Population-based Study, MPNhealthSurvey (n = 2044) [104], with data from the international Fatigue Study (n = 1040) [28]. Both surveys are described in detail elsewhere, but in brief, the MPNhealthSurvey is a Danish nationwide population-based survey, where patients with an MPN diagnosis registered in the Danish National Patient Register (NPR) between 1977 (at the time of NPR initiation) and March 31, 2013, and who were alive on September 4, 2013, when the survey population was formed, were invited to participate [105]. The invitations were sent on September 11, 2013, and the survey period ended December 31, 2013. Patients were asked to complete a survey booklet received by mail or complete the same survey online. Information on addresses, age, and sex was retrieved from the Danish Civil Registration System [106]. The Fatigue Study is a comprehensive internet-based survey developed by MPN investigators and patients at the Mayo Clinic Survey Research Center. The survey was available online via multiple MPN-related web sites including MPN Voice, MPN Research Foundation, the MPN Forum, and their respective Facebook pages from late February to March of 2014. Participants were self-identified MPN patients who understood written English with the majority of participants residing in the US (65%).
The MPNhealthSurvey was approved by the The Danish Data Protection Agency (SJ-RO-02). In Denmark, approval from the National Committee on Health Research Ethics is not required for questionnaire studies (Committee Act section 14, 2) [107]. The completion of the survey was deemed as an agreement of consent from the respondents. The Fatigue Study was approved by The Mayo Clinic Institutional Review Board and the Ethics committee, as an online minimal risk study, patients completed a modified consent before accessing the survey. Both studies were conducted in accordance with the Declaration of Helsinki.

In both surveys, symptom burden and quality of life were assessed utilizing the validated Myeloproliferative Neoplasm Symptom Assessment Form (MPN-SAF) in conjunction with the Brief Fatigue Inventory (BFI) [42]. Patients reported 18 MPN-related symptoms (worst fatigue (BFI score), early satiety, abdominal pain, abdominal discomfort, inactivity, concentration problems, dizziness, numbness, insomnia, sad mood, sexuality problems, cough, night sweats, itching, bone pain, fever, weight loss, and quality of life) on a scale of 0 (absent) to 10 (worst imaginable). For participants completing at least 6 of the 10 most representative MPN-SAF symptoms, a Total Symptom Score (TSS) was calculated by multiplying the average score across items by 10 to achieve a scaled score of 0 to 100 [43]. In addition, both surveys included questions regarding educational level and lifestyle factors such as tobacco use, alcohol intake, and physical activity. Furthermore, participants reported their current height and weight. BMI was calculated, and patients were split into underweight (<18.5), normal weight (18.5–24.9), overweight (25.0–29.9) and obese (≥30) in consensus with the prevailing WHO guidelines [108].

We evaluated the associations of BMI both by study and combined. Kruskal–Wallis tests for continuous variables and chi-squared test and Fisher’s exact test for categorical variables. Analysis of covariance was used to estimate the effects of different BMI categories on symptom scores while adjusting for age, sex, and MPN subtype. We used locally weighted scatterplot smoothing (LOESS) to visualize the U-shaped BMI associations. All statistical testing was two-sided with a significance level of 0.05. The R (R Foundation for statistical computing, Vienna, Austria) statistical software was used within an accountable data analysis process [109].

We found a U-shaped relationship between BMI and total symptom burden, several single symptoms and not least QoL; a pattern that was consistent across countries and remained significant after adjusting for age, sex, and MPN subtype. Despite medicinal treatment, symptom burden remains a challenge, and due to the chronic nature of MPNs, patients may face several years of disabling symptoms and impairment in quality of life. Furthermore, underweight and obesity is often associated with elevated inflammatory levels and inferior survival. Recently, non-pharmacologic interventions targeting chronic inflammation have shown promising results. Bearing in mind that confounders may be present, the association between BMI and symptom burden is a critical finding, as BMI is a modifiable factor in the care of MPN patients with the potential of safe interventions to contribute to reduced symptom burden and improved QoL among MPN patients. Our findings need to be confirmed in future studies, and the impact of non-pharmacologic treatment modalities such as nutrition, weight alteration, and exercise as an adjunctive therapeutic strategy to diminish symptom burden in MPN need to be investigated in future trials.

We wish to thank all the MPN patients who participated in the Fatigue Study and the MPNhealthSurvey.

R.M.: Consultant—Novartis, Sierra, Blueprint, La Jolla; Research Support—Incyte, CTI, Celgene, Abbvie. R.M.S.: Employment—Incyte. The funders had no role in the design of the study; in the collection, analyses, or interpretation of data; in the writing of the manuscript, or in the decision to publish the results. 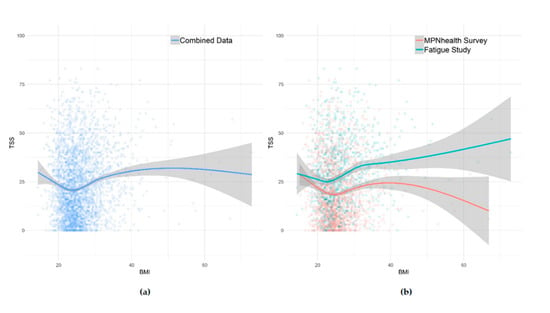